Twin Peaks: the Return episodes 1-4 recap – so far, so wayward

David Lynch’s game-changing TV mystery show Twin Peaks is back on our screens after 26 years – and on the evidence of the first episodes, it’s a shiftier beast than ever. Join the investigation with an in-depth look at the first four instalments. 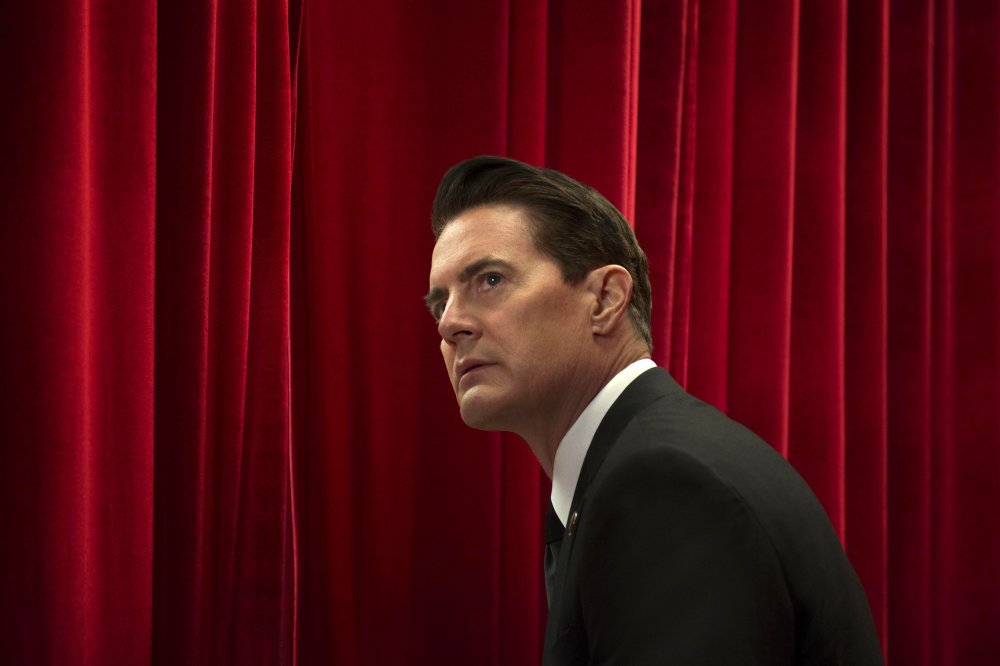 “I learned that just beneath the surface there’s another world, and still different worlds as you dig deeper. I knew it as a kid, but I couldn’t find the proof.”

David Lynch’s heroes are always searchers: lawmen, travellers, amnesiacs, prophets, detectives (and/or perverts). The original, two-season Twin Peaks, broadcast from 1990-91, was all about the search: not just to find out who murdered high school prom queen Laura Palmer, but to learn what was really going on beneath the veneer of small-town life, and of reality itself. The point was never to find answers though – the show was almost ruined when network executives insisted on revealing the killer. The point was to ask the right questions, to locate and explore strange worlds both within and without, to dig and keep digging.

And now, a quarter of a century later, the investigation is back on. This time the questions aren’t nearly so clear, the path is murky and the searchers themselves have become corrupted, warped by age and ambiguity. But the journey is what matters. Twin Peaks: the Return is not a TV series: Lynch and his writing/producing partner Mark Frost have been very clear on that. It is the latest – and very possibly the last – David Lynch movie, a singular 18-hour experience that just happens to have been split it up into pieces. There’ll be no network interference this time, no second-string writers and directors watering down the coffee. This is the strong stuff, served black as midnight on a moonless night. Pure Lynch – with just a touch of Frost.

When we last saw FBI Agent Dale Cooper (Kyle MacLachlan) – or rather when we last heard from him, via a time-warped transmission delivered by Cooper’s partner Annie (Heather Graham) to a terrified Laura Palmer (Sheryl Lee) in dizzying prequel movie Twin Peaks: Fire Walk with Me – he was trapped in the Black Lodge, a red-curtained purgatory that exists “beyond life and death”. And that’s where we find him in The Return, following a 25-year psychedelic incarceration that seems to have broken his mind entirely. Meanwhile, Cooper’s evil doppelganger or “shadow self” – who escaped the Lodge at the close of the original series – has been on a criminal rampage across the US, living off the grid under the name Mr C (stop sniggering, 90s rave kids). 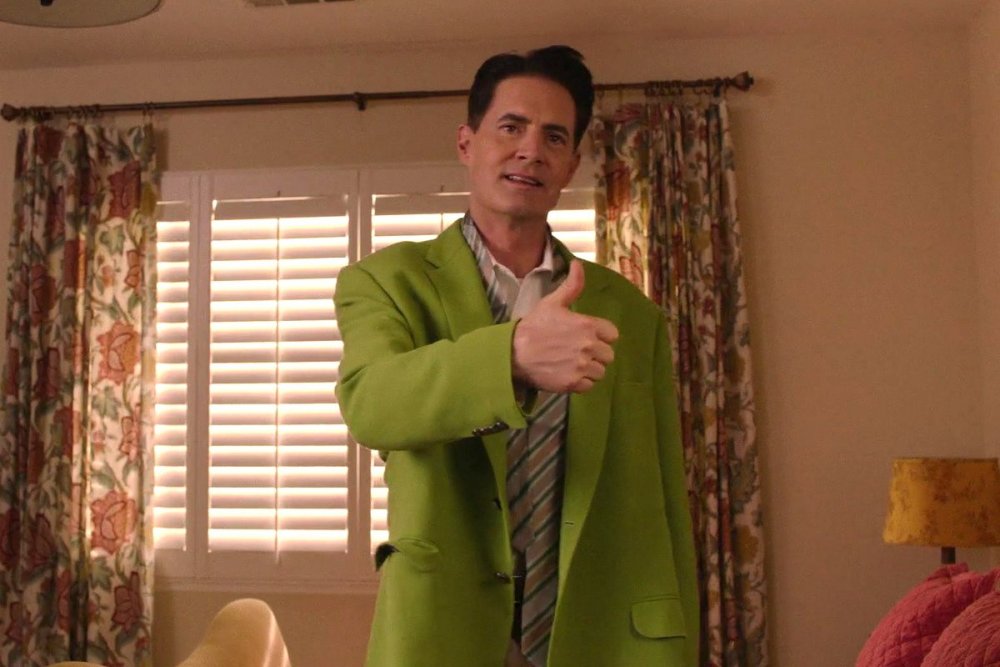 How this all ties into a headless homicide in Buckhorn, South Dakota – apparently carried out by schoolmaster Matthew Lillard, but possibly staged by his jealous wife – a mysterious scientific study funded by a New York billionaire or the concerns of a twitchy Las Vegas casino manager (Mulholland Dr. dreamer Patrick Fischler) is still not entirely clear. But the amount of time spent outside the town of Twin Peaks and the familiar Black Lodge is the first and most striking difference between The Return and the original series.

In fact, these first four episodes pay only passing visits to Twin Peaks itself, dropping in on familiar characters such as the West Side Story boys Ben Horne (Richard Beymer) and Dr Jacoby (Russ Tamblyn) as they go about their daily routines, chatting about hash brownies and hotel management, and for some reason spray-painting shovels. These scenes are beautiful – the episode 2 closer in the Roadhouse, as Shelley (Madchen Amick) and James (James Marshall) exchange glances across a crowded bar, is completely heartbreaking, despite the troubling appearance of a stray Cockney geezer (“It’s the dog’s bollocks, this place!”). But they do feel like asides, house-calls paid on old friends while the real action occurs elsewhere.

That’s less the case with the sequences set in the old Sheriff’s Station, where Deputy Chief Tommy ‘Hawk’ Hill (Michael Horse), less than ably assisted by Deputy Andy (Harry Goaz) and scatterbrained receptionist Lucy (Kimmy Robertson), is digging back into the old Laura Palmer case at the urging of Margaret Lanterman, the Log Lady (Catherine Coulson, whose scenes were shot shortly before she died of cancer in 2015). The whispered telephone conversation between Hawk and Margaret is the series’s first unforgettable moment, a meeting of kindred spirits each on the verge of great and terrible discoveries. 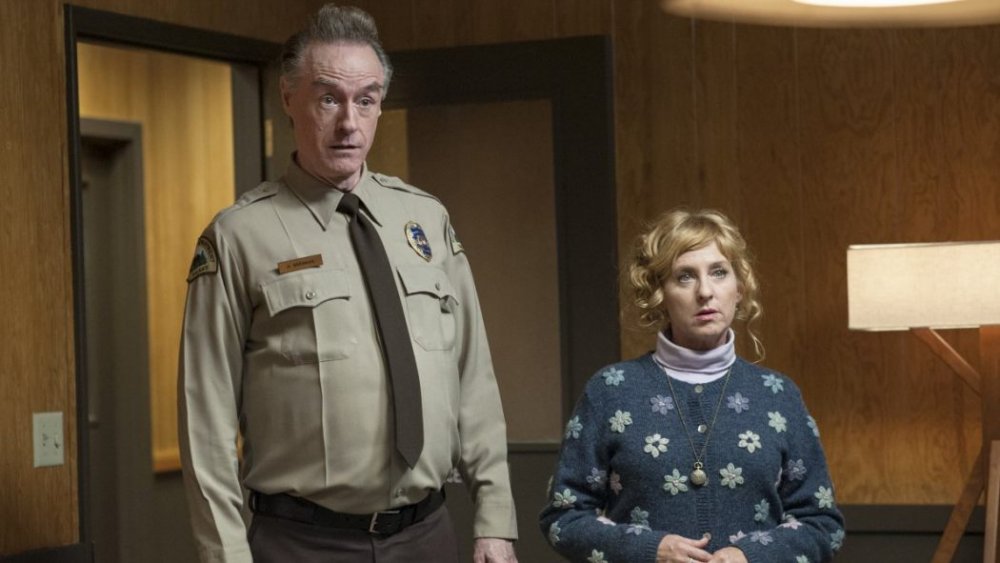 Not that these episodes offer any shortage of exceptional moments: the savage murder-by-ghost of two innocents in a New York loft; Laura’s angelic act of self-inflicted facial surgery; the unearthly transcendence of a nameless prison inmate. Lynch has always been a great director of actors, and there are a handful of scenes that match the Mulholland Dr. audition for unadorned intensity – Lillard’s snarling face-to-face confrontation with his devious spouse showcases depths that the Scream star had never hinted at before; MacLachlan’s triple turn swings from assault-and-battery to light slapstick without missing a beat; and love it or hate it, Michael Cera’s appearance as baby-faced Wally ‘Brando’ Brennan is a masterclass in comic timing (“sometimes to the left of me… sometimes to the right…”).

Predictably, The Return refuses to deliver the cosy pleasures some old-school fans might’ve been hoping for – this is an altogether shiftier beast, haunting and beautiful when it wants to be; ugly and aggressively off-putting when it doesn’t (we know now why Showtime’s initial estimate of nine episodes was later doubled – The Return moves at approximately half the speed of most TV). But we mustn’t forget that Lynch himself is one of those fans – he, too, was dying to see what might have happened, in a quarter century, to the town he loves. As the series unfolds, expect the Twin Peaks scenes to become increasingly entangled with the more wayward plot threads – there’s no way we won’t see Cooper driving past that iconic road sign, beneath the Douglas firs. Who exactly will be occupying his body when he does so is harder to predict.

Connective tissue: back to Lynch’s roots? 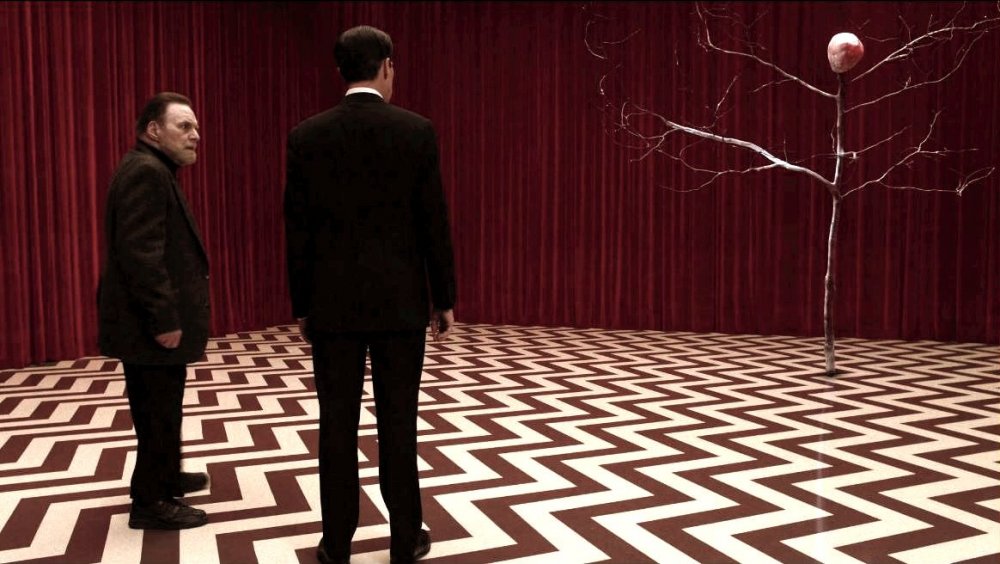 In the Red Room with The Arm

“When two separate events occur simultaneously pertaining to the same object of inquiry, we must always pay strict attention.”

Like Inland Empire, David Lynch’s most recent film, The Return reflects the strange circularity of his creative path: in his later years the director has wandered out of the mainstream he navigated in Blue Velvet and Wild at Heart and back towards the intensely personal avant-garde explorations of The Grandmother and Eraserhead. But The Return contains nods to almost everything Lynch has ever done: as well as representing a giant fuck-you to diminutive star Michael J Anderson, whose public attacks on the director have become increasingly berserk in recent years, the figure of The Arm clearly harks back to Lynch’s work as an artist – a sketchy, stick-like figure topped with a fleshy, erupting brain.

The floating head of Major Briggs (Don S. Davis, deceased) directly echoes Eraserhead, while the snarling Mr C and his cast of sniggering underworld sidekicks are straight out of Blue Velvet via Lost Highway. And don’t the interlocking steel panels in the mysterious glass box look exactly like those found on the Guild Navigator’s breathing tank in Dune? All that’s missing so far is the raw, unabashed emotional intensity of The Elephant Man and Fire Walk with Me, but there are still 14 hours to go. 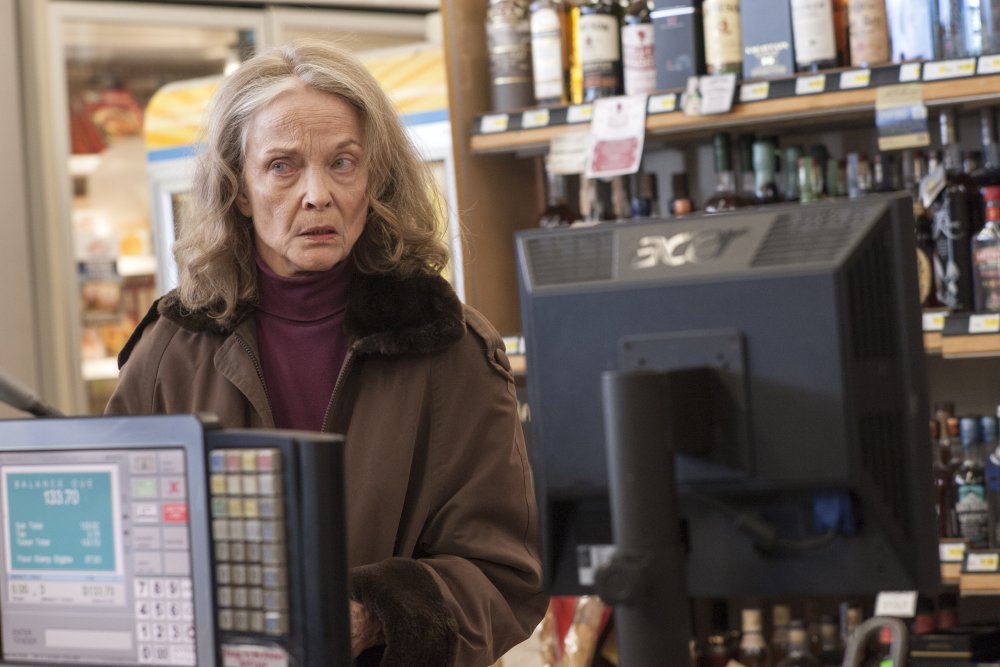 “It makes me uncomfortable to talk about meanings and things. It’s better not to know so much about what things mean. Because the meaning, it’s a very personal thing, and the meaning for me is different than the meaning for somebody else.”

As the above quote suggests, attempting to ‘read’ Lynch can be a hiding to nothing – the ultimate transcendentalist, he values raw sensation over dry and obvious ‘meaning’. But this is the 21st century, so inevitably the internet is already ablaze with theories and predictions. Some are hard to refute – the first episode’s focus on a young man staring at a glass box waiting for anything to happen has to be a sly comment on the process of watching television (the fact that something later emerges from it and tears his face off may be the Lynch equivalent of political satire). As many have spotted, in Mr C’s first encounter with Gordon Cole (Lynch), he briefly speaks backwards: “It’s yrev, very good to see you old friend”, surely a hint to Cole that he’s not who he appears to be.

Other theories feel a tad more far-fetched: could Audrey Horne (Sherilyn Fenn) turn out to be the mystery billionaire? Is the eyeless woman in Cooper’s visions the magician who “longs to see”? And is what we’re seeing really the same Twin Peaks, or does the fact that everything’s so much slower and weirder imply that the town itself has undergone some kind of seismic shift or corruption in the past 25 years? (Those nasty deputy cops surely back that theory up.)

All will probably not be revealed over the next 14 weeks, but it’s fun to speculate.

Related to Twin Peaks: the Return episodes 1-4 recap – so far, so wayward