After weeks of diversions both delightful and disheartening, David Lynch’s extraordinary series appears to be sliding towards some kind of endgame. 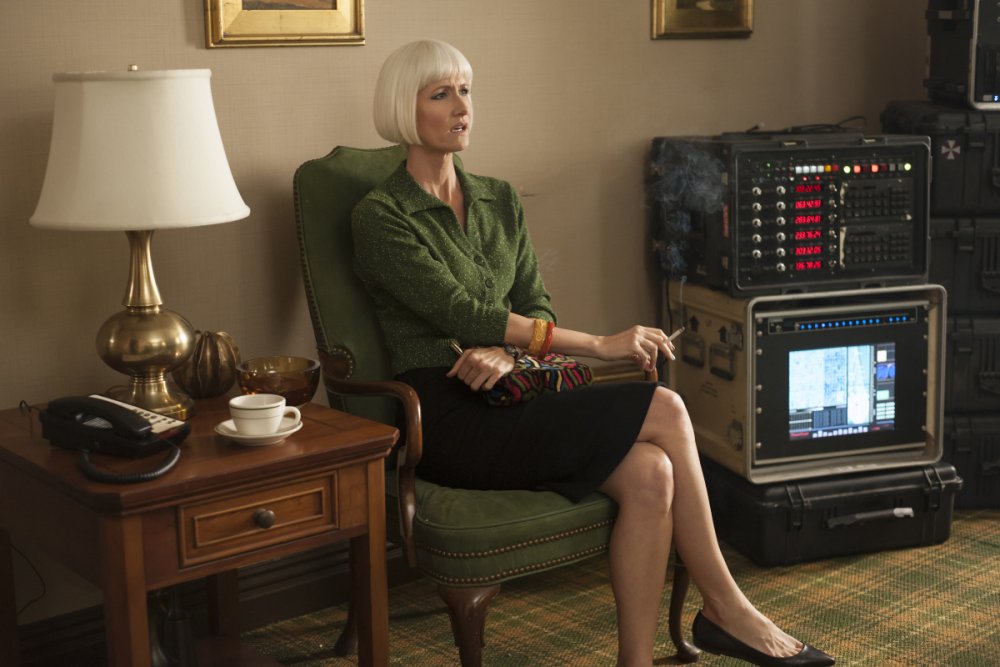 In February 1991, David Lynch held a press conference on the Great Northern Hotel set in Snoqualmie, Washington. “We’re in trouble,” he told the show’s dwindling fanbase. “We need your help.” Ratings for Twin Peaks were in freefall, with the ABC network threatening to withhold the last six episodes altogether. This is worth bearing in mind because, as ratings for Twin Peaks: The Return face a similar decline (it “almost qualifies as a disaster”, according to Newsday), there hasn’t been the slightest suggestion from Showtime that it could go off the air. There are a number of reasons for this: the entire series has already been shot and cut; the culture of TV has become more artist-friendly; loads of people watch online anyway. But we also have to recognise what an extraordinary commitment Showtime have made in producing The Return in the first place, handing millions of dollars to an avowedly uncommercial filmmaker, giving him complete artistic freedom and transmitting the results to thousands worldwide.

The irony, of course, is that just as the viewing public grows tired of The Return’s endless prevarications, it’s all starting to make some vague kind of sense. Part 13 was still fairly woolly, focusing almost exclusively on Cooper-Dougie (Kyle MacLachlan) and his devious colleague Anthony Sinclair (Tom Sizemore), as the latter assumed the task of murdering the former to placate his crime-lord bosses, and ended up confessing to everything in floods of tears. But in the same episode we saw for the first time how the Twin Peaks storylines might link into Lynch and Mark Frost’s grander scheme, as Richard Horne (Eamon Farren) appeared at The Farm in Montana, where Mr C (MacLachlan) had come to exact vengeance on his old sidekick Ray Monroe (George Griffith). 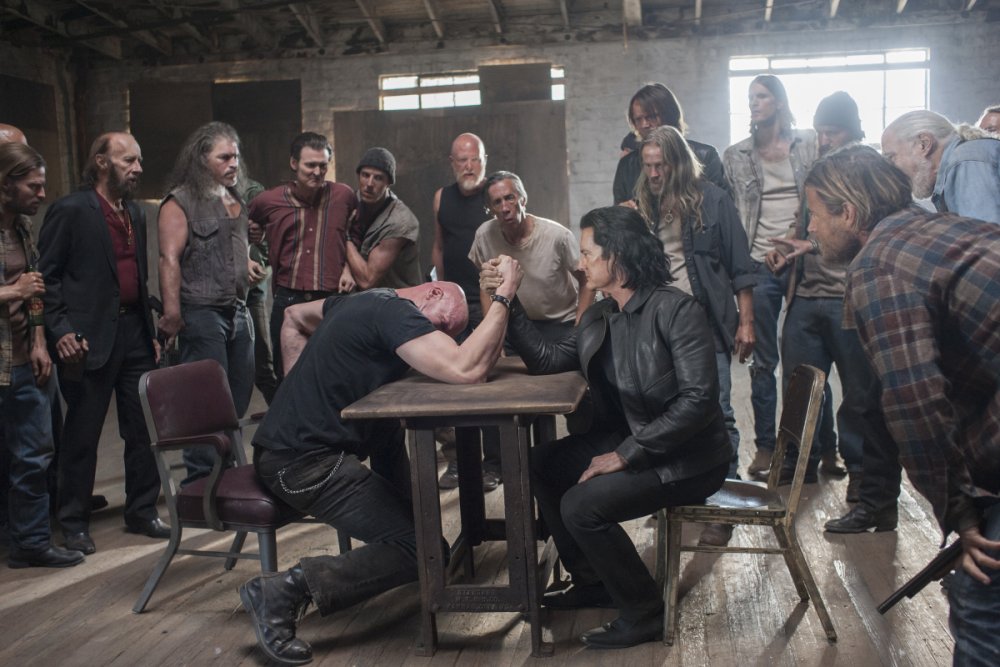 Derek Mears and Kyle MacLachlan in Twin Peaks: the Return

The ensuing arm-wrestle was a distillation of everything that makes The Return so unique: gruesome, almost wordless and still somehow very funny, slowing the pace to a crawl and letting the tension mount. If you’ve ever wondered what a Lynch-directed Jean-Claude Van Damme movie might have looked like, here it was. An episode later, we were treated to a sideways take on a more modern genre, as mockney security guard Freddie Sykes (Jake Wardle) offered an account of his run-in with the denizens of the Black Lodge that could’ve come straight from a Marvel movie, albeit one where the hero wears a green gardening glove instead of a cape.

If Part 13 balanced Las Vegas slapstick, gritty criminality and occasional Twin Peaks asides to slightly underwhelming effect, Part 14 delivered a breakneck series of plot developments, as Gordon Cole (Lynch) learned about Laura’s diary pages from Frank Truman (Robert Forster); Albert (Miguel Ferrer) revealed the history of the Blue Rose to Tammy (Chrysta Bell); Diane (Laura Dern) revealed that she’s actually related to Janey-E (Naomi Watts) and by extension Dougie Jones; Deputy Chad (John Pirucello) was arrested, presumably for his involvement in Richard Horne’s drug ring; Bobby (Dana Ashbrook) led the rest of the Sheriff’s department out to the woods where they discovered eyeless space-pilot Naido (Nae Yuuki) lying naked on the ground; Andy (Harry Goaz) was sucked into a vortex and offered visions of Cooper and his dark half, of Bob and the Experiment, of Laura and Lucy; and Sarah Palmer (Grace Zabriskie) went to a bar where she opened up her face and tore some douchebag pick-up artist’s throat out. 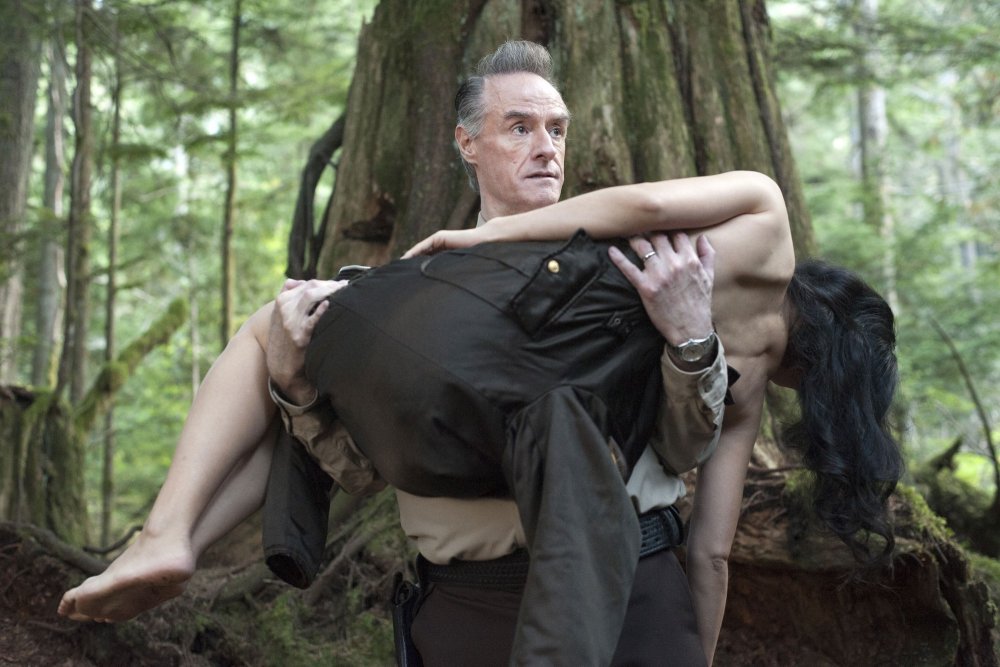 Harry Goaz as Andy and Nae Yuuki as Naido

The scene in the woods was the heart of the episode, paying gentle homage to a similar trek made by Cooper, Hawk, Truman and Doc Hayward all the way back in 1990 while weaving in elements of The Return’s own complex mythology. There was something ineffably right about seeing Andy confronting interdimensional forces, the lines in Goaz’s face beautifully stark in monochrome. The aftermath was gorgeous too, as Bobby, Frank and Hawk (Michael Horse) seemed to disintegrate and reform in the shadow of Jack Rabbit’s Palace, before Andy strode into the clearing and everything snapped into focus once more. Not everything in Part 14 worked – musical guest Lissie was genuinely atrocious – but this felt like the most focused and effective instalment in a while.

The Janey-E connection loops back to Mulholland Dr., where Naomi Watts’s character was named Diane, while Gordon’s rather wonderful Monica Bellucci dream sequence utilised scenes from Fire Walk With Me (on a side-note, is this the first time in a Lynch movie that an actor or celebrity has played themselves?). The sequence in the cells, as Naido and the bleeding drunk barked senselessly to one another, recalled the finale of the Twin Peaks pilot, as Bobby and Mike howled at poor James – who of course returned in Part 13 to croon his timeless ballad Just You to the delight and/or consternation of longtime fans.

But perhaps even more fascinating is the way The Return has begun to make and sever connections within itself, using repetition and distorted time to unnerving effect. So Sarah watches a 17-second loop of an old boxing match on TV; Bobby tells Big Ed (Everett McGill, still utterly heartbreaking) that they found a message from his dad that morning when we know that several days and nights have passed since; and Audrey (Sherilyn Fenn) and her husband Charlie (Clark Middleton) appear to be having the same conversation in Part 13 that they were having the week before.

Even the most enthusiastic online theorists seem to have given up somewhat, as the sheer dogged unpredictability of The Return – and the increasing likelihood that none of this will make sense anyway – renders their efforts increasingly futile. But there are still plenty of questions we’d love answers to, particularly around Sarah Palmer and her newfound thirst for human blood. In Part 3, Naido warned Cooper that Mother was coming – did she mean Sarah all along? Is she playing host to the Experiment, as her husband hosted Killer Bob? Either way, it was thrilling to see this fractured character stepping right into the centre of the action, fangs bared.