“That gum you like is going to come back in style…”

We celebrate a quarter-century of Twin Peaks. Plus The Red Turtle, My Life as a Courgette, François Ozon’s Frantz, Buñuel at the opera, and Daughters of the Dust and films by and about black women. 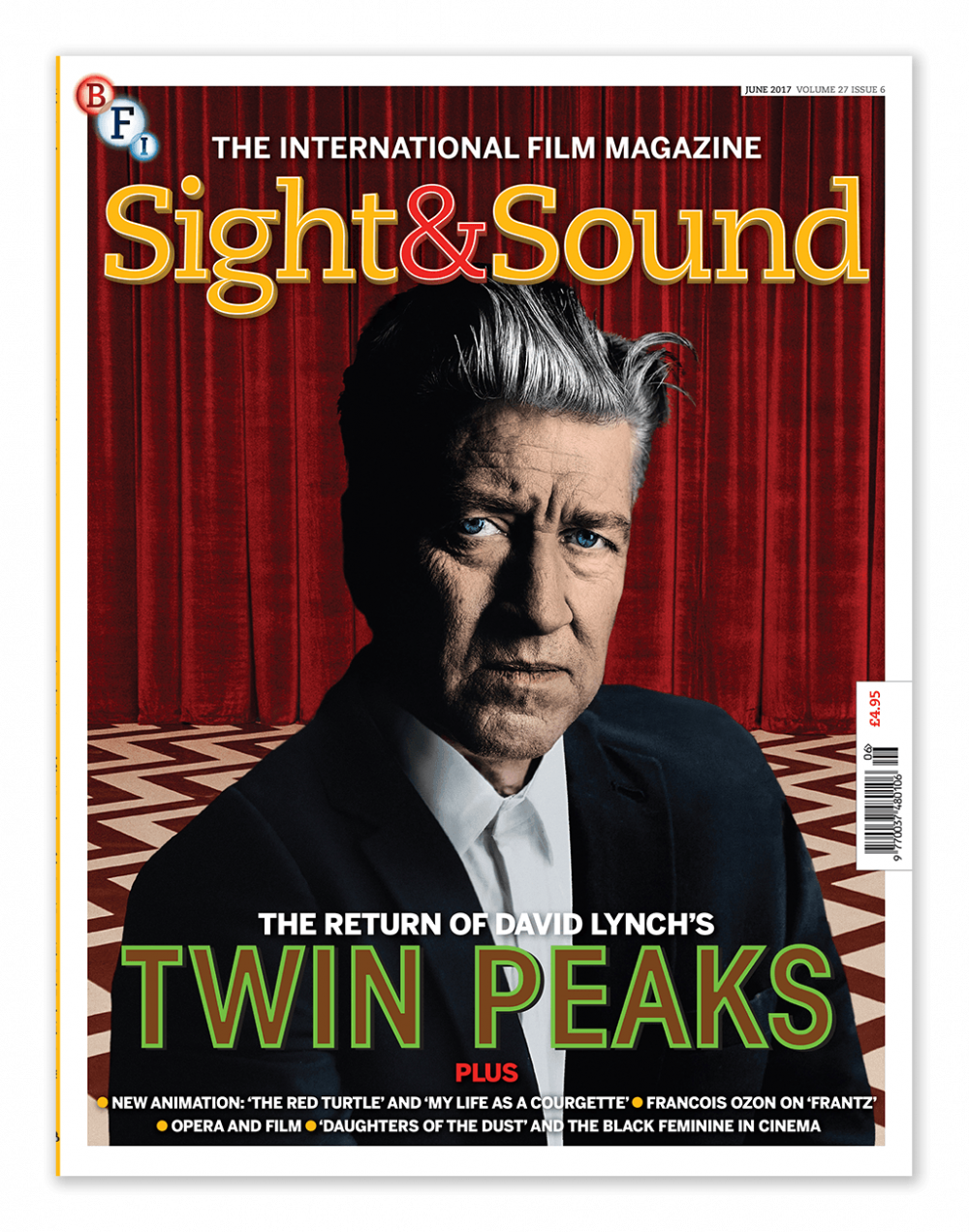 “I’ll see you again in 25 years,” says the Laura Palmer character to FBI Special Agent Dale Cooper in the haunting final episode of the second season of David Lynch and Mark Frost’s cult early 1990s TV series Twin Peaks, before clicking her fingers – backwards – and disappearing into the unsettling, red-curtained realm of the otherworldly Black Lodge.

On UK newsstands 2 May

Well, here we are – just a little over 25 years later – and as a line of dialogue from the original series had it (and which Lynch’s Twitter account tweeted to first swell fan excitement back in 2014), “That gum you like is going to come back in style”, for later this month Twin Peaks returns to TV screens for a third season.

On the eve of its highly-anticipated broadcast, Roger Luckhurst looks back at both the original series and the 1992 prequel film Fire Walk With Me to remind us just what made their genius marriage of the mundane and the macabre, the surreal and the soapy so beguiling and influential. He also explores how Twin Peaks’s eccentric world of damn fine coffee, cherry pie, small-town oddballs and terrifying murder has only been enriched and expanded in the years since through a lively afterlife in fanzines, festivals, books, blogs and videogames. Just remember to heed the advice, “The owls are not what they seem…”

Alongside Luckhurst’s piece, Ronnie Hackston considers how Twin Peaks sits in the wider Lynch universe, and finds that there are motifs and themes that recur across his work, whether in Eraserhead, Mulholland Dr., Blue Velvet or Twin Peaks, from chevron-tiled floors and red curtains to doppelgängers and split personalities.

Elsewhere in the issue, we take a look at two new films that prove that animation filmmaking is in rude health right now. The Red Turtle, British director Michael Dudok de Wit’s exquisitely animated tale of a man washed up on a desert island, has the distinction of having been initiated by Miyazaki Hayao’s Studio Ghibli company, but as Dudok de Wit explains in an interview with his son, the writer and critic Alex Dudok de Wit, The Red Turtle’s distinctive vision really lies in its fusion of Eastern and Western animation traditions.

Another unlikely juxtaposition of styles lies at the heart of French filmmakers Claude Barras and Céline Sciamma’s brilliant stop-motion animation My Life as a Courgette – that of the perceived escapism of the animated feature with the probing social realism of Ken Loach. As the filmmakers tell Kieron Corless, they felt that animation was exactly the right form they needed to tell a heartbreaking story of the losses and brutalities endured by a group of orphans in a children’s home.

One area in which the fusion of different forms has proven to be an especially rich and fruitful one is between cinema and opera. As a new adaptation of Luis Buñuel’s surreal satire of bourgeois hypocrisy The Exterminating Angel debuts at London’s Royal Opera House, Alexander Jacoby explores the long interrelationship between the two – from filmed operas by the likes of Luchino Visconti, Ingmar Bergman and Michael Powell, through to a more recent trend that has seen classics of the cinema screen in turn adapted for the stage.

We also take a look at Frantz, the new film by one of contemporary cinema’s most prolific and surprising directors, François Ozon. The French director has always shown a thirst for reinvention and that holds nowhere more true than in his latest, a stately and moving black-and-white costume drama set in the aftermath of World War I, about a French soldier who travels to Germany to visit the family of a soldier he may have killed. He talks to Trever Johnston.

Finally in this month’s features pages, and running in conjunction with our latest Deep Focus season of films at BFI Southbank, we explore the often marginalised tradition of films made by and about black women. As the season and the accompanying article explores, a distinct aesthetic binds a number of films by black female directors across the years, from Julie Dash’s breakthrough 1991 feature Daughters of the Dust to Beyoncé’s Lemonade ‘visual album’ of last year – an approach that aims to illuminate the varied experiences of black women with a rare interiority and subjectivity.

On the eve of the season, and of a re-release of a new restoration of Dash’s seminal film, Gaylene Gould talks to Dash about her life and career, while Tega Okiti introduces several of the key figures working within the tradition, from Maya Angelou to Kasi Lemmons and Dee Rees, Ngozi Onwurah to Cecile Emeke and debbie tucker green.

We also review all of the month’s new releases, including Japanese director Koreeda Hirokazu’s After the Storm, Finnish deadpan master Aki Kaurismäki’s The Other Side of Hope and exciting young British director Hope Dickson Leach’s The Levelling.

Our Home Cinema section spotlights the best new DVD and Blu-ray releases, including lavish new presentations of two of Luchino Visconti’s opulently grand late works, and in a rather different register altogether, a collection of six of Alan Bennett’s great TV plays.

The Owls Are Not What They Seem: The World of Twin Peaks 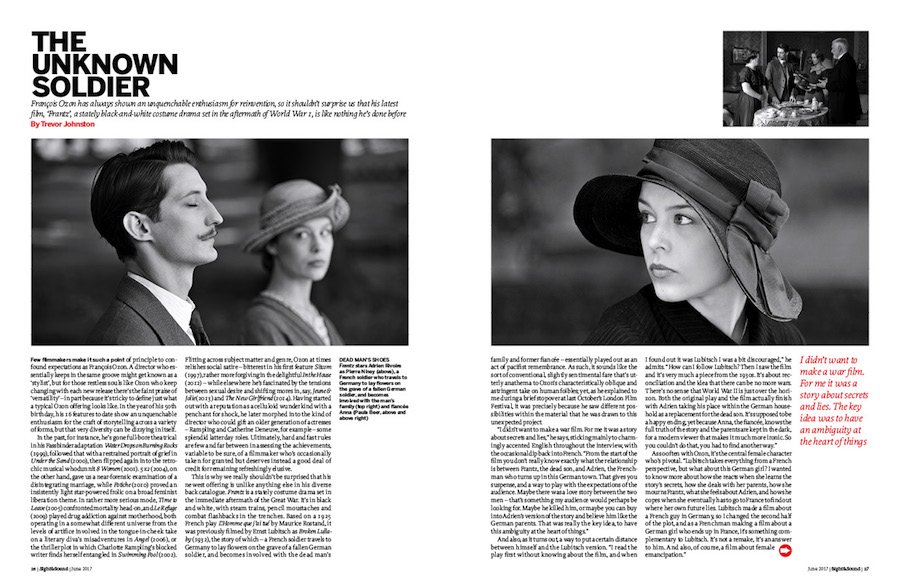 François Ozon has always shown an unquenchable enthusiasm for reinvention, so it shouldn’t surprise us that his latest film, Frantz, a stately black-and-white costume drama set in the aftermath of World War 1, is like nothing he’s done before. By Trevor Johnston. 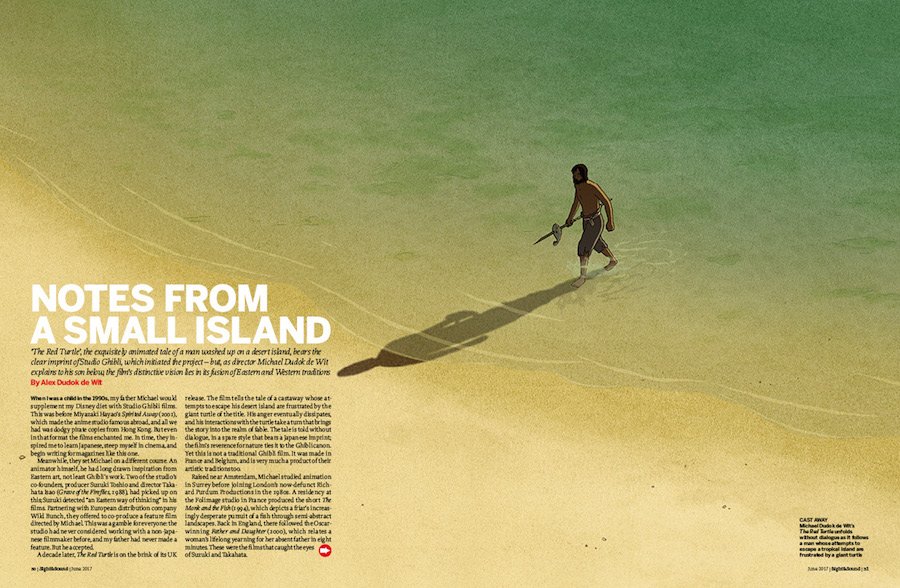 Notes from a Small Island

The Red Turtle, the exquisitely animated tale of a man washed up on a desert island, bears the clear imprint of Studio Ghibli, which initiated the project – but, as director Michael Dudok de Wit explains to his son, the film’s distinctive vision lies in its fusion of Eastern and Western traditions. By Alex Dudok de Wit. 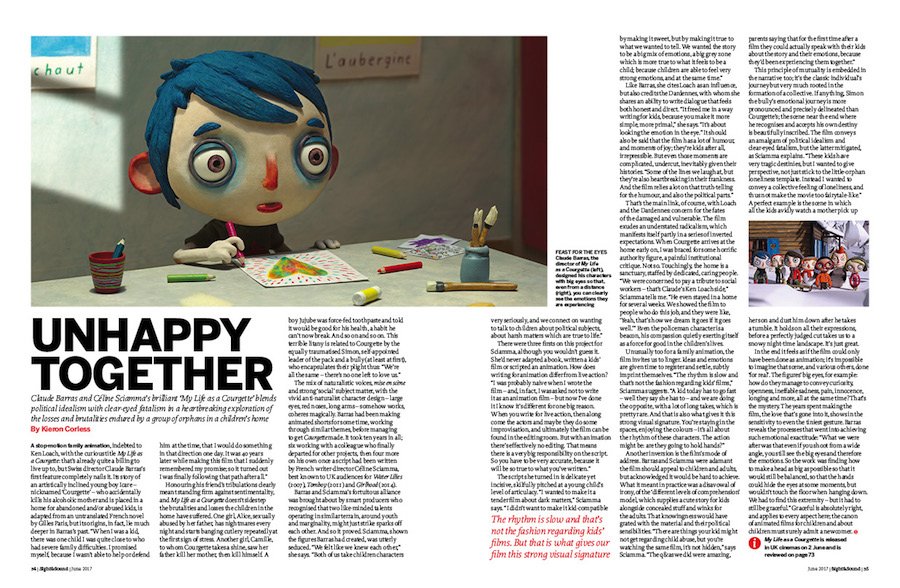 Claude Barras and Céline Sciamma’s brilliant My Life as a Courgette blends political idealism with clear-eyed fatalism in a heartbreaking exploration of the losses and brutalities endured by a group of orphans in a children’s home. By Kieron Corless. 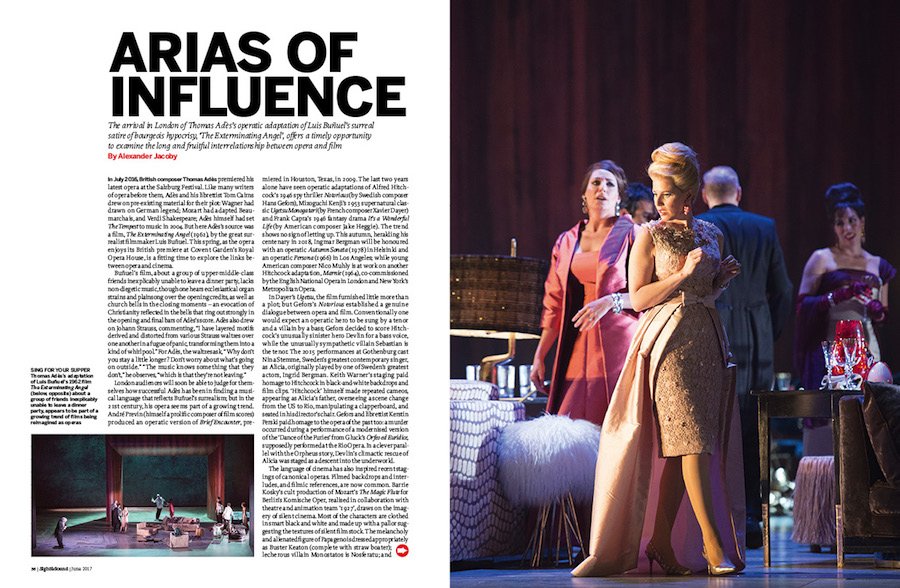 The arrival in London of Thomas Adès’s operatic adaptation of Luis Buñuel’s surreal satire of bourgeois hypocrisy, The Exterminating Angel, offers a timely opportunity to examine the long and fruitful interrelationship between opera and film. By Alexander Jacoby. 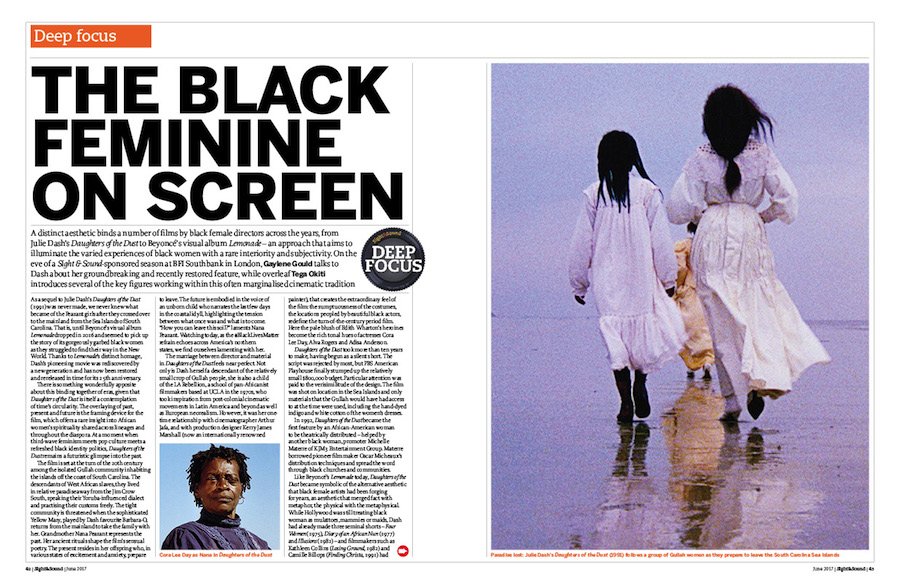 A distinct aesthetic binds a number of films by black female directors across the years, from Julie Dash’s Daughters of the Dust to Beyoncé’s visual album Lemonade – an approach that aims to illuminate the varied experiences of black women with a rare interiority and subjectivity. On the eve of a Sight & Sound-sponsored season at BFI Southbank in London, Gaylene Gould talks to Dash about her groundbreaking and recently restored feature, while overleaf Tega Okiti introduces several of the key figures working within this often marginalised cinematic tradition. 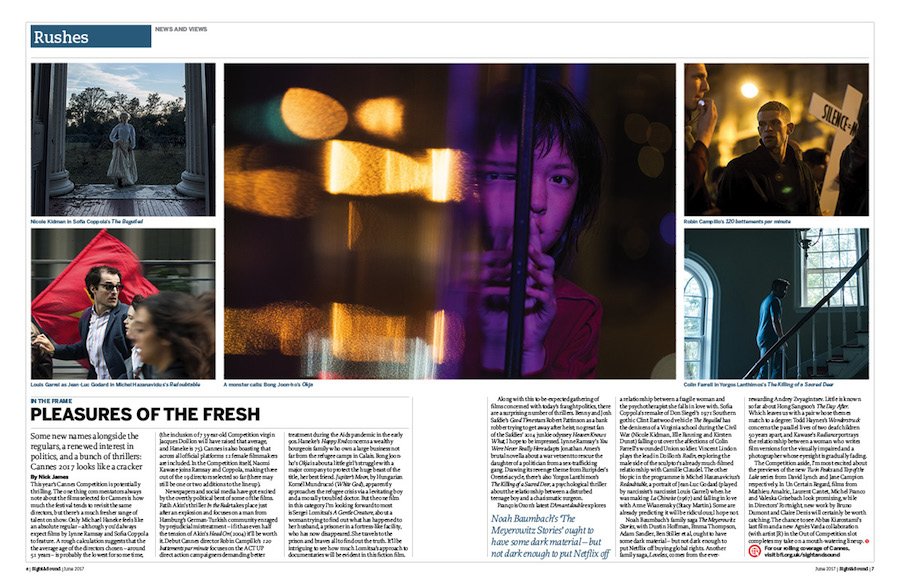 In the frame: Pleasures of the fresh

Some new names alongside the regulars, a renewed interest in politics, and a bunch of thrillers: Cannes 2017 looks like a cracker. By Nick James.

Hope Dickson Leach, director of The Levelling, talks countryside, the middle classes and combining filmmaking with parenthood. By Leigh Singer.

My Feral Heart and select British indies at the UK box office 2016-17. By Charles Gant.

Spotlight: The birth of a nationalist

Will Chez nous, about a nurse recruited by the far right in France, set the model for a new wave of topical, committed political films? By Nick Roddick.

Dispatches: In the realm of the censors

The proposal to ban films made during Albania’s communist era from the country’s television schedules must be resisted. By Mark Cousins. 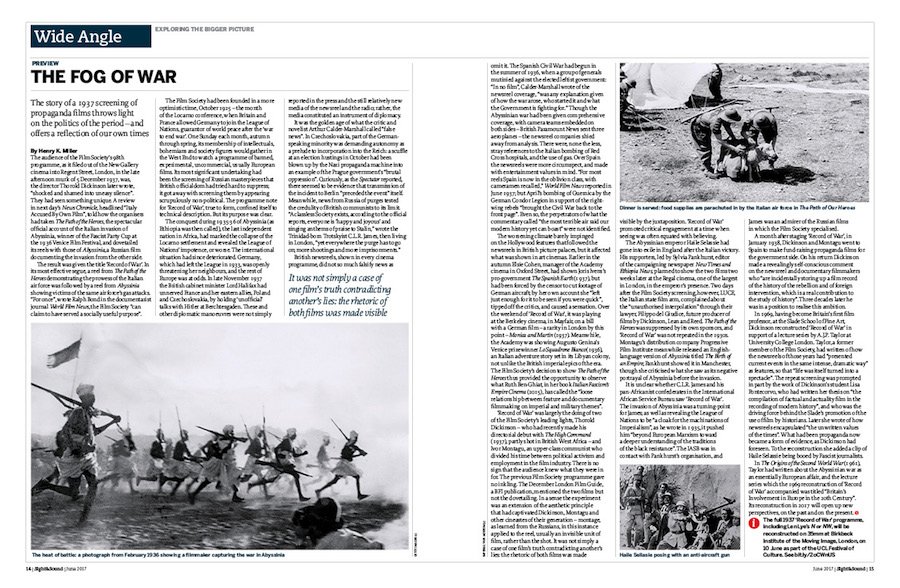 Preview: The fog of war

The story of a 1937 screening of propaganda films throws light on the politics of the period – and offers a reflection of our own times. By Henry K. Miller.

Would you have had a wager on The Wages of Fear? Turned a profit on A Prophet? You too can be a winner at Cannes. By Neil Young. 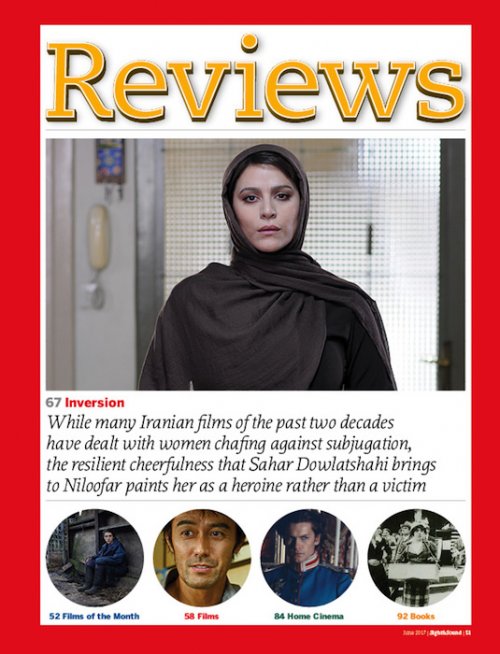 After the Storm
I Am Not Madame Bovary
The Levelling 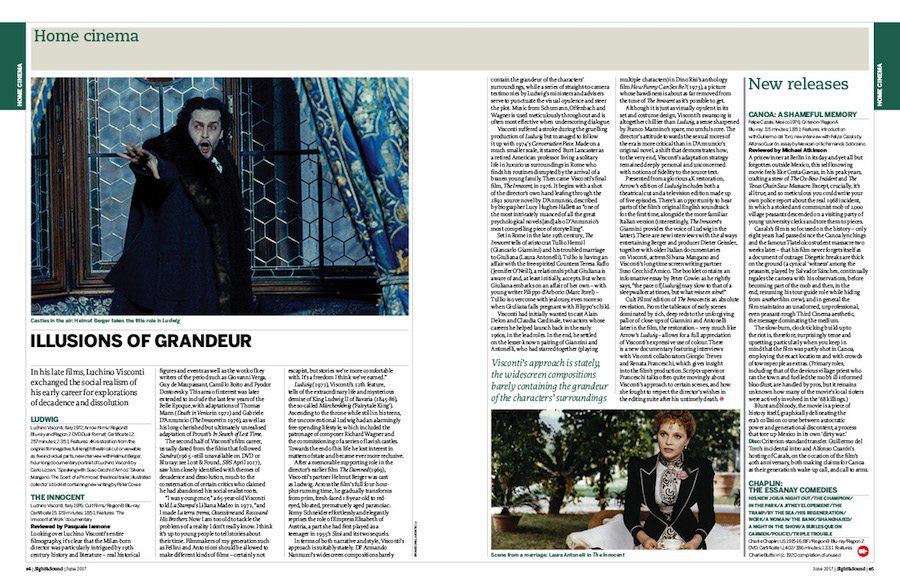 Illusions of grandeur: Ludwig and The Innocent

In his late films, Luchino Visconti exchanged the social realism of his early career for explorations of decadence and dissolution. By Pasquale Iannone.

Canoa: A Shameful Memory
Chaplin: The Essanay Comedies
Experiment in Terror
The Front
The Goddess
The Informer
Letter to Brezhnev
Property Is No Longer a Theft
The Proud Valley
12 Angry Men 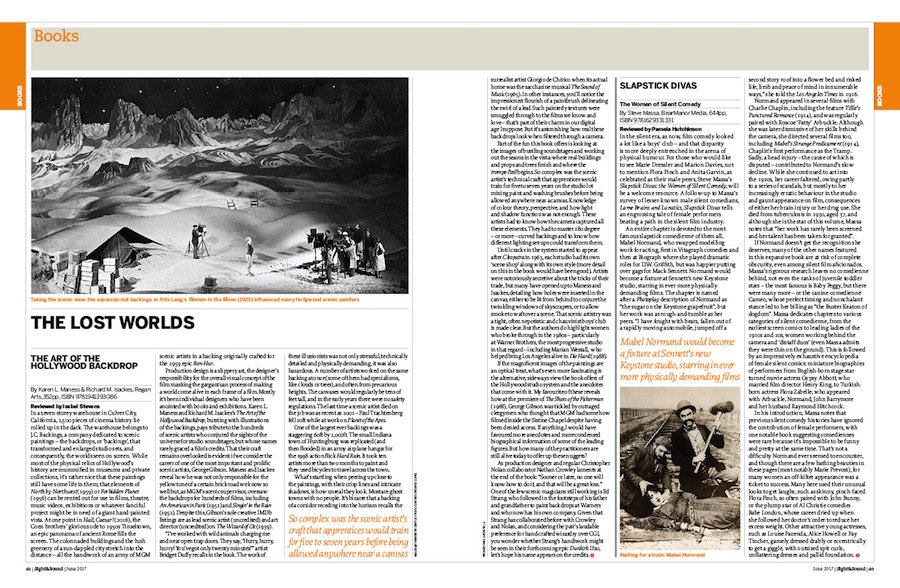 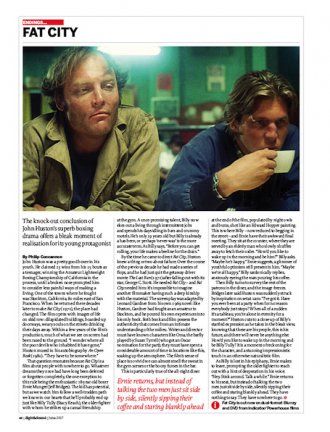 The knock-out conclusion of John Huston’s superb boxing drama offers a bleak moment of realisation for its young protagonist. By Philip Concannon.