Ryan Coogler’s spectacular film diverges from one tradition while honouring another, in the process becoming a unusually poignant, political entry in the Marvel franchise.

☞ Black Panther to the rescue? 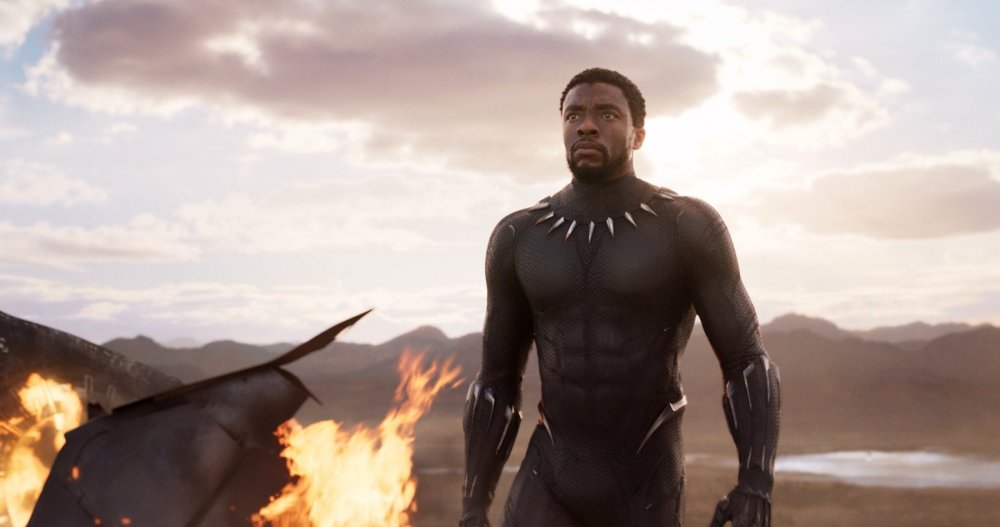 The latest big-screen superhero spectacle, Black Panther, from director Ryan Coogler and co-screenwriter Joe Robert Cole, begins with a history lesson. A colourful animated sequence unravels the origins of the fictional African nation of Wakanda, as told by a father to his son. Wakanda, the home of our hero T’Challa (played with muted gravitas by Chadwick Boseman), has disguised itself to the outside world as a poor farming nation, in keeping with the stereotypes that often reduce the continent to a single country.

In fact, the entirely self-sufficient Wakanda has never been conquered by outside forces and is the most technologically advanced nation in the world thanks to vibranium, a rare sound-absorbent metal, desperately coveted by those aware of its more violent effects. All at once lush and bucolic, urban and futuristic, with gargantuan rhinos and flying spacecraft and, perhaps most importantly, populated by a people of rich tradition, Wakanda soon becomes emblematic of the film’s loftier themes: it’s a tale of home, and so a tale of history, and so a tale that begs for cultural specificity even in its fantastical framework. Thus Black Panther diverges from the tradition of the superhero films that have come before it, films that by their very nature strive to appease, not to offend.

To be sure, Black Panther is very much a product of its genre. It’s a dynamic, electrifying ride of a film, with balanced measures of comedy, action and heart. But so much of that heart, so much of what will likely resonate with audiences, cannot be extricated from the immovable politics and inherent implications of a black superhero (though he has been preceded by the Blade trilogy and 2004’s Catwoman, among others). The birth of Black Panther in 1966 (created by Stan Lee and Jack Kirby) predated the official formation of the American Black Panther Party, but coincided with an era of independence for many African countries. It is nearly impossible to divorce Wakanda from its very real neighbours, ripped apart by colonisation and plundered of their natural resources. And to their credit, Coogler and Cole embrace these politics wholeheartedly. 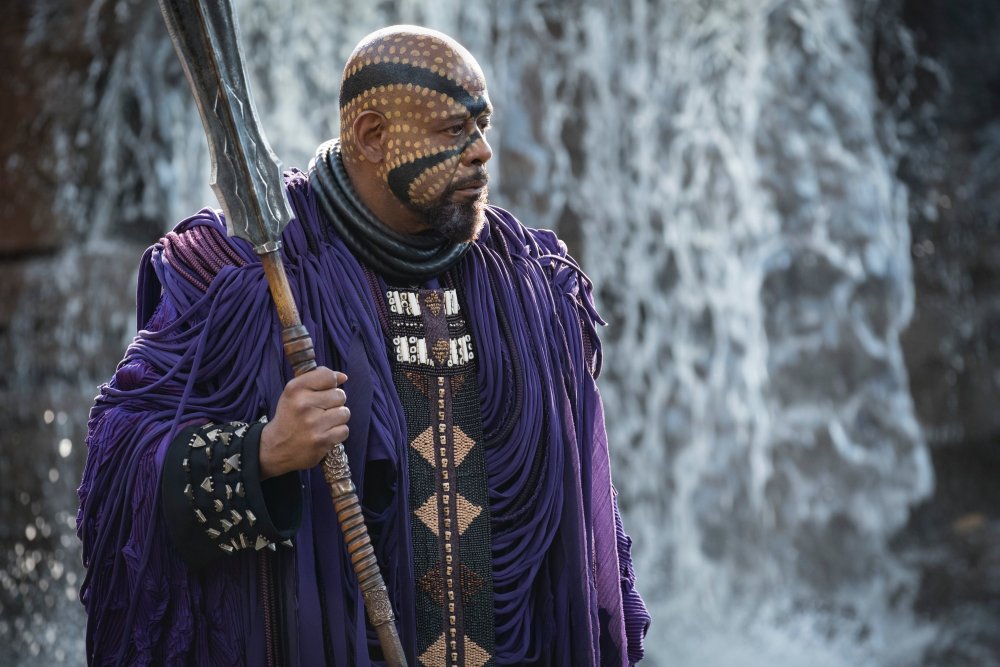 Black Panther follows the events of Captain America: Civil War (2016) after the sudden death of King T’Chaka (John Kani). Still mourning his father, T’Challa returns home to his mother Ramonda (a regal Angela Bassett) and his witty, engineer-savant sister Shuri (Letitia Wright), whose innovative weapon and gadget designs protect her brother and her country. With their support, he ascends to the throne as Wakanda’s king and warrior-protector Black Panther, and immediately finds himself at the centre of an age-old battle between tradition and modernity, and more pressingly, between justice and revenge.

When black-market arms dealer Ulysses Klaue (Andy Serkis) crosses his radar, T’Challa enlists the help of old flame Nakia (Lupita Nyong’o), a Wakandan spy, and Okoye (Danai Gurira), the head of the Dora Milaje, Wakanda’s elite all-female royal guard. Klaue absconded with a portion of vibranium years ago and murdered the parents of T’Challa’s best friend W’Kabi (Daniel Kaluuya), but their plans to bring him to justice are thwarted by American black-ops soldier Erik ‘Killmonger’ Stevens (Michael B. Jordan), who harbours a secret connection to Wakanda. Erik, like T’Challa, has lost a beloved father, but unlike T’Challa, he grew up poor on the streets of Oakland (a nod to the film’s Oakland-born director). A ruthless fighter, Erik sets his sights on the throne, determined to avenge his father and save, in his mind, the oppressed peoples the Wakandans could easily aid but choose to ignore.

Earlier in the film, as part of the coronation ritual, T’Challa visits his dead father in the ‘ancestral plane’ and the dead king tells his son, “It is hard for a good man to be a king.” This pronouncement does not – at least in the current instalment – foreshadow T’Challa’s internal character arc. He is noble, almost to a fault, and in fact one of the film’s few flaws is that he almost never betrays any semblance of moral complexity. These words instead become an indictment of the seemingly gracious former king. 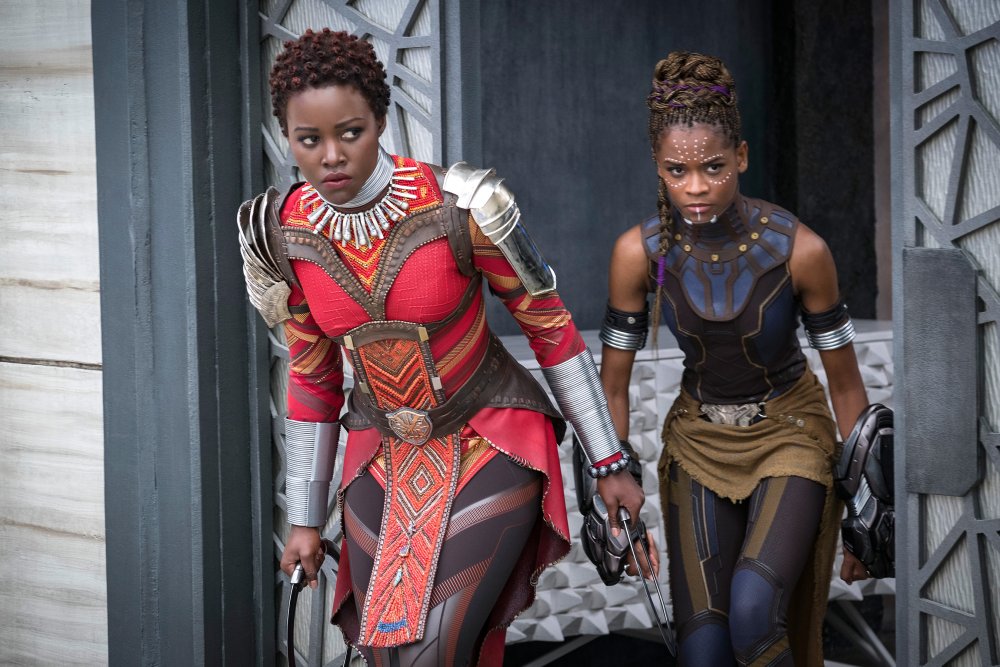 Lupita Nyong’o as Nakia and Letitia Wright as Shuri

Each of Coogler’s three films has been concerned with the legacy of fathers. His assured debut Fruitvale Station (2013) unfolds the final day in the life of Oscar Grant III – killed by a California transit police officer in 2009 – and much of the film’s emotional weight resides in the wide, unknowing eyes of the daughter Grant will leave behind. Creed (2015) and now Black Panther both follow protagonists burdened by history and haunted by a looming inheritance, men who set out to forge their paths in the name of fallen fathers, soon revealed to be not quite heroes but deeply complicated figures whose sins endure beyond the grave to trouble their sons. How these sons ultimately reckon with the humanity of the men they have made into legends and how powerfully they allow the past to guide their steps will prove the measure of their character.

The Marvel Cinematic Universe is no stranger to the tragedy of patrilineal trauma, with Thor, Tony Stark and lately Peter Quill all grappling with varying degrees of filial strife. But what in part distinguishes Black Panther, the film and the man, from other Avengers is this reverence for ancestors, and the ripples – the curses and blessings – that the past sends across generations into the present. It lends the movie a refreshing poignancy and vitality rarely found in the age of superhero films.

Comparisons to The Lion King (1994) are well earned, but the film also feels a natural heir to classic Afrofuturist cinema such as Space Is the Place (1974) and The Brother from Another Planet (1984). Moreover, Coogler brings a deft, nuanced grace to questions of generational hauntings and Wakanda’s responsibility to the outside world. For, ultimately, Erik embodies all the rage and pain of the African diaspora, of a people displaced and cheated out of an inheritance. 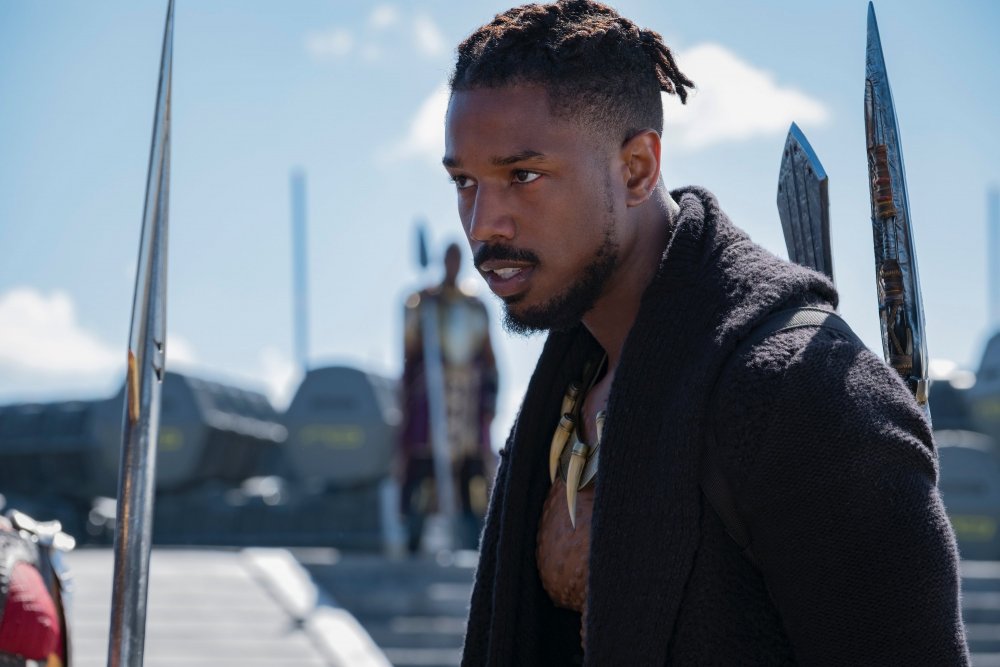 Jordan, in this his third collaboration with Coogler, commands the screen with a simmering gaze and a bitter, acerbic delivery, in a magnetic performance sure to earn Killmonger the rabid fanaticism that has attached to Loki and Heath Ledger’s Joker before him. Boseman, for his part, despite having the more thankless role of the two, carries the film with a quiet dignity one might rightfully expect of a man raised to be king.

That said, the real stars of Black Panther are its women, both before and behind the camera. Most superhero films – and Marvel has generally been no exception – struggle to give their women characters enough, if anything, to do. The Dora Milaje – ‘the Adored Ones’ – can boast one of the most impressive combat sequences in recent memory; Gurira as their staunch traditionalist general is a revelation throughout, and her fight scenes easily outshine any between T’Challa and Erik. Nyong’o makes for a compelling love interest, one who has her own ambitions, and Bassett is an elegant, endearing Queen Mother. But it is Wright, the charming, lively Q to her brother’s Bond, who emerges as the bright star of the film.

Rachel Morrison, who recently became the first woman nominated for an Academy Award in the cinematography category for her work on last year’s Mudbound, produces some remarkably stunning visuals here, while Ruth E. Carter’s costumes cement the film’s Afrofuturist aesthetic with elaborate designs inspired by real-life African tribes such as the Xhosa, Dogon and Suri, among others.

A meticulously crafted film, Black Panther establishes itself as a kinetic, powerful entry in the superhero genre.