The battle of Chicago: The Spook Who Sat by the Door

Adapted by Sam Greenlee from his autobiographical fantasia about a token black CIA operative turned liberation leader, The Spook Who Sat by the Door might long have been recognised as one of the great African-American calls to arms – had it not been suppressed by the FBI, says David Somerset. 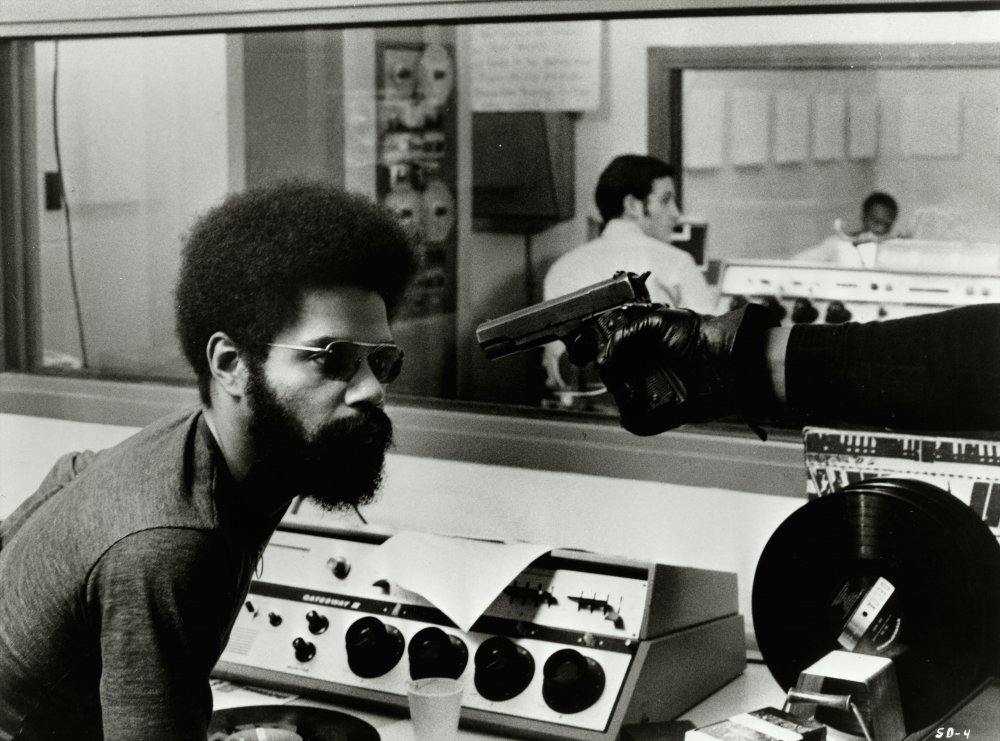 The Spook Who Sat by the Door (1973), the directorial debut of director Ivan Dixon, a rising star in the black American film world, has to date only been available from bootleggers or as an occasional short-run independent DVD release. It remains outside the canon of film history and is rarely screened in the US or elsewhere. This wasn’t always the case. On its release the film was the talk of Variety – here was a blaxploitation movie with a difference. That was until the FBI deemed it cause for concern and all but one of the existing prints were seized and destroyed.

The novel on which the film was based was written by Sam Greenlee. It found publication in the UK in 1969 via Allison and Busby only after having been rejected by 40 US publishers. Translated into six languages and receiving the Sunday Times Book of the Year award in 1969, the book’s hip, streetwise observation and wider political savvy made it a sensation. Early reviewers considered Greenlee’s novel a fictional accompaniment to Franz Fanon’s 1961 book The Wretched of the Earth, a primer for struggles of the oppressed and a first-world companion to Gillo Pontecorvo’s film masterpiece The Battle of Algiers (1966).

After graduation, Sam Greenlee served in the army before working for the US Information Agency on government propaganda promoting American culture overseas. He was one of the first black foreign-service officers, holding assignments in Iraq, Pakistan, Indonesia and Greece between 1957 and 1965.

Disillusioned with his role, Greenlee returned regularly to the US and couldn’t fail to notice the outbreaks of inner-city rioting, especially in his home town of Chicago. Deemed rebellions by Greenlee, the 1968 Chicago riots that followed the assassination of Martin Luther King demonstrated insurrection on an unprecedented scale, bringing in to quell them the full force of the army, as well as the police and the National Guard. Police were ordered by Mayor Richard Daley to shoot looters and rioters on sight. US filmmaker and actor Tim Reid, whose company later helped to release Spook, told the Los Angeles Times in 2004: “When you look back at the times… Martin Luther King was assassinated, Malcolm X, Bobby Kennedy. Black people were really angry and frustrated; we were tired of seeing our leaders killed. What do we do? Do we have a revolution?”

Greenlee left the US Information Agency but remained on the island of Mykonos and wrote The Spook Who Sat by the Door, often dubbed the first black-nationalist novel, in four weeks in 1968. Its original title, The Nigger Who Sat by the Door, was pre-empted by Dick Gregory’s newly published Nigger: An Autobiography. ‘Spook’ was substituted, the word deriving from a slang term for ‘spy’. It also plays on the notion that people of African descent were inherently superstitious and scared of ghosts. But most of all the ‘spook’ is the spectre of black revolution that has consistently haunted US white supremacists since the days of slavery.

The story itself narrates the quest of African-American CIA operative Dan Freeman, recruited as part of an affirmative-action programme. After a very competitive selection process he trains in high-level combat and espionage. However, following this arduous training, this model recruit is rewarded with a post in the reprographics (aka photocopying) department, ‘left by the door’ as a token of the CIA’s ‘racial equality’. Freeman leaves after five years and returns to Chicago, ostensibly to work for the city’s social services. But now he is primed and committed to revolution in the major US cities. The story is both a fanciful conceit and a razor-edged ‘what if?’ provocation in response to the urgency of the times.

For the movie screenplay, Greenlee teamed up with director and actor Ivan Dixon, acclaimed for his role in the pivotal film Nothing But a Man in 1964. Dixon was profoundly inspired by the novel but all his attempts to secure production funding from the major studios were unsuccessful. The search took Dixon and Greenlee across the globe and finally into Africa. Having spoken with interested Nigerian bankers, they were later disappointed to find these men had been ‘advised’ against doing business with black filmmakers from the US.

Returning home and desperate, they turned to individual donors within the local community. Greenlee lived on the South Side in Chicago, the main setting for the film. Not surprisingly, the city’s mayor Richard Daley refused to give them permission to shoot there. But help was at hand. Dubbed ‘chocolate city’, Gary, Indiana was home to a new administration under its first black mayor, Richard Hatcher. Hatcher opened the city doors to the Spook production team and gave them access to Gary’s police and fire departments, and even a helicopter for shots of the post-riot devastation. Though the film was set mostly in Chicago, little was shot on location apart from clandestine handheld and pick-up shots.

Halfway through shooting the film, Dixon and Greenlee ran out of money. Shown footage from the ‘riot’ scene cut together with shots of a sexy nightclub dancer and band, United Artists were easily persuaded to support what looked like a blaxploitation movie.

In addition the film was now to have an original score by electric-jazz musician Herbie Hancock. Greenlee believed that Hancock took on the project for its sheer scale, as well as for personal reasons (they grew up in the same neighbourhood and Hancock went to the same high school as his sister). Like Shaft (1971) and Superfly (1972), Hancock’s soundtrack was the perfect groove for this labour of love, its funky, highly charged ‘Fender Rhodes’ sound of the 70s building on Hancock’s deeper musical roots in US African-American music.

Prior to the 70s, Sidney Poitier was the big African-American film star. He won the Academy Award in 1964, the same year that Martin Luther King won the Nobel Peace Prize – and the same year that the Civil Rights Act was signed. However, by the late 1960s Poitier was out of favour with young people. They wanted an image to reflect their own predicament, someone less idealised and less passive.

In 1971 filmmaker Melvin Van Peebles independently funded his own movie, Sweet Sweetback’s Badass Song, after rejection by the main studios. Its tale of revenge and injustice is delivered at a stunning pace and with a combination of jump-cuts and montage akin to the European New Wave. Its success led Variety to consider movies capturing the black American experience as being highly marketable for a significant percentage of the filmgoing population. Thus the blaxploitation genre was born. Sadly, the majority of these movies were precisely that, serving up an onscreen array of stereotypical gangsters, cops, drug dealers, prostitutes and pimps.

The Spook Who Sat by the Door had its premiere in 1973 and was an overnight smash. Initial takings impressed the movie trade press. But its troubles quickly resumed. Theatre managers were approached by FBI members who advised against holding further screenings. All the prints were seized, though director Ivan Dixon had the foresight to archive the negative under a different title, and it’s for this reason alone that the film survives today. Historians consider such disruption and intimidation to be characteristic of the FBI’s COINTELPRO strategy – a covert and illegal project to discredit any homegrown community-based political movement in the US.

The film was effectively erased from history and the careers of all its protagonists foundered. Ivan Dixon was never to direct another film and the film’s star, Lawrence Cook, never found a role of comparable weight. Greenlee, financially bereft, continued to write and encourage other aspiring artists, and does so to this day.

Critically speaking, the film was hailed by the public for its sassy dialogue, stylish cinematography and cool soundtrack, while some critics found Spook resonant with the times. Yet its provocative message was missed by a mainstream media ignorant of the war that was being fought in the projects and ghettoes of the US. Unlike the later Rambo movies, which really did encourage violence in support of Uncle Sam’s military mission, Spook is an agitprop call to action across the social divide. It resembles Battle of Algiers in its textbook authenticity of social revolution, and is a regular presence on required-viewing lists for both intelligence and revolutionary groups.

On one level it’s a heist movie and, after a considerable set up, an unstoppable rollercoaster ride. However, Spook is much more than thrills: this is a film about ideas and types. During his work for the CIA Freeman demonstrates every possible clichéd role played by the black man during his 400 years in the US, from enslavement through the many masks of servility and complicity to those of rebellion.

Often painfully funny, the film leaves a strong aftertaste. When new recruits are instructed to steal from the enemy instead of their black brothers and sisters in the ghetto, Freeman alludes both to the invisibility of the ‘blacks with the mop’ and to their plight. A smiling cleaner enters an executive office and removes the company president’s collection of briar pipes from under his nose. Freeman tells his new recruits: “Your oppressors hardly know you exist! That’s the real issue.”

In a later scene, the gang conceals its actions by posing as hopeless junkies – no cops would believe such characters could pull off a heist. (Interestingly, the politics of drug trafficking at the time show the Superfly hustler as simply a pawn within a wider heinous trade that hides behind a respectable face, an argument beautifully captured in the lyrical counter-narrative of Curtis Mayfield’s haunting soundtrack to that film.) Turn reality on its head and use it to your advantage, Freeman tells his recruits: slapstick humour as corrosive satire as urgent call to action.

The film has its flaws. Spook is predominantly presented as a boy’s own adventure, with the exception of the Dahomey Queen who supports Freeman’s struggle despite her background. Anyone familiar with the history of the Black Panther Party would know that 60 per cent of its members were women, among them Angela Davis and Chaka Khan.

Despite this, the major achievement of Spook is its depiction of a spectrum of social roles within the African-American community. It’s a vivid picture of the language of race politics whose complexity and inherent contradictions go to the heart of the African-American experience, encouraging the viewer to transcend class and consider their collective plight. Without this critique of individual complicity in oppression, The Spook Who Sat by the Door could be accused of being a rabble-rousing exercise in fuelling blind resentment, but as Freeman tells a fellow gang member, “This is not about hating white folks… this is about loving freedom enough to fight and die for it.”

Related to The battle of Chicago: The Spook Who Sat by the Door