Alien abductions: 12 Years a Slave and the past as science fiction

Steve McQueen’s correctional slavery drama is only the most astringently literal of a handful of post-1960s films that show us the dystopian strangeness of true history. 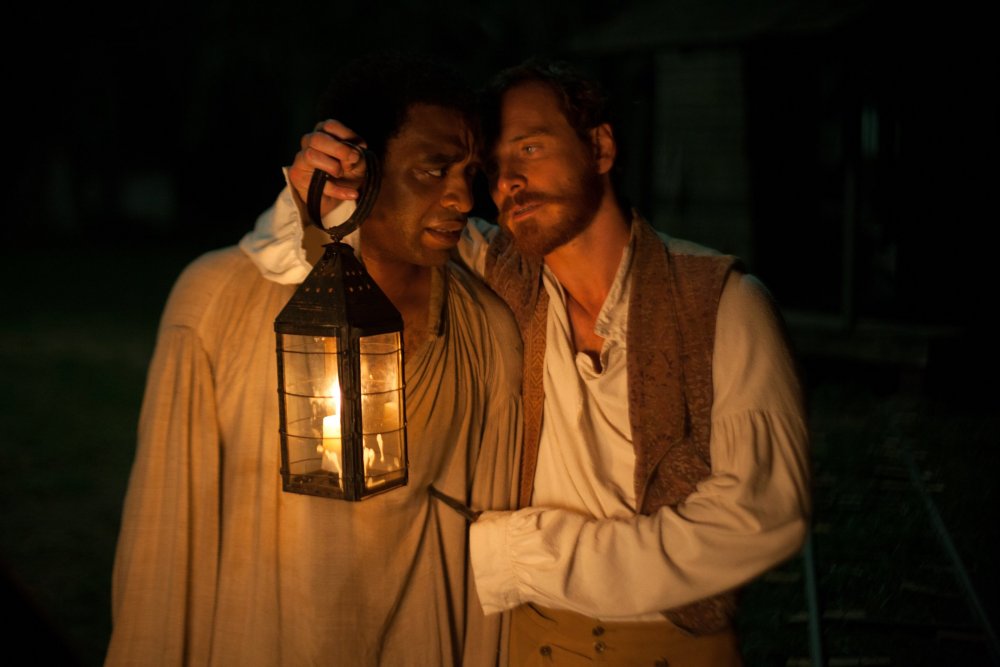 The body snatched: Chiwetel Ejiofor with Michael Fassbender in 12 Years a Slave

“I always thought about this film as being a science-fiction movie. He’s going to a land where there’s a book called the Bible, which everyone interprets in a different way, and there are people who are slaves and people who aren’t.”
— Steve McQueen, October 2013

“All the stories about alien abduction and spaceships? They already happened. Entire mass populations moved; forcibly dematerialised. How much more alien do you think it gets than slavery?”
— Kodwo Eshun in The Last Angel of History

If we are to assess Steve McQueen’s 12 Years a Slave as a work of science fiction in conventional terms it might appear to fall short. It is not a speculative tale of an imagined, technologically-augmented future like, say, Ridley Scott’s Blade Runner (1982) – which offered an allegorical critique of human bondage in a neon-streaked cityscape. Rather, it is set in a past that neither explicitly nor fantastically contradicts historical record, and is the account of a real man (Solomon Northup, played by Chiwetel Ejiofor) whose tale is grounded in documented events (his 1853 memoir).

Yet the first parallel between 12 Years a Slave and science fiction, as suggested by McQueen, is obvious. Its story – a free black man from Saratoga, New York who is kidnapped, transported to Washington DC and sold into slavery in the American South – is like something out of The Twilight Zone: a bona fide narrative of erasure, only marginally more explicable to the audience than it is to the victim. Northup is renamed ‘Platt’, severely beaten and bluntly informed that he is no longer a free man but “a runaway nigger from Georgia”. That an alternative backstory is casually invented for him by his tormentors only deepens his (and the viewer’s) sense of existential malaise.

McQueen and cinematographer Sean Bobbitt deliberately amplify the science-fiction feel of 12 Years a Slave in their stylistic choices, particularly during its first hour. There is something redolent of Steven Spielberg’s Close Encounters of the Third Kind (1977) in the disorienting, chronologically-disordered opening shot, which depicts no fewer than 18 slaves, including Northup, lined hip-to-hip in a tight frame, dwarfed by sugar cane plants, staring at something unidentified just to the right of camera (we soon discover it to be their boss). 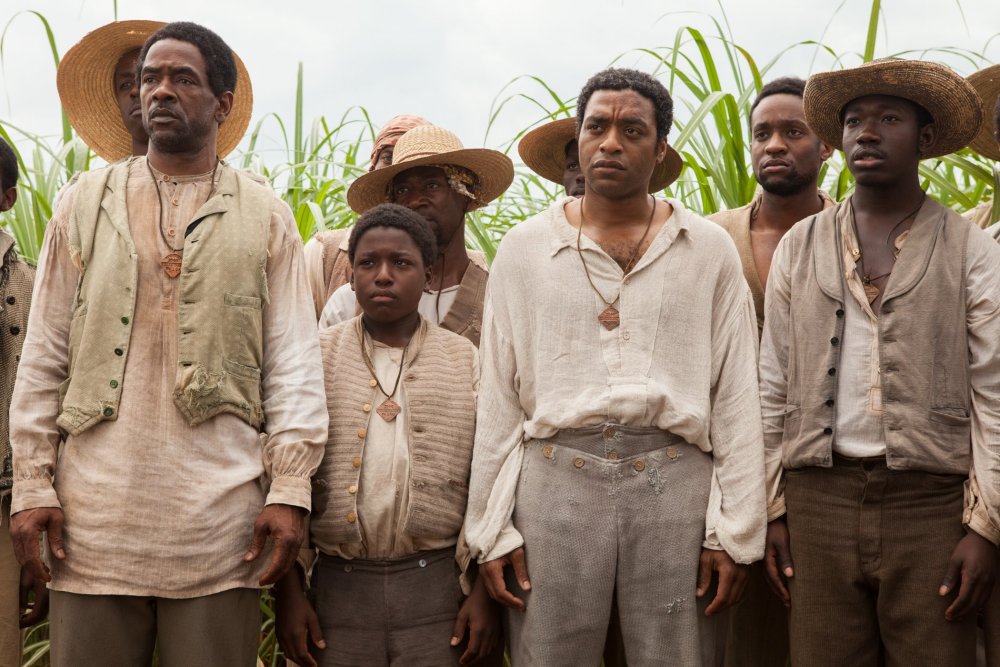 Shortly thereafter, the first significant image of Northup in captivity is not at eye level, but from a high angle, looking down, accentuating his helplessness. The shot is overtly stylised, framing the cell-bound Northup in a circular pool of harsh white light; it’s crafted to look like he’s been beamed in from outer space.

Throughout, the familiar is abstracted to underline the distortion of the situation: a churning waterwheel inside a boat captured in extreme close up, the slave boat itself made to resemble a tin of sardines when its tarpaulin is peeled. In McQueen’s calculated framing and characteristic fondness for lengthy shots I noted similarities to the eerie dystopian chill of Stanley Kubrick’s A Clockwork Orange (1971). Meanwhile, Hans Zimmer’s impressionistic score – grinding, brusque and reverb-heavy, particularly in the early sequences centred around Northup’s hellish immersion – is as grandly dramatic as anything in, say, Independence Day (1996).

In order to amplify its subject’s sense of alienation, 12 Years a Slave also taps into the pronounced psychogeographical and sociopolitical disjuncture that has historically existed between the North and South of America, from slavery through the Civil War, the discriminatory Jim Crow laws, the Civil Rights Movement and the dialectical opposition of Martin Luther King and Malcolm X. In contrast to the visually compact, sepia-toned, happily multiracial version of Saratoga which appears in sparingly-used flashbacks, McQueen and Bobbitt employ vast, Spielbergian shots of verdant Louisiana to embellish Northup’s helplessness.

In this context, the words of radical artist Kara Walker – whose subject is the visual representation of slavery – seem appropriate; in a recent interview with Art21 magazine, she explicitly evoked the language of science fiction when speaking of moving to Alabama at a young age:

“I found myself subjected to a set of expectations, stereotypes and mythologies that I was not implicated in. [I was] in a way a little like a Martian.”

And of the institution of slavery itself:

“It’s this completely absurd, extreme, violent situation that required so much perverse ingenuity.”

In McQueen’s film, we see the perverse ingenuity on display, but – like Northup – we’re left asking, “Why?” 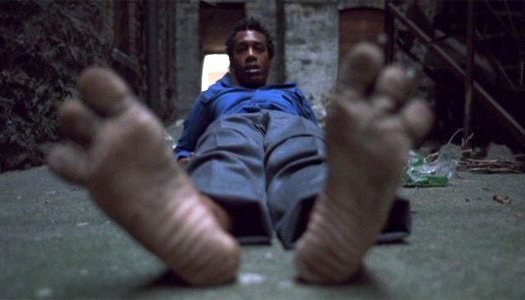 The Brother from Another Planet (1984)

12 Years a Slave is a powerful film, but in its relentless focus on the corporeal realities of slavery – largely for one man – it misses the allusive, psychologically complex nature of films to have explicitly combined science fiction with the subject.

The most subtly allegorical of these is John Sayles’ The Brother from Another Planet (1984), a playful spin on the runaway-slave narrative. It stars Joe Morton as a mute, unnamed extraterrestrial who lands in Harlem after an ambiguously rendered spaceship accident, and soon finds himself on the run from two mysterious white men who want to return him to captivity. He is taken in and protected by the inhabitants of New York, who come to resemble a latter-day manifestation of the Underground Railroad, the network of secret routes and safe houses used by 19th-century slaves in the United States to escape to free states.

The film suggests Harlem – representing the North – may not be perfect (it is riven with drugs, poverty and social inequality), but it’s preferable to spending another minute in space, here standing in for the vast expanse of the South. What’s more, it’s fertile ground for resistance against oppression.

The American South is present as a site of ideological reformation and revisionism in two tangentially similar science-fiction films from the 90s: Roy Campanella II’s Brother Future (1991) and Haile Gerima’s Sankofa (1993). 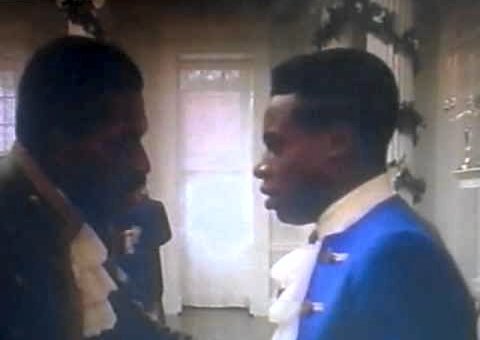 Made for TV, Brother Future is smart, family-friendly fare which employs a classic sci-fi trope: time travel. In it, a brash young black Detroit resident is hit by a car while attempting to flee the cops and finds himself miraculously transported to Charleston in 1822, where he conveys the boldness of his own generation to the benighted slaves, teaches his friend Josiah to read (and rap!), and becomes involved in a putative slave rebellion. Impressively reflexive, if a touch moralistic, it balances a gentle critique of 90s youth materialism with good-natured humour and a laudable invocation for young urban black kids in American to learn their history.

Conversely, Sankofa – despite a similar narrative hook – eschews conventional cinematic language for something more poetic, esoteric and pan-African in scope. The film tells the story of a model on a shoot in Ghana who is magically transported back to the antebellum South. But such is Gerima’s insistence that we find the character’s initial behaviour obnoxious (she writhes around sexually in front of a [white] photographer on sacred land – the Cape Coast Castle, which was historically used for the Atlantic slave trade), her psychogenic odyssey seems as though it has been administered as a punishment. 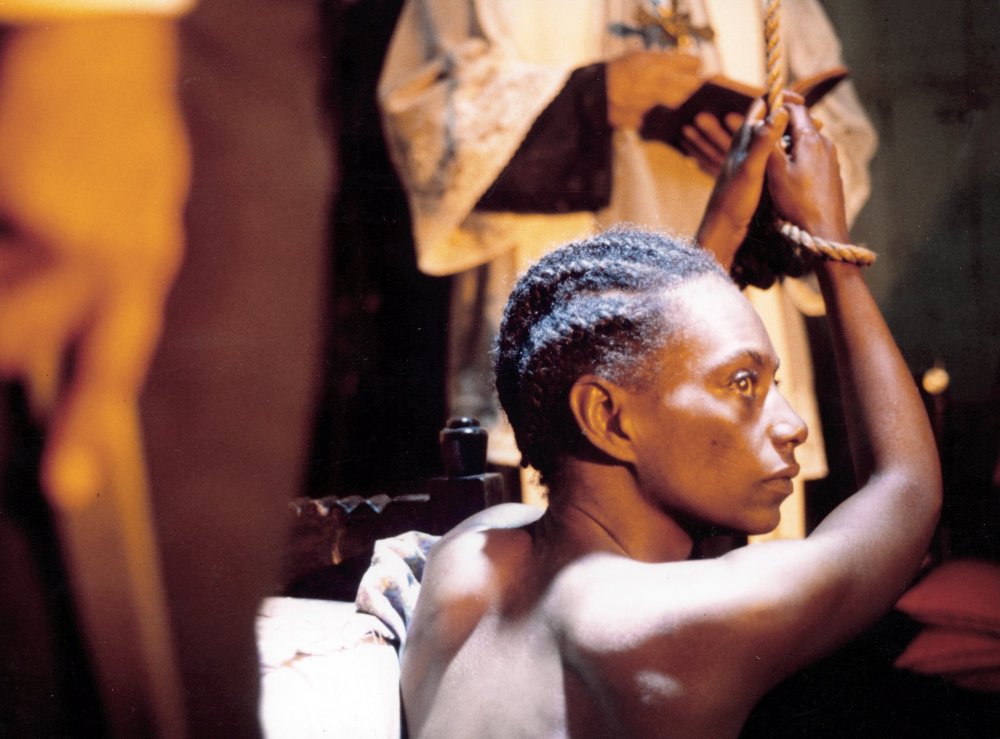 Sankofa is loaded with beautiful, evocative imagery, and is strong on capturing the hierarchical complexity of intra-slave relations, which the Ethiopian-born Gerima – a one-time associate of Charles Burnett on the 70s Los Angeles black independent scene – clearly intended to use as a contemporary allegory. He told academic Assata Wright:

“If you look at America as a plantation, then you can codify the different classes and interest groups within the society. You find overseers, head slaves, you find plantation owners in a very advanced, sophisticated way… I was not interested in the past because it was exotic or brutal. I was very interested in its relationship to the present.”

Both Brother Future and Sankofa employ what the author Lisa Woolfork terms “bodily epistemology” – essentially a representational strategy that uses the body of a present-day protagonist to engage with the traumatic history of slavery – and in both the characters live to tell their tale.

In 12 Years a Slave, the connections between past and present are more subtle. The only concession McQueen makes to time travel comes in an unexpectedly intimate moment during the end of his film, when a shattered Northup stares down the camera, breaking the fourth wall; it’s as though he’s suddenly in the room with us, imploring us to remember that the effects of America’s racist past still reverberate today.

Time travel is also utilised as the central conceit in Goodbye Uncle Tom (1971), an outrageous pseudo-documentary by Italian filmmakers Franco Prosperi and Gualtiero Jacopetti, in which a pair of contemporary journalists go back to the antebellum South to report on slavery, beginning with the nuts and bolts of slave transportation. It’s often incredibly difficult to watch (its verité-style, Salo-esque cavalcade of rape, nudity and abuse makes 12 Years a Slave look like Jackanory), but it is perceptive about the economic basis of slavery, unsparing in its lampooning of slave owners, and formally fascinating.

It is also extremely harsh on bourgeois blacks – Martin Luther King is fingered as the ultimate ‘Uncle Tom’ – and ends with a time-bending restaging of the Nat Turner slave rebellion of 1831 in an unspecified location in present-day America. The message is seemingly clear – late 60s / early 70s America remains a slave state for blacks, who are are trapped in psychological, economic and physical prisons, and armed resistance is the only way.

However, the film’s unceasing prurience, puerility and lack of a discernible moral standpoint reduces (or elevates, depending on your point of view) it to little more than a feature-length raspberry blown at America as a whole by European pranksters. In this respect it echoes Lars von Trier’s aggressively Brechtian Manderlay (2005), the last major film to tackle the subject of American slavery before Steven Spielberg’s Lincoln (2012) kicked off the recent mini-revue encompassing Django Unchained, Lee Daniels’ The Butler and 12 Years a Slave. 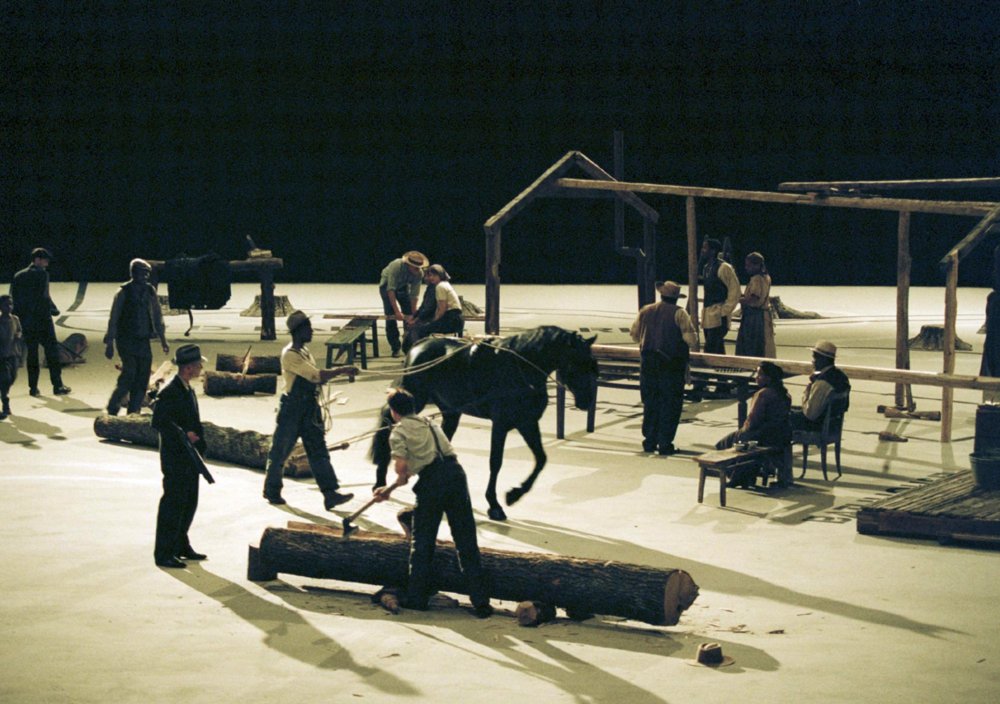 Ultimately, perhaps the key reason why McQueen’s film feels so strange, so sci-fi-esque, is that it registers as a bracingly unique experience in spite of its linearity and relatively conventional deployment of cinematic language. Author Mark Dery, who in 1993 coined the concept of Afrofuturism (a critical term encompassing the work of artists interested in projecting black futures), has suggested that:

“African-Americans… are the descendants of alien abductees: they inhabit a sci-fi nightmare in which unseen but no less impassable force fields of intolerance frustrate their movements; official histories undo what has been done.”

If we view Dery’s observation about official histories within a mainstream artistic context, 12 Years a Slave is deliberate, astringent act of canonical revisionism because it seeks to undo received truths in Hollywood representations of slavery: this began with the historical travesty of D.W. Griffith’s Birth of a Nation (1915), continued with the likes of Victor Fleming’s Gone with the Wind (1939) and segued into the plantation genre featuring happy docile slaves.

It achieves its stark, otherworldly quality by virtue of its unsentimental depiction of a real-life dystopia, and its rejection of fantastical elements (see the revenge-heavy blowouts of the blaxploitation genre, or the flip, pop fantasia of Django Unchained); when Northup escapes, we can only feel numb because the atrocities continue behind him. There is no uplifting postscript. McQueen grasps the palimpsest of a plantation movie, but diverts from the traced text, scrawling over it with corrective block capitals. He takes us to another planet: our own, where the truth is sometimes stranger than fiction.

Related to Alien abductions: 12 Years a Slave and the past as science fiction