The Nine Muses director continues his odyssey into the presence of the past in this mesmerising installation tapestry of hand-me-down films, photographs, paintings and more. 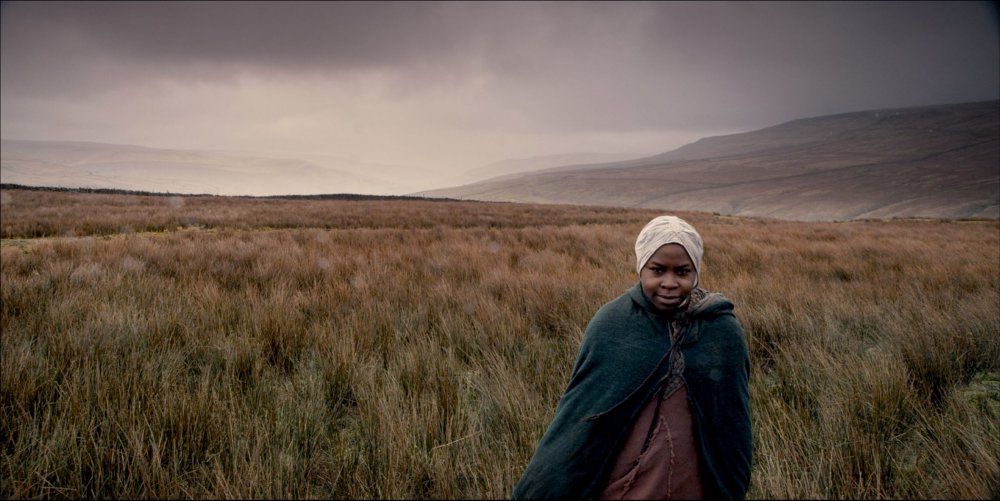 ‘Hauntology’, according to Jacques Derrida in his 1993 book Spectres of Marx, is the idea that the present is haunted by the ghost of the past, something neither present nor absent. John Akomfrah pluralises this term for his new exhibition’s title, and across its sundry parts (a new single-screen and a new triple-channel video, a sound installation, a series of photo diptychs and a re-edit of a film from his back catalogue), evokes with a feather-light touch the many pasts present within the present.

The overriding sensation as you walk through the gallery is one of a near-swoon, and this is apt: Akomfrah has been exploring the genre of costume drama, how it stages history and makes us nostalgic for a time we may never have known. The effect is not dissimilar to that of archival film scenes, and indeed the exhibition is introduced by a series of photographic diptychs entitled Allegories of Mourning (2012), derived the US Library of Congress archives. Juxtaposing faces and figures with industrial scenes, these still images are at once rooted in an industrialised past yet still seem fresh and vital today.

Of course Akomfrah, who co-founded the Black Audio Film Collective in the 1980s, is also continuing his quest to examine black identity in culture. Two portraits by 16th-century German painter Albrecht Durer – one of a black man, one a black woman – anchor the new single-screen film. Indeed, Peripeteia (2012) takes them as its starting point: the portraits are among the earliest Western representations of black people, but the individuals’ identities are now lost to history. Akomfrah came across the portraits 20 years ago and they clearly affected him deeply. In the film he has the two subjects brought to life by actors who separately traverse a wild and empty landscape, evidently searching for… something.

In between gorgeous images of drowned-looking countryside, calamitous banks of clouds and stony ruins, the film features shots of segments from Hieronymus Bosch’s The Garden of Earthly Delights, another 16th-century European painting in which black people are depicted – and there’s certainly the sense that the two protagonists have been cast out of somewhere they’re trying to regain. The lush, painterly cinematography is contrasted with black-and-white photographs of tribesmen and women, suggesting a history for the pair. Peripeteia’s is a haunted landscape, peopled by two haunted protagonists: the past weighs on them, seems to propel them around their wuthering setting like ghosts, until they find each other and stare at the camera, meeting the viewer’s eyes. 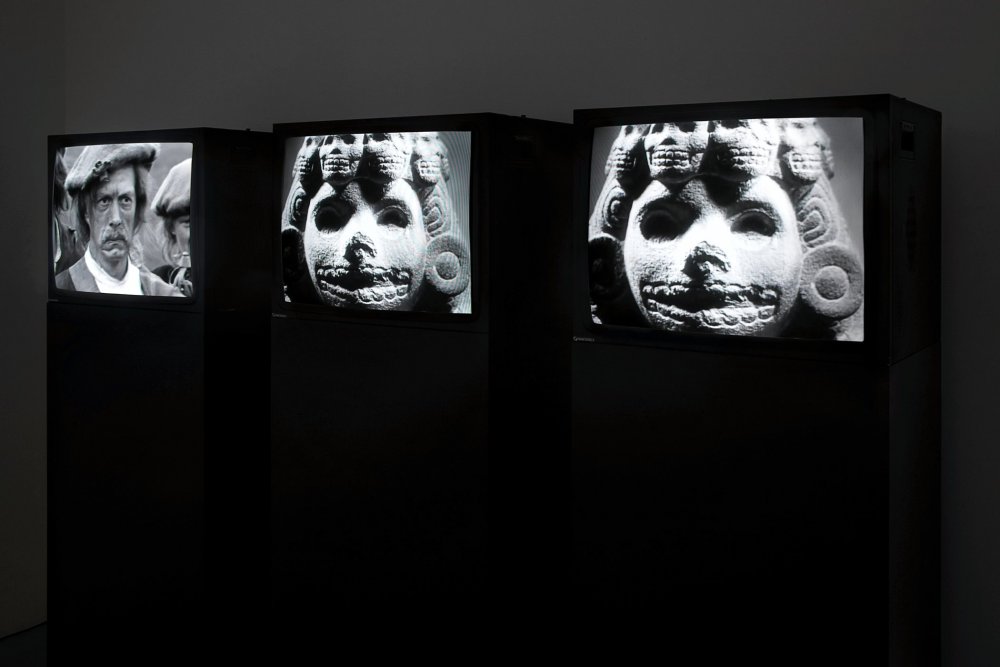 The primacy of the face in film, its ability to convey events in a given narrative, is further explored in the three-channel work Psyche (2012), which brings together fragments from a variety of seminal films that have influenced Akomfrah: Borderline, Battleship Potemkin, Que Viva Mexico!, The Passion of Joan of Arc, Winstanley and The Chronicle of Anna Magdalena Bach. Footage of Renée Jeanne Falconetti’s rapturously pained face, of a dead 17th-century soldier’s bruised and open-eyed visage, of the woman and child looking up at the soldiers on the steps in Battleship Potemkin underline the importance of the filmic face to convey history. “From the face will come the truth of the event,” reads one of the work’s titles, and finally: “With the face you will meet paradise.”

Akomfrah’s film influences are further enshrined downstairs, with an installation entitled At the Graveside of Tarkosvky (2012), marking a new departure for the artist. The floor is covered in pebbles, on which stands a concrete slab facing a screen. On it is a slide-projection of different landscapes, previously unassigned images Akomfrah has shot over the years: a lone man rowing a boat in the middle of a vast, metallic stretch of water; wriggling tadpoles; a listed ship. 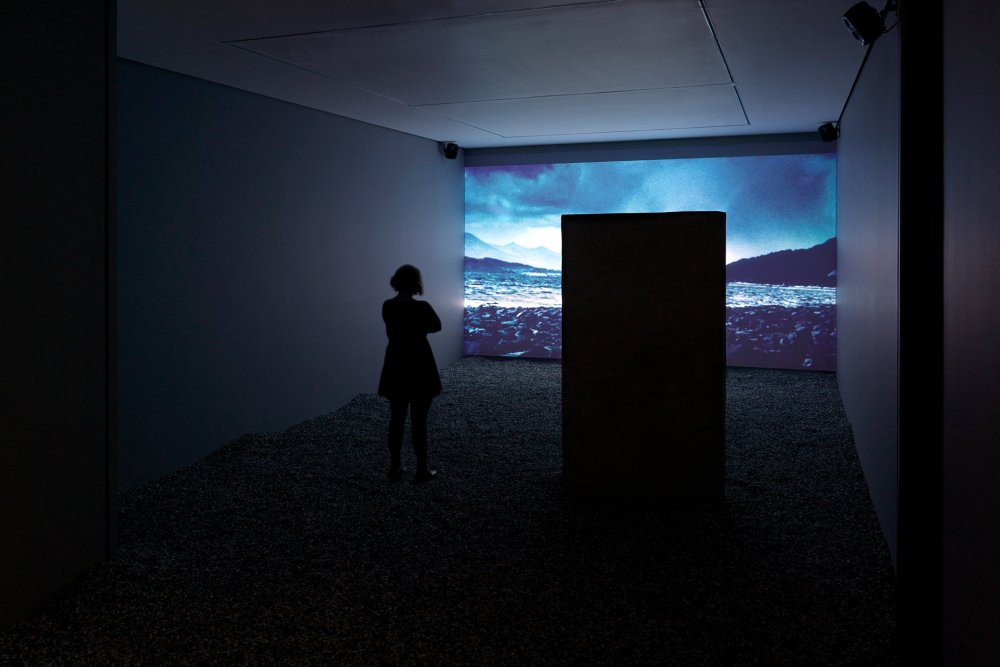 At the Graveside of Tarkovsky

A soundtrack produced by long-time collaborator Trevor Mathison integrates excerpts of soundtracks from Tarkovsky films into an eerie, swooning score that at points seems to include the sounds of a woman sobbing, and in one instance the word “Papa!” is heard. Is it from the one line uttered by Little Man in Tarkovsky’s The Sacrifice (1986)? It’s difficult quite to tell, as the elements in this work merge together, no one element taking precedence. Skilled not just at conveying beauty in film, with this work Akomfrah shows he is adept at creating whole environments: this is an atmosphere thick with longing, suggestive of a primordial, even post-apocalyptic space, with the stone slab a mute monolith from the past or possibly the future.

Akomfrah revisits his own filmic past with a new edit of The Call of Mist – Redux (2012), originally made in 1998 as part of a BBC commission about the first 100 days of Tony Blair’s government. Akomfrah’s mother died shortly before he began work on the film, which originally looked at genetic engineering and cloning, and the new cut now includes biographical information about his mother, meditating on the notion of inheritance – both genetic and emotional – and loss. 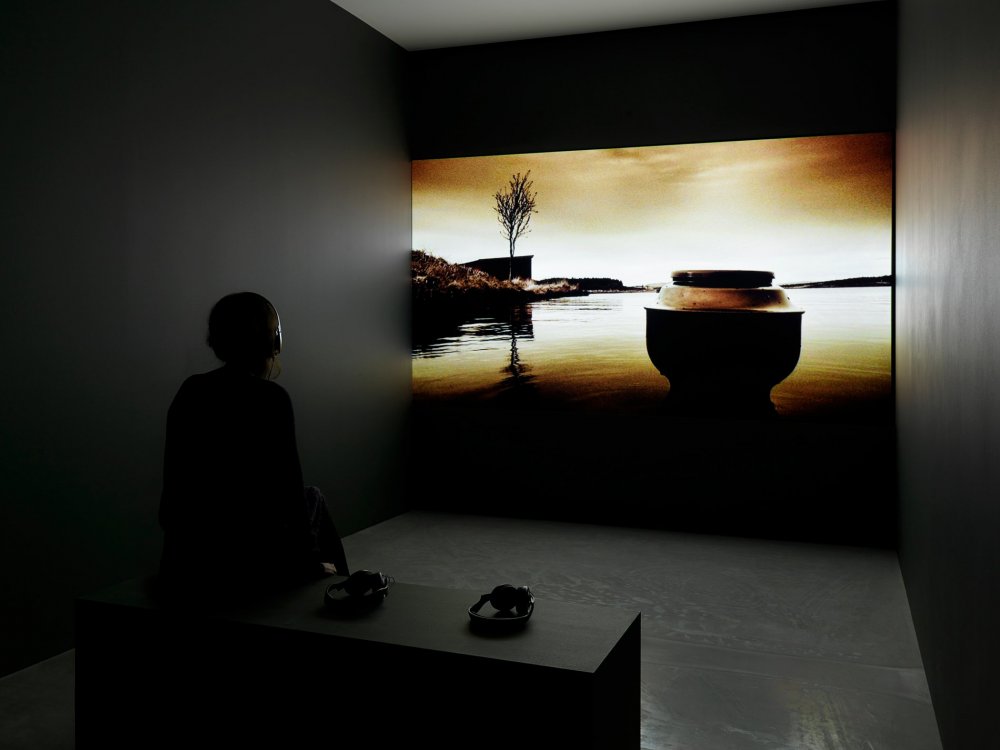 The Call of Mist – Redux

Besides nods to Dolly the sheep and grainy footage of Tony Blair played on a clunky old TV, there are other idiosyncratic markers of the era: an answering machine is a recurring motif, while the protagonist uses public phones to check on his messages. Rather than distract the viewer, they become signifiers of time passing, their meanings having changed and become more complex in the intervening years. A conduit for the ghostly sounds of a voice recorded in the past, the answering machine itself is now a relic from a lost time.

As the protagonist wanders around Scotland with his mother’s ashes, he remembers the moment as a young boy when he knew she would die and told her of his fear. “That’s why we have children. That’s why I had you,” he intones, remembering her response – and further emphasising the show’s overarching idea of the past not only haunting but being imbricated in the present.

Indeed, this exhibition actively makes you want to get lost in the past, to get lost in loss, and I could have spent hours re-watching the films. Like a daytime reverie, Hauntologies is gloriously drunk on the past. You exit blinking in the light, back to the present, but with Akomfrah’s images lingering in the mind.