Settling into the best movie works in this uneven gallery group show, Mark Sinker pines for the focus of the cinema screen. 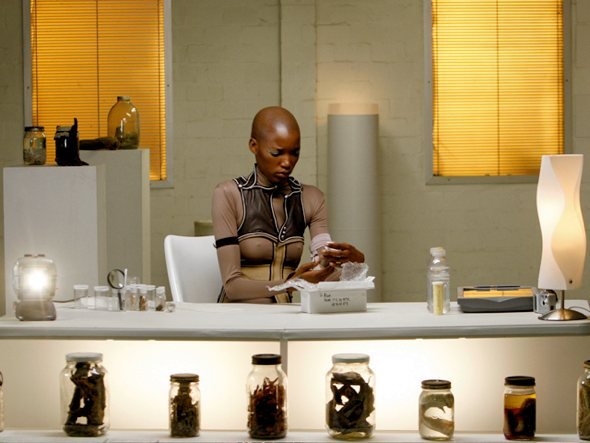 Grandly named as it is, the takeaway effect of this group show is disappointing. It corrals roughly a dozen figures from across Africa and Europe, said to represent a “recent tendency for artists and filmmakers to apply the forms and concerns of science fiction to narratives situated in the African continent.” More to the point, they share no convention of framing that allows them to focus their quite disparate effects and intentions, which range from extremely slight conceptual gags to subtle explorations of detail that demand more close attention than a film shown in a gallery surely gets. All the same, fully six of the ten groups of works here feature moving images. Some solved the problem simply by being five minutes or less, while others, though longer, were loops, so it doesn’t matter when you enter their room.

The Kenyan director Wanuri Kahiu’s mini-feature Pumzi (pictured above), a reworking of E.M. Forster’s 1909 fable The Machine Stops, is in effect a (very short – 21-minute-long) orthodox SF movie with title sequence, end credits and a fixed schedule of showings. It’s set in a city hermetically sealed from an outer world rendered hostile by extreme worldwide drought. Nothing grows in the desert outside; much daily activity within is given over to the unpleasant specifics of recycling water. The CGI gives it the airbrushed hypergleam of a mid-70s Hipgnosis LP sleeve – and engaging though it is, it isn’t much deeper than that makes it sound, a succession of quasi-poetic sight-gags foregrounding African women as the future’s scientists and political technologians, and lush trees dreamt in arid spaces. 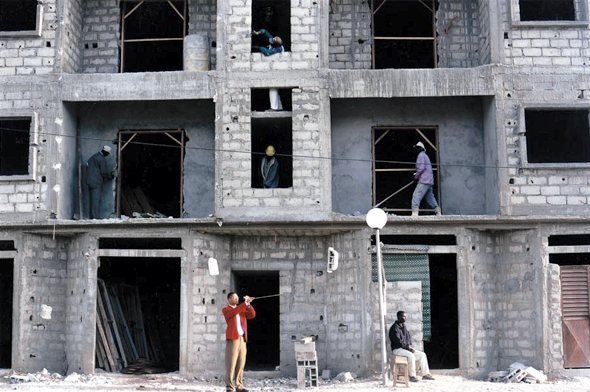 The UK director Mark Aerial Waller’s Superpower – Dakar Chapter is a 15-minute loop, and I loved it, though you may need to be an unapologetic fan of 1970s Doctor Who (which it strongly resembles, in production values and plot shape) to agree. The looped effect combines with very low-fi video special effects to suggest time-travel effects: three Senegalese soap actors play Time Lord-ish guardians concerned about some ill-defined alien incursion, lurking menace or global catastrophe, in deep past or far future. Everything is hand-wavily connected to the stars in Orion’s belt; the backdrop is the ramshackle building sites of modern urban Dakar.

The one piece that uses the contextual problems of film-in-gallery to full effect is the Israeli Omer Fast’s ‘Nostalgia’ trilogy. Its germ – which appears in all three interconnected films – is the (seemingly) true-life encounter in the shortest with a former child-soldier from Nigeria interviewed in what looks like a verdant Surrey woodland. His cultural background is obscure – he looks more European than not – and he’s specifically detailing an element of the bush-craft his kidnappers taught him: how to make a trap for partridge from twigs and branches.

In the second (ten-minute-long) film, this same interview is dramatised as an encounter between a (very ‘African’) former child-soldier and a very European filmmaker who hopes to make a ‘science fiction’ film. The subject here is agendas and misunderstanding, the interviewer wanting nice crunchy concrete detail to ground his fiction, the interviewee wanting to tell his story, to be helpful and to help himself. The moment the film is mentioned he eagerly asks if he can be in it, and the director is circumspect (he wants to say no but doesn’t want the soldier to stop telling his story).

What comes across – via script and acting – is that the director ‘knows’ more in a wider sense (about the reason for the interview and the wider political situation); but the soldier, limited as his information is, has a detailed and particular knowledge, and is shrewder (as well as much more likeable and straightforward). 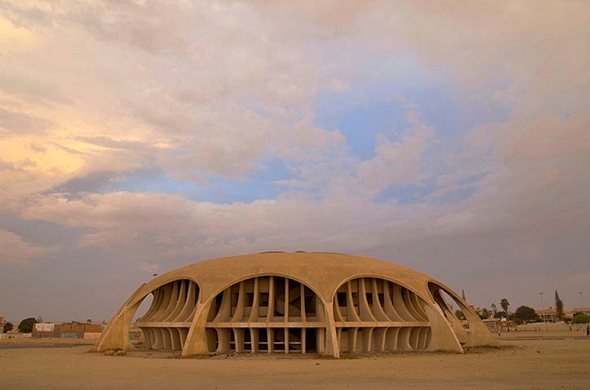 Finally we see the film as made: a (32-minute-long) science-fiction thriller set in a world where some unspecified political catastrophe has overtaken Europe, and the authorities in some African country are taking steps to cope with refugees and illegal immigration. Though neatly made – with amusing moments and conceptual reversals – this film is intentionally unremarkable. The piece as a whole works around the effect of our now very heightened awareness of the import of its constituent pseudo-concrete elements; it’s about how stories are built, how the factual elements in fiction can be distorted or ever betrayed to produce the desired effect, and what (ultimately) we feel about this.

As such it’s a fascinating and rich piece – effectively presented here and hard to imagine working in any other medium, let alone any other context of the presentation of film. You progress through the three films in ascending order of length, and have to retreat out of the galleries past them in reverse order. If you allow yourself to choose to watch everything – in all roughly 45 minute’s viewing – you’re putting yourself into a rewarding and provocative immersion, which perhaps heightens your perception of everything else in the show.

The strongest pieces here are those that unfold as a riddle rather than a grabby once-for-all conceptual reversal gag; that allow you to respond in detailed time to your own recognition of pre-existing ideas, assumptions and conventions – about Africa, technology and the present, modernity and the future, film and fiction. But how to encourage gallery-goers to give such an unfolding time and space to happen? Absent the necessary conventions and habits, this is a trick seemingly as far as ever from being learned.