In Adieu au langage, JLG fecks around with 3D – and forfeits his Cannes dinner invitation again. “This ends in barking”, he notes… 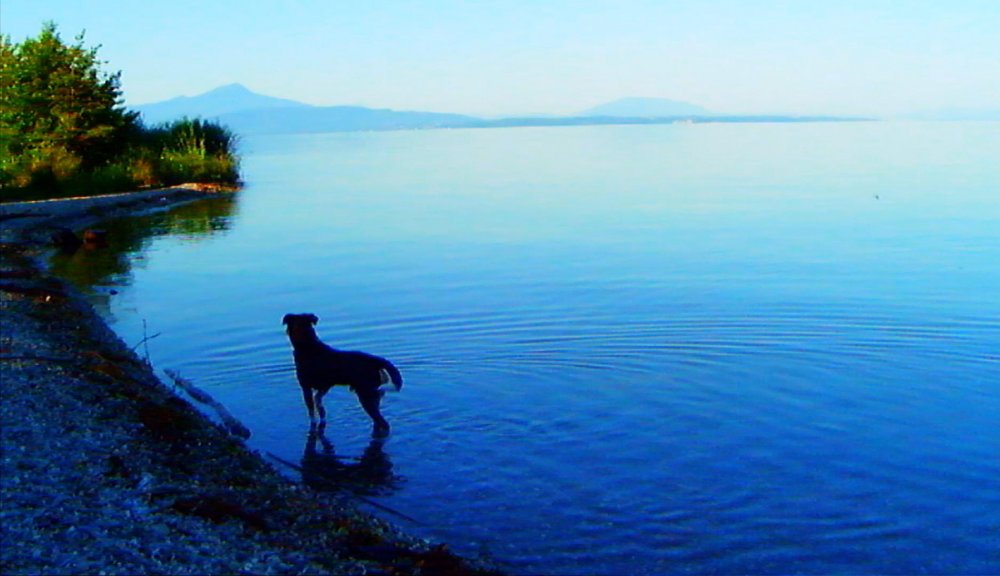 The pressbook for Adieu au langage, the 117th film by Jean-Luc Godard, signs off with the title of Marcel Duchamp’s seminal 1915-1922 work The Bride Stripped Bare by Her Bachelors, Even, aka The Great Glass, one of the most confrontational and game-changing works in 20th-century art. Godard’s film may not be quite so epoch-making, but the reference to the erstwhile R.Mutt is significant: it situates him firmly, almost 65 years since his first short, within the tradition of artistic provocateur even more firmly than it recalls his beginnings in the nouvelle vague.

A similar sense of rupture has marked Godard’s relations with the Cannes Film Festival, which helped promote his early work, which he helped shut down (along with François Truffaut and others in May 68 – a rupture which brought into being the Directors Fortnight as an alternative to the too-bourgeois main festival), and at which he has sporadically premiered films from the 1980s until the present.

His last Croisette presence was – or should have been – four years ago, when Film socialisme was in the Official Selection. But Godard failed to show – a prerequisite of being in Competition – citing “Greek reasons” (i.e. no money), thus incurring the harshest penalty in the protocol of Cannes: they cancelled the official dinner.

This year he again promised to show up but didn’t. He has a press agent but there are no interviews to be had, even with cast members. And of the 200-odd films in the Festival as a whole, Godard’s is the only one not to list a running time. Clearly JLG has effortlessly completed the transition from enfant terrible to Bad Grandpa.

His relationship with language – the subject of the new film – is equally fraught. First, though, let’s be clear about one thing: this is language in the sense of conventions of communication (the French langage), not national tongues (langues).

But here too, Godard belongs in a tradition more than he might be willing to accept: that of Sartre and other philosophers whose philosophical and political langage involves the manipulation and re-definition of the meaning of words, often in aphorisms. “Fecking around with words,” as an Irish Sartrian friend of mine used to describe it. Godard’s films abound with aphorisms – my favourite is the almost untranslatable “Ce n’est pas une image juste, c’est juste une image” from Le Vent d’est (1969) – as much as they deconstruct language. Adieu au langage is (not surprisingly) no exception. 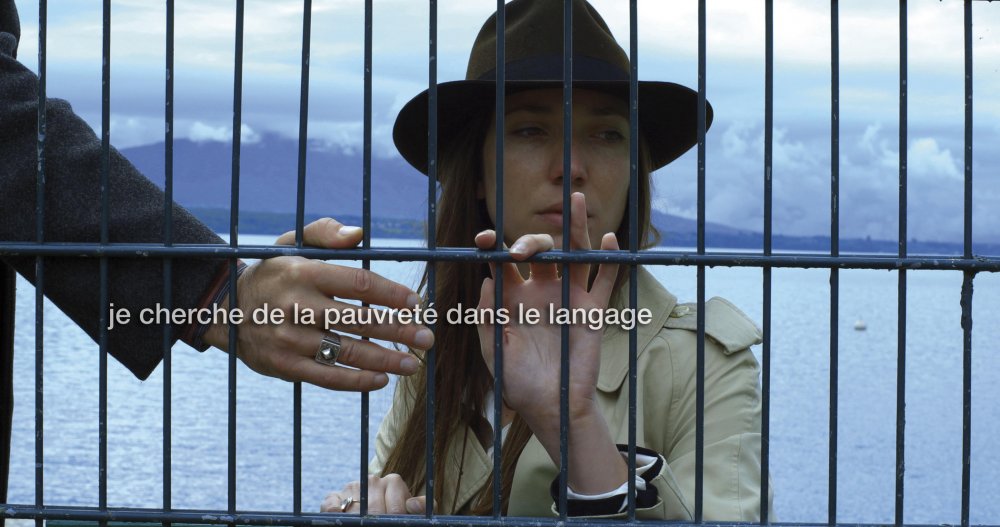 The film’s Cannes press book – which contains none of the usual biographical or production information (not even a cast list) – does contain the following ‘synopsis’, which I am happy to steal rather than attempt any summary of my own: 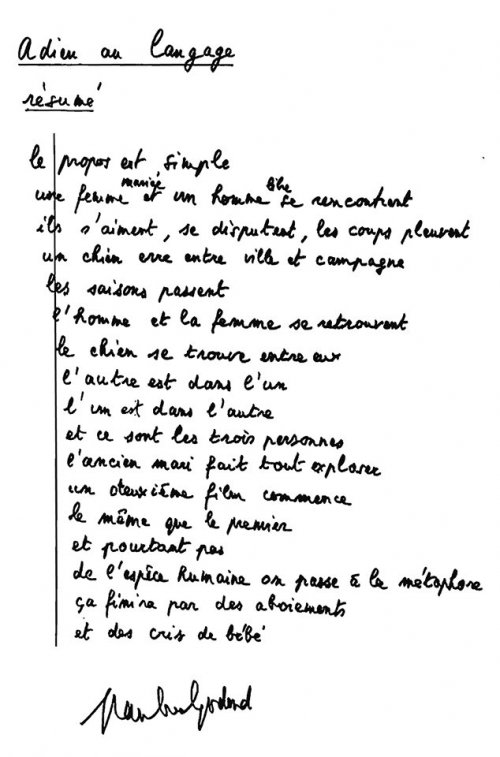 the idea is simple
a married woman and a single man meet
they love, they argue, fists fly
a dog strays between town and country
the seasons pass
the man and woman meet again
the dog finds itself between them
the other is in one
the one is in the other
and they are three
the former husband shatters everything
a second film begins
the same as the first
and yet not
from the human race we pass to metaphor
this ends in barking
and a baby’s cries

It’ll do (although it sounds better in French, so language has not entirely been bid farewell). And you wouldn’t know by watching the film, where it happens in an erratic sequence – “a beginning, a middle and an end, but not necessarily in that order” – interspersed with parallel plots, historical references (including a brief re-enactment of Mary Shelley imagining Frankenstein), historical footage of Hitler, old movies, aphoristic voiceovers, book covers, driving scenes on snowy roads, fields of lurid poppies (Godard amuses himself by repeatedly distorting the colour balance of his various digital recording devices).

And all of it in 3D, not just a little, but as extreme as the lenses and the viewing spectacles will allow – sometimes more so when we are in close-up. 3D also enables some even tricksier fecking around with words. For example, ‘ADIEU’ (farewell) jumps out from the screen, then becomes ‘AH DIEU’ (which sounds the same but means ‘Oh God’), with the Ah hovering in front of the ‘DIEU’.

In common with all Godard films since Notre musique (2004), Adieu au langage is like one of those notebooks artists keep in movies, with sketches, quotations, colour washes, ideas and doodles tumbling over one another, until finally you reach the not-quite-the-end, with the baby crying and the dog barking. Then some titles. Then the real end, which is a delight.

You may ask why, once you have established that spoken language is too laden with history to have meaning and that the camera image, with its Bazinian one-to-one ontology, is open and even to a certain extent free – why go on making the point over and over? But Godard does it, as ever, with such verve, intelligence and humour, that the result (at, I can now reveal, a brisk 78 minutes) is a visual, cinematic and brain-twisting delight. In 3D.

Plus, as no one who has been following Cannes this year should be surprised to learn, the role of the dog – a lurcher cross called Miéville (after Anne-Marie, Godard’s former partner?) – is crucial.

In a word, barking.

Godard’s ‘Letter in motion’ to Cannes