Video essay: The animal menagerie of Rhythm and Hues

And what shoulder, & what art.
Could twist the sinews of thy heart?
— William Blake

There’s an early scene in Life of Pi when, as a young boy, the titular character first encounters a tiger in his father’s zoo. Separated only by iron bars and a few inches, Pi draws dangerously close to the beast, captivated by its feline splendour and fearful symmetry – and above all, a glimmer in its eyes suggesting mysteries of sentience lurking within. “Animals have souls… I have seen it in their eyes!” Pi cries; his father rebuffs him with a brutal proof of the tiger’s inhumanity, while asserting that Pi’s gaze into the tiger’s soul is but an anthropomorphic projection of his own wishes.

Later, when an older Pi finds himself inexplicably trapped on a lifeboat in the middle of the Pacific with the same tiger, he learns to co-exist with the animal by understanding its true nature, and in doing so confronts his own humanity. Pi’s mastering of the tiger also reflects – both literally and metaphorically – the masterful work of Rhythm & Hues, the company who engineered the tiger and other computer generated imagery in the film. And yet the film’s rave review in the Los Angeles Times praised director Ang Lee’s “stunning use of 3-D” without crediting the visual effects efforts led by Rhythm & Hues’ Bill Westenhofer.

“A lot of reviews mention the camerawork and ocean setting without realising that most of those ‘shots’ are created in CG,” says digital effects supervisor Jason Bayever. Animation supervisor Erik-Jan de Boer offers a different perspective: “In a sense it’s a great compliment to our work if people don’t notice our effects, because all we do is in service to building a convincing reality to the story.” 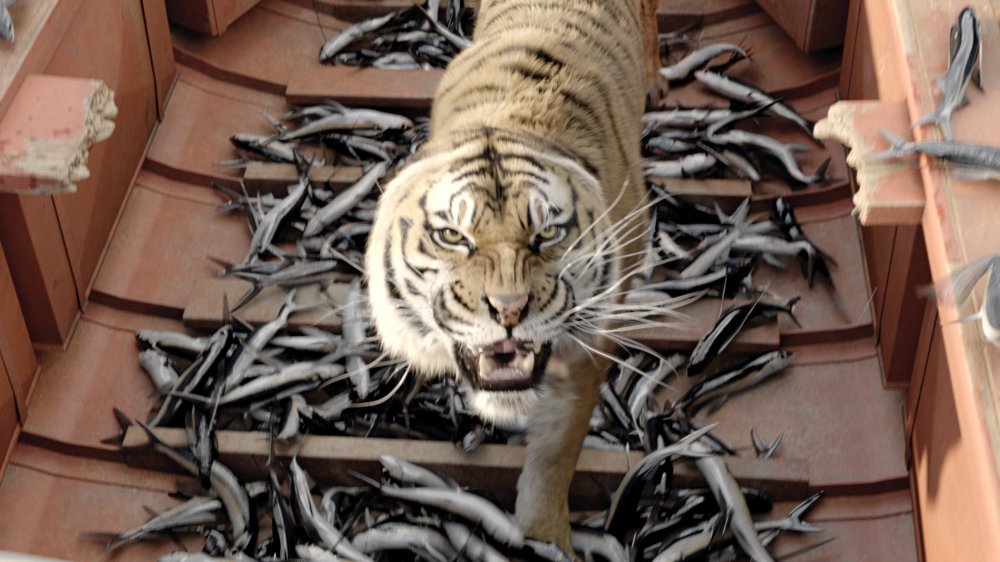 Like many visual effects companies, Rhythm & Hues has quietly thrived behind-the-scenes; and though they may not be household names like Pixar, they are major players in family films by virtue of a special distinction. For the last 20 years, Rhythm & Hues has created CGI animals for dozens of big-budget movies that have grossed hundreds of millions of dollars. You could say that their portfolio amounts to Hollywood’s version of Noah’s Ark, a point made literally by their creation of a boatload of beasts for the 2007 film Evan Almighty.

Rhythm & Hues’ association with state of the art animal CGI predates their work in movies: in 1993, a series of simple but charming Christmastime commercials starring Coke-drinking polar bears put them on the map. Two years later, a little pig named Babe gave them their big movie breakthrough.

Before Babe, movies made animals talk by sloppily synching their mouths to voiceover. Rhythm & Hues developed computer modelling and animation technology to create something more subtle, even artful with their talking animals. Coupled with a script that treated each farmyard resident as a richly developed character, the talking creatures in Babe hit a sweet spot of being realistic and surprisingly human; it was anthropomorphism in the most beguiling sense.

Babe earned Rhythm & Hues their first Academy Award for Visual Effects, was also nominated for Best Picture, and earned $250 million dollars worldwide, more than eight times the film’s budget. The movie’s runaway success effectively kick-started a new Hollywood sub-genre: the computer-generated talking animal movie. The website Boxoffice Mojo even lists a genre called ‘Talking Animal (Live action)’. Of its all-time top-grossers, Rhythm & Hues worked on seven of the top ten, and 14 of the top 20. Over the past 15 years, Rhythm & Hues has reigned as Hollywood’s unofficial zookeeper. 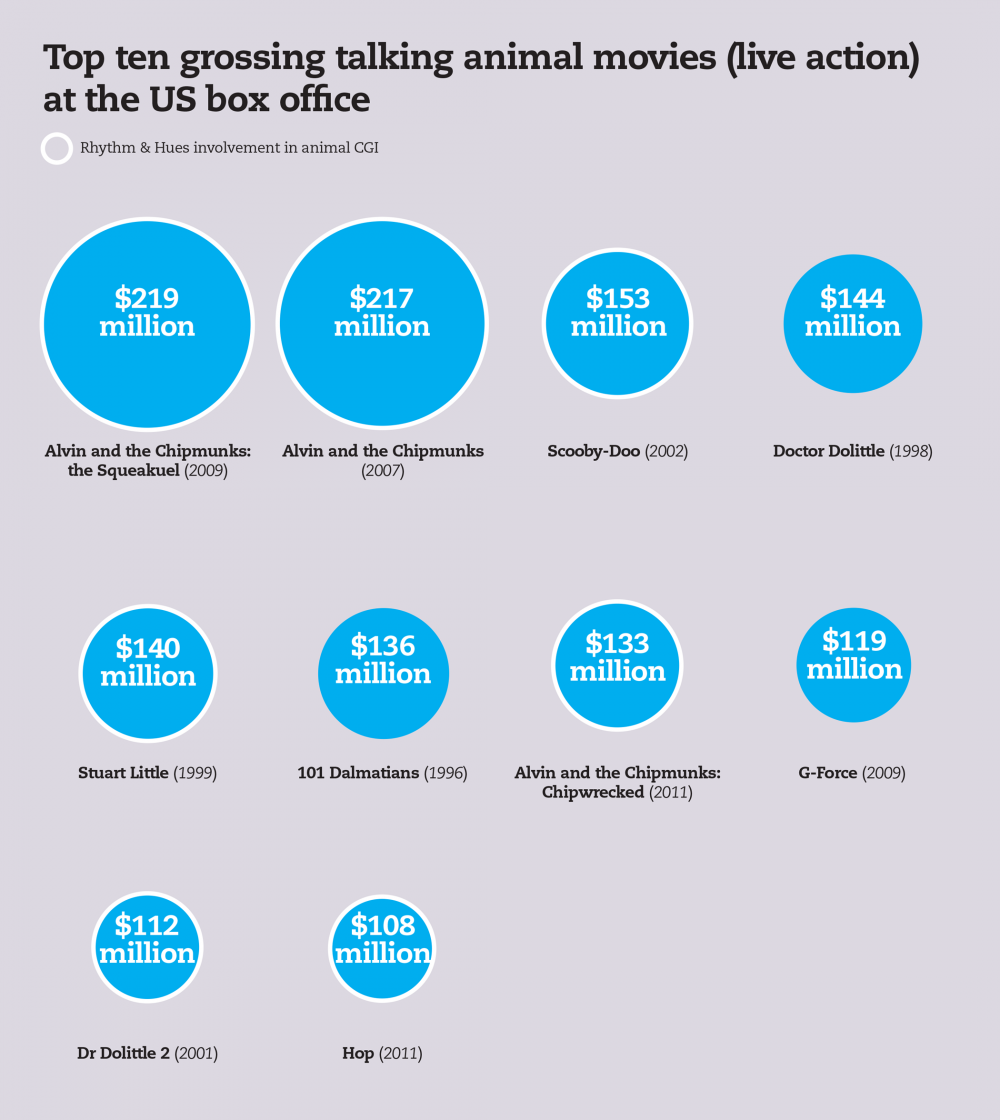 This being Hollywood, with the exciting new technology came the temptation to cash in. The industry pounced on just about every famous talking animal from children’s books, comics and TV shows, with the hope of turning each of them into a family-movie franchise.

These are indeed some of the most profitable films of the past decade, and also some of the most critically reviled. Critics bemoaned these films as a sign of Hollywood’s lack of imagination in shamelessly plundering the back catalogue of pop culture, and were unsettled to see photorealistic live action versions of familiar old cartoons.

“We make no secret that these films are meant for five-year-olds,” says Rhythm & Hues’ co-founder and VP Keith Goldfarb, who engineered its proprietary software. “Talking animals helped fund our business quite a bit. It was a mixed blessing because we got seen as the company that did those films. In our position you can’t really choose what jobs you get.”

In contrast, Rhythm & Hues’ most acclaimed creations are unencumbered by any iconic cartoon standard, allowing the animators to pursue near total photorealistic fidelity to real animals. One then wonders which is more difficult: creating an exact CGI match of real animals, or redesigning famous cartoon animals in a live-action setting?

Whatever the case, one has to consider Rhythm and Hues’ efforts at both ends as part of an ongoing project to establish the laws of animal nature in the CGI movie jungle. These films implicitly ask the question: what are the rules for anthropomorphism in the movies? And what do we, like Pi, discover about ourselves in regarding these creatures? 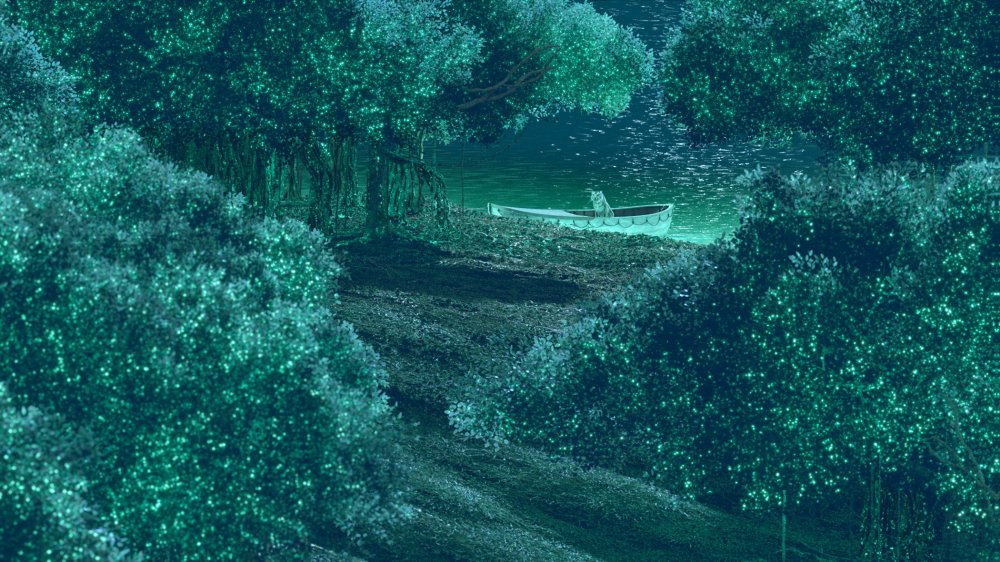 Life of Pi can be seen as the film Rhythm & Hues has been building up to all these years, by taking things they learned from each production from Cats & Dogs to Yogi Bear, integrating their animals in different situations and environments, pushing them to do more, and understanding how all of this can succeed both visually and dramatically. Someone dismissing Yogi as a derivative live-action rehash of an old cartoon may not notice the remarkable degree of success R&H achieved in integrating a hyperactive cartoon bear convincingly within a photorealistic 3-D environment. Not only the bear, but water, trees and bushes are reproduced and animated to be virtually indistinguishable from natural scenery. “The physicality of those moments that allow us to portray those animals realistically is what really excites me,” says De Boer.

All of these films showcase some degree of technical merit, but the more successful films understand a key distinction: it’s not a matter of how CGI animals can be made realistic, or exude human qualities convincingly, but how they can stimulate emotions in human viewers without betraying their animal natures. It’s worth keeping this in mind when looking at The Golden Compass, a film about humans whose souls reside in their animal companions.

This premise of a fluid relationship between animal and human is one that the movie’s screenplay, mired in exposition, doesn’t explore in depth, certainly not compared to the special effects work, which manipulates the expressions and gestures of animals to become extensions of their human counterparts. Here the visual effects, which earned Rhythm & Hues their second Oscar, do not function merely as spectacle, but as a provider of dramatic subtext of great nuance; the animals seem to possess even more depth than the human actors and carry much of the film’s emotional weight.

The intricacy of this work is carried further into Life of Pi, which examines more explicitly the man-animal dynamic; but in this case, for practically the first time in the career of Rhythm & Hues, there’s no explicit anthropomorphism, no easy path to empathy with the beast. The tiger is fully allowed to be itself, feral and unpredictable, even though it’s been manipulated to the last of its ten million computerised hairs (in contrast, Aslan the Lion in Narnia had five million). Here Rhythm & Hues has created an irreconcilable, ferociously inhuman presence, one the film confronts in articulating its own understanding of life. 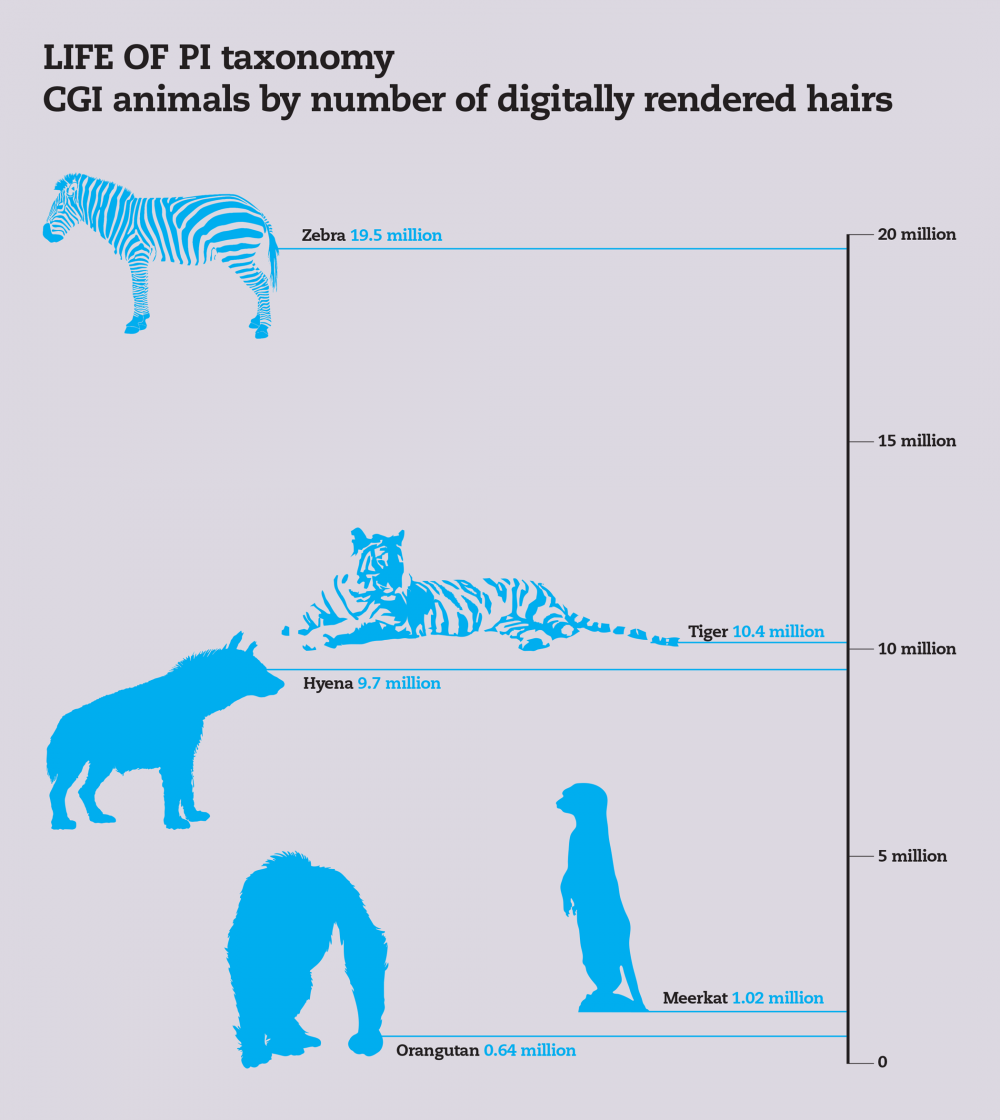 In a way, Rhythm & Hues has taken its digital safari full circle. 17 years ago with Babe it transformed real live-action animals with discreet tweaks to their mouths and faces. They then sought to transform cartoon animals into full-bodied photorealistic forms.

With Life of Pi, they’ve accomplished a work of near-total photorealism, where each painstaking detail intensifies a sense of heightened reality that is cinema, extending beyond the animal into a setting that itself is largely digital. “There are some shots,” Bayever says, “that even blow my mind when I see them and realise that they are 100 per cent computer generated.”

This augmented reality extends to any number of films Rhythm & Hues has affected. “Even romantic comedies today have computer effects where they change the backgrounds or clean up mistakes, “Goldfarb says. “You’re not supposed to notice it, but it’s there and it’s taking up more and more of the screen.”

This company that made its living getting animals to realistically talk has now achieved not only an animal but a CGI world that could easily pass as the real thing, with every pixel manipulated in such a way as to stimulate specific responses in the audience. This ongoing reconstruction of cinematic reality in the digital age calls for a radical reconsideration of where the soul of the moving image lies, and its relationship to the ultimate creature being programmed by these films: the human viewer.