In this issue: Ang Lee’s 3D spectacular Life of Pi, plus the best films of 2012.

In print and digital from 30 November. 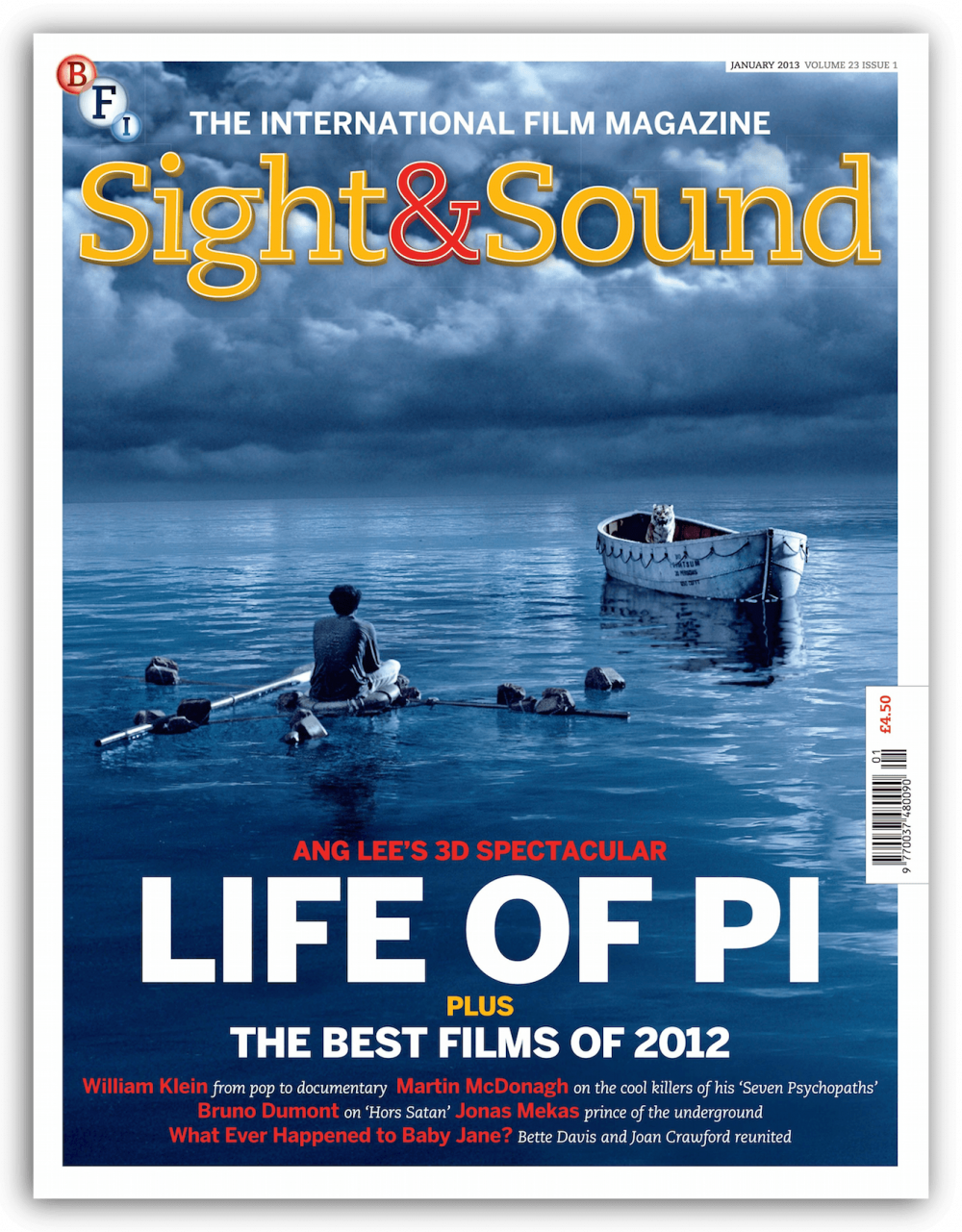 As ever, January is the Janus-faced edition where we look forward and back at the same time. And this year’s, more than ever, proves to be about the moving image in transition, from our cover feature – Ang Lee’s 3D CGI-fest Life of Pi, whose dazzling visuals could only have been achieved with digital technology – to resistance to the demise of analogue films at the Viennale festival, and indeed in the debate pages of our magazine. This month’s Sight & Sound Interview is with genius photographer/filmmaker William Klein, and we celebrate 90 years of prince of the underground Jonas Mekas, with help from Jim Jarmusch, Peter Kubelka, Ken Jacobs, Chantal Akerman and Malcolm Le Grice.

The issue’s sub-theme, meanwhile, is forms of psychological disturbance – whether it’s the sisterly blood feud in the revived What Ever Happened to Baby Jane?, the dilemma of finding enough homicidal types in Martin McDonagh’s Seven Psychopaths or the strange powers of the drifter in Bruno Dumont’s Hors Satan.

Of course, January also means a moment’s pause to survey and reflect on the year just gone; this edition showcases 50 international critics’ 2012 highlights, from Amour (and Alps, and The Act of Killing, and Avengers Assemble) to, well, You Ain’t Seen Nothin’ Yet. And our hive’s ‘top’ film of the year? It might be analogue film projection’s last gasp…

COVER FEATURE: The Sea Inside

In bringing to the screen the magic realism of Yann Martel’s Life of Pi, Ang Lee has set himself his most complex technical challenge yet, finds Roger Clarke.

PLUS visual-effects supervisor Bill Westenhofer and production designer David Gropman on how it was done.

It may be a coincidence, but the seeming demise of film as we know it has coincided with a poll result that enshrines films that cast their eyes back over the history of cinema. Our 2012 year-in-review survey, introduced by Nick James.

Nick James talks to London-Irish playwright-turned-director Martin McDonagh about <strong>Seven Psychopaths, his blackly comic follow-up to In Bruges, while Ryan Gilbey charts the unhappy fates of other screenwriter characters in the movies.

The godfather of avant-garde film turns 90 this month. His life and work are celebrated by Amy Taubin plus Chantal Akerman, Ken Jacobs, Jim Jarmusch and Peter Kubelka.

There Will Be Blood

What Ever Happened to Baby Jane? is one of cinema’s most challenging depictions of womanhood, says Hannah McGill.

To coincide with a retrospective at Tate Modern, the Brooklyn-born filmmaker and photographer discusses his life and work with Brian Dillon.

Mark Cousins on the hidden treasures of Albanian cinema.

Charles Gant on how Dustin Hoffman came to direct Quartet.

Lydia Papadimitriou on a strong and defiant Thessaloniki festival.

Kieron Corless reports from the Viennale in its 50th-anniversary year.

Pamela Hutchinson explores the relationship between silent cinema and the internet.

Brad Stevens wonders if Abel Ferrara is being punished for his absence of postmodern posturing.

Neil Young and Gabe Klinger discuss whether there is a future for celluloid projection in the digital age.

Hors Satan
The Impossible
Life of Pi
West of Memphis

Other new releases reviewed in this issue

Boxing Day
Celeste and Jesse Forever
Chakravyuh
Chasing Ice
Confessions of a Child of the Century
Dead Europe
Fun Size
Gambit
Here Comes the Boom
I, Anna
The Joy of Six
Life Just Is
Love Bite
Love Crime/Crime d’Amour
The Man with the Iron Fists
McCullin
Mental
Midnight’s Children
Neil Young Journeys
The Oranges
Quartet
Rise of the Guardians
Safety Not Guaranteed
Seven Psychopaths
Silent Hill: Revelation
Smashed
Tinker Bell and the Secret of the Wings
The Twilight Saga: Breaking Dawn – Part II
When Santa Fell to Earth
You Will Be My Son

Bonjour Tristesse
The Colditz Story
Films by Victor Erice
Floating Weeds
Gate of Hell
Films by Kim Kiduk
London on the Move: British Transport Collection Volume 10
Long Day’s Journey into Night
Maîtresse
The Films of Marcel Pagnol
Sick: The Life and Death of Bob Flanagan, Supermasochist
Southern Comfort
Films by Jacques Tati
This is Cinerama
A Trip to the Moon

Philip Kemp dips into a compendium of essays about Ealing Studios.

Ian Christie appraises a history of the rise of colour films in the UK.

Tony Leung’s enigmatic cameo at the very end of Wong Kar-wai’s Days of Being Wild marks a turning point in the director’s career.