Film of the week: Seven Psychopaths

With its blocked-screenwriter-in-‘real’-intrigue plot, Martin McDonagh’s self-reflexive, shaggy-dog follow-up to In Bruges tries valiantly to have its cake and eat it, says Trevor Johnston. 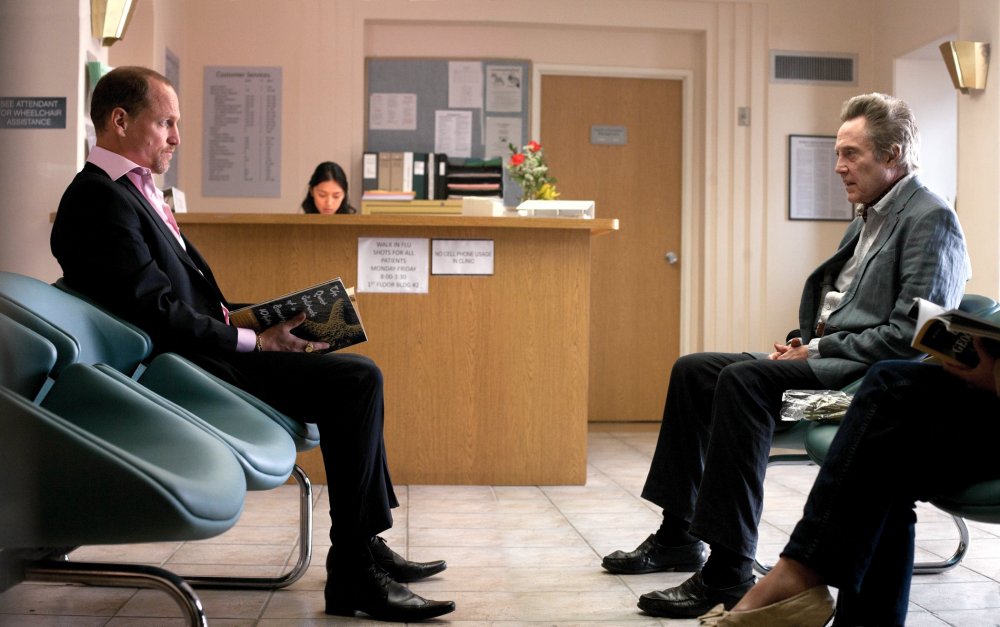 If you’re a screenwriter struggling with a creative block, does it actually get you out of a hole to start penning a script about a screenwriter with a creative block? Martin McDonagh’s work for stage and screen thrives on teasing out such jesting conundrums, and here he sets up Colin Farrell as a boozy Irish screenwriter in LA struggling with a new project he knows will be called ‘Seven Psychopaths’ – except he’s only got one psycho in mind thus far, a determined Vietnamese seeking vengeance for the My Lai massacre on the nation whose soldiers committed the atrocities.

Where next? Farrell has a notion about writing a ‘Buddhist’ action movie that will deliver a non-violent message, but is that really tenable, or is he just fooling himself? After all, if he’s stuck for material, he only has to look around the City of Angels, where a masked killer is wiping out Mafia underlings and leaving a Jack of Diamonds card at the scene of the slaughter.

All this looks as if we’re being set up to ponder the role of the writer trying to stay true to himself while juggling commercial considerations and the simple fact of being surrounded by insane real-life carnage on a daily basis. McDonagh is content to float the idea and then potter his way through an extended shaggy-dog story, taking in a series of darkly comic tall tales that may or may not be based in fact, plus notional character sketches and scene ideas for Farrell’s great work-in-progress. Stuck for material, Farrell (and presumably, by extension, McDonagh) will grab at ideas anywhere he can find them.

Shades of Charlie Kaufman’s Adaptation (2002) here, though the constituent parts could hardly be more different, as we mosey through a landscape of trigger-happy, post-Tarantino Angeleno gangsters and hustlers who are never short of a zippy one-liner. Farrell gives the whole malarkey some ballast as the likeable bumbling scribe, but the film is pretty much a showcase for a wish-list of the coolest Hollywood character performers. Sam Rockwell (the runty best pal) runs the gamut from seemingly hapless loser to unhinged headcase determined to bow out in a blaze of bullet-riddled glory, while Christopher Walken brings his very particular spacey gravitas to the role of scheming dognapper, devoted husband and man with a psychopathic past. What with Tom Waits as a remorseful crazy who spent his younger days as a serial killer of serial killers (or as he describes it, “going around the country killing people going around the country killing people”), and Harry Dean Stanton effective in a small role as a father pursuing his daughter’s murderer to the very gates of hell, the hip quotient here is certainly considerable, and McDonagh of course has the writing skills to get good value out of all his distinguished collaborators. 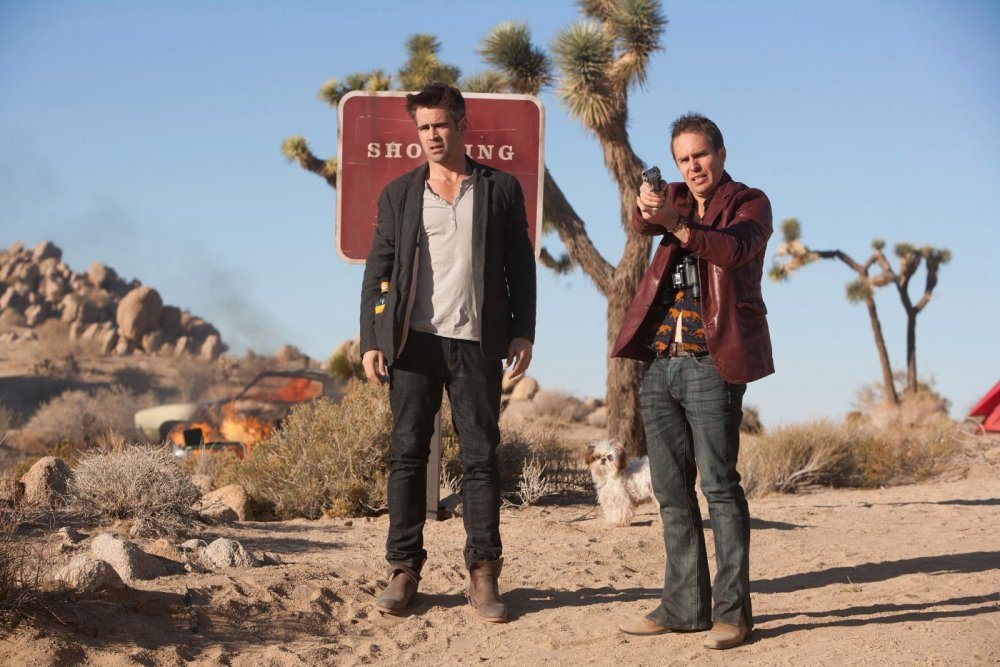 As the proceedings ping from outré slaying to celluloid-savvy musing, blood-soaked fantasy to dark urban legend, the movie is as bright and lively as a pinball machine. In the meantime, the dognapping conceit that will bring Farrell (via scam artists Rockwell and Walken) into life-threatening contact with Woody Harrelson’s overwound mobster, incandescent at the loss of his beloved Shih Tzu, provides just about enough forward momentum to keep the story alive and heading for a traditional desert showdown

It has to be said, though, that McDonagh is taking a lot on in trying to construct a generic innocents-tangle-with-genuine-bad-guys crime-movie plot at the same time as deconstructing the manners and mores which traditionally make up such Hollywood staples – comments about Farrell’s female characters being underdeveloped to a fault, for instance, play against the largely decorative/victim roles with which his actresses are landed here. Partly it’s that the ongoing meta-commentary takes up screen time and leaves the actual story foundation looking slightly skimpy, but there’s also the issue that tantalising us about whether we’re watching the film made from Farrell’s completed script or seeing the accumulation of thought processes and out-of-control events going into the writing of it ultimately leaves everything in a state of indeterminacy. Intentional, one assumes, yet the effect is to drain the film of any kind of moral or emotional substance, even if it’s undeniably diverting from moment to moment. 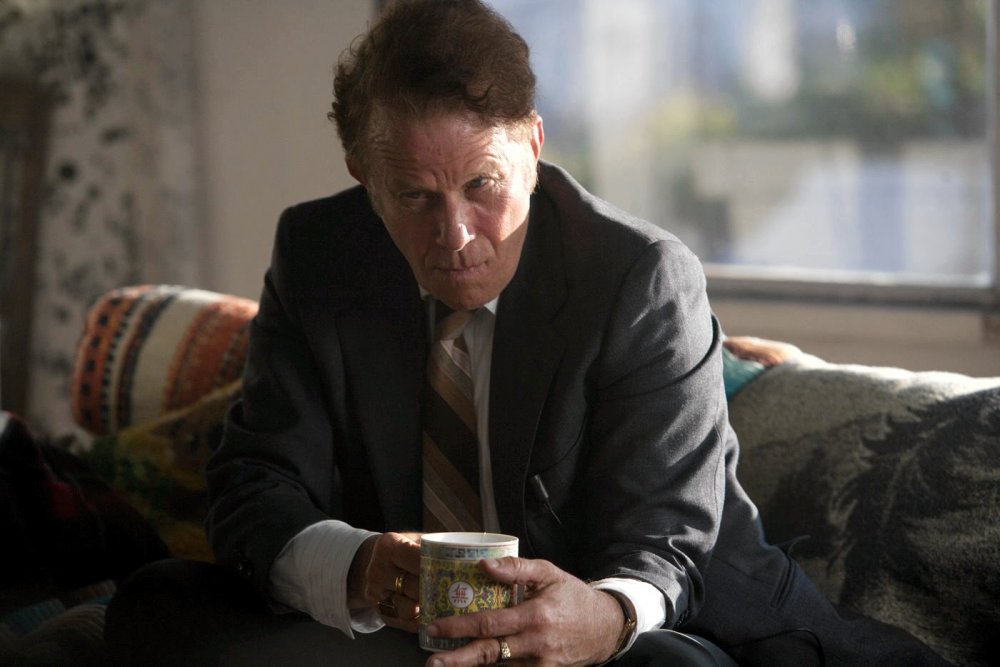 Perhaps that’s why Seven Psychopaths feels less satisfying overall than McDonagh’s In Bruges (2008), where the fugitive Irish crooks’ laugh-out-loud dialogue still allowed for some degree of purchase on the world of genuine moral conflict and choice. If anything, the screenplay here sees some overlap with areas explored in McDonagh’s previous stage work: 2003’s National Theatre production The Pillowman looked at the relationship between a writer’s dark imagination and the horrors unfolding in the world around him, while in A Behanding in Spokane – a 2010 Broadway sell-out starring Messrs Walken and Rockwell – the stuff of urban legend bled over into a black comedy of manners.

There’s something essentially slippery about these two plays that has carried over into Seven Psychopaths, a sense that McDonagh is toying with the audience as to how seriously we might take these snaking, mazy stories about stories. That goes too for this new film, similarly elusive even as it betrays an intoxication with Hollywood populism as sincere as anything in Tarantino. On a formal level it’s much more ambitious and achieved than the nuts-and-bolts assemblage of In Bruges, yet eventually it runs up against a familiar problem: how do you play around with the form without diluting its appeal and pleasure?