Film of the week: Life of Pi 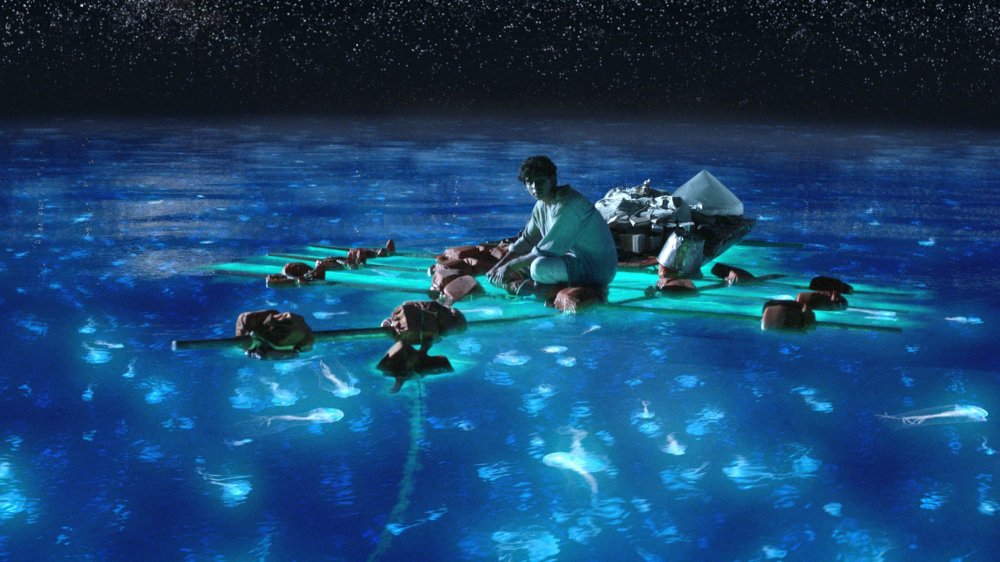 If this is, as many would have it, the fin de cinéma, then the dying of the light is playing a curious trick on the eyes: the silent cinema – doesn’t it seem? – has never been nearer. This extends not only to such obvious content-based examples as 2011’s The Artist and Hugo, but to a bevy of films that, in their frame of visual reference and the superfluity of their dialogue, hearken back to a world that supposedly ended in 1927.

D.W. Griffith’s Intolerance was the obvious precedent for the Wachowski siblings and Tom Tykwer in their Cloud Atlas, while Terrence Malick’s The Tree of Life and, on a far more modest scale, Miguel Gomes’s Tabu draw more or less overtly on the legacy of Murnau. Christopher Nolan’s strongest suit, his spectacular orchestration of catastrophe as it trickles through every stratum of a city’s life, owes a great deal to the Fritz Lang of UFA. (The subterranean Paul W.S. Anderson, however, is the worthier inheritor of Lang’s master-builder mantle.)

Life of Pi does not, at first, seem a promising candidate to add to this list. Its provenance is literary, based on the Canadian author Yann Martel’s 2001 novel of the same name. I have, though, never read Martel’s book: based on the it-will-change-your-life tenor of recommendations by the converted, I assumed it to be ‘wisdom literature’ residing somewhere in the neighbourhood of Kahlil Gibran and Jonathan Livingston Seagull. Nothing in Ang Lee’s film dispels that impression.

The job of filming Martel’s book passed through many hands over the last decade before finally landing in Lee’s. Lee’s screenwriter David Magee ‘solved’ the problem of adapting the unadaptable with a great deal of voiceover, which covers the ruminations on God turned up by Pi’s rummaging through eclectic faiths. The spiritual education of young Pi Patel (who is played in turn here by Gautam Belur, Ayush Tandon and, finally, Suraj Sharma) is recounted by the elder Pi (Irrfan Khan) to interlocutor Martel (Rafe Spall), a device that bookends the film. Philosophical dialogues (and a highly banal first love) are relieved by picturesque backdrops, scenic use being made of Montreal and Pondicherry, the Riviera of the subcontinent.

Taken all together, this material amounts to something like those dippy bumper stickers that spell out ‘Co-Exist’ in the symbols of multiple faiths. But – thank God! – movies are more than delivery systems for ideas, and Life of Pi has more to offer than this exotic Bildungsroman. This is evident when Pi, quite early in unspooling his autobiography, explains that his name is a diminutive of ‘Piscine Molitor’, taken from a grand art-deco pool in Paris’s 16th arrondissement which his champion-swimmer uncle used to frequent. Here is where the 3D glasses that have been pinching your temples start to come in handy, as Lee provides underwater views from beneath Uncle as he slices through the crystal-clear water, water so transparent that he might very well be soaring through the air.

This is a premonition of the startling imagery that is loosed – along with the Patel family’s menagerie – when they set sail for a new life in North America and their ark founders in a storm, leaving the teenaged Pi adrift with a wounded zebra, an orangutan, a sardonic hyena and a full-grown Bengal tiger. Due to a clerical error at the zoo, the tiger had been registered under the name of its captor: ‘Richard Parker’. 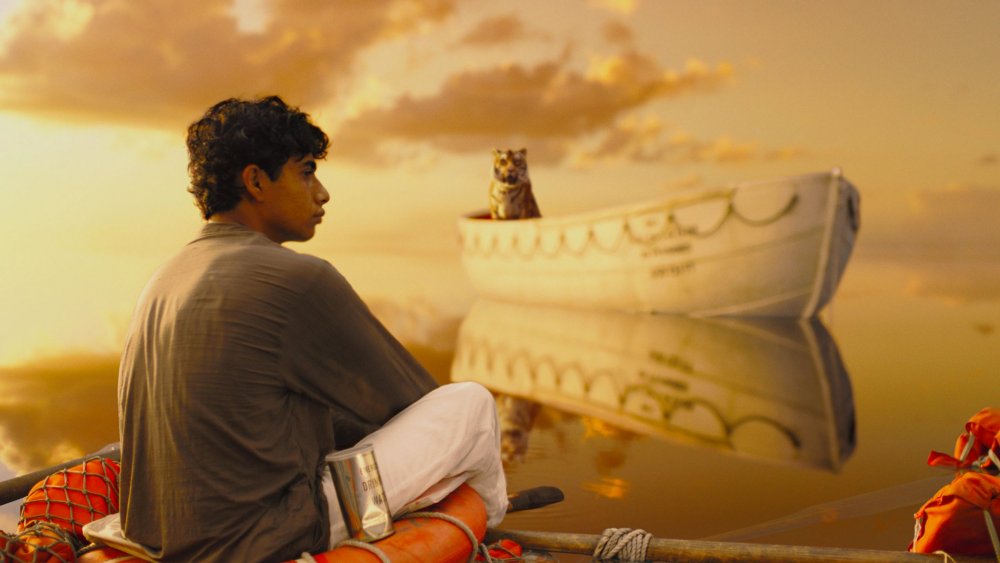 Grafting a proper name on to an animal like this seems a bit of a joke at first, reminiscent of Tom Hanks’s ‘Wilson’ volleyball in Robert Zemeckis’s Cast Away (2000), but the dapper formality of that ‘Richard Parker’ becomes surprisingly apt with time, as to Pi’s eyes – and ours – the creature evolves an empathetic, nearly human personality. We are a long way from Jumanji here, and Richard Parker is a piece of CG sleight with extraordinary, expressive presence, seen seasick, soaked to the fur, starving until the skin hangs off his bony, rolling haunches. The ghostly weightlessness of computer-generated characters has undermined many a film that has placed heavy dramatic burden on them, but at no point in Life of Pi does one lose the sense that there is, indeed, a whopping big great cat weighing down one end of Pi’s dinghy – thanks in no small part to human effect, namely newcomer Sharma’s eloquent, open reaction shots.

That sense of Richard Parker’s real weight is crucial to what Life of Pi does right. Pi’s tentative truce with the tiger is almost certainly a metaphor for something or other – all well and good in its own right – but what makes the film’s middle section such riveting viewing has very little to do with spiritual intangibles and everything instead to do with the care and detail with which Lee involves us in the practical problem of surviving at sea in the company of a Bengal tiger: how one keeps it fed; how one keeps it at a safe distance; how one (hesitantly) helps it back into a boat when it’s at risk of drowning; how one establishes dominance over it at close quarters. And as improbable as the premise is – one of those news-of-the-weird stories of symbiotic interspecies relationships that are much circulated on the internet – the execution gives it a surprising veracity.

Without the sturdy bedrock of realistic detail depicting the truce between Pi and Richard Parker, the fantastic edifice of imagery that Lee builds atop would certainly falter. For, in visualising Pi’s castaway exile – 227 days in open water, comprising a full hour of screen time – Lee shows his hero’s imperilled position as a mixed blessing. By tottering on the ledge of his mortality, Pi gains a front-row seat on the miracles of creation, bearing witness to an out-to-sea world full of astonishing and ethereal visions which are hidden from most people, visions with a hint of hallucinatory awe to them, as though Pi’s perceptions had been sharpened and widened by sun and starvation.

Water and sky run together, making Pi appear as a sort of cosmic traveller – and drawing a visual connection to the zero-gravity weightlessness of the Piscine Molitor. Pi encounters a breaching whale; an underwater cosmos of illuminated jellyfish; a roiling and roaring storm at sea; a blizzard of flying fish; and a sinister island whose surface ripples with innumerable meerkats. There are even in-film aspect-ratio changes, an innovation as old as the masking effects common to the silents, or the suddenly flung-open wings of Abel Gance’s Napoléon. All this is, in a word, Awesome. 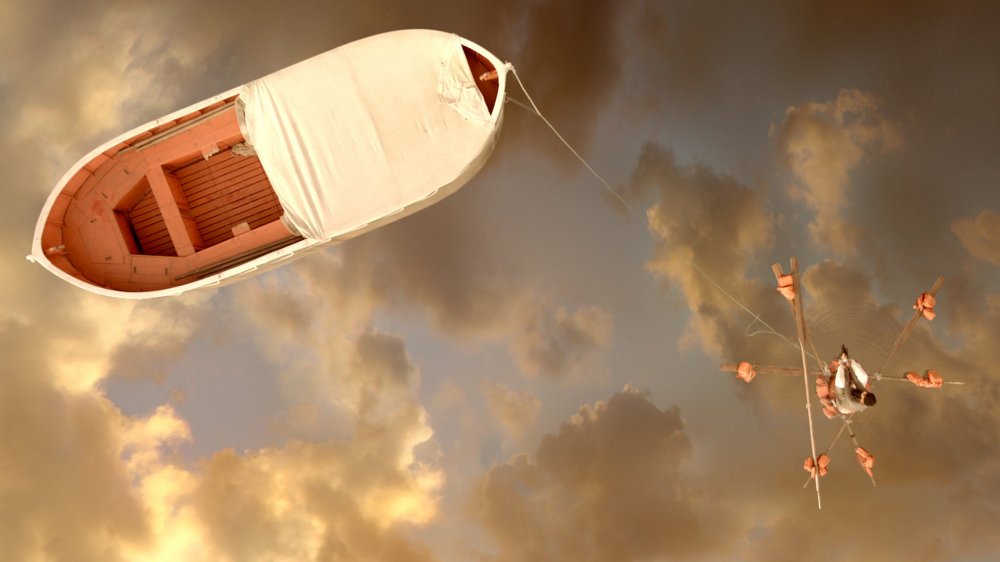 A few words about the Awesome are in order here. The discerning eye sometimes learns to distrust the Awesome, precisely because it is available to everyone, and therefore cheapened. Even the teenagers reluctantly dragged on an art museum field trip don’t need to be instructed on how to enjoy, say, a wall-hogging John Martin or a blockbuster landscape such as Church’s The Heart of the Andes… and so the discerning eye leaves the crowd to linger instead on a little detail in this particular etching hung in an obscure corner which is so very well done, all the more attractive because it is the secret property of the happy few who know where to look for it. I don’t want to praise the Awesome at the expense of such subtle and private pleasures, but neither should the Awesome be dismissed out of hand because too much beauty is a little gauche – and this was the detectable response of many of the self-professed cinephiles leaving Pi’s New York Film Festival opening-night screening.

The problem with Life of Pi – and seemingly everyone talking about the film, even those of us who admire it on the whole, agree that there is a problem – is not its embarrassment of beauty, but instead the problem of many an early talkie. When it is communicating in images, Pi is frequently profound; when it opens its mouth to speak, only tinny commonplaces are heard.