Film of the week: The Missing Picture

from our January 2014 issue 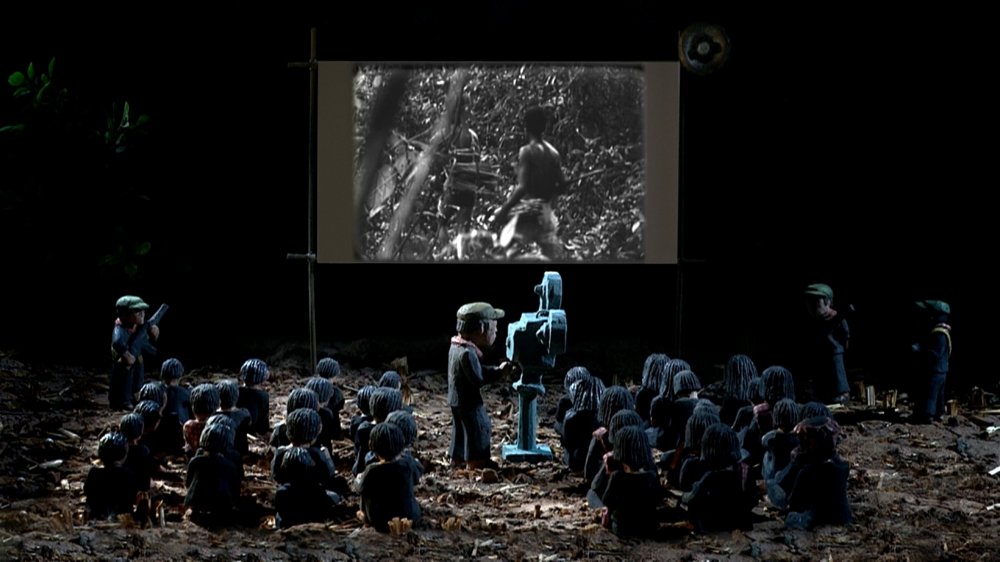 The Khmer Rouge used the term ‘memory sickness’ to describe the feelings of nostalgia among Cambodians for happier – or merely less murderous – pre-regime times, when cities bustled and a vibrant (if deeply troubled) nation lived and breathed. This ‘sickness’, if it couldn’t be reprogrammed out of a person, meant certain death.

Panh, who himself suffered under the Khmer Rouge and whose family perished in labour camps, still has memory sickness. A celebrated chronicler of his country’s darkest times, he has spent nearly 25 years making documentaries that explore the atrocities of the Khmer Rouge era from all angles, notably his indispensable 2003 film S-21: The Khmer Rouge Killing Machine.

Now, as he approaches 50, the pursuit of understanding has led him to look inward. “In the middle of life,” the narrator (and director’s stand-in) says in the opening minutes of The Missing Picture, “childhood returns.” And for this survivor of unimaginable violence, so too return feelings of guilt and anger and a burning need to share images. But these images, of course, hardly exist, mostly because so many films and photographs were destroyed, and nearly every camera after 17 April 1975, the day the communists took Phnom Penh, was an instrument of lies and propaganda for the new regime. These images (family memories, birthdays, dance films – evidence of more human times) are gone forever, so the irresolvable disconnect and hurt remain.

With The Missing Picture, Panh attempts to fill this vast emptiness by recreating his lost images in an original, poignant way. The film, which won the Un Certain Regard prize at the 2013 Cannes festival and has been selected as the Cambodian entry for the Best Foreign Language Film at the 2014 Academy Awards, uses motionless clay statues to create dioramic scenes of happiness, atrocity and poetic expression. The result is at once limited and brutally effective in communicating the emotional stasis of memory and the dehumanisation that comes from the ruthless enforcement of pure ideology.

The Missing Picture begins, under the opening credits, with images of old film canisters and strands of stray celluloid, a directly self-reflexive and self-conscious introduction to Panh’s way of seeing. The next sequence is of waves crashing against the camera, a nicely visceral if slightly overwrought metaphor – one that recurs throughout the film – for memories flooding back into the consciousness. These opening moments suggest that we may be entering Ruminative Masterful Cinema territory, with all signs pointing towards the deeply personal, potentially grandiloquent and at least mildly irritating, despite the obvious weight of the topic. “I seek my childhood like a lost picture,” we hear in contemplative voiceover, “or rather it seeks me.”

Thankfully this feeling of self-consciousness is quickly abated by the deep sense of melancholy that carries through the rest of the film. Abstract live-action images give way to the introduction of the film’s central conceit as we see a series of matter-of-fact close-ups of hands sculpting the clay figures that will become our main ‘characters’. The look of these tiny figurines is innocent and childlike, and therefore immediately quietly disturbing. The initial dioramic scenes of pre-Khmer Rouge happiness have the quality of a kids’ TV programme, rendered surreal by their new context. These are our ‘missing pictures’, lost moments reclaimed in tiny sculpted faces. 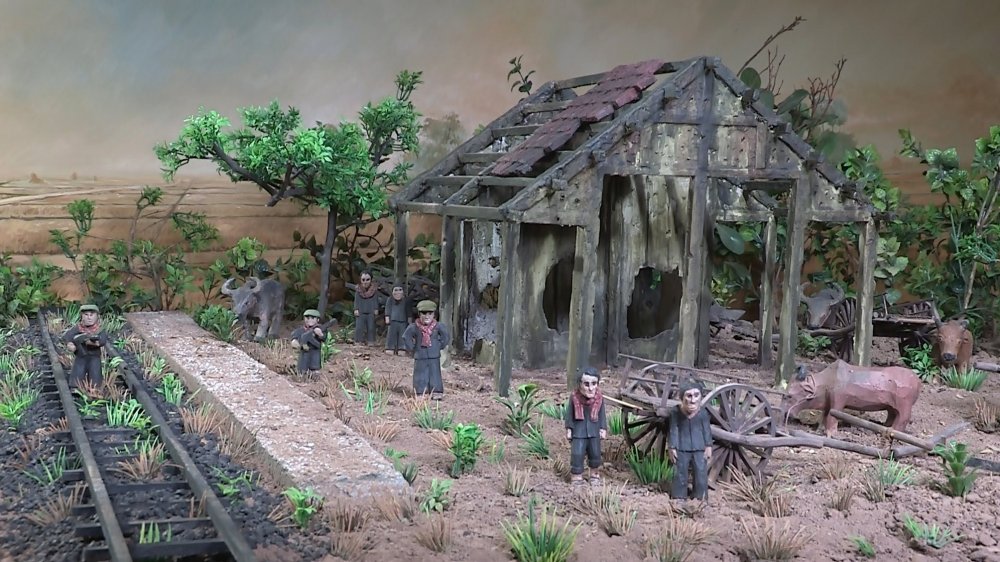 A father, sister, mother and the director himself, wearing a signature spotted shirt: these are Panh’s memories, moulded into objects to restage forgotten stories. The diorama scenes are then violently interrupted by spliced-in archive war footage, which elegantly sets up the film’s primary dialectic: the missing pictures, recreated in clay, are unreal and representational, while the old footage stands in as the official, accepted ‘reality’. That this reality turns out to be Khmer Rouge propaganda, and therefore even phonier than the dioramas, becomes one of the film’s central tragedies.

For much of the movie the clear-headed narration does a good job of laying out the tragic story of the Khmer Rouge’s devastation of Cambodia. The purist ideology of ‘Brother Number One’ Pol Pot’s murderous agrarian revolution is touched on, and though the voiceover is obviously subjective, one gets a real sense of the intentions, hypocrisies and basic functions of what was perhaps the most destructive application of ‘ideas’ in human history.

Riding a wave of political chaos and lower-class anger and exploitation, Pol Pot’s communist army evacuated cities and forced urban middle-class Cambodians (including Panh and his family) into labour camps. In a nightmarish effort to upend all signs of class and capitalism, the Khmer Rouge basically banned everything. Money was burnt, possessions destroyed, families torn apart. All ‘knowledge’ was deemed corrupt and anyone who disagreed (or even looked as if they might disagree) was murdered.

As the dioramas reflect these unfolding tragedies, the film becomes a meditation on loss and the impossibility of recovery. After everything was stolen from Panh and his family, one imagines that it must have taken many years to even conceive of the idea of replacing photographs, films, possessions and memories with clay statues. This deep sense of alienation from the past imbues the figurines with a quality that traditional interview subjects could never match. Even when the clay doppelgangers are cutely (and a little clumsily) superimposed over live-action images, the profound sense of alienation remains. 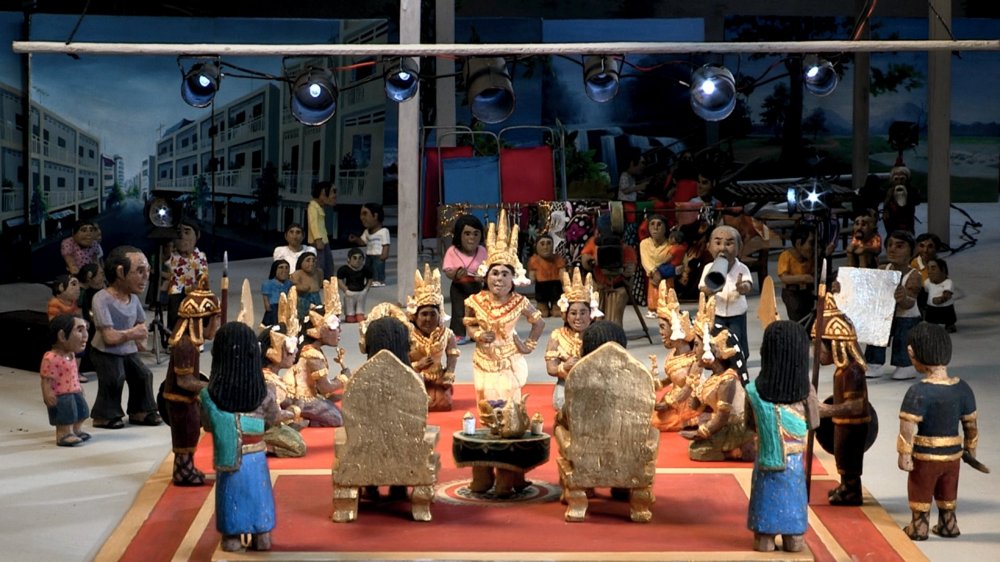 Panh believes deeply in cinema and the restorative, communicative power of moving images. Though their use is visually repetitive at times, these dioramas become an act of defiance in the face of an unmovable mountain of history. The ultimate insult, then, is to see how the Khmer Rouge’s version of cinema was a total lie, a neutered version of events meant to sell the revolution to communist elites around the world – “those in Paris” as the voiceover angrily puts it – who directly or tacitly supported the Khmer Rouge and accepted at face value its covered-up monstrosity. The smiles on the workers’ faces as they toiled away in fields were a deceitful commercial for genocide.

At times Panh’s memory sickness is too coloured with middle-class naivety: the pre-crisis era in Cambodia was much more complicated, of course, than the blissfully dancehall world he recreates with clay (he acknowledges as much by pointing out how the Khmer Rouge manipulated real class issues to gain power).

But this naivety is obviously partly the point. Human beings are flawed creatures and to deny the contradictions and defects of our kind is a most basic evil. The brutality wrought by the humanity-deniers is answered with Panh’s earnest, straightforward (and simultaneously radical) use of clay. That these figurines are the most human thing we encounter during this strange trip through a true nightmare is a testament to the power of cinematic representation.

Like Joshua Oppenheimer’s The Act of Killing (2012), The Missing Picture is about the cathartic power of confronting the darkest corners of human experience through film. The ‘missing pictures’ were destroyed as part of a grand, horrible lie, and the thorough excavation of these stolen memories must happen before anyone can move on. After watching Panh’s film, I’m not sure we’re any nearer to finding closure, but one must applaud this artful, deeply felt attempt.

Related to Film of the week: The Missing Picture