The best films of the year, plus Spike Jonze’s computer romance, Bong Joonho versus Harvey Weinstein, Alexander Payne and Bruce Dern on Nebraska and David Thomson on Robert Redford. In print and digital from 29 November. 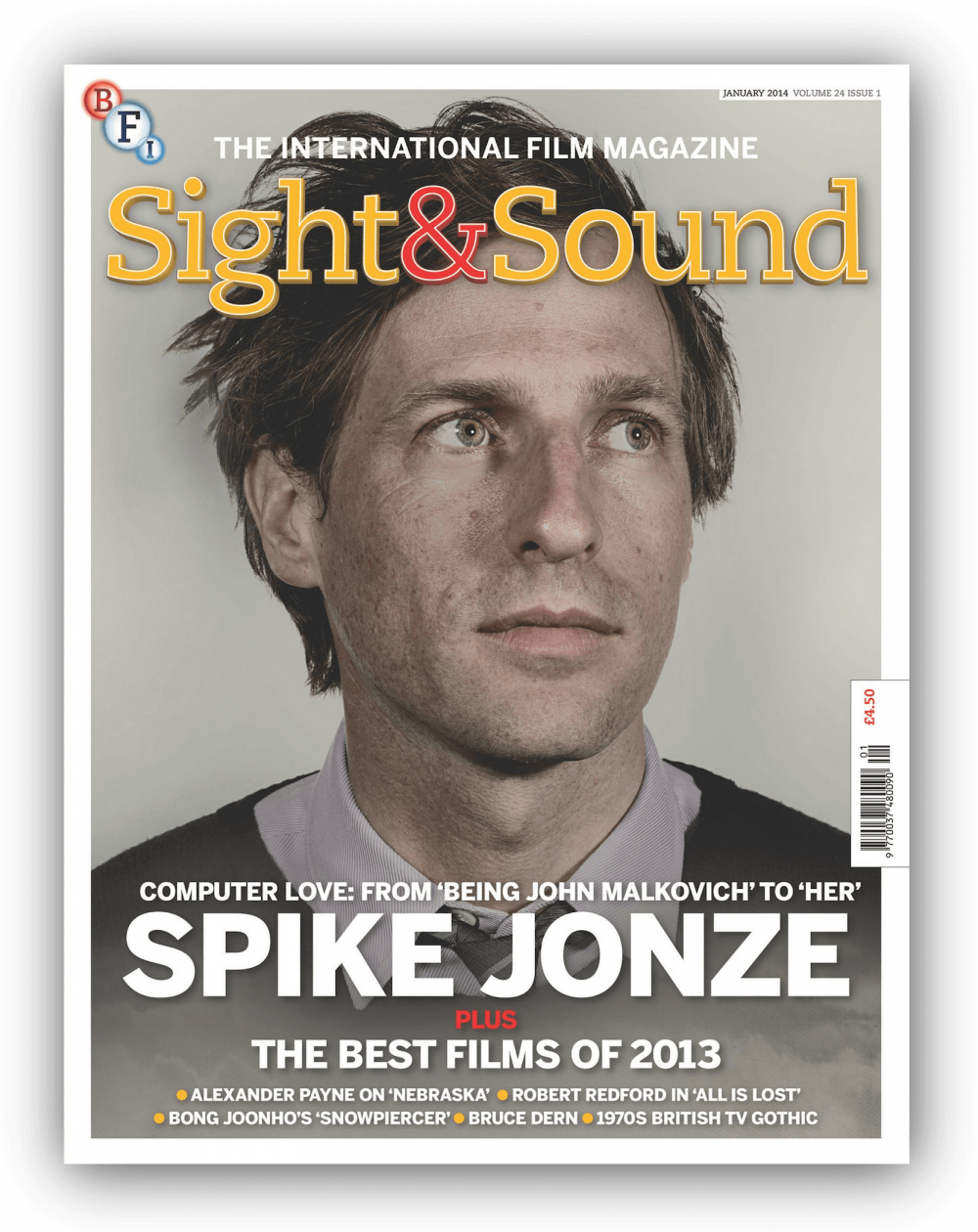 This month we bring you The Best Films of 2013, our annual survey where contributors nominate their top five films of the year. This year, thanks to the number of international critics, curators and academics we polled (over 100!), not to mention the sheer number of new releases, we present a top 30 films for the first time, alongside reflections on the high from our editor Nick James and multiple contributors. But the big news is at the top, where a documentary about genocide, reenactment and the movies has remarkably taken top spot over Alfonso Cuarón’s space dispatch. (Read the top ten results and highlights from our editors here.)

The January issue though doesn’t just look back, but forward to upcoming releases, and with Spike Jonze’s new feature Her, to a future where a man can fall in love with his computer. Equal in imagination to any of Jonze’s previous films, Her is as much a love story as it is a sci-fi reflection on technology and its role in our lives.

“I tried to make a movie that expresses all the contradictions in my own feelings, not only about technology but also in terms of romantic relationships” says Jonze. Talking to James Bell the director dissects his creative process and the visual influences behind his vision of the future, while also looking back over his career, to how his shorts and music videos inspired his most personal feature yet.

Bong Joonho’s fifth feature Snowpiercer is one sci-fi dystopia that we hope we’ll see soon on UK screens. But will it be in the cut that the director intended? The film, about a train carrying the only human and animal survivors left after a new ice-age, has proven a hit in both France and Korea, but the director is currently embroiled in a dispute with the Weinstein Company over a cut version they want to release in English-speaking territories. Here, Tony Rayns details the full history of the Harvey Weinstein / Snowpiercer saga, and reminds us how past Asian releases have been fared with the man they call ‘Scissorhands’.

Over the course of his six features, Alexander Payne has demonstrated a canny ability to walk the line between mainstream acceptance and indie credibility. His latest film Nebraska is a black and white road movie about an old man’s deluded interstate quest to cash in what he believes is a winning, million-dollar prize-draw ticket. In this month’s Sight & Sound Interview, Payne goes into detail about the difficulty of convincing a studio to shoot in monochrome, what he thinks about the current state of Hollywood and why unlike lots of other indie auteurs, he’s not going to turn to television just yet.

Meanwhile Nick Pinkerton talks to Bruce Dern about what attracted him to the near-silent role of Nebraska’s Woody Grant, and how he got started in the movies 50 years ago.

J.C. Chandor’s All Is Lost is an “unremitting story of physical adventure and ordeal. Its concentration is so intense you may feel exhausted after the screening” promises David Thomson, who speaks to the director about working with Robert Redford, who turned his back on his screen persona to portray an ordinary man facing extraordinary challenges.

Our comprehensive reviews pages include in-depth looks at The Missing Picture, Fill the Void, The Railway Man and The Butler, as well as one of Tarantino’s favourite movies of 2013, Big Bad Wolves.

Meanwhile our Home Cinema pages review a new collection of British TV gothic horror, the first volume of Martin Scorsese’s World Cinema Project and a new DVD compendium which reminds us that John Ford wasn’t just a director of westerns.

Her, the story of the love between a man and a computer, feels like Spike Jonze’s most personal film yet. But, the director says, from features to pop videos, it’s all personal. He talks about alienation and romance in the age of smartphones and Jamba Juice. By James Bell.

Films of the year

The sheer number of films screening in 2013 might have made it harder than usual to predict a winner in our poll, but it has also meant the quality of those in the running has never been higher. By Nick James.

☞ Read our top ten films and highlights from our editors here.

Plus: 55 critics review the year in cinema.

Blockage on the line

Bong Joonho’s Snowpiercer was one of the most anticipated films of 2013. But while it has been a hit in France and Korea, English-speaking audiences won’t be able to see it for some time to come. This is more than just a case of the wrong kind of snow. By Tony Rayns.

The old man and the sea

Robert Redford’s intense, elemental performance in J.C. Chandor’s exceptional survival drama All Is Lost sees the actor turn his back on his screen persona to portray an ordinary man facing extraordinary challenges. By David Thomson.

With his idiosyncratic, gently comic films, the director has shown a canny ability to walk the line between mainstream acceptance and indie credibility – and his latest, the bittersweet black-and-white road movie Nebraska, is no exception. Interview by Neil McGlone.

PLUS The actors: Bruce Dern

The star of Nebraska explains what drew him to the near-silent role of Woody Grant, and casts his mind back over 50-plus years in the fray. By Nick Pinkerton.

I lost it at the feelies

In the frame: Seriously funny

Effortless, indifferent, seemingly unaware that he was being funny, Buster Keaton was a clown the 21st century can take seriously. By Pamela Hutchison.

In cinema, sex and nudity go hand in hand: Jane Campion’s The Piano reminds us that you don’t have to take your clothes off to have fun. By Hannah McGill.

On the eve of the rerelease of The Night of the Hunter, we pick other classic films by actors that remain their sole directorial effort.

The Missing Picture’s Cambodian director Rithy Panh discusses the transformative power of art and his obligation to honour the dead. By Nick Bradshaw.

How a director chooses to frame a film raises important political questions of power, inclusivity and the male gaze. By Mark Cousins.

Preview: In remembrance of things past

Director and cinephile Peter von Bagh is a cultural institution in his native Finland but his work remains unjustly neglected abroad. By Olaf Möller.

The music and feminist anger of the artists associated with the riot grrrl movement lives on in a series of DIY movies. By Frances Morgan.

The tradition of telling ghost stories at Christmas has haunted cinema almost since the birth of film itself. By Bryony Dixon.

The work of LA art collective Asco shows that truly effective protest must include a vision of the future as well as a critique of the present. By John Beagles.

Fill the Void
Her
The Missing Picture

Look into the dark: Robin Redbreast, Dead of Night, Supernatural, Schalken the Painter

The lights were going out all over 70s Britain – and the darkest place of all was on TV, where gothic horror was flourishing. By Jonathan Rigby.

Some remarkable foreign films are being brought out of the shadows by Martin Scorsese’s World Cinema Project. By Michael Brooke.

The Beauty of the Devil
The Criminal Code
Dr Mabuse, Der Spieler
Gaslight
Films by Tobe Hooper
Le Joli mai
The Night of the Hunter
Nosferatu
The Uninvited
The White Dove/Josef Kilian

John Ford is best known as a director of westerns – but a new DVD collection reminds us that he was so much more than that. By Nick Pinkerton.

Kim Newman enjoys yet another retelling of the life of Roger Corman.

Jack Clayton’s version of The Turn of the Screw has all the bleakness and ambiguity of the original – in spite of the studio. By Christopher Frayling.