Film of the week: Frankenweenie

Tim Burton’s third animated feature resurrects both his own early student experiments and the black art of hand animation – and marks an electrifying return to form.

from our November 2012 issue 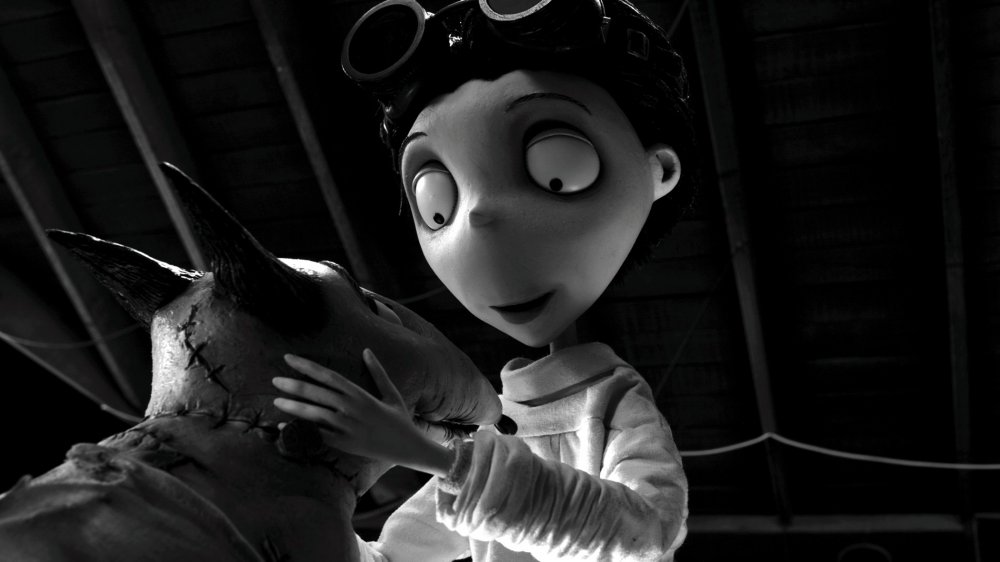 At a time when digital is increasingly a substitute for the ‘real’, Tim Burton’s third animated feature Frankenweenie – after the Oscar-nominated The Nightmare Before Christmas (1993, which he wrote and produced) and Corpse Bride (2005) – looks firmly to the past for inspiration, using gorgeous stop-motion animation filmed in luscious black-and-white to (re)tell the moving story of young Victor Frankenstein and his pet bull terrier Sparky.

A bright yet solitary ten-year-old, Victor delights his family with the amateur sci-fi films he makes with Sparky in the lead role, but Victor’s parents are increasingly worried because he doesn’t seem to have any friends other than his pet. When Victor is invited to take part in a science contest, he is only allowed to do so on condition he join the school baseball team. Unfortunately, as luck would have it, the first time Victor finally hits the ball off the pitch, Sparky is run over by a car when he tries to fetch it. But, inspired by the experiment that his utterly eccentric science teacher Mr Rzykruski conducts with electricity on a dead frog, heartbroken Victor makes some small adjustments in his attic lab and manages to bring Sparky back to life. Inevitably, when his schoolmates and the local townsfolk discover the outcome of his experiment, all hell amusingly breaks loose.

If there is a strong feeling of déjà vu to all this (or, perhaps more appropriately, a sense of resurrection), that’d be because Burton has done this before. His first job as a graduate from CalArts was as an animator for Disney, where he was given the go-ahead to make the critically acclaimed animation short Vincent (1982), about a boy who wants to be like Vincent Price – it’s narrated by Price himself – and whose experiments on his dog Abercrombie turn his pet into a monster. The success of this project enabled Burton to make the live-action short Frankenweenie (1984), on which this latest feature is based. Problem was that, after negative test-screenings, the story of Victor’s scientific shenanigans (which starred Shelley Duvall and a very young Sofia Coppola) was deemed too scary for children and shelved. Burton was sacked by Disney, and the first ever uncensored appearance of the short was as an extra on The Nightmare Before Christmas DVD.

Fast-forward almost 30 years and 2012’s Frankenweenie is the first feature animation film that Burton has directed for Disney – though ironically it could be considered scarier and more violent than the original. Returning to the drawings he created for his 1984 short, Burton employs the talents of some of his usual bunch of collaborators to breathe life into them: production designer Rick Heinrichs, whose impressively detailed work is essential in creating a literally three-dimensional setting for the fictional town of New Holland; and composer Danny Elfman, whose instantly recognisable style rounds off a fully evocative experience. After a run of disappointing films of late, the result is ravishing, giving a welcome sense of Burton returning to his roots, since both the 1984 and 2012 versions display all the key themes and obsessions that have become staples throughout his career: the romantic outsider; the trappings of horror encased in a broadly 1950s aesthetic; and, crucially, a challenging of the conformist norms of North American suburbs, filtered through and magnified by a young misfit’s perceptions.

Perhaps more significantly, whereas in the original the sense of threat emanated solely from the adults (and the main POV was the dog’s rather than Victor’s), the most menacing characters this time round are Victor’s bewitchingly freakish schoolmates. As such, the young protagonist is already an outcast, a young prototype of Burton’s antiheroes – from Edward Scissorhands to Jack Skellington and Sleepy Hollow’s Ichabod Crane. Although generally mistrusted and misunderstood by the people around them, these castaways from life are actually driven by an active, passionate appetite to look/feel/go further, which opens up a whole new world of sensations. Because in the end, it’s all a matter of subjective perception, and Victor, like all his adult reincarnations, is impelled by a necessarily childish, inquisitive, open mind towards discovery of the surreal (a point of view even more clearly elucidated in Burton’s illustrated book of rhymes, The Melancholy Death of Oyster Boy & Other Stories, about a group of peculiar kids who are close kin to Victor). 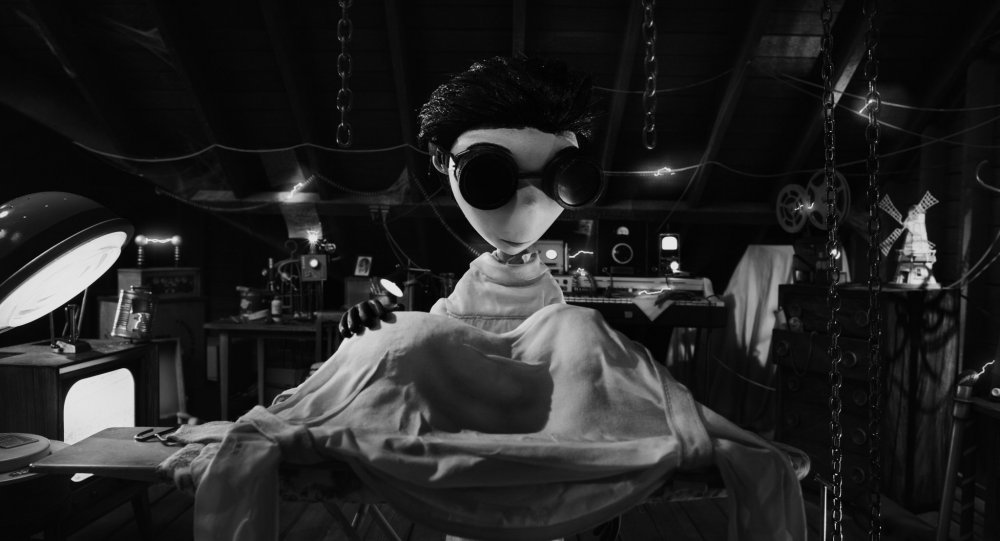 Burton has often referred to the loneliness imparted by this awareness of otherness at an early age as a mark that never leaves you, so it’s not surprising that melancholy is one of the key ingredients in Frankenweenie, as it is in the rest of Burton’s work. Yet here it’s not so directly emotional, instead filtered through (and distanced by) a series of cinematic and literary references that position the film as being aimed at adults as much as younger viewers, since the former can relish nods to Burton’s earlier works, as well as to his most obvious influences and recognisable icons of the horror genre: Godzilla, Dracula, Frankenstein, the Mummy… When the electrically charged Sparky rubs noses with next-door poodle Persephone, the sparks between the two dogs produce two white strands of hair on either side of Persephone’s beehive, Bride of Frankenstein-style.

Admittedly less eccentric and more classic in style than some of Burton’s acclaimed earlier works (or indeed than the less fortunate projects of late, such as the cartoonish Dark Shadows or the garish Alice in Wonderland), Frankenweenie is still chock-full of the filmmaker’s old dark magic. The rapport between Victor and his dog (mostly autobiographical) is tangible and beautifully rendered. Despite the marked presence of death and loss, the tone is gently moving, the humour deadpan and subtly tongue-in-cheek. Social comments are sharp but also redeeming on the whole. And what drives the narrative forward is children’s contagious faith in a different reality.

Two years in the making, most of the sets and puppets in Frankenweenie (the latter all handmade and hand-painted) were both created and shot in black-and-white. The result is stunning, capturing not only the nostalgic aura of many an old film (or a film watched on an old TV set), but also conferring a brilliant play of light and shadow that enhances volume, in turn rendering the use of 3D purposeful. Real props (as opposed to a blue screen) allow the camera to get physically right under the film’s disquieting surface, literally floating through the set, peeking around corners and into the shadows. This is particularly effective in the scenes that take place in the pet cemetery: when Sparky, tired and frightened of the world of the living, returns to curl up by his tombstone, there is a palpable sense of loneliness, weariness and weight. 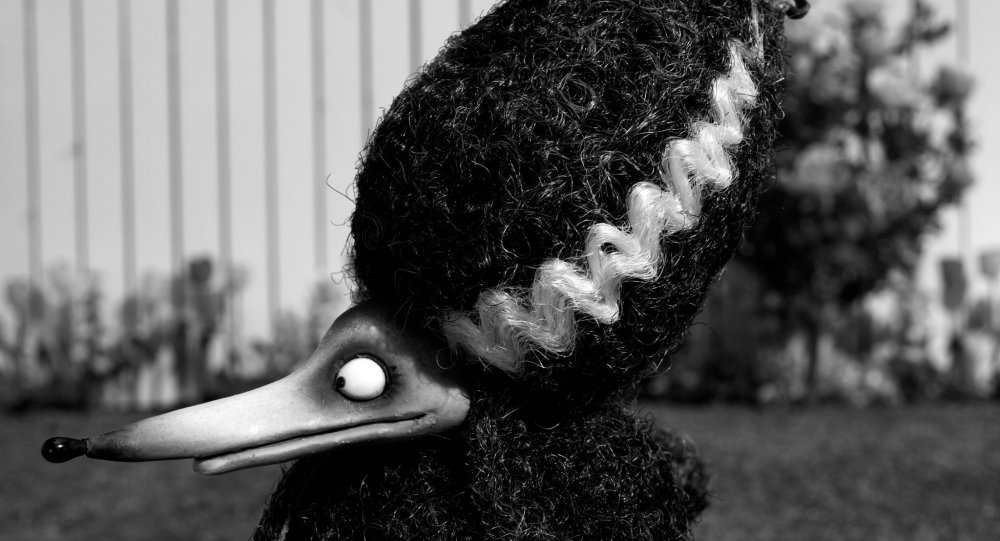 In the end, the core theme of resurrection applies not only to Victor’s stitched-up pet (as well as to childhood candidness, and to the more personal cornerstones of Burton’s career), but more significantly to a tradition of animated filmmaking that has been slowly disappearing under pressure from predatory new technologies. With Frankenweenie, Burton manages to revive Disney’s most celebrated storytelling traditions and combine them not only with beautifully crafted animation but also with the added bonus of a somehow naturalised 3D.

As such, form literally mirrors content – as Burton has noted, stop-motion basically consists of bringing to life an inert object – to conceive something fresh and new for the senses. After all, Burton’s films are full of inventors whose main purpose is to envisage the impossible and to function as links between the real and the unreal, life and death. Thus Burton manages to demonstrate what Mr Rzykruski explains to young Victor – that “science is not good or bad, but can be used both ways”.

Related to Film of the week: Frankenweenie