Christopher Nolan talks WWII epic Dunkirk and his commitment to real film. Plus Sofia Coppola on her dream-like The Beguiled, New Wave icon Jean-Pierre Léaud looks back, and Jane Campion and Elisabeth Moss expose the seedy side of Sydney in Top of the Lake. 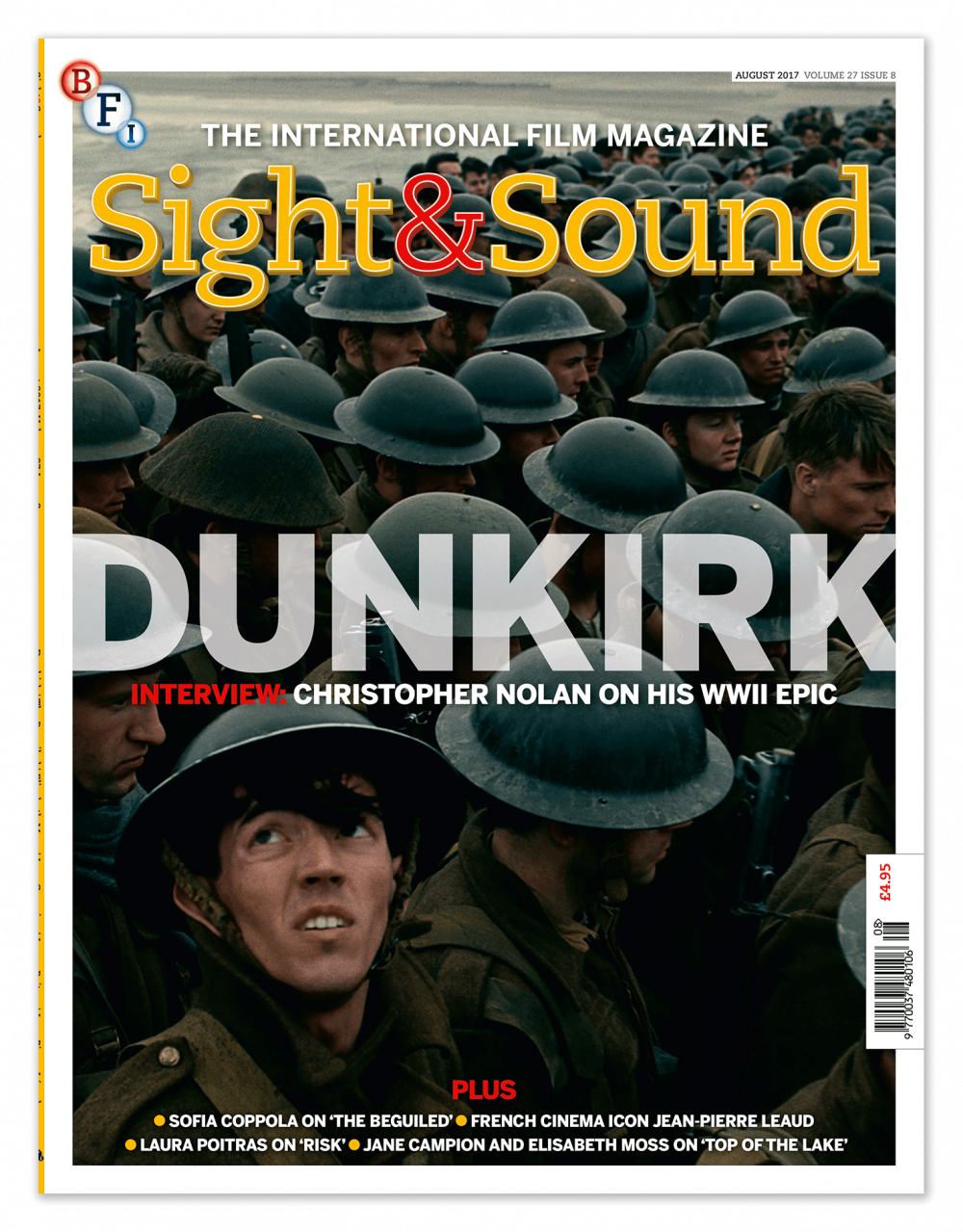 In our August issue we sit down with the most successful British filmmaker of our time, Christopher Nolan, to discuss his latest film, the World War II epic Dunkirk. The film may plunge viewers into the bloody heart of the epic rescue of Allied troops from France at the start of the war, but as Nolan explains to Nick James, he was determined to frame it as a tale of suspense and survival, not a traditional war film. “To me, the element of it that was most fascinating and distinctive was the race against time.” Nolan explains. “[We decided to] approach the ﬁlm as a suspense thriller, as a story of survival rather than a war ﬁlm. We’re trying to put the audience into the boots of soldiers on that beach or into the cockpit of the Spitﬁre flying above it, putting them on a boat coming over to assist with the evacuation”.

Nolan discusses the great classics of suspense cinema that influenced his approach and talks about the great physical challenges that come with making a film on the scale of Dunkirk.  Having shot Dunkirk entirely on large-format 65mm stock, and programmed a season of classic films playing throughout July at BFI Southbank, all shown on 35mm prints, Nolan reaffirms his commitment to the vital importance of the physical medium for cinema.

Alongside our interview with Nolan himself, James Mottram speaks to two of the director’s closest collaborators, his longterm producer and partner Emma Thomas and DP Hoyte van Hoytema about the particular challenges of making the film.

Where Dunkirk is a physical, action-based take on suspense, Sofia Coppola’s gauzy, dream-like The Beguiled, a feminine reinterpretation of Don Siegel’s 1971 film about a wounded soldier taken in by a group of women at a Southern boarding school during the American Civil War, takes a more interior, psychological approach. Coppola talks to Jessica Kiang about working with Nicole Kidman, Kirsten Dunst and Colin Farrell, about the controversy the film has aroused and about the fairytale aspects of the story.

Like Coppola, Jane Campion is another director whose work has long focused on the lives of female characters, something particularly evident in her acclaimed multi-part television crime drama Top of the Lake. As Top of the Lake returns for a second series on the BBC this summer, following the detective character played by Elisabeth Moss from New Zealand to Sydney, and revealing the city’s dark underbelly of prostitution and the exploitation of immigrant women as sex workers, Isabel Stevens talks to Campion and Moss about their work together, while Hannah McGill profiles Moss, one of the most exciting and eminently likeable stars at work today, who has shone in complex roles with a feminist edge one from The West Wing to The Handmaid’s Tale to Top of the Lake.

If Moss is very much the actor for our times, then the great Jean-Pierre Léaud, whose appearance as a 14-year-old in Francois Truffaut’s New Wave-launching debut The 400 Blows in 1959 granted him instant screen immortality, was the defining face of the cinematic upheavals of the 1960s. But time waits for no one, a fact reflected in Léaud’s performance as the ailing Sun King in director Albert Serra’s latest film The Death of Louis XIV – a film that offers both a quasi-documentary portrait of the actor’s own frailty and a poignant reflection on mortality for all those who have watched him growing up on screen. As the film is released in UK cinemas, Jonathan Romney speaks to the great icon of French cinema about his life and career, and also hears from Serra on why he likes to encourage a little confusion on set.

Finally in this month’s features, Nick Bradshaw speaks to documentary filmmaker Laura Poitras about her new film Risk, about Julian Assange, the founder of WikiLeaks. Assange may present himself as a crusader for radical transparency, but as Bradshaw finds and Poitras confirms, the portrait of him that emerges from Risk, the result of years that the filmmaker Poitras spent shadowing him, is notable for its murkiness and ambiguity.

Elsewhere in the issue Andrew Male talks to Kasper Collin, director of a new film about jazz great Lee Morgan, and James Mottram talks to writer and comedian Kumail Nanjiani about the trauma behind his new romcom The Big Sick. In our Wide Angle section Robert Koehler hails the phenomenal rise of Latin American film, Pamela Hutchinson reports from the San Francisco Silent Film Festival, and Esther Leslie surveys the dizzying, shocking animations of Jordan Wolfson.

We also review all the month’s new theatrical releases, including Terrence Malick’s Song to Song and the post-apocalypse suspense-horror It Comes at Night, and survey the best of the new Blu-ray and DVD releases, and the most interesting new film books of the month, including a new volume on the life of Ava Gardner.

All this and much more besides. 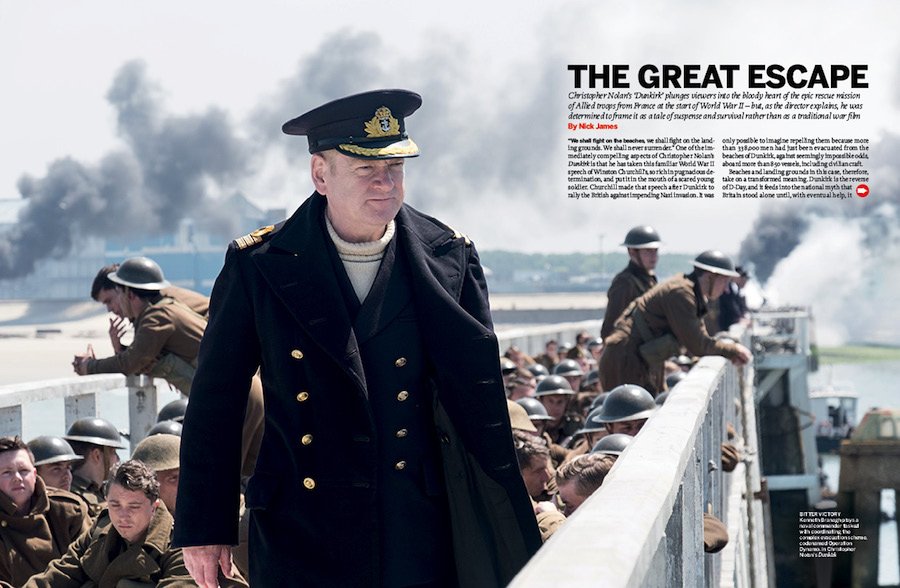 Christopher Nolan’s Dunkirk plunges viewers into the bloody heart of the epic rescue mission of Allied troops from France at the start of World War II – but, as the director explains, he was determined to frame it as a tale of suspense and survival rather than as a traditional war film. By Nick James.

Dunkirk producer Emma Thomas met Christopher Nolan when they were students at University College London, and produced his short film Doodlebug in 1997. She has worked on all of Nolan’s features since his debut Following in 1998, and co-founded their production company Syncopy in 2001.

Dutch-Swedish cinematographer Hoyte van Hoytema’s credits include Let the Right One In (2008), Tinker Tailor Soldier Spy (2011), Her (2013) and Spectre (2015). Dunkirk is Hoytema’s second collaboration with Christopher Nolan, after Interstellar (2014). 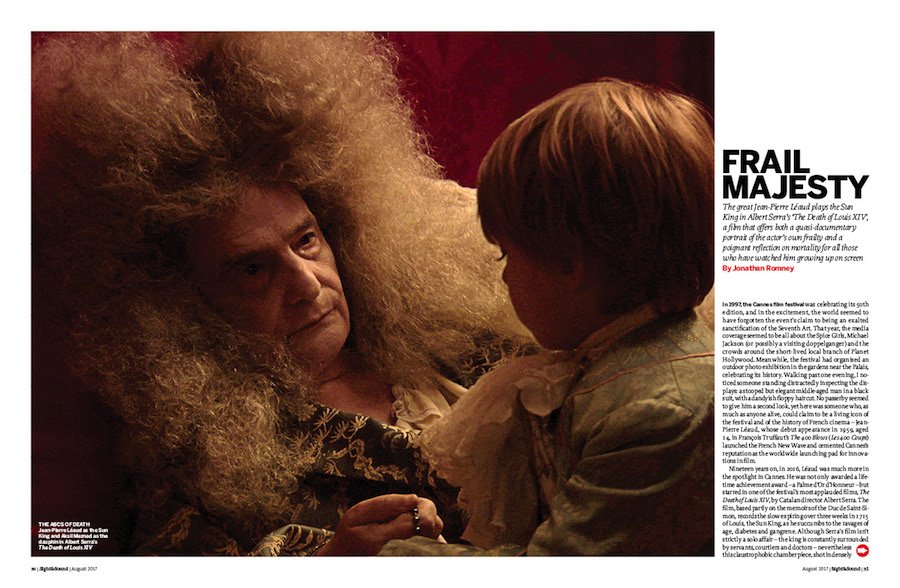 The great Jean-Pierre Léaud plays the Sun King in Albert Serra’s The Death of Louis XIV, a film that offers both a quasi-documentary portrait of the actor’s own frailty and a poignant reflection on mortality for all those who have watched him growing up on screen. By Jonathan Romney.

The story of his death

Catalan director Albert Serra explains why a little confusion on set can help create just the right combination of chaos and mystery to ensure he gets the very best out of his actors. By Jonathan Romney. 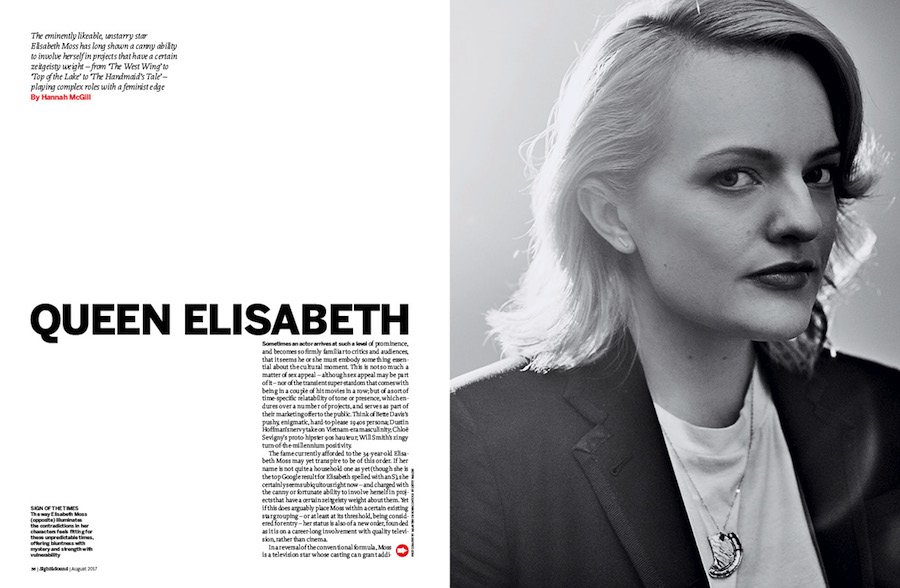 The eminently likeable, unstarry star Elisabeth Moss has long shown a canny ability to involve herself in projects that have a certain zeitgeisty weight – from The West Wing to Top of the Lake to The Handmaid’s Tale – playing complex roles with a feminist edge. By Hannah McGill. 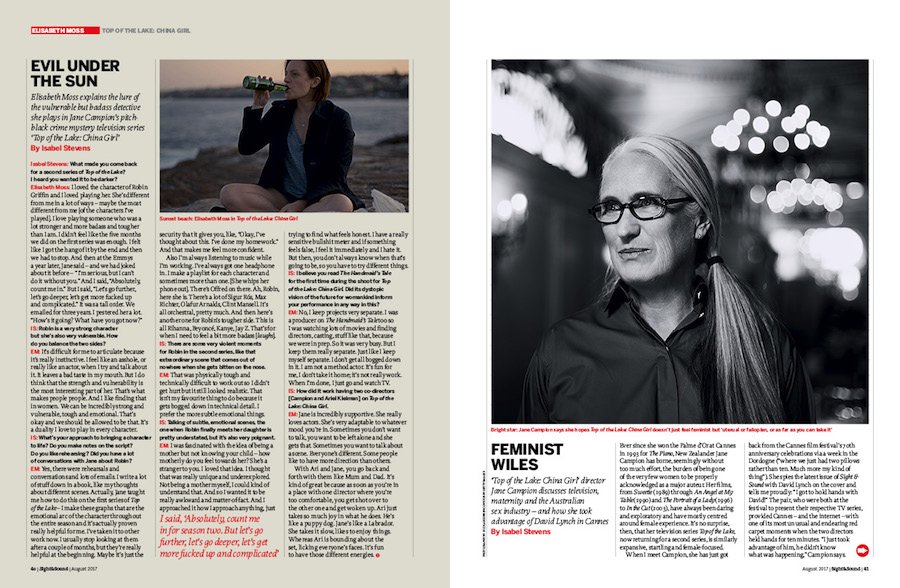 Evil under the sun

Elisabeth Moss explains the lure of the vulnerable but badass detective she plays in Jane Campion’s pitch-black crime mystery television series Top of the Lake: China Girl. By Isabel Stevens.

Top of the Lake: China Girl director Jane Campion discusses television, maternity and the Australian sex industry – and how she took advantage of David Lynch in Cannes. By Isabel Stevens. 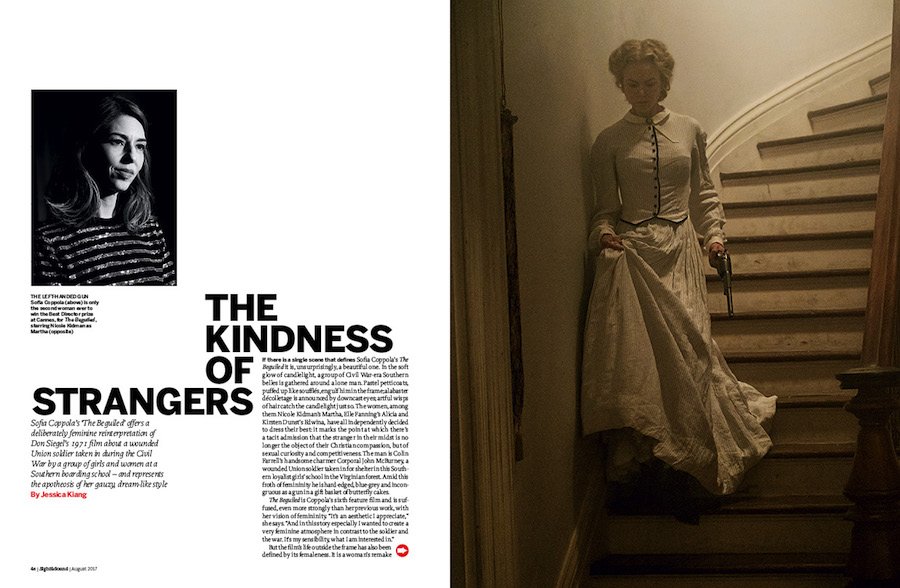 The Kindness of Strangers

Sofia Coppola’s The Beguiled offers a deliberately feminine reinterpretation of Don Siegel’s 1971 film about a wounded Union soldier taken in during the Civil War by a group of girls and women at a Southern boarding school – and represents the apotheosis of her gauzy, dream-like style. By Jessica Kiang. 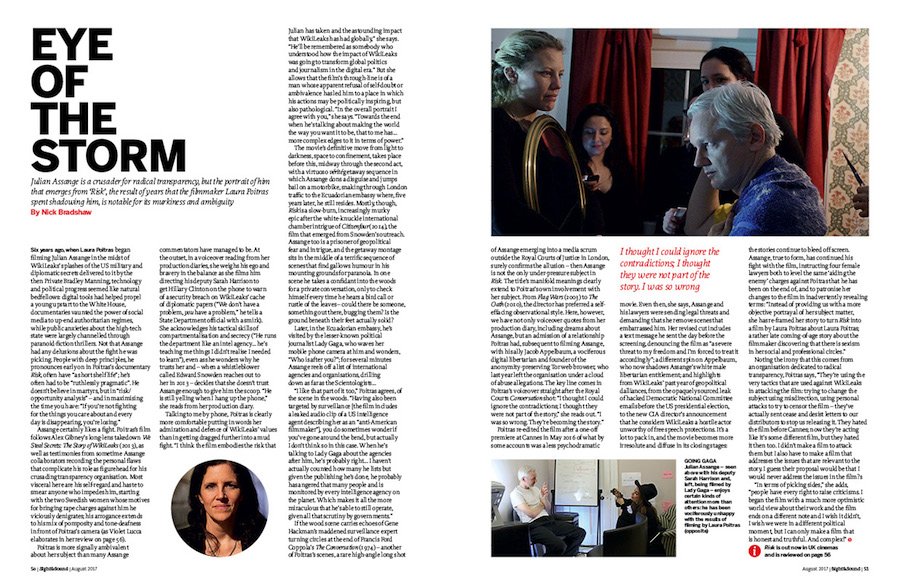 Eye of the Storm

Julian Assange is a crusader for radical transparency, but the version of him that emerges from Risk, the result of years that the filmmaker Laura Poitras spent shadowing him, is notable for its murkiness and ambiguity. By Nick Bradshaw. 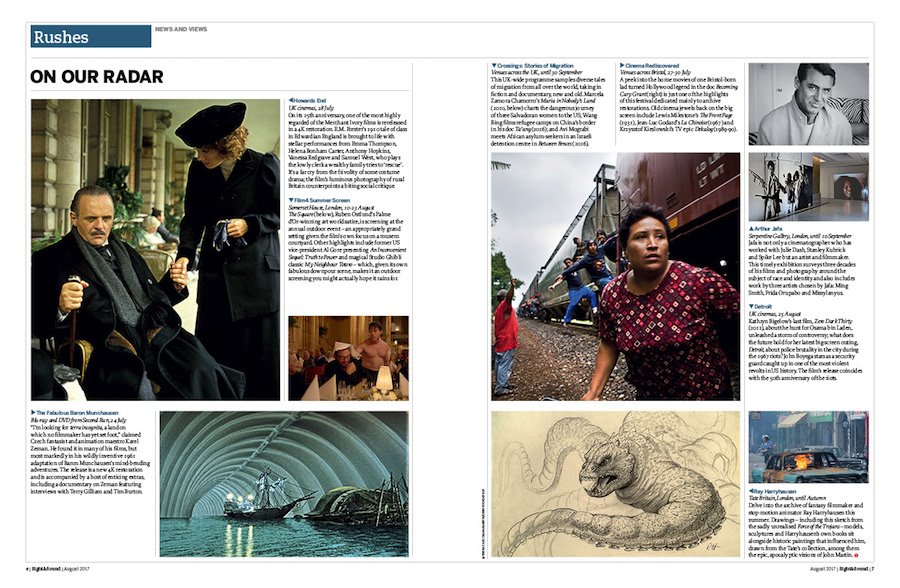 Preview: Young man with a horn

Kasper Collin’s I Called Him Morgan tells the gripping tale of a talented jazz trumpeter shot dead in a New York bar in 1972. By Andrew Male.

The Red Turtle and Studio Ghibli at the UK box office. By Charles Gant.

Interview: In sickness and in health

The Big Sick turns a traumatic episode in the lives of its writers, Kumail Nanjiani and Emily V. Gordon, into an unlikely romcom. By James Mottram.

Many of the great works of Nigeria’s Ola Balogun have been lost or forgotten – it’s time to reclaim his place in the canon. By Gary Vanisian.

Dispatches: The path to enlightenment

People often use the word ‘didactic’ to condemn a film, but the elegant use of instruction and information can enhance cinematic storytelling. By Mark Cousins. 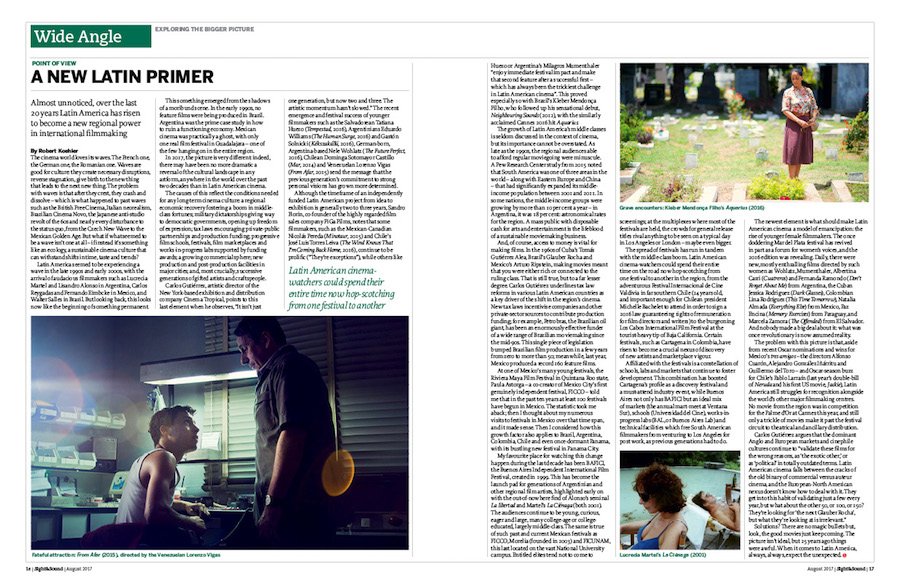 Almost unnoticed, over the last 20 years Latin America has risen to become a new regional power in international filmmaking. By Robert Koehler.

Jordan Wolfson’s animations unite the form’s humour and cruelty with the abundance and vacuity of web culture, to dizzying effect. By Esther Leslie.

It Comes at Night
Risk
Song to Song 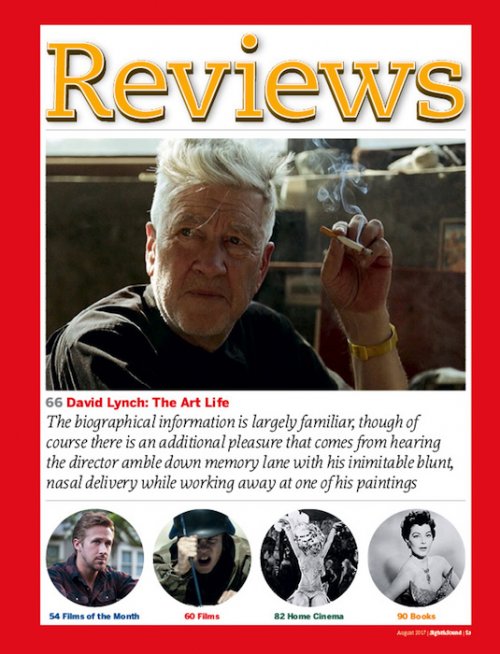 Abacus: Small Enough to Jail
All Eyez on Me
The Beguiled
The Big Sick
The Boy and the Beast
Captain Underpants: The First Epic Movie
Cars 3
A Change in the Weather
City of Ghosts
David Lynch: The Art Life
The Death of Louis XIV
Diary of a Wimpy Kid: The Long Haul
Dying Laughing
England Is Mine
Genocidal Organ
The Ghoul
Hounds of Love
I Called Him Morgan
Land of Mine
The Last Word
Maudie
The Midwife
The Mummy
Norman: The Moderate Rise and Tragic Fall of a New York Fixer
Pirates of the Caribbean: Salazar’s Revenge
Public House
Rock Dog
Scribe
Shot! The Psycho-spiritual Mantra of Rock
Souvenir
Transformers: The Last Knight
Wonder Woman 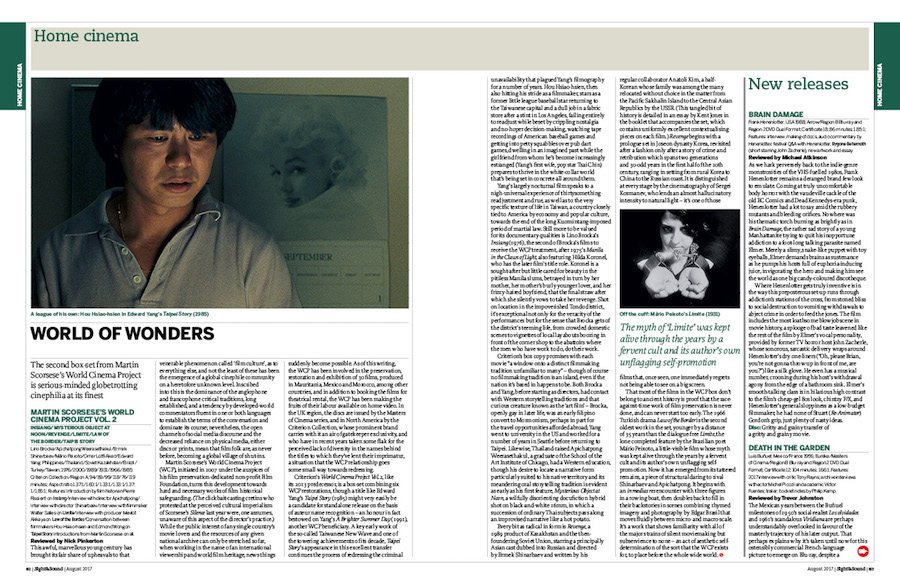 The second box-set from Martin Scorsese’s World Cinema Project is serious-minded globetrotting cinephilia at its finest. By Nick Pinkerton.

Lost and found: Life Upside Down

Alain Jessua’s first feature, a sensation at the time, is a finely observed portrait of madness – or maybe something else entirely. By Neil Sinyard. 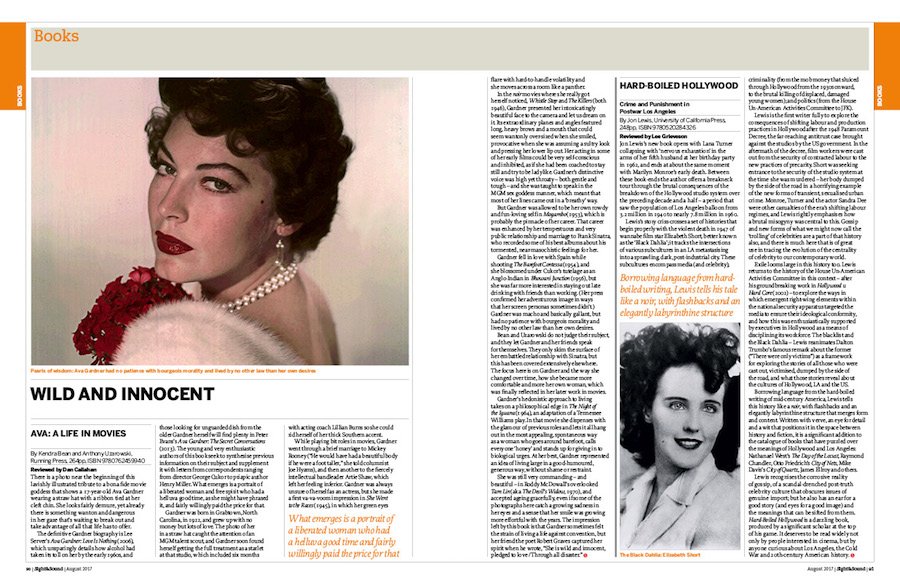 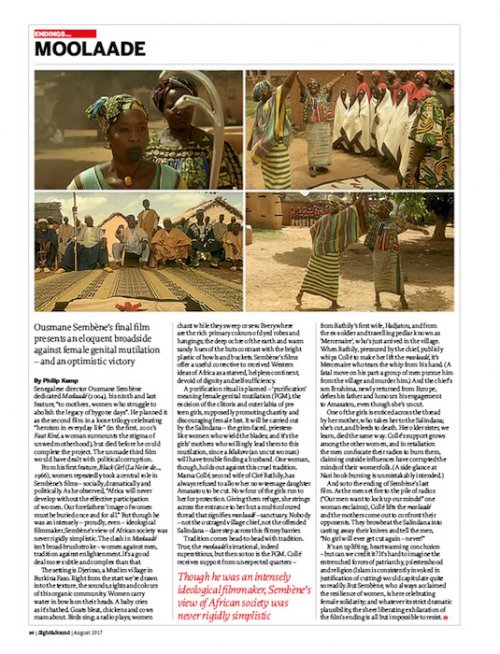