In print and digital from 3 May. 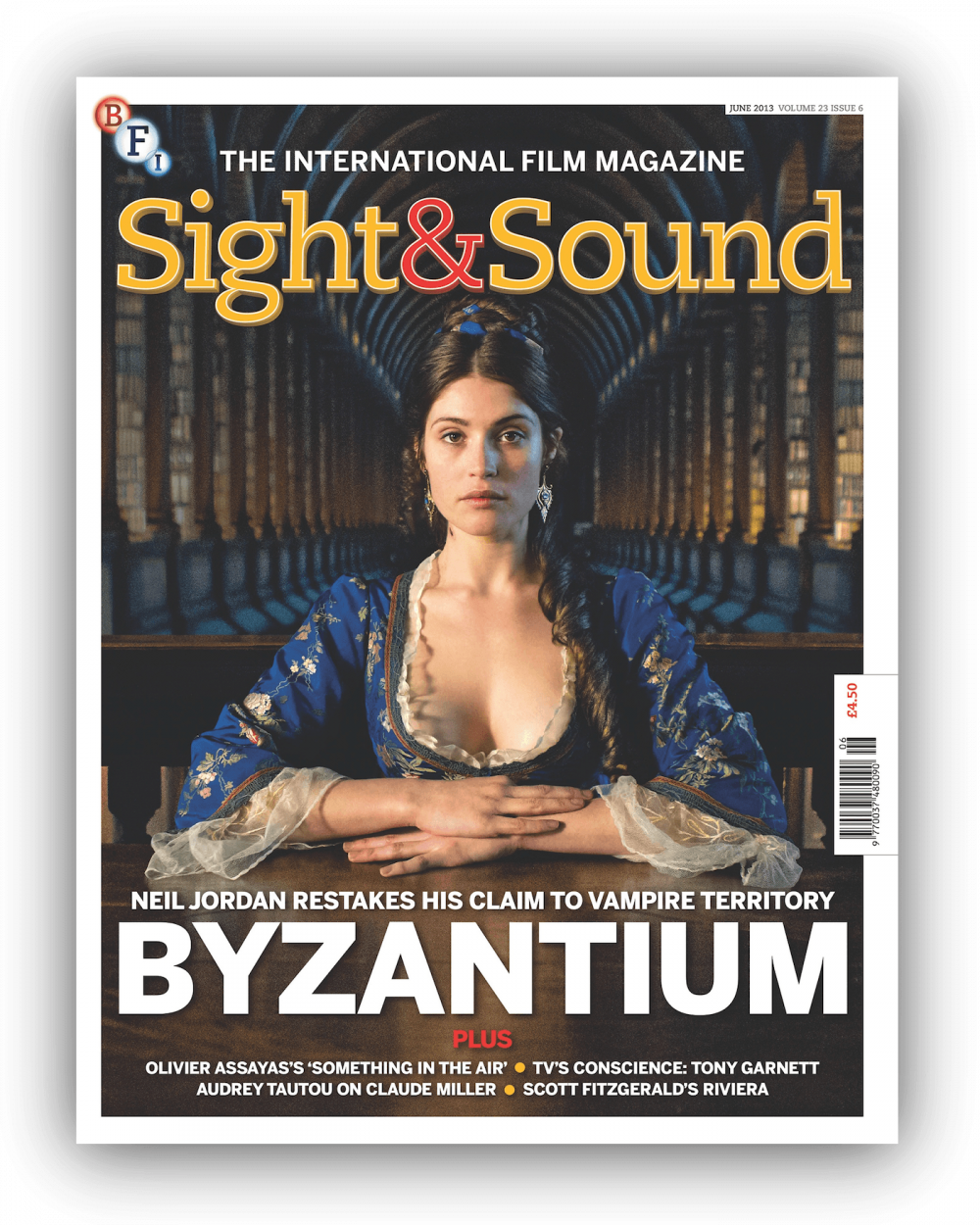 “A cool feminist fable” is how Neil Jordan describes his new film Byzantium, our June cover movie. Blood-suckers may now be a cinema staple, but Jordan’s seaside-town tale of a mother-and-daughter vampire duo on the run proves the genre has plenty of life in it yet. Trevor Johnston visits the director’s Irish home to reflect on his 34-year, 17-feature career – encompassing arthouse and mainstream cinema and television series – as well as discuss this new outing with the undead, 20 years on from Interview with a Vampire.

Meanwhile, to pay due respect to the first female vampire to land a Sight & Sound cover, Kim Newman traces the history of big-screen sirens who bite, from the silent era to Twilight.

In an issue filled with female protagonists, there’s a notable concentration of murderous mothers and wives. Nick James talks with Audrey Tautou about playing literary heroine and poisoner Thérèse Desqueyroux in an adaptation of François Mauriac’s classic directed by the late Claude Miller. Tautou reflects on working on the latter’s final film, while Nick Roddick looks back over his long and often overlooked career.

In Our Children, Belgian writer-director Joachim Lafosse fictionalises a real-life multiple infanticide case, though Thomas Dawson finds him less interested in sensationalism than in Greek tragedy, and in understanding how a mother could commit such a crime.

Another director familiar with imagining real events, Olivier Assayas keeps his focus on the 1970s after his recent terrorism epic Carlos, but turns his gaze inward for Something in the Air, a semi-autobiographical tale of radical youth. He discusses bringing the 1970s to the screen and the film’s roots in his own past with Kieron Corless.

This month’s Sight & Sound interview is with producer Tony Garnett, no stranger to politics or to upsetting the establishment (and now subject of a two-month retrospective at the BFI Southbank). Want to find out why former BBC Director General Mark Thompson lauds him as “simply the best television drama creator and producer there’s ever been”? Mark Duguid’s conversation with Garnett roves from his early days convincing his managers to let him shoot on location to his views on how the BBC should now adapt to the internet age.

But if it’s beautiful, glamorous worlds you want to get lost in, we can help there too. The 1920s roar loudly in this issue with our celebration of French director and aesthete-on-high Marcel L’Herbier (the focus of May’s Fashion in Film Festival at the BFI Southbank). Wallow in David Cairns’ visual tour behind the scenes which reveals the architects, artists and fashion designers who collaborated on these lavish spectacles.

Of course, no-one imagined and saw through the sparkle of the Jazz Age quite like F. Scott Fitzgerald, and to chime with the release of Baz Luhrmann’s Great Gatsby, Nick James explores the writer’s relationship with cinema, including the novels inspired by Fitzgerald’s time as a Hollywood screenwriter when his fame had ebbed in the 30s.

Meanwhile Pamela Hutchinson envisions – with only a surviving trailer and a handful of reviews to go on – what the first and now lost 1926 adaptation of Gatsby might have been like.

Elsewhere in the issue, other highlights include: our Cannes preview; a look inside William Friedkin’s memoir; a survey of artists’ moving image online; an interview with Lars von Trier’s long-standing producer, and obituaries of two recently departed Spanish filmmakers, Bigas Luna and Jess Franco.

Our comprehensive reviews pages analyse every theatrical release, and include in-depth appreciations of Something in the Air, Mira Nair’s The Reluctant Fundamentalist, Alexey Balabanov’s bleak portrait of the end of the Soviet Union The Stoker and British director Tom Shkolnik’s promising debut The Comedian.

Cover feature: Between the lines

After his successful sojourn in television with the The Borgias, Neil Jordan explains how he was drawn back to film by Byzantium, a contemporary vampire story that revisits some of the director’s characteristic themes and breathes new life into an overexposed genre. By Trevor Johnston.

Deadly is the female

Which side of paradise?

As Baz Luhrmann’s The Great Gatsby reaches our screens, it’s clear that the wistfully beautiful worlds captured in the novels of F. Scott Fitzgerald have lost none of their capacity to fascinate us. By Nick James.

The beautiful and the damned

Made in1926, the first film version of The Great Gatsby has sadly been lost, but contemporary reviews and a surviving trailer give a flavour of what it must have been like. By Pamela Hutchinson.

The Fashion in Film Festival has hit on an ideal subject in the work of French director Marcel L’Herbier, an aesthete whose films were at least as much about eye-catching design as they were about coherent drama. By David Cairns.

After his foray into international thriller territory with Carlos, Olivier Assayas’s new film Something in the Air returns to the autobiographical 1970s he first explored nearly 20 years ago in L’Eau froide. For the director, making the film proved a journey in itself, into a language and mindset he had almost forgotten. By Kieron Corless.

For all his interest in the events of 1968, Olivier Assayas belongs to a French tradition that moved beyond the overt political gestures of Godard. By David Thompson.

A man for all seasons

This month’s theatrical release of the late Claude Miller’s final film, Thérèse Desqueyroux, owes much to the pulling power of its star Audrey Tautou, but it should also inspire film lovers to explore the fascinating oeuvre of a master of the art of adaptation. By Nick Roddick.

Audrey Tautou talks about working with Claude Miller and the complex character she inhabited for his last film. Interview by Nick James.

Reuniting the two lead actors from A Prophet, Our Children is a fictionalisation of a real-life child-murder case that shocked Belgium. But instead of exploiting the tabloid potential of the story, writer-director Joachim Lafosse saw it in terms of Greek tragedy. By Thomas Dawson.

Think of anything thematically or stylistically groundbreaking in the last 50 years of British TV drama and the chances are Tony Garnett had a hand in it. From single television plays that outraged the establishment in the 1960s and 70s to era-defining series in the 1990s, the producer has brought to the screen an uncompromising body of work that’s now the subject of a BFI Southbank season. Interview by Mark Duguid.

Object Lesson: Hannah McGill on the significance of roses in the movies.

David Jenkins talks to director Tobias Lindholm about A Hijacking.

The Numbers: Charles Gant on the self-distributed Papadopoulos & Sons.

Kaya Genç on battles for the cinematic heritage of Istanbul.

The growth of opportunities to stream film and video online is offering a new generation of artists an alternative exhibition platform, writes Nathaniel Budzinski.

When Stéphane Delorme, editor-in-chief of Cahiers du cinéma, read our recent obituary of Oshima Nagisa, he was struck by Tony Rayns’s interpretation of the Japanese director’s rejection of auteur status. Here, he challenges that interpretation, while the obituary’s author responds in his own inimitable style.

The Comedian
The Reluctant Fundamentalist
Something in the Air
The Stoker

Benjamin Britten: Peace and Conflict
Beware of Mr. Baker
The Big Wedding
Byzantium
Come as You Are
The Company You Keep
Deadfall
Dead Man Down
Easy Money/Snabba cash
Everybody Has a Plan
G.I. Joe: Retaliation
A Haunted House
A Hijacking
The Host
Hummingbird
The Iceman
Iron Man 3
It’s Such a Beautiful Day
The Lords of Salem
Mud
No One Lives
Oblivion Olympus Has Fallen
Our Children
Populaire
Robosapien
Scary Movie V
The Stone Roses: Made of Stone
Thérèse Desqueyroux
Village at the End of the World

Angels – Series 1, Ghostwatch: Behind the Curtains, Perlasca: The Courage of a Just Man

Peter Tonguette dips in to a memoir by Rita Moreno

The second in Richard Linklater’s Before trilogy lets audiences write their own epilogue – a pleasure undimmed by this year’s follow-up. By Ryan Gilbey.