Film of the week: The Stoker 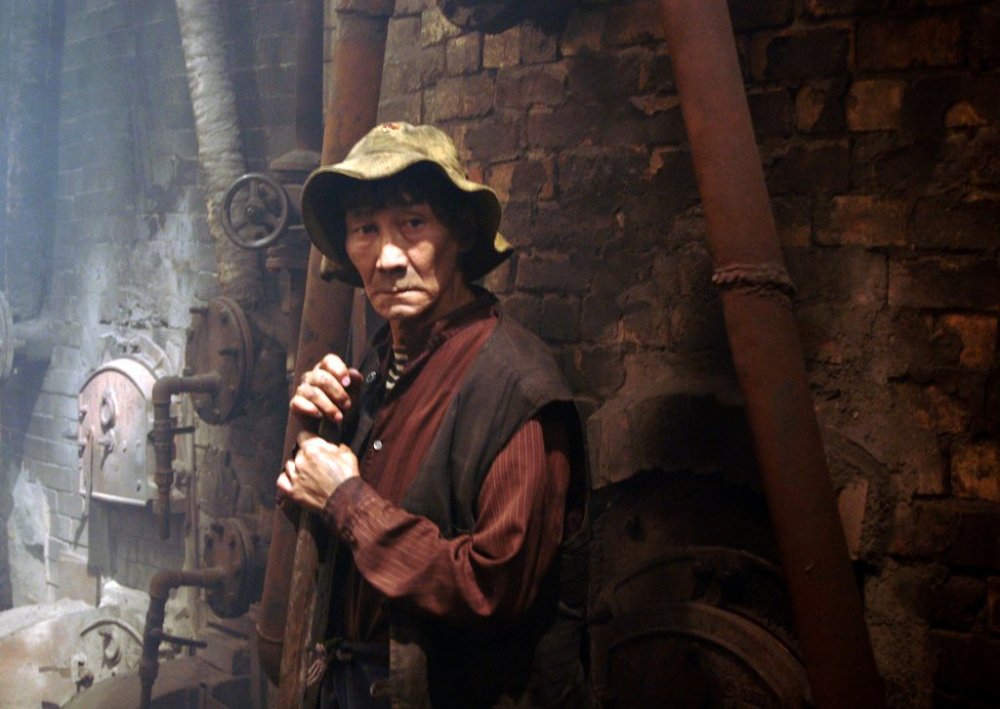 The first post-Soviet Russian director to gain international prominence, thanks to the contrasting yet complementary one-two punch of Brother (1997) and Of Freaks and Men (1998), Aleksey Balabanov has dropped off UK distributors’ radar over the past decade, with only Brother 2 (2000) and War (2002) playing outside festival screenings despite the director maintaining a consistent creative pace. So it’s greatly to the Edinburgh Filmhouse’s credit that they’re making their theatrical distribution debut with Balabanov’s penultimate film to date (he’s since made Me Too, which premiered in 2012), especially since it turns out to be one of his strongest and most characteristic works.

The Stoker isn’t the first film about a man who spends much of his time fuelling a gigantic industrial furnace – Bohumil Hrabal’s 1976 novella Too Loud a Solitude was adapted twice, as a Czech feature in 1996 and as an American puppet animation in 2007. But while Hrabal’s protagonist Hanta devotes his time to saving banned books from the flames and turning himself into a flesh-and-blood treasure house of human knowledge, Balabanov’s Skryabin is only too happy to turn a blind eye to precisely what’s being incinerated. Those familiar with Balabanov’s earlier work will be unsurprised to hear that this includes clearly fresh human corpses, with Skryabin’s former Afghan War colleague Misha glibly explaining that they’re criminals who couldn’t be touched by the law because they’d bribed the police, an excuse that rings distinctly hollow long before we find out the truth.

The film is set in the lawless 1990s, when Russia was being systematically carved up by oligarchs and the Mafia in the aftermath of the Soviet Union’s collapse – the ongoing financial crisis being demonstrated by the difficulty Skryabin has getting paid, and the fact that he then turns all his money over to his daughter Sasha, preferring to sleep on a dingy but rent-free bed in the boiler room itself. The only genuine loyalties on display are those between blood relations and old military colleagues, and the former ultimately trump the latter to devastating effect.

Business relationships, whether conducted by the dapper, respectably silver-haired Andrey Sergeevich or by the fur traders Sasha and Masha (the latter being Misha’s daughter), are both metaphorically and literally cutthroat, abruptly and often fatally curtailed on the slimmest of pretexts. “How do you know that she’s stealing?” asks Misha following an impassioned diatribe by Masha against Sasha. “I’m guessing,” she casually replies.

If The Stoker is never as relentlessly grim as Cargo 200 (2007), which infused a similarly bleak portrait of the fag end of the Soviet Union with the relentlessly clammy immediacy of a 1970s Tobe Hooper flick, it will come as little surprise to anyone even vaguely familiar with Balabanov’s oeuvre that the body count is substantial and that almost all the principal characters fail to survive to the end. In this respect, the film is squarely in line with the Brother diptych, War and the gangster film Dead Man’s Bluff (2005).

But The Stoker is also strongly redolent of Balabanov’s weirder, more wayward features. Skryabin, whose ethnic origin visibly marks him as an outsider regardless of his status as a former Hero of the Soviet Union (for bravery in Afghanistan), is close kin to the strangers in Happy Days (1992) and the Kafka adaptation The Castle (1994). Lengthy journeys through the ever present snow, on foot or by tram, recall Of Freaks and Men as well as the work of other fetishistic observers of facial and body language such as Alan Clarke, Béla Tarr or Balabanov’s compatriot Andrei Tarkovsky. This is at its most intense as the hitherto inscrutable Skryabin is forced to take the law into his own hands, his face betraying only the minutest flicker of what must be overwhelming emotion as he travels between the scene of the crime and the home of the perpetrators.

Balabanov’s films almost invariably feature highly distinctive soundtracks, sometimes performed and/or namechecked on screen. Danila, the protagonist of Brother, accidentally interrupts the shooting of a music video by the high-profile Russian rock band Nautilus Pompilius; Of Freaks and Men sets several hypnotically wordless boat and tram rides to Mussorgsky; and Cargo 200 uses popular Soviet-era songs as an implicitly ironic commentary on the film’s onscreen horrors. The Stoker goes even further, underscoring virtually the entire film (including important dialogue scenes) with a series of jaunty, finger-snappingly catchy folk and flamenco-tinged pop songs and instrumental numbers (many by fusion guitarist DiDuLia, mentioned during an early conversation between Sasha and Masha) so wildly at odds with the relentlessly dog-eat-dog vengeance driving the narrative that the experience becomes unnervingly intoxicating. 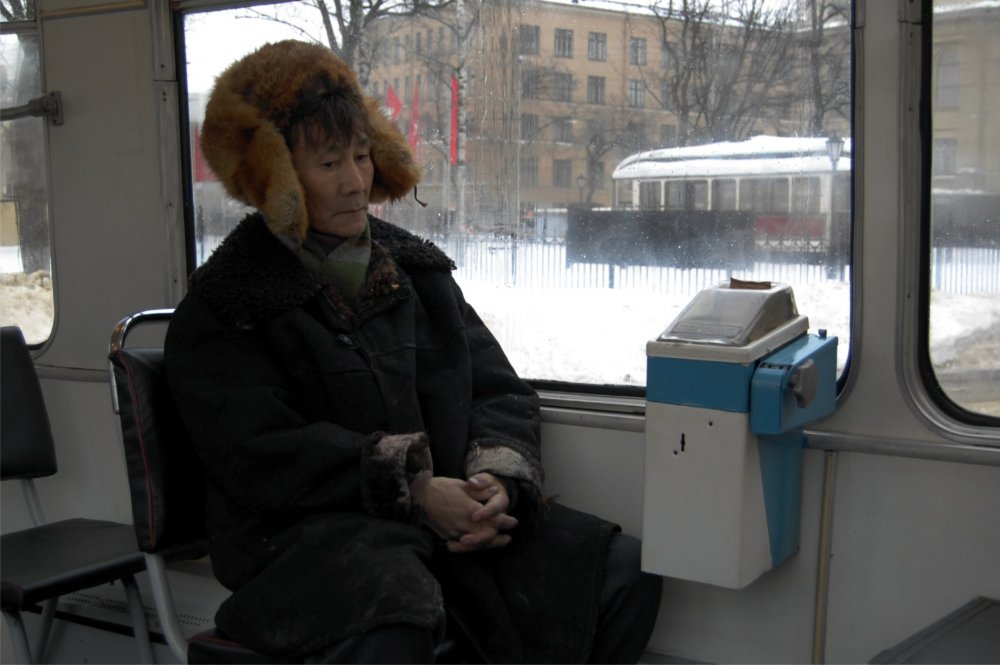 But the most distinctive counterpoint in the film is that between Skryabin’s mundane daily existence and his imaginative inner life, deriving from his ethnic origin as a Yakut (a Turkic people based in north-eastern Siberia). In between boiler-stoking, he spends his time seated at an old manual typewriter, painstakingly pecking out a tale of rape and humiliation inflicted by a Russian exile on a Yakut couple during the Tsarist era, a time when the Yakuts had no legal rights and were powerless to prevent exploitation by Russian ex-convicts forcibly resettled alongside them.

Actually, as Sasha points out, he’s rewriting ‘Khailak’, an existing folktale (possibly word for word in the manner of Borges’s Pierre Menard) originally published in 1893 by the Polish writer and ethnographer Wacław Sieroszewski, who was himself exiled to the Yakut region for attempting to promote socialist ideas. Skryabin reads from the manuscript at several points, often to Vera, a wide-eyed little girl who pays him regular visits. Although he never personally draws attention to this, it seems likely that Skryabin sees himself and Sasha (who converse in Yakut when alone together) as a latterday equivalent of Khabdzhii and Kermes, the couple in the story, who end up at the bottom of an institutionalised pecking order through no fault of their own.

At the very end of the film, ‘Khailak’ is dramatised via a setting and mise en scène strongly reminiscent of one of Balabanov’s least-seen but most striking films, The River (2002), which was left deliberately truncated at less than an hour following the mid-production death of its leading actress. Also set in 19th-century Yakutia, adapted from Sieroszewski’s work and co-starring the late Mikhail Skryabin (who plays his namesake in The Stoker), it’s a rare example of a Russian feature that’s thoroughly immersed in the world of one of the country’s largely ignored (but half-a-million-strong) ethnic minorities.

The Stoker’s adaptation of ‘Khailak’ is also abruptly cut short, this time thanks to Skryabin’s unfinished manuscript coming to a tantalisingly ambiguous end: Kermes, recently raped by her Russian guest, is being beaten by her husband Khabdzhii, but the final line suggests that she may actually welcome this, due to latent masochism or a belief that she somehow deserves her fate or very possibly both. The fact that this already decidedly unsettling material is being narrated by Vera – who seemed drawn to both Skryabin and his story because he appeared to have a firm grasp of notions of good and evil in a world where they’ve rapidly become alarmingly blurred – strikes another disturbingly discordant note at the end of a film that is ultimately much more resonant than the gleefully amoral tone of individual set pieces might initially suggest.

Related to Film of the week: The Stoker