Sanity is not enough: Jack Ryan versus the world’s hotheads

Since his post-Cold War debut as Alec Baldwin’s crisis-averting analyst in The Hunt for Red October, Tom Clancy’s CIA cool hand has found himself handed off from one square-jawed Hollywood lead to the next. In a world of rising geopolitical temperatures and on-screen bombast, might his admirable rationality be misplaced? 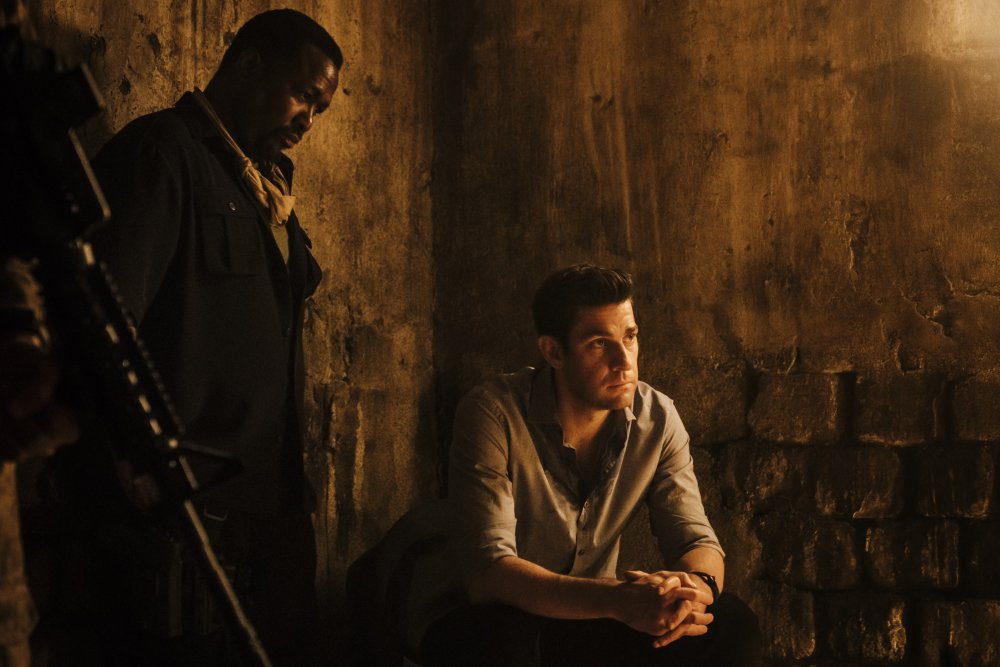 “The Sept.11 attacks on the World Trade Center and the Pentagon hit the United States in a vulnerable spot – right in the fantasies.”

In voting to reshape the world, the Soviet Communist Party vexed Paramount Pictures while it was on a roll. In February 1990 the party’s Central Committee agreed to give up its monopoly on power and signal the decline of the Soviet Union, immediately devaluing the cultural currency of every Russian-accented, Communism-inclined, state-sanctioned Soviet villain on the Hollywood release schedule.

Paramount took the path of least resistance: the smallest of tweaks to the opening credits of The Hunt for Red October before its release the following month shunted the film’s action back a safe distance to 1984, allowing the silent Russian submarine of the title to loom out of historic Cold War paranoia and fear of Communist potency, rather than the fog of confusion that characterised the actual moment, not to mention the growing feeling that real-world Soviet nuclear technology might be held together with string.

But Cold War paranoia isn’t really Red October’s thing. In turning Tom Clancy’s dialogue-driven novel into a screenplay, writers Larry Ferguson and Donald Stewart morph the story from a battle of state ideologies into the least macho of techno-thrillers, composed almost entirely of cerebral characters thinking their way out of a crisis. It finds director John McTiernan – who in 2016 told Premiere magazine that “The cult of American hyper-masculinity is one of the worst things to have happened to the world during the last 50 years” – tacitly aligning with academic Carol Cohn’s research into the men working around phallic nuclear subs and equally phallic nuclear missiles, a trade awash in double entendres about vertical erector launchers and fears that “the Russians are harder than we are.” 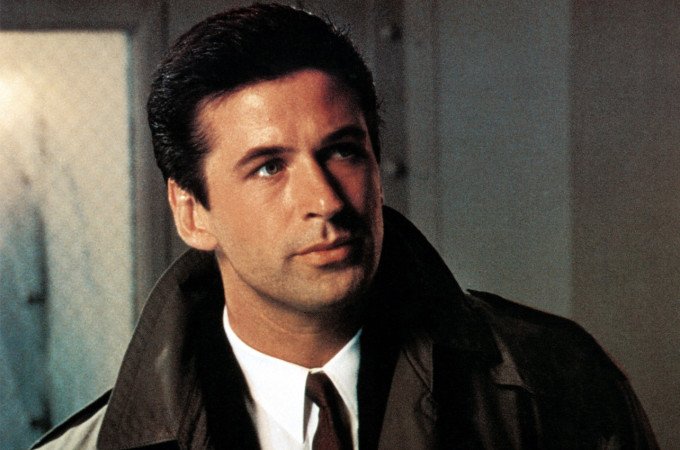 Into this environment comes Jack Ryan, Clancy’s reluctant warrior-historian, as played in the first of his live-action outings by Alec Baldwin. Notwithstanding Beetlejuice two years previously, Baldwin’s early career involved a full cadre of cads, bastards and sex pests, and the film feints that its undemonstrative CIA protagonist might not be cut out for crises in either the Red October or the White House. In fact, Ryan’s lack of grandstanding proved that level-headed analysis could be the kind of espionage late-period Cold Warriors needed, and that book-smarts might save the day. And clearly the Soviet Union is doomed anyway: whatever year the film opts to be set in, Sean Connery’s Marko Ramius or other pacifists like him have eroded its foundations, so Ryan seems like the coming man, a hero who might not need to break into a run.

The changing obligations of Hollywood heroics have required Jack Ryan to run ever since. For Patriot Games (1992) and Clear and Present Danger (1994) he was played by Harrison Ford, a full 19 years older than Baldwin, in two films by Phillip Noyce that emphasised the family unit under threat. Patriot Games is a blunt and moderately cack-handed Hollywood wade into Irish affairs, as an IRA renegade played by Sean Bean targets Ryan’s wife and daughter. Ryan retaliates in equally blunt cinematic fashion, via a punch-up on a boat that’s on fire in a storm, his patriarchal rights reasserted. 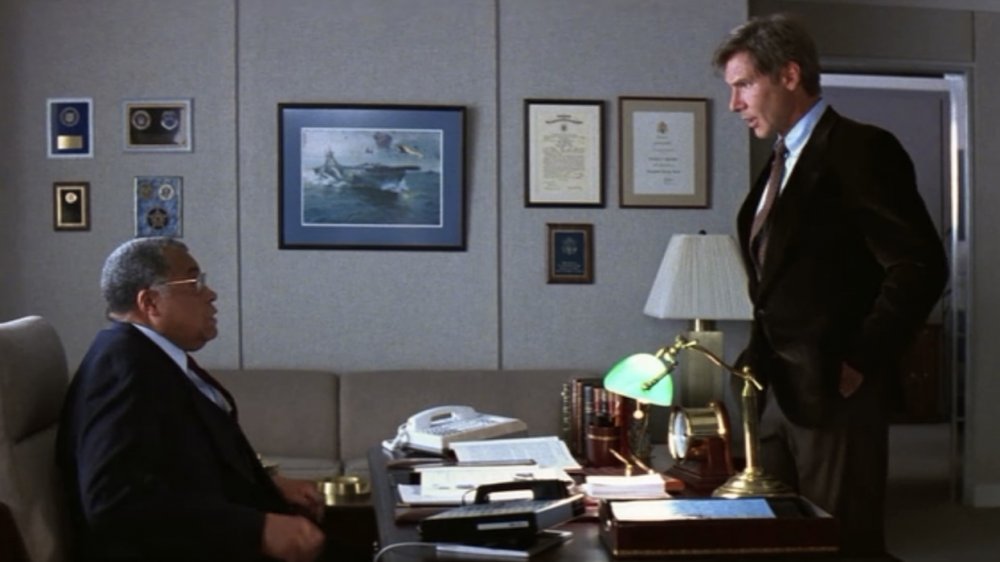 Clear and Present Danger breaks the Ryan family unit too, but the family in question is the CIA brotherhood of spooks, fractured by the chronic frustrations of prosecuting the fruitless War on Drugs. Ryan is left beached as the lone man of honour, until he meets Clark (Willem Dafoe), a field operative who has had his ideals and his comrades betrayed by the same feeble leaders.

Clear and Present Danger is much the better film with the chewier thesis, one currently timely all over again: that the intelligence community should undermine its own government when that government loses its mind. It ends with the CIA man sternly telling off the US President in person in the Oval Office. But Tom Cruise and Mission: Impossible were on the horizon, bringing the new acrobatic, green-screen-enhanced and largely sillier school of heroism, one which had less time for telling off the powers that be. Jack Ryan retreated from the cinema for eight years. 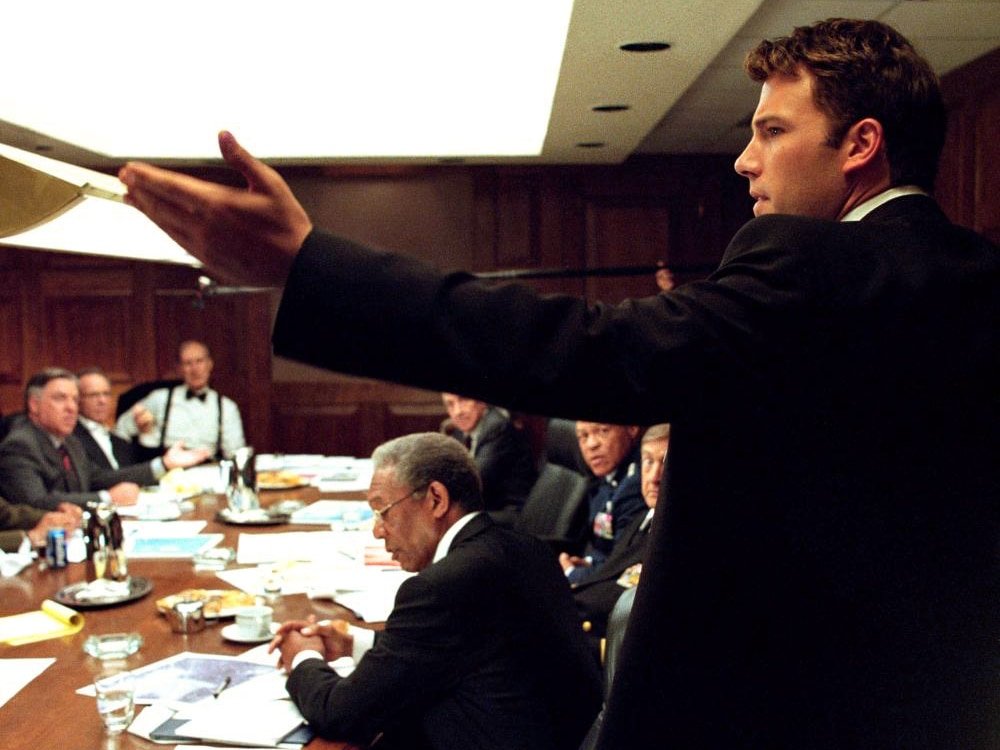 He re-emerged under a mushroom cloud and rejuvenated into Ben Affleck in The Sum of All Fears, a film in production during 2001 and released the following summer amidst the cycle of morbid 2002 action films that J. Hoberman called “a springtime for carnage”. In Sum, unlike most nuclear thrillers, the bomb actually goes off, so Ryan becomes the model 9/11 hero, running into irradiated Baltimore while everyone else is running out. Meanwhile America’s enemies align like a super-villain team-up: nuclear relics of Arab-Israeli conflict are found by Syrians, traded to South Africans, and acquired by a European neo-Nazi, who conscripts Ukrainian scientists to his cause.

Prescient in both its theme of fascism breaking cover and a sense of governmental chaos, of careering political failure, the film finds another good Russian to pin its hopes on, in the form of Ciarán Hinds as President Alexander Nemerov. Wearing the black turtleneck of the intellectual, Nemerov looks like a virile new world order compared to US President Fowler (James Cromwell) and his cabinet of similar greybeards, all shouting at once. With 9/11 dust still falling in the real New York, the film’s intelligence communities are either muddled or useless, until Ryan claims a more optimistic, even nuclear-free future for the planet’s children. The vigorous Russian president, rather than the American dinosaur, quotes JFK to the world in reassurance. 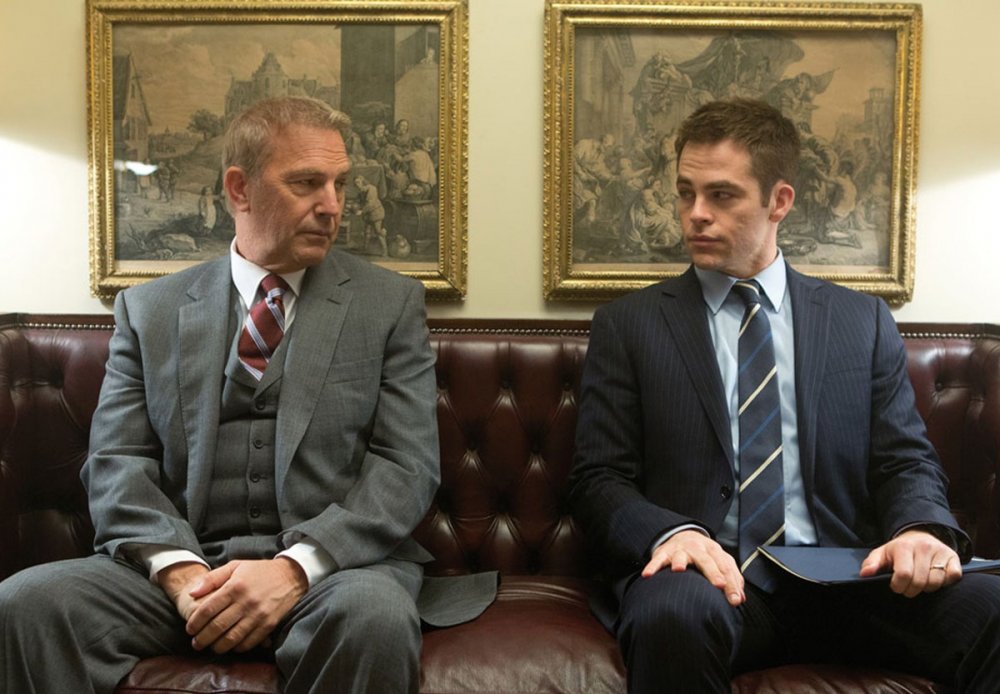 The ideal was fragile even at the time. A peaceful world failed to rise up out of America’s Iraq intervention, and Ryan went into cinematic abeyance again in favour of hyperbolic superheroes and proxy-villains, until Jack Ryan: Shadow Recruit in 2014.

Kenneth Branagh’s thriller is all shallows and no deep end, as à la mode as the craftspeople involved could make it, and Ryan himself has shifted from 9/11 hero to post-9/11 hero, motivated into military service as a young man by the World Trade Center attacks themselves. Without even Ben Affleck’s moderate world-weariness, Chris Pine plays Ryan as an eager beaver, dispatched to Moscow to learn how to lie and tackle a new evil spirit haunting geopolitics: a dying Russian oligarch aiming to take out the US financial system with him.

The whole enterprise is as weightless as air, Branagh apparently emerging from his stint making Thor in the Marvel Studios salt mines with a healthy lack of interest in the masochistic suffering that most American heroes want to endure. Meanwhile the pendulum has swung back in favour of the intelligence community again, and the CIA has got its act together once more. 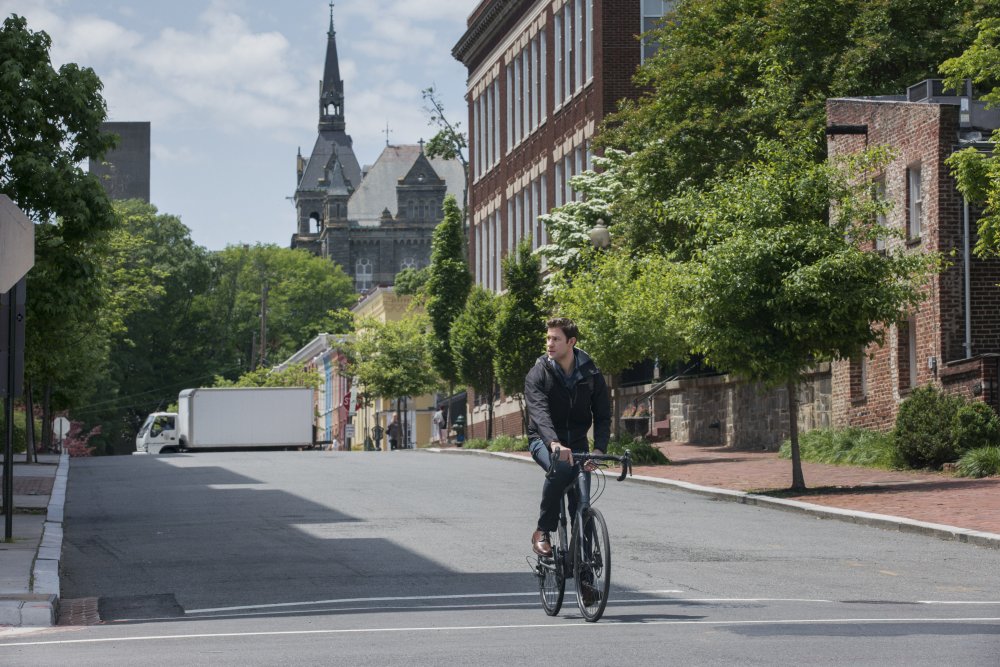 Today Jack Ryan runs again, on VOD courtesy of Amazon Studios in the series fully named Tom Clancy’s Jack Ryan, where the title character jostles for elbow room in his own show. Physically John Krasinski seems the least athletic and most Everyman version of the character yet, although this Ryan carries a vague self-satisfaction that works against Clancy’s vision of Ryan as a good man in a storm.

Stoically bearing his battle scars while crunching financial spreadsheets, Ryan uncovers the financial fingerprints of Mousa Bin Suleiman (Ali Suliman), a terrorist embittered as a child by a 1983 bombing raid on his Beqaa Valley home and now plotting an atrocity on US soil. The story finds something for Dr Cathy Mueller (Abbie Cornish) to do, by the cheat of making her an epidemiologist specialising in ebola which might come in handy later; but Jack and the future Mrs. Ryan are passive creations compared to some of the others. Suleiman, seen in flashback as a financial analyst rebuffed by middle-aged Parisian bankers, and his wife Hanin (Dina Shihabi), whose efforts to escape her husband are an odyssey through legal and illegal refugee escape routes, are far more active.

Meanwhile two American characters are darkly shaded enough to suggest actual character drama rather than ballistic adventure. One is Ryan’s boss James Greer (Wendell Pierce), now carrying a backstory in which he converted to Islam for marriage but is now in a torrid divorce. The other is a US drone pilot struggling not to come apart at the seams after a career murdering people from a mile away – played by John Magaro in a brief sub-plot that gestures towards the irrational agonies of industrial killing. 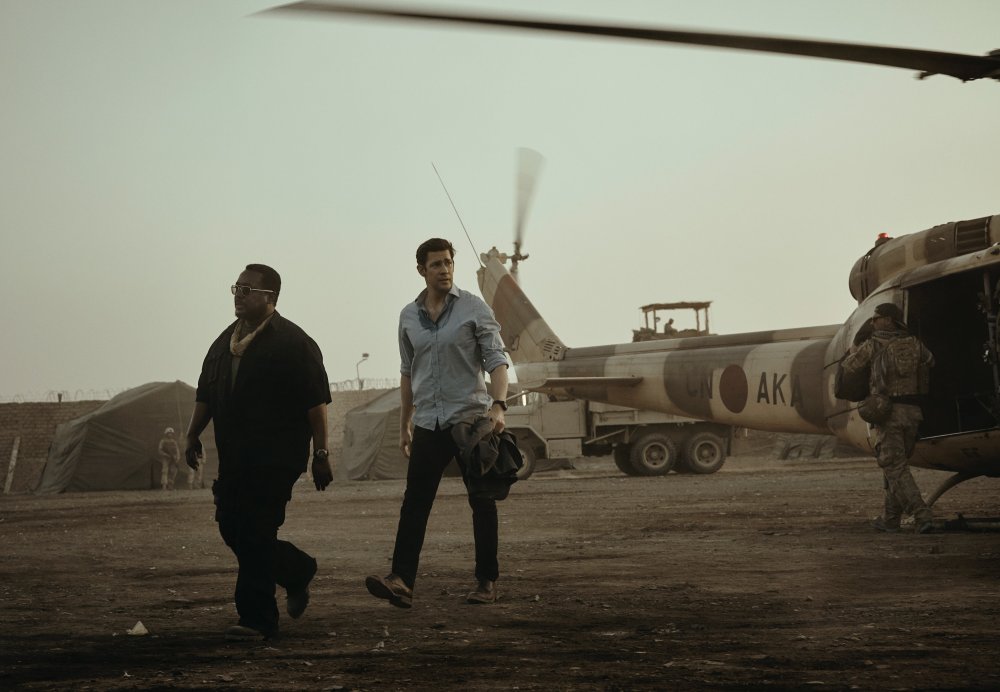 Depiction of a thing is not examination of a thing, though. Two decades after pay TV networks, led by HBO, set the cultural controls for the heart of male darkness, the template of flawed, conflicted, harassed males has become so embedded that it’s worth asking how far into those irrational agonies it can actually now dig. Compared to the hysterical wish-fulfilment of 24, this new Jack Ryan series is the hangover after the binge, morbidly certain that history is doomed to repeat endlessly whether or not foreign bones are broken and rendition made extraordinary. Most of its characters are clad in a host of familiar signifiers, too many to match the despair of the topic, and the writing of Ryan himself is as prosaic as it gets.

If art has a role in understanding 21st century terrorism as a step towards making it extinct – and we had all better hope that it does – those understandings might not come from the organised sanity of TV procedurals and their faith in cause and effect, but from something that recognises the mental hysteria involved in killing one thousand people you don’t know, or the equal psychic bedlam of quenching that impulse at source. Season three of David Lynch’s Twin Peaks remains unmatched in its grasp of this madness and the irrationality of masculine violence, which is why that show is a legitimate heir to 20 years of less surreal television series digging into difficult men. Tom Clancy’s Jack Ryan is too earthbound to investigate its own topic to any similar extent, and possibly not that interested in doing so either. It’s as comfortable as The Hunt for Red October was with the theory that an analyst with a bad back catching a lucky break is a workable anti-terrorism solution, but that sounds a lot less convincing now than it did then.

Related to Sanity is not enough: Jack Ryan versus the world’s hotheads