Let us remember the origin story of Bryan Singer, the greatest of the modern superhero directors, for whom self-knowledge is the ultimate quest and question. 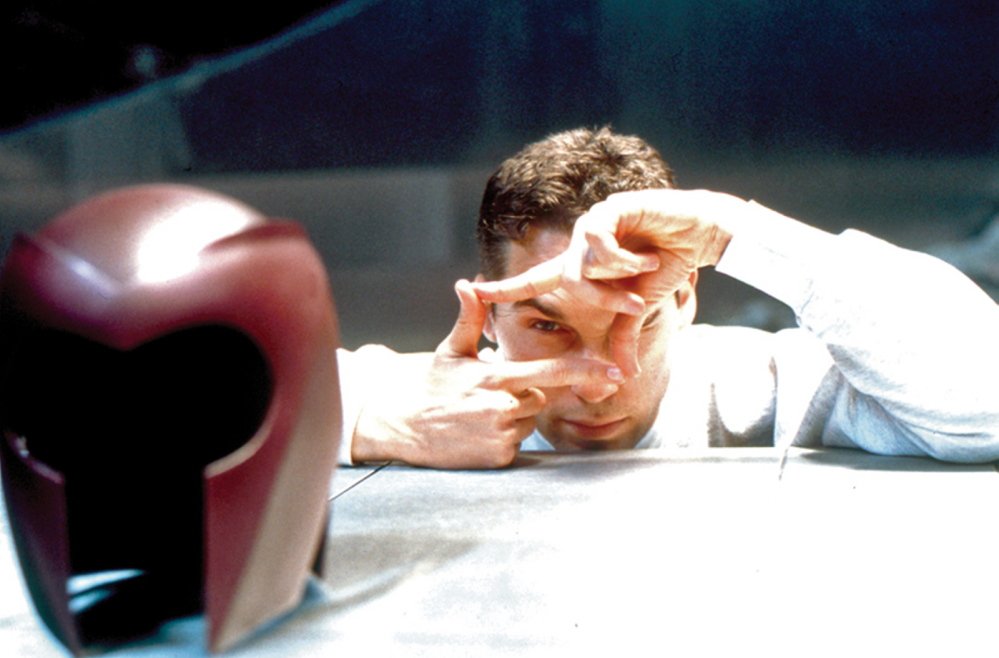 Amnesia, it turned out when I began to pay attention, is a modern mood, and a very American one.

Cinema’s reigning heavyweight amnesiac always remembers, forgets, and has to be reminded all over again. Grappling with his own cortex like a drunkard trying to wire a plug, he peers in and finds just the muddy footprints of telepaths and scientists, friends and foes, who all got there before him. A walking case study from the notebooks of John Locke, the mutant with the claws ponders whether lack of memory means lack of identity, en route to another mournful punch-up.

Wolverine, portrayed briefly or at length by Hugh Jackman across no fewer than seven films with an eighth imminent and a ninth on the horizon, falls outside Jonathan Lethem’s diagnosis of amnesia as an American disposition – born too far north – but he is squarely in the thematic cross-hairs of the X-Men’s cinema figurehead Bryan Singer, who has regularly returned to scratching Locke’s itch of memory, history and identity with some zeal. Tough now to remember the improbable concept of an indie director – is this case one known for The Usual Suspects (1995) and its extended mind game – being tempted to take on X-Men (2000) for a major studio; tough also to recall the surprise when the result hit the jackpot (“stupefying” box office, per Variety the following week). Not so hard to spot an intellectually inclined and classically minded filmmaker clinging tenaciously to his footing ever since, while the tide runs in the opposite direction.

Years of spoilerage and a cottage industry of analysis have dented the ability of Keyser Söze to dupe an audience, but as scripted by Christopher McQuarrie The Usual Suspects relies as much on the queasy appeal of an unmoored past being constantly made and remade as it does on the identity of some hyperbolically sinister Turk.

The same subtext breaks cover completely in Apt Pupil (1997), Singer’s next film and the one which firmly connected him with both actor Ian McKellen and the topic of Nazi Germany, in which a former SS Sturmbannführer hides out in California by inventing a past free of slaughter, torture and Zyklon B. A 16-year-old neighbour (Brad Renfro) realises the truth and starts blackmailing the monster next door into describing what genocide feels like, with suitably dire results. Less unsettling than Stephen King’s source story – McKellen’s war criminal fails to cook a pet in an oven, while the book’s version is much more successful at such things – the film still catches a whiff of madness when the teenager forces the pensioner to dress in full Nazi regalia and do a creaky goose-step across the living room, two maniacs locked in combat.

Nazi Germany is the past there’s no remaking and the lost time there’s no getting back, and it takes its place at the centre of things in Singer’s X-verse as soon as the first film’s opening shot of a concentration camp fades in. But viewed through the lens of modern superhero extravagance, X-Men is practically a haiku. Singer’s working relationship with cinematographer Newton Thomas Sigel has produced glories, but this film is shot anamorphically in ways that show restraint, if not incompletion. Supplements on a later DVD catch the moment Singer and Sigel learn that they have lost a full six months of post-production time, and the air temperature drops. The film ticks along anyway, thanks to Singer’s knack for group dynamics and the strong triangle he draws between three particular troubles: Magneto’s Nazi-scarred past, Rogue’s self-inflicted dismal future and Wolverine’s uncertainty about either.

It turned out to be a trial run. X2 (2003) is not just better, but has yet to be dethroned as modern superhero cinema’s high-water mark, and with the genre currently a howling bag of cats, its perch seems secure. Running in high thematic gear, it has Wolverine faced with exactly what kind of character he used to be, something all men might dread, while the Malcolm X/Martin Luther King dynamic between Magneto (McKellen) and Charles Xavier (Patrick Stewart) gets a more complete run out.

A lot of its success is down to higher craft – X2 reunited Singer with composer, editor and general ally John Ottman, and the Singer/Sigel/Ottman axis feels rock solid – but X2 is both deadly serious and supremely playful, in ways that a calm stylist like Singer is much more likely to pull off than TV-inclined directors such as Joss Whedon or a prog-rock humanist like Christopher Nolan. 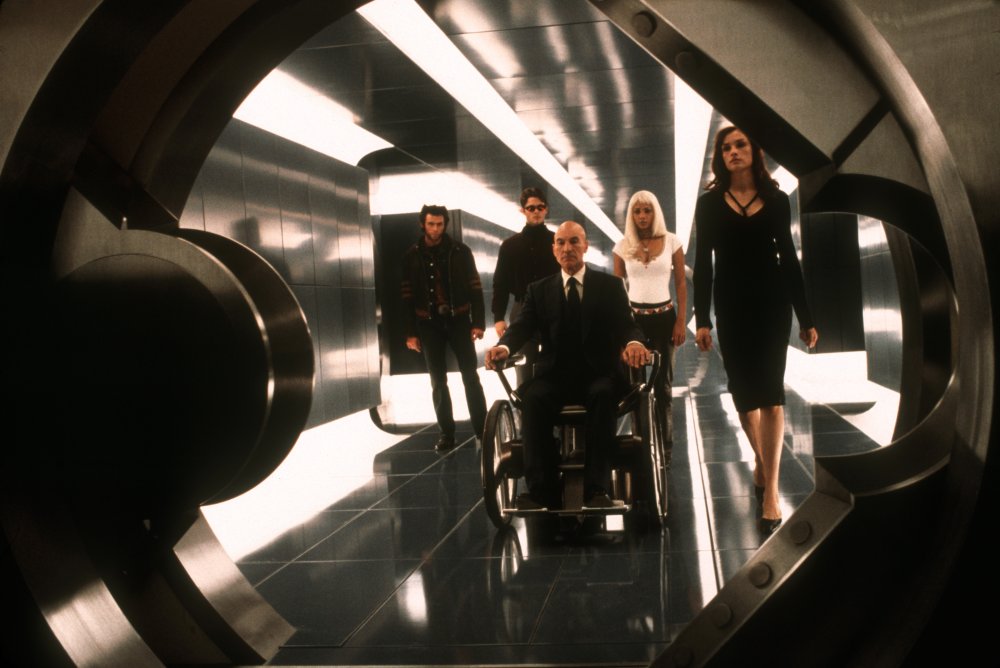 At one point shape-shifter Mystique, convincingly disguised as actor Rebecca Romijn, wears a Mystique-skin little blue dress, which is on its own a drier witticism than anything yet to emerge from the mouth of Tony Stark, while Magneto later exsanguinates one of his prison guards and then gives the corpse a catty side-eye. (He exchanges a whole raft of sexually freighted looks with Mystique, and the script is happy to hint that the two of them are the kinkiest swingers in town.) But in the same film, mad Colonel Stryker (Brian Cox) wheels his mute mutant son around in a wheelchair, concocting bitter destruction for Xavier and innocent thousands while really committing basic filicide – a particularly complete way to obliterate your own past.

Everywhere you look in X2 a fully formed little mini-drama like Stryker’s appears and runs its course, because everywhere you look the subject is self-knowledge, for better or worse: Iceman (Shawn Ashmore) comes out to his parents, Pyro (Aaron Stanford) has clearly burnt his parents to the ground, Jean Grey (Famke Janssen) struggles with incipient godhood. There’s a young mutant kid with a forked tongue who feels more solidly delineated than Marvel’s current Thor, and he doesn’t even say anything. 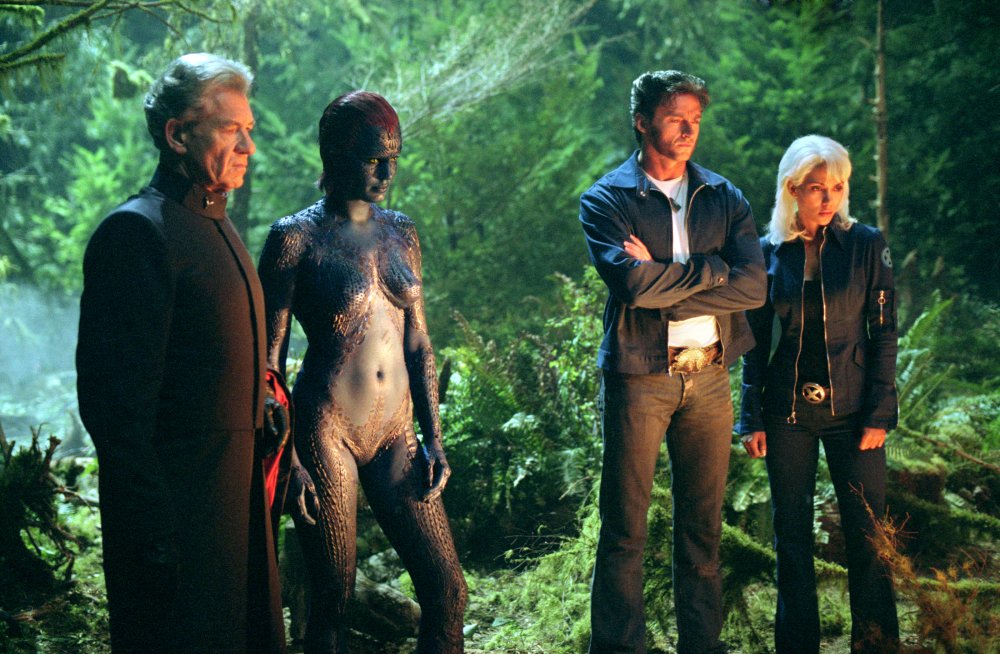 High-points require declines, and the next X-film was Brett Ratner’s X-Men: The Last Stand (2006), in which Magneto broadcasts from one of Osama bin Laden’s old caves and Vinnie Jones wears the bucket helmet of Juggernaut. Singer had gone by then, unexpectedly jumping ship to hunt the biggest superhero trophy of all: Superman Returns (2006), a film about which the deserved book has yet to be written.

Few films look as different a decade after their birth as Superman Returns does now, but then few find their territory so seismically altered. For one thing it’s the handsomest superhero film so far, not just classicist but actually classical. Singer’s resources were clearly immense, a production budget north of $200 million yielding a wealth of deep-focus detail and subtle characterisation. The Daily Planet newsroom is bronze art deco delirium, with Hugh Ferriss prints on the wall; a set-piece with a space shuttle is an avalanche of accumulating disasters. 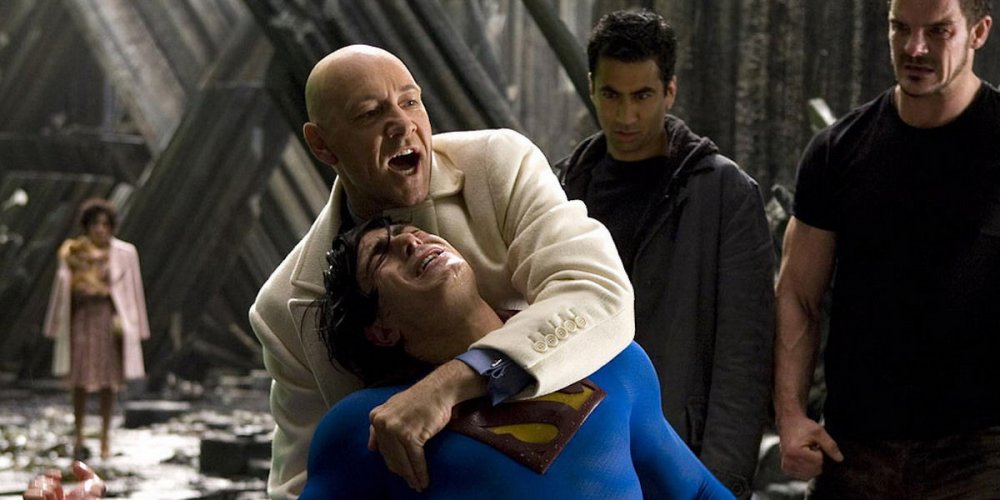 But the indigestible issue – then anyway – was the premise, yoking the film directly to Richard Donner’s 1978 film while casting Brandon Routh and Kate Bosworth as a Clark and Lois who were impossible to square with the templates. On top of which Singer seized on his own points of interest, pushing questions of lost time and rootlessness to their ultimate familial end point: Superman gets a young son he didn’t know he had, weighing him down with the knowledge that poor orphaned Kal-El had contrived to leave his own son without a father, a problem the boy’s mother had sorted out for herself.

For such sins of ambition was the film jeered while raking in cash, but today – to steal a remark from critic Jett Loe – it stands next to Zack Snyder’s Superman films and looks like Billy Wilder. Either these characters taken from panel art can support multiple flesh-and-blood approaches, or they can’t. The curse of the current superhero film arms race is the pressure on filmmakers to pick the wrong answer to that. 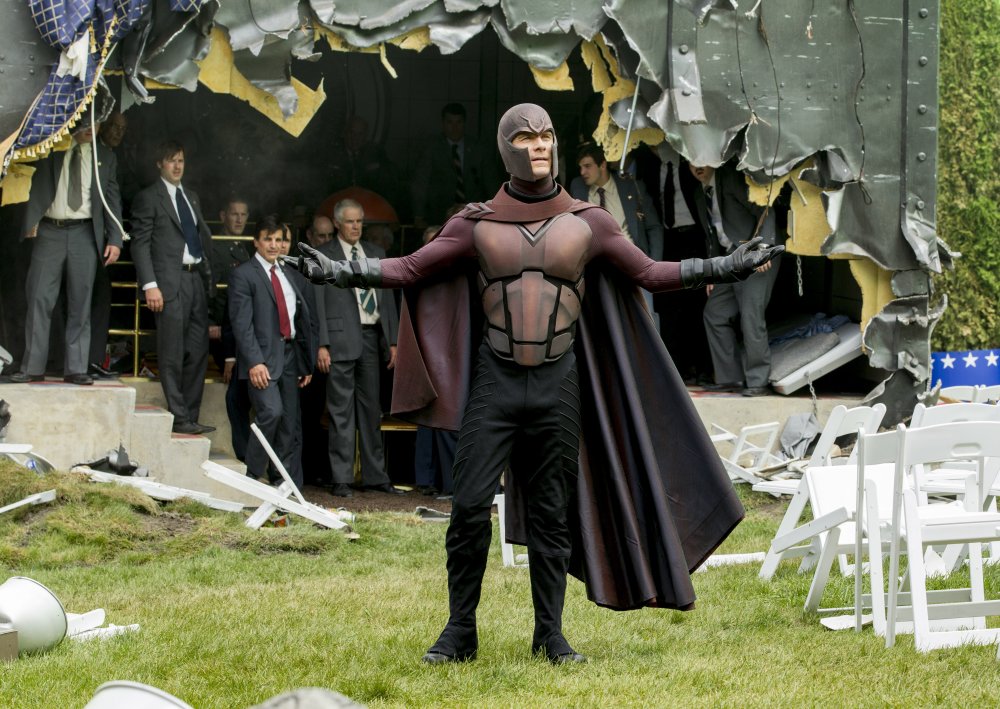 X-Men: Days of Future Past (2014) was Singer’s own eventual answer, and the news was both good and bad. His comfort with immersive digital effects while keeping track of the human beings walled inside them is exceptionally strong. (Singer’s previous film, the immediately forgotten Jack the Giant Slayer (2013), seemed mainly an excuse to try the whole megillah of modern digital fakery on for size as a warm-up exercise; at any rate it’s twice the film that Sam Raimi’s concurrent tone-deaf rehashing of Oz was.) For DoFP, Wolverine gets to go back in time in person for a change and then gets amnesia for a bit as well, so all bases covered there. Above all, Singer and writer Simon Kinberg return again to the source, the belief that self-knowledge matters more than self-amusement. The sight of one character pleading with the better nature of another remains the most potent metaphor on the genre’s menu.

But the playfulness has gone, drained away by modern obligations for night-time storm-clouded dystopias that are duller than digital dirt – and for some modern prudery, with zero chance of Magneto and Mystique going swinging now that they have turned into Michael Fassbender and Jennifer Lawrence, both seeming unhappy and square as a brick. Worse is the apparent loss of nerve through which the filmmakers erased Anna Paquin’s Rogue from the film after initial production, the kind of post-coital futzing with story structure that invites failure with open arms. When the X-cycle first left the blocks it looked like Rogue’s own saga if you squinted a bit; now she’s reduced to a DVD extra. 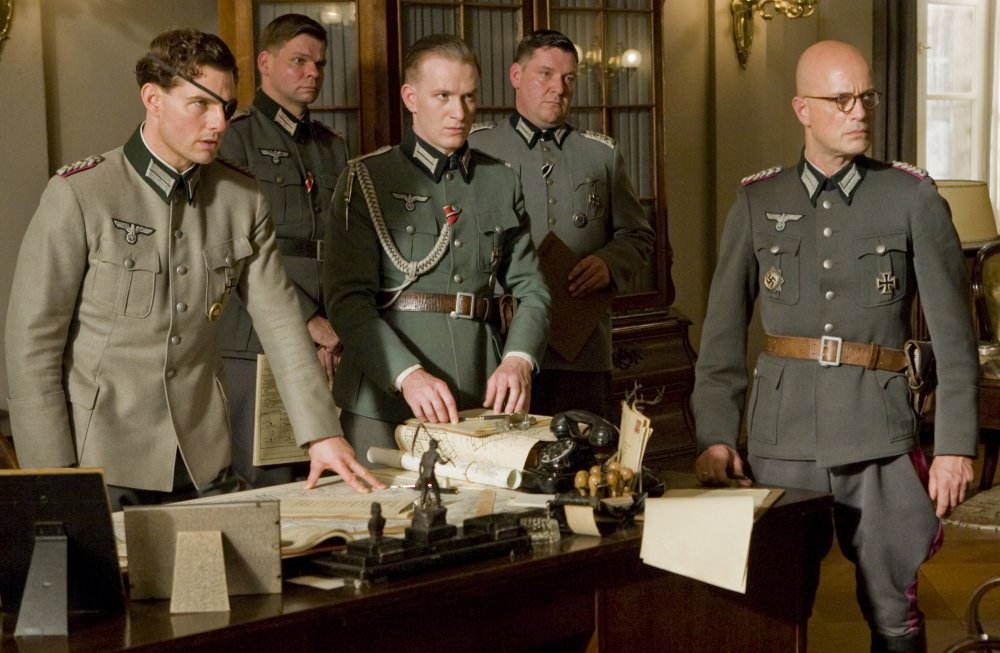 Wolverine ends DoFP with a fresh 50-year hole in his past – same as it ever was. But Singer knows the option of yet another reset button is just a tempting fiction. The most direct engagement with factual memory as Singer’s political project is still Valkyrie (2008), co-scripted by McQuarrie and a Hollywood history epic to the core, presenting Hitler as the grand identity crisis of an entire nation. “We have to show the world that not all of us were like him,” says Kenneth Branagh’s doomed General Plesckow, plotting assassination and trying to claw Germany’s rapidly accumulating lost time back from the pit. His co-conspirator General Beck (Terence Stamp) checks out with the last words quoted in all the character’s biographies, which also happen to swirl in the minds of many Singer characters when the fighting stops: “I am thinking of earlier times.”