V for vitiated: some thoughts on the solemn decadence of Warner-DC’s superhero universe, and the millenarian vision of its annointed svengali Zack Snyder. 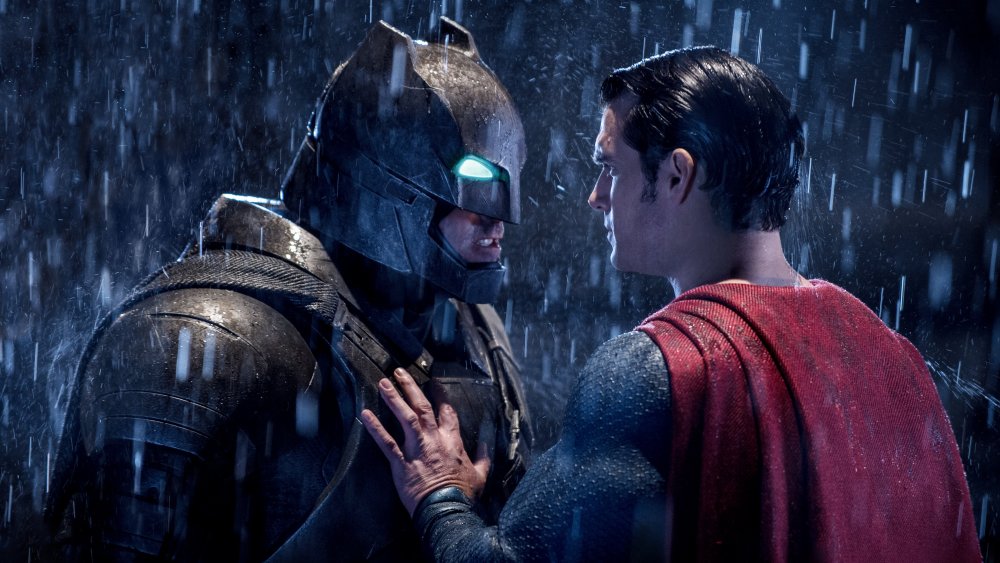 “The event had gone right into the nervous system of America, but Bush now had his mighty mission, and he knew the game that would handle it – Virtual Reality.”

Can pop culture be sincere and mean it? What happens when it voluntarily gives up its outsider-art tendencies and moves wholesale to the centre, climbing the steps to the cultural lectern as a first step towards nailing itself to the cross?

Batman v Superman: Dawn of Justice is on release in cinemas worldwide.

“The acute self-awareness required to dive deeply into these avenues is anathema to the raw energy needed to carry that same work to a sincere and authentic endpoint. The power of trash can’t be replicated by fetishizing its aesthetic, but instead is found in the imperfect rawness of its mutant truths and their resultant imagery.”

Can a corporation be sincere and mean it? Picture the most deeply personal message that a multinational can possibly send, intended as such by the head of the company creating it. The message involves an eight-in-hand hitch of Clydesdale horses crossing the Brooklyn Bridge and pausing to solemnly bend the equine knee before New York’s recently altered skyline – for this is February 2002, while the dust of the World Trade Center has barely settled. It takes the form of a TV commercial for Budweiser, shown only once during Super Bowl XXXVI, and it means that one of the earliest cultural operations made upon the beleaguered American patient post-9/11 was performed by its director: Zack Snyder.

These two sincerities are a mile apart, but both have space for 9/11, looming over the superhero landscape like Auden’s colossal dad. The Marvel Cinematic Universe has minted a brand of fluffy paranoia, its World Security Councils and security forces never quite stamping out the enemy within, its well-intentioned science experiments landing just the wrong side of ill-advised. Stylistically modest and informal to the micron, the films are breathed on by Walt Disney Entertainment’s aspirational approach to character appeal – on your best day you too just might exude the charisma of the MCU’s sunlit, collegiate superbeings – but they don rosy spectacles when circumstances might point towards anything too psychological or obsessive. MCU’s 9/11 analogue, The Battle of New York as depicted in The Avengers, has much falling rubble but suspiciously little hellfire for civilians to fry in.

Warner’s DC superhero films go to a different church. To the surprise of no one reading the comics output of DC writer and now company CCO (and Batman v Superman: Dawn of Justice executive producer) Geoff Johns, their engagement with the real world lands elsewhere on the pain scale. Largely giving wit the boot, they opt for what writer Dirk Deppey lambasted in a long-lost 2009 post for The Comics Journal as superhero decadence – a point of view more appropriate to The Sopranos than Teen Titans. “The results read like an adult crime drama featuring all the excess sex, violence and a zombie-like attempt at the sophistication of an HBO television series but with a cast composed entirely of professional wrestlers.”

Raw mutant 9/11 truths are still possible on screen – Noah Buschel’s profoundly sincere The Missing Person (2009) features future General Zod Michael Shannon and splices Ground Zero imagery with Edward Hopper, before we even get to the insights of Richard Kelly and Eli Roth – but if you hire Zack Snyder then you’ll get something else. The years since those respectful Clydesdales have found the director consistently fretting at the straight-faced world of dreams that George W Bush willed into existence, and in no rush to move on from its Lower Manhattan point of origin.

Snyder’s nervy, depressive, deafening fictions are deeply conflicted about warriors and unwinnable wars, distrustful of the past and the future, fixated on remaking the world as it should be. Squashing the possibility of mutant chance even further, he’s tangled up in a blatantly academic tension between analogue filmmaking on 35mm and overwrought digital unreality. The combination guarantees a vision of pop-culture from the far end of the periodic table, a stab at relevance that overshoots all the way into the Old Testament.

And not just recently either, which is why Warner Bros laying its bet on Zack Snyder for a long-term pay-off was such a clear statement. The 2004 remake of Dawn of the Dead, his feature debut, went into production shortly after Bush’s bizarro “Mission Accomplished” moment on the flight deck of the USS Abraham Lincoln, and was released just as he swept across the 2004 Super Tuesday primaries, a full escape from Iraq looking like Mission Impossible. George Romero’s original film had the shambling dead gravitate to a shopping mall through an echoing consumerist muscle memory, but Snyder’s swift and evil corpses are an insurgency against the cosseted middle class and all their prizes. The opening montage of world collapse hides the message in plain sight, with zombies shown attacking both the White House and an American outpost in a conspicuously Middle Eastern territory. “God, they’re here,” yelps an American reporter on camera as a locally sourced killer relieves him of his imperialist anxieties forever.

For Dawn, Snyder stuck to classical tactics and decent levels of restraint, and put a bunch of sinewy sympathetic performers – Sarah Polley first and foremost – through the wringer, so his sympathies would seem to be with the beleaguered real world. But by 300 (2007), we have stepped into Bush’s VR cubicle and closed the door. 300 shapes the current Snyder template: digitally created environments, drastic colour-grading, faux-overcranked rates of movement for emphasis, fetishised gender masochism and irony levels that slip from their wrangler’s grasp to wander all over the dial.

Primed by Frank Miller and Lynn Varley’s 1998 graphic novel, everyone knew that 300 was talking about foreign affairs, although in film terms the subject is control. In The Virtual Life of Film, David Rodowick wrote: “The digital will wants to change the world. Before the digital screen, we do not feel a powerlessness, but rather express a will to shape ourselves and the world through the medium of information.” Snyder adds an airtight conservatism to all that, a conviction that the virtual reality is the one that matters most. Miller and Robert Rodriguez conjured Sin City out of a purely digital tool box, but Snyder has stuck to working on 35mm film and then shredding all its historical truth-telling associations, throwing the lot of them out for bellicose thought experiments in digital fakery. 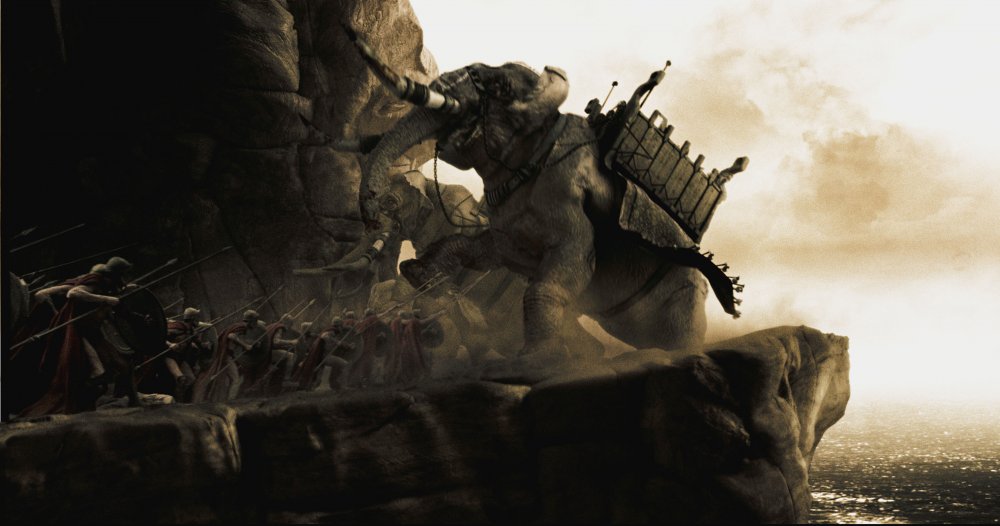 300 took seven times its budget in ticket sales – so after Leonidas, the deluge. On the trek up the line through Watchmen (2009) and Sucker Punch (2011) to the suffering of Smallville and the martyrdom of Metropolis, Snyder’s VR has turned aggressive. Man of Steel’s post-9/11 credentials are hardly opaque, given that Shannon’s General Zod is the ultimate disenfranchised soldier, bereft of a home world after his political masters – bead-draped old-hippie streaks of misery all of them – contrived to turn his entire planet into ground zero. But the tensions between this notionally leftist parable, its Abrahamic antagonists and the conservative fervour of a sealed digital world are almost intolerable, and the film pushes its digital will to power so far up the scale that it implodes.

Super-dense action sequences deliberately attempt to suggest events so brief that the digital animation itself cannot successfully capture them, a fairly breathtaking conceit. Antje Traue’s man-killing Faora-Ul, or her animated animus, zips across the screen in a carefully fashioned blur that is entirely unconvincing as accidental, while occasionally punching human beings so hard they turn into a barely registered splodge of goo on the ground before she roars off like a passing sub-atomic event. 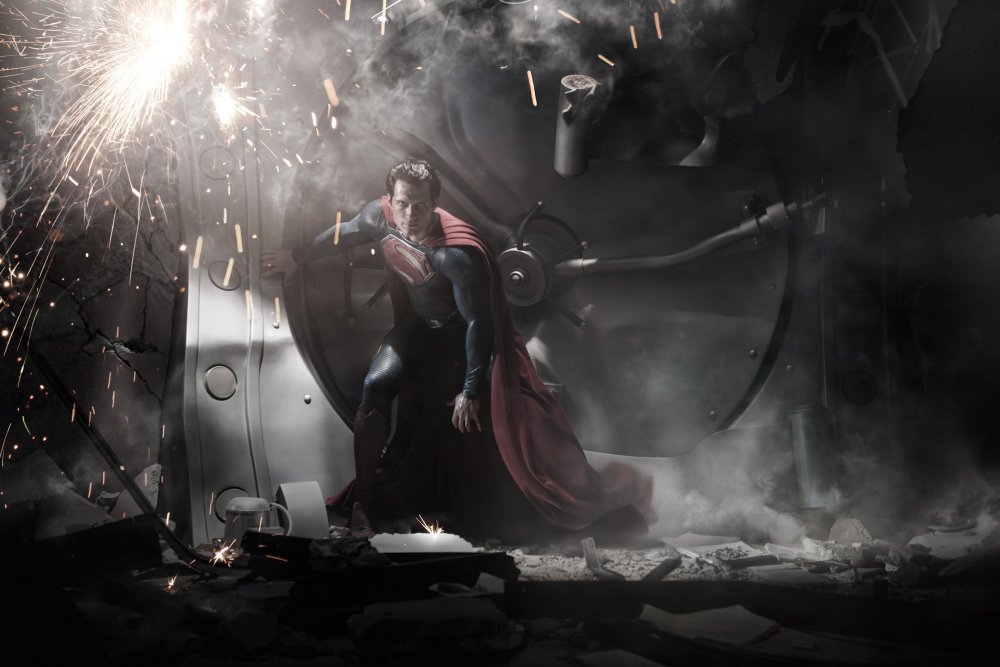 And it’s not just the director in the VR cubicle. In there with him is composer Hans Zimmer, who said that he was after “a score which deals with and celebrates the farmers and the people in the heartland of America… those endless plains,” and proceeded to conjure this via “a grouping of pedal steel guitars instead of the usual string section, banging titanium and steel sculptures, and organizing a who’s-who of drummers.” Aiming for the feelings and mood of the American Midwest – Kansas wheat fields, honest toil, Ma Kent’s homestead – and doing so without any intention of tapping the innate musical bedrock that would conjure that connection for an audience – no Copland, Bernstein, Ives, not even at a remove. A virtual reality indeed. He’s still at it in Batman v Superman: Dawn of Justice, when Gal Gadot’s Wonder Woman – of indeterminate character in the film, although let’s go with the template and assume Greek, philosophical and godly – gets an ultra-modern electric guitar lick that suggests she arrived on a skateboard.

Snyder too walls himself back into a comfortable – i.e. uncomfortable – virtual reality by the time the new film gets to its incurably dull night-time battles between giant special effects, while the shoehorned-in set-ups for future films are unfathomably woebegone. And yet, the first half is a film of a detectably different cape, quite unlike Man of Steel. The 9/11 opening is excused almost immediately by the image it allows of Bruce Wayne acting out the contemporary news reports and running into the dust while everyone else runs in the opposite direction; his subsequent nightmare-driven mania for retribution is a closer look at male self-knowledge than anything Clark Kent is allowed.

The calamitous plot-holes are par for the course, but having young Bruce Wayne undergo an actual ascension to his adult role – an assumption into a life of agony – is surprisingly strong meat, and Jeremy Irons catches the paternal anguish behind the drollery of Alfred the butler in a way Michael Caine never approached. Even Jesse Eisenberg’s twitching, punchable Lex Luthor – despite being pretty much a dead loss – is the first waft of the eccentric to blow across Snyder’s VR clean-room. Snyder initially enables all this through relative restraint, keeping the digital asphyxia under control. Borrowing the Shostakovich waltz from Eyes Wide Shut for Bruce Wayne’s black-tie espionage and chat-up number with Wonder Woman may barely count as a functioning joke, but compared to Man of Steel it’s practically screwball.

They both burn in the digital inferno in the end. All this effort to perfect the gloriously imperfectable. Invoking a version of Frank Miller’s The Dark Knight Returns, as the new film enthusiastically does, acknowledges its influence but overstates its authority; even at the time it didn’t displace other incarnations of the character, which carried cheerfully on regardless on paper, not to mention inside your head.

Film insists on being more definitive, $250-million films most of all; but free an image from accident or fluke and you might just free it from vitality also. Warner Bros’ wish to anchor their airborne mythologies to the rubble of real life remains perfectly explicable, as long as you prefer life in the VR cubicle to anything going on outside.