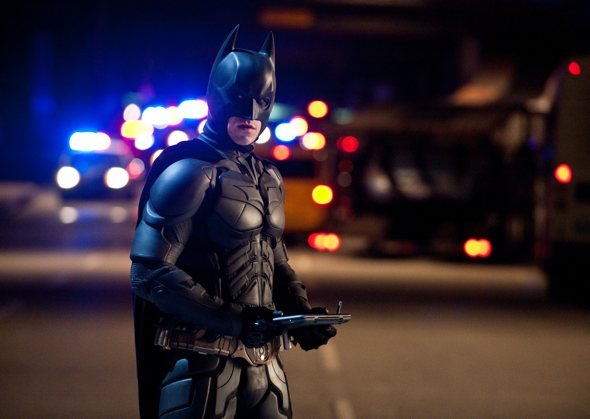 The most memorable joke in Leslie H. Martinson’s fondly remembered ‘campy’ Batman film (1966) finds the po-faced caped crusader (Adam West) running about the Gotham waterfront in broad daylight with a giant fizzing cartoon-infernal device. The hero is repeatedly thwarted in his attempts to throw it in the water before it explodes by young lovers, passing nuns or innocent tweeting birds. “Some days,” West deadpans, “you just can’t get rid of a bomb.”

Christopher Nolan’s Bat-films, which now form a complete trilogy, are about as far in approach as possible from the jokey pop-art tone of the 1960s TV series that spun off that film. However, the whole climax of this epic-length instalment – which plays on a heroic scale, with soaring Hans Zimmer music and floods of tears – turns out to be a variation on that same situation, with a much bigger bomb and the whole of Gotham City in peril.

Needless to say, we are a world away from shark-repellent bat-spray, but the strength of the Batman franchise in all its many forms – from the character’s introduction in Detective Comics in 1939 through to the computer game Arkham City last year – is that the set-up is open to all manner of legitimate, workable approaches.

Following Batman Begins (2005) and The Dark Knight (2008), The Dark Knight Rises has to pick up plot threads from the earlier films. The late Heath Ledger’s Joker goes unmentioned, but every other old foe or threat is present in some form, and we see the toll they have taken on Christian Bale’s limping, grey-streaked Bruce Wayne, who has become a Howard Hughes-like recluse, to the exasperation of Michael Caine’s slightly hectoring Alfred. Harvey Dent (Aaron Eckhart), aka Two-Face, is now remembered as a false hero whose atrocities have been covered up in order to justify what sound like swingeing anti-crime laws (‘the Dent Act’), which have put an end to the criminal empires featured in the earlier films.

The legacy of the Fu Manchu-like Ra’s al Ghul (Liam Neeson) and his League of Shadows is made manifest in the bulky, masked, braggart form of Bane (Tom Hardy), a seeming anarchist in a sheepskin jacket, and the not-too-concealed presence of a literal offspring of the demon out to pay Bruce/Batman/Gotham back for the villain’s failure and death at the end of Batman Begins. Even the Scarecrow (Cillian Murphy), secondary bad guy in both earlier films, shows up, as a Kafkaesque judge in a topsy-turvy Gotham, sitting atop a mountain of desks with straw poking out of his shoulder, offering cops and businessfolk a brutal choice between death or exile (exile involves a short walk across dangerous ice).

The light and dark sides of Gotham City and the hero’s personality are reflected by two women who, as the film progresses, inevitably change positions. Anne Hathaway’s sleek, red-lipped klepto Selina Kyle is never called Catwoman but is identified by the trade name (‘The Cat’) the character went by in her very first comics appearance, while Marion Cotillard’s energy-boosting, new-to-this-universe philanthropist at least gets to have sex with Bruce Wayne before Selina slips into the cat-suit that makes her impossible to compete with. In a film that could use a dash more fun than it has, Hathaway is the only real bright spark, though even she has to pause for significant, character-testing moments as she wavers between mercenary work for the bad guys, a conservative horror at seeing her anarchist dreams realised and the long-held-off but immensely relishable team-up with her masked soulmate in a climactic mass battle for the soul and the real estate of Gotham.

Much of the noise is made by Hardy’s canny thug Bane, a rethink of a villain who was created in the comics to put Bruce Wayne out of action temporarily so that other characters could take a turn at being Batman before the original’s return. It’s hard to remember that Bane, played by the late wrestler Jeep Swenson, was one of the villains in Joel Schumacher’s much despised and franchise-derailing effort Batman & Robin (1997), and here he’s used, as in his comics storyline, to put Bruce in a mid-film hole that he has to crawl out of to rebuild his heroic identity.

Once that’s done and Gotham City is cut off from the rest of America by terrorist attacks – as it was by an earthquake in the lengthy ‘No Man’s Land’ comics story arc – Bane dwindles in stature as Bruce’s inner demons and other problems come to the fore. At the end, he’s almost casually dismissed – on the pattern of Robert Carlyle’s Bond villain in The World Is Not Enough (1999), who turned out to be only Sophie Marceau’s minion.

As befits the saga’s engagement with the economics of Gotham City, a great deal of topical material floats about here, insufficiently digested: an underground army of the dispossessed; a stock-exchange raid that is at once a complicated financial swindle and an Occupy-like blow against the traders; Bane’s through-a-mouthpiece-and-megaphone philosophising about the kind of freedom he offers once he’s driven all the cops underground. There is a deal too much plotty stuff with multiple macguffins: an identity-wiping computer program, a fusion energy project like the one in Spider-Man 2 (2004), electronic signatures, Bruce’s dead mother’s pearls and an undelivered Commissioner Gordon speech revealing the truth about Harvey Dent. 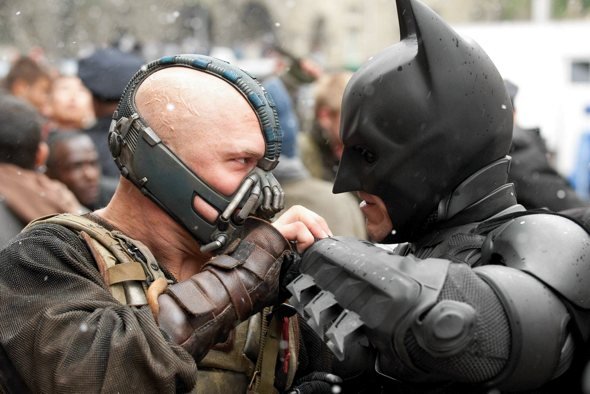 In the end, all this is a distraction. Batman ultimately faces someone who has exactly the same motivation as he does – making a city pay for the death of a father. The cycle must continue even if Bruce can get off the merry-go-round. The film sets up Joseph Gordon-Levitt’s Officer Blake as a successor to the cowl, even before we’re told what his real name is, subtly positioning Juno Temple’s kittenish sidekick (very underused) as the next generation’s Catwoman – but this is a way of closing down the trilogy while implying that the story continues rather than setting up spin-offs.

Two hours and 45 minutes is a long time for a comic-book superhero tale, especially since it’s now the capstone of a marathon three-film saga fated to be a Blu-ray box-set. Even so, there are undeveloped subplots, token roles for continuing characters (Michael Caine’s Alfred, Morgan Freeman’s Lucius Fox and Gary Oldman’s Commissioner Gordon are all sidelined for long stretches) and hurried-to-confused crucial scenes between Nolan’s IMAX-ready action set pieces. These range from an opening gambit in homage to License to Kill (1989) through chases with new Bat-vehicles (a versatile attack bike and a stealth flier) to screen-filling street battles between armies of cops and mercenaries.

Even after decades of big-budget superhero movies there’s still a problem with fight scenes between opponents in constricting costumes, which work less well than the crudely dressed rumbles seen in the 1940s matinee serials that were the characters’ first film appearances. Without spider-powers or other mutant abilities, this relies on mixed-martial-arts choreography rather than obvious CGI assistance, but the supposedly epochal punch-up between the Bat and the Bane really doesn’t bear the weight the script needs it to.

The film takes two long acts to come into focus, and only really fulfils the promise of the set-up once Bruce gets out of the hole (the secret is not to use a safety-rope but to rely on strength of character). The extended climax riffs satisfyingly on heroism, self-sacrifice, Greek tragic levels of vengeance-seeking, dead daddy issues, urban destruction and renewal, citizen power, escape and rebirth and a happy-sad ending/beginning.