Warners DC’s amphibious Justice League also-swam superhero gets a feature outing and colour palette of his own; the film fails in sympathetically old-fashioned ways. 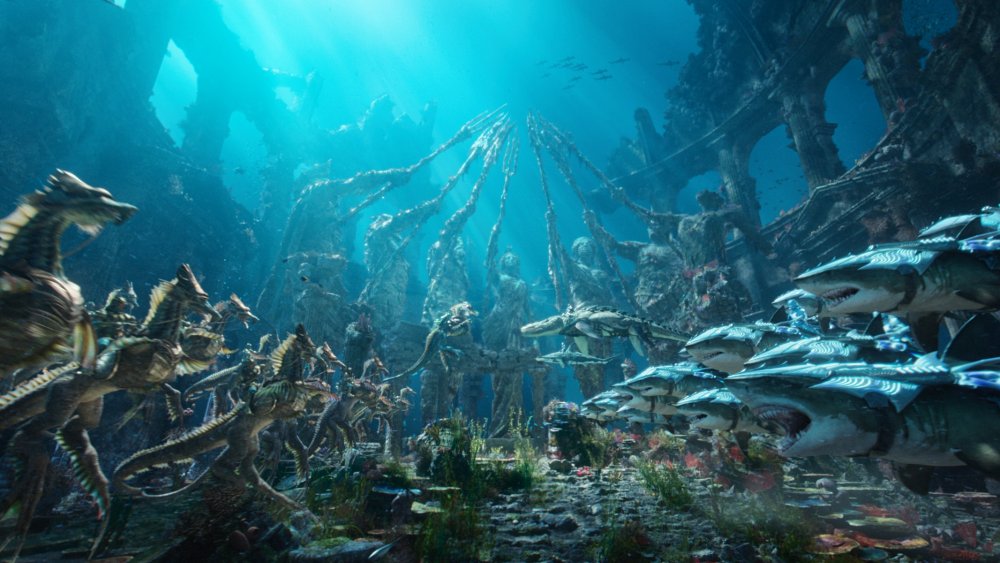 Into the blue: Aquaman

Glimpsed lurking in the depths in Batman v Superman Dawn of Justice and roped in to serve as back-up muscle (and comic relief) by the more iconic heroes of Justice League, Jason Momoa’s Aquaman gets his own vehicle as part of Warner Brothers’ increasingly wayward attempt to wrestle the IP of DC Comics into a cinematic universe to rival Marvel’s ten-year, multi-franchise run.

In one of several voiceover patches which attempt to explain exactly what Arthur Curry’s super-powers are, it’s established that his eyes adapt underwater so he can see in the darkest deeps of the ocean. Thus, long stretches of this meandering traipse of a movie are presented in Atlantean vision, with an appealing palette dominated by purple, pink and turquoise bioluminescence. The hordes of imaginary undersea creatures which rally to the hero’s trident or briefly give him a hard time come across as more aggressive versions of the made-up fish that swim through The Life Aquatic with Steve Zissou. It’s a refreshing change from the gloomy, dark look of recent DC movies, but also gives the hero’s own element the feel of the animated under-the-sea stretches of Mary Poppins.

Often the butt of jokes about his uselessness on shows like Entourage, South Park and The Big Bang Theory, Aquaman struggles to cut anything other than a ridiculous, camp figure. His arc takes him from gruff, drunken, tattooed, manbunned oaf to free-floating, trident-wielding monarch in gold scaly shirt and green scaly tights (traditional Aquaman costume since his 1941 comics debut).

Created by editor/writer Mort Weisinger and artist Paul Norris as a rival to Marvel Comics’ popular Sub-Mariner, Aquaman has generally been a back-up feature or second-string hero. Attempts to reimagine him as gritty or dark, after the fashion of superhero comics in the last few decades, make him even more derivative of the Sub-Mariner, who was half-breed rightful king of Atlantis well before Arthur Curry. Justice League lifted from the cartoon Batman: The Brave and the Bold, which turned Aquaman into a back-slapping, life-loving, overbearing Brian Blessed sort. That approach is toned down here, though elements remain in the comic bickering of Momoa’s Arthur and Amber Heard’s copper-haired, sparkly green-fishtarded heroine Mera as they wander the globe (the Sahara desert, a Sicilian town, a dinosaur-inhabited lost world) in search of a magic trident.

The structure (and, alas, the numbing repetition) are out of vintage chapterplays (the Atlantis of Sub-Mariner and Aquaman are both influenced by Undersea Kingdom, 1936, which was a waterlogged Flash Gordon) with self-contained episodes, guest menaces (impressive monsters, grudge-holding pirate Black Manta) and busy action scenes filling in between the hero’s two big fights with his sneery half-brother/arch-nemesis.

Known for horror franchises (Saw, Insidious, The Conjuring), James Wan cut his nonsensical action teeth on Furious Seven and remains an enthusiastic, old-fashioned filmmaker who sometimes doesn’t know when to stop. Here, Wan upfronts sources wittily – with a TV clip from Gerry Anderson’s Stingray and a paperback of H.P. Lovecraft’s The Dunwich Horror onscreen during the long prologue – and stages memorable splash panel images (a shoal of fish in formation backing up young Arthur as he faces down bullies in an aquarium). But this is easy to caricature for not-quite-amusing sillinesses (Nicole Kidman eating a goldfish, Dolph Lundgren riding a seahorse, an octopus drummer) and is as bizarrely hung up on trial-by-combat monarchism as Wonder Woman, Black Panther, Thor and a surprising number of ‘one true ruler’ superhero franchises.

Because Aquaman never really had much personality, Aquaman isn’t as annoying as Man of Steel, Batman v Superman or Suicide Squad – which actively mangle interesting themes and vivid classic characters – but is an overstuffed B picture which stretches its fun too thin.