The world at sea: The Forgotten Space

Kieron Corless hears film essayists (or are they?) Noël Burch and Allan Sekula chew over their epic and sobering new portrait of high-seas globalisation. 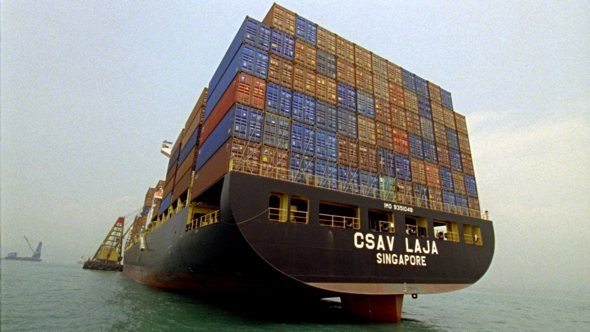 The essay film is a notoriously slippery and hard-to-define category, in spite of the long overdue scrutiny and debate it’s been generating of late. Two books published on the topic recently (Laura Rascaroli’s The Personal Camera: Subjective Cinema and the Essay Film (Wallflower, 2009) and Timothy Corrigan’s The Essay Film: From Montaigne, After Marker (Oxford, 2012) attest to an emerging space within film studies, following on from an influential and extensive 2007 Vienna Film Museum retrospective curated by one of the foremost film essayists, Jean-Pierre Gorin. (For those who can get their hands on it, the catalogue put out with the Vienna programme is an excellent primer, particularly for Gorin’s lucid, insightful introduction, the best attempt I’ve yet read to define the essay film.)

From a UK perspective, there have always been very particular strains of essay filmmaking here, which can still be seen flourishing in recent films by Patrick Keiller, Chris Petit, The Otolith Group, Sarah Turner and Adam Curtis. These have built on pioneering works from the 1970s, 80s and 90s by the likes of Laura Mulvey, Peter Wollen, Malcolm le Grice, Black Audio Film Collective and Noël Burch, traceable back in turn to Humphrey Jennings, Mass Observation and even before.

Tate Modern’s film curator Stuart Comer has done as much as anyone in helping to raise the essayistic mode to its current prominence; last summer, just after the riots, a timely screening of the brilliant Handsworth Songs led into a charged discussion with former members of the Black Audio Film Collective, presided over by Kodwo Eshun of The Otolith Group, who not long previously had co-curated a retrospective on the stalwart German essay filmmaker Harun Farocki in the very same space. 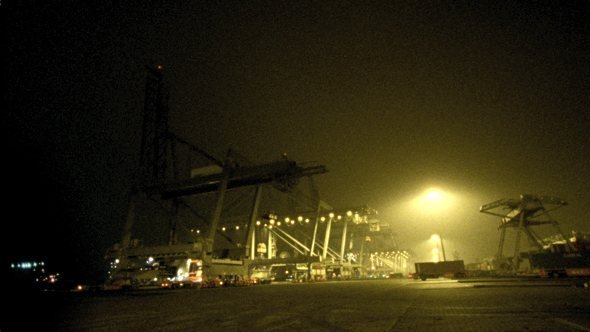 An epic critique of capitalism

The momentum was maintained in early May with the screening to a sold-out Starr Auditorium of Burch and Allan Sekula’s The Forgotten Space (website). Not only one of the most striking essay films of recent times, it’s also the most sobering and farsighted film I’ve yet come across on the deleterious effects of globalisation on both individuals and nation states – an epic subject, tackled here through the prism of containerisation and maritime trade.

The sea itself turns out to be the forgotten space of the title, since most people – me included – are unaware that more than 90 per cent of the world’s cargo travels by sea, through gigantic ports such as Los Angeles’ Long Beach, situated at such a remove from their host cities as to be almost invisible. Far from being the repository of romantic visions of yore, of great voyages of discovery and adventure, the sea – thanks to containerisation – is now the prime facilitator of globalised trade, with all the exploitation, upheavals and displacements that entails. This new reality is nailed by Burch and Sekula’s film with measured, eloquent rage.

There’s no UK distributor as yet for The Forgotten Space, but a significant buzz has been building around the film as it’s travelled the festival circuit (see Sukhdev Sandhu’s Guardian article, and pieces in Afterall magazine and on Jonathan Rosenbaum’s website). Unless some enterprising distributor picks up The Forgotten Space (and there’s clearly a sizeable audience out there for it), it looks as if the Tate’s two screenings will almost certainly be the last opportunity to see it here, a forlorn commentary not only on the straitened state of film exhibition and distribution in London and the UK but also on our degenerated TV culture. 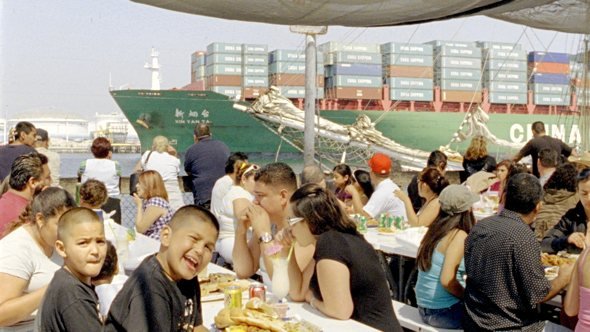 Just as involving as the film itself was a two-hour-plus discussion involving Sekula, Burch and art historian Benjamin Buchloh the night after the first screening about the aesthetic and political issues the movie raises – testament to its urgency and currency, and the Tate’s prioritisation of debate per se (the whole event was filmed and can be watched on the museum’s website). That discussion sprang not a few surprises and produced intriguingly dissonant moments, of which more shortly. It also served to open a window onto the ideas of two unique practitioners who began collaborating back in 1981.

Of the two, Burch is more likely to be familiar to S&S readers as the director of more than 20 documentaries, as well as being one of the foremost English-language theoreticians of film, particularly in relation to early cinema and matters of form, in seminal texts such as Theory of Film Practice. Sekula has been much more associated with the art world through his photography and influential theoretical writings on the photographic image. Where their paths cross is in a shared political approach to the image, and as chairperson Comer elegantly phrased it, an interest in how “politics, form and social critique interrelate”.

The idea for The Forgotten Space came about from a photographic book Sekula published in 1995 called Fish Story, and in particular one essay in it called ‘Dismal Science’, which in turn led to lengthy discussions with Burch about perceptions and ideologies of the sea. Gradually, as the film was shot and assembled over the course of six to seven years, in several countries including China, Holland, Hong Kong, Spain and the US, a script and a thesis emerged: the story of a logistical system – globalised capitalism – enabled by the explosion of mechanised trade on the oceans, using cargo as a broad political category.

The filmmakers soon identified the container, that ubiquitous anonymous box, as the carrier of multiple meanings in this regard, as well as supplying a resonant central image – a stack of multicoloured containers on a cargo ship with the horizon in the distance – that they return to repeatedly. In some ways the sea becomes a mirror of the financial world, with similar invisible, destabilising flows and currents across the globe making it impossible to grasp in any totality; in fact Burch and Sekula were soon able to make explicit reference in their narration to the financial crisis, which unravelled during the period they were filming. 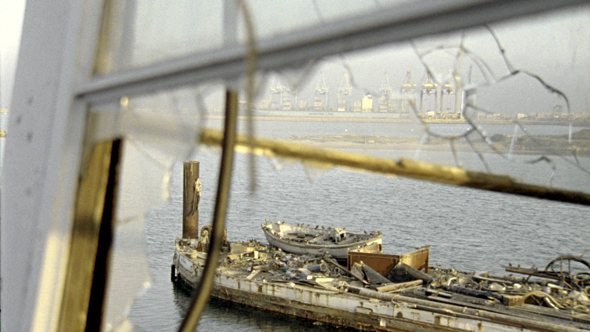 ‘The stupidity of the system’

Much of the film’s impact, as with the essay film at its best, derives from being privy to the flux and digressions of thought in process, in action. The argument put forward by Sekula’s voiceover is sophisticated, engaged, attuned to details as well as the bigger picture; woven into the mix are archive, film clips and interviews with workers, unemployed people and others directly affected by developments in globalised trade. There’s no attempt at spurious BBC-style balance or objectivity.

In the debate, both collaborators made reference to a series of productive tensions generated by their different experiences and ambitions. The agitprop legibility cleaving to commonly accepted documentary codes favoured by Burch, who described his aim as “to stir up awareness of the stupidity of the system”, prompted scepticism on the part of Sekula at such a mechanistic, ‘switch on the masses’ model. He in turn seemed to lean towards a more formal, intellectual approach, alive to less easily assimilable ambiguities.

The film miraculously holds both in balance – as Buchloh stated at one point, “It’s the first truly extraordinary work I know of on global culture”. Another contradiction: although the film ends on a note of hope, there’s little beforehand to support that; and if the film is in many respects a partisan eye-opener and call to action, overall the tone is elegiac, imbued with a contemplative melancholy. There’s a residue of self-aware guilt too, a recognition that we all buy into and produce the system as consumers, and to that extent we’re all trapped. 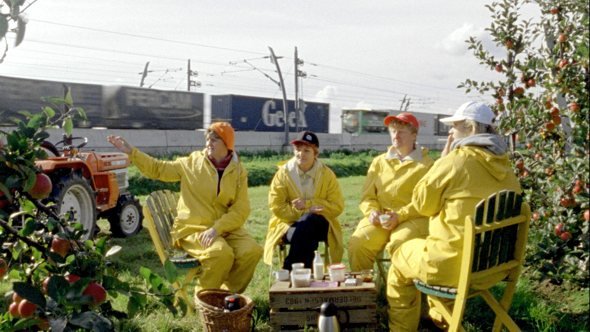 But is it art?

The differences between the two collaborators emerged via another tension, between the film and art worlds, thrown into further relief in this particular venue. Buchloh’s opening remarks, unsurprisingly for an art historian, tended to situate The Forgotten Space in the perspective of Sekula’s earlier counter-conceptual theories, and invoked the still-valid currency of Victor Burgin’s famous phrase “the representation of politics or the politics of representation” as a model for discussing it.

Burch, who later spoke of his own “conversion” away from formal, modernist preoccupations to issues of gender and content, clearly leant towards the latter. “I want to tear this film out of the hands of the art world. What it’s about is not the form, it’s a film of intervention.” 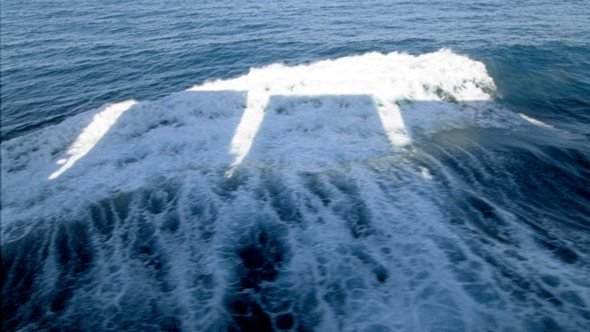 This led to a further disavowal on Burch’s part, around the notion of the essay film itself, a phrase he apparently coined way back when, and which is used as a self-description in The Forgotten Space’s opening credits. Despite that, Burch now maintained that the essay film was a “myth”, preferring instead the phrase ‘hybrid documentaries’ to describe not only The Forgotten Space but the films he made in the UK in the 1980s, which looked back to Dziga Vertov and Brecht in their anti-illusionist efforts to destabilise the viewer, in tune with a theoretical zeitgeist spearheaded by Screen journal. But this short-circuiting of The Forgotten Space’s connections to an essay-film tradition felt like a missed opportunity in terms of illuminating the film’s formal strategies. The debate would no doubt have benefited from the steering presence of Kodwo Eshun, a long-term connoisseur and practitioner of the essay film, unfortunately unable to attend that night.

It’s worth noting that the film was made exclusively with public money – £700,000 (€880,000) of it. That scale of public subsidy for a film like this, a trenchant anti-capitalist critique, is unlikely to happen again for a long while as the cuts bite deeper, especially in Europe. (Portugal, for example, has recently switched off film funding completely.) Even more reason to seek it out.

Related to The world at sea: The Forgotten Space