Strife and the city: urban space and the essay film 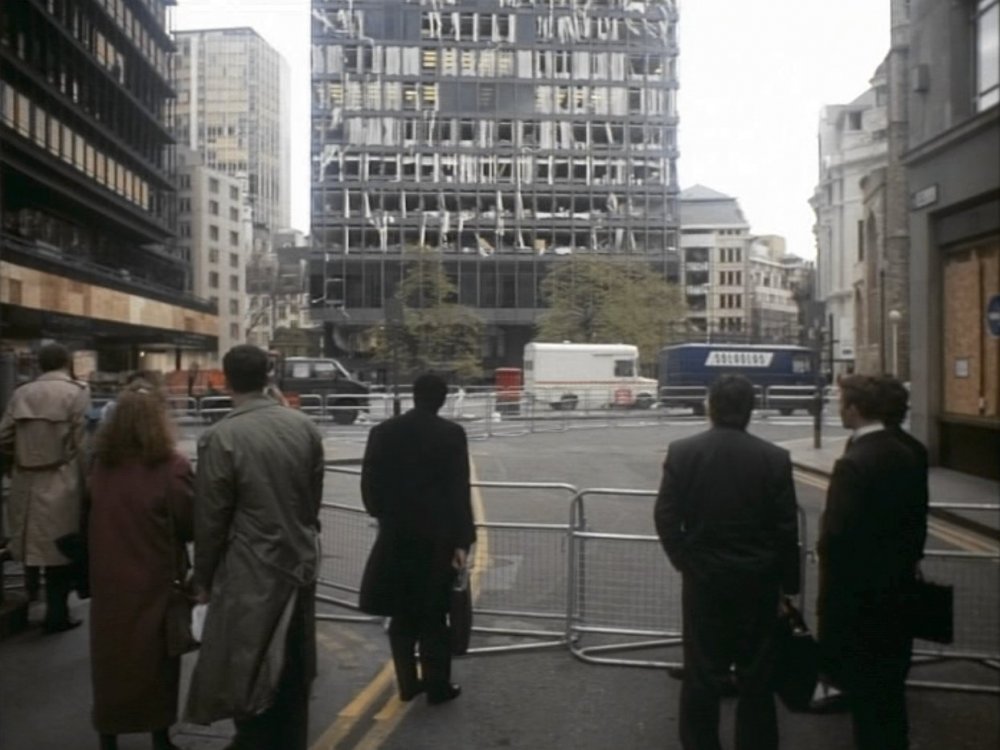 Terrors of yesteryear: the IRA leaves its mark in Patrick Keiller’s London (1994)

Cities are the frontlines upon, within and around which our most fundamental struggles are daily fought.

The inaugural Essay Film Festival is running at the ICA and Birkbeck Institute of the Moving Image, London until 29 March 2015.

The retrospective Jem Cohen: Compass and Magnet encompasses features, shorts, music videos and a live multimedia performance at the Whitechapel Art Gallery, Barbican and Hackney Picturehouse on various dates between 31 March and 28 May 2015.

Take, to begin with, those struggles for things as simple and yet somehow complicated as workers’ rights, gender equality and racial parity – and the active, top-down struggles against these. Take the drive for profit and for surplus capital, and the explicit and unspoken suspicions, prejudices and hostilities that these underpin – and then movements that challenge them, from the Paris Commune to Occupy.

All of these struggles heighten and are sharpened by city life, whose biological makeup is one necessarily of cultural and social diversity. At their heart is the battle for (and indeed against) the general principles of egalitarianism: no one is superior or inferior to anyone else because of their class, age, race, gender, religion and so on – and each has the right to what David Harvey and other geographers and activists call the urban commons: “The city is the site where people of all sorts and classes mingle, however reluctantly and agonistically, to produce a common if perpetually changing and transitory life.”

Though not every day is a riot, urban space is contestable and contested in other ways. How we aesthetically and conceptually frame territories conditions the way in which we think and talk about them morally, the way we approach and dissect them politically, the way in which we engage with and respond to them socially. Do we look up at the city or look down at the city? Do we live in its exclusionary, gated communities or its harried, misrepresented tower blocks? Are our jobs at an elevated remove from its streets or do we only know the abandoned shop front from which we appeal to others each day for spare change? 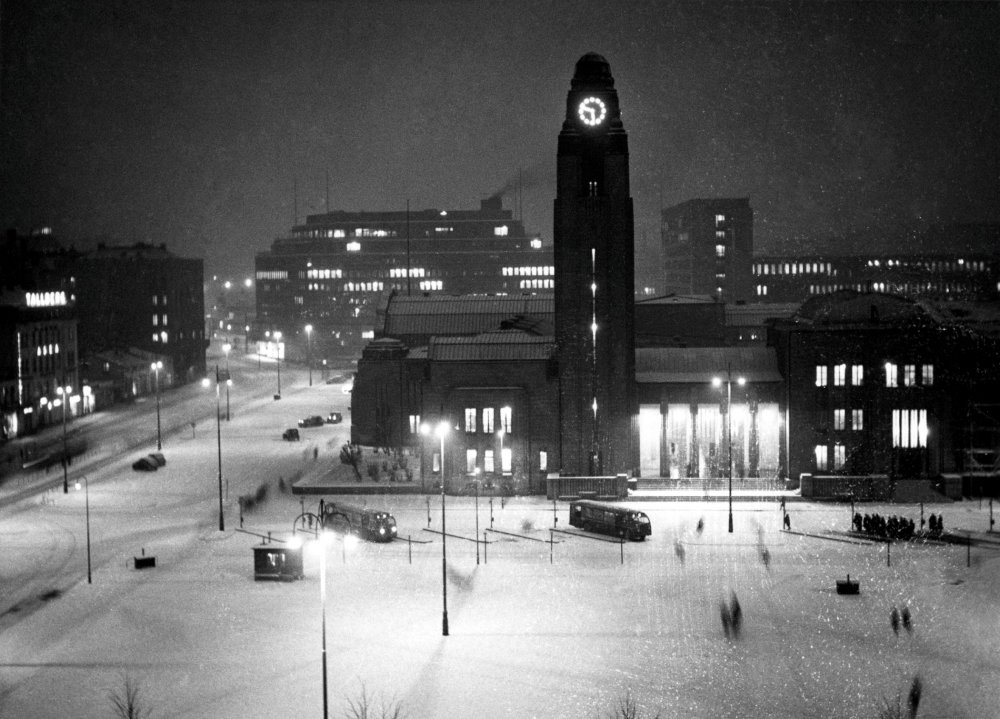 In essence, it’s this: do we defend private property rights or do we seek or agree with their destruction – and if so, either way, how? To answer this question is also to ask another: do we see urban space as an immovable, nebulous entity whose economic engine is analogous to nature’s pecking order (ergo, those who arrive at the top, however their means, deserve to be there), or as something that is, along with the marketplace, actively constructed and therefore never irredeemable in terms of ownership? (And who owns our cities anyway?)

Urban space is objective and physical (London’s boroughs and bridges, its river and subterranean sewage system) and it is also subjective and psychological (the stresses, fears, private jokes or flights of fancy felt during a daily commute). It is painterly (a Turner sunset), it is diagrammatic (the Underground map), it is recordable and interpretable in innumerable ways (Iain Sinclair’s Lights Out for the Territory) and by necessity it must always undergo change (read just about any entry in Nairn’s London to see evidence of a city enduring ceaseless architectural reformation).

It is because of these multiple and overlapping ways in which urban space manifests itself that the cinematic medium, at once objective and subjective, is particularly suited to its representation – and not just because cinema’s birth coincided with an exponential drive toward the urban. 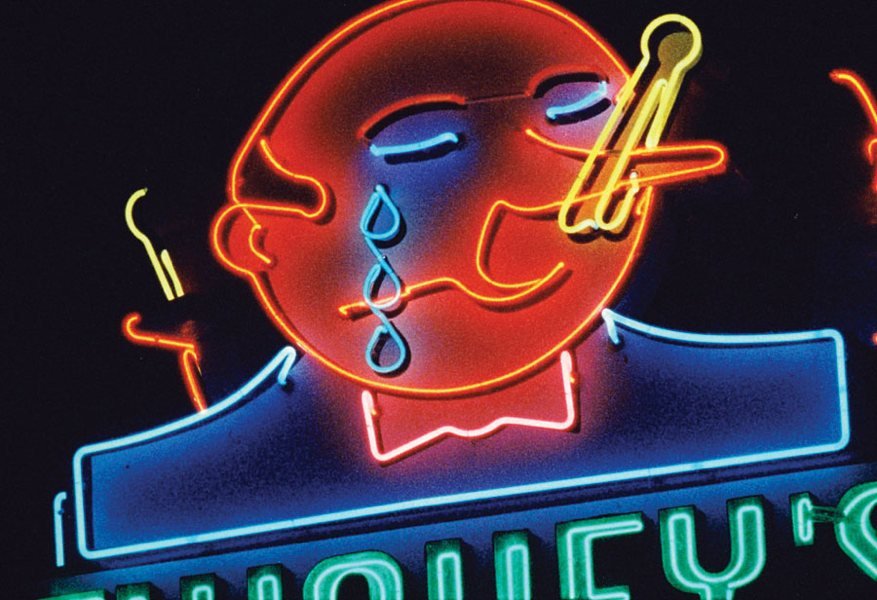 Essay films seem especially suited to the urban, precisely because they encompass a mode of cinematic expression inclined toward the wandering philosopher (the meandering flâneur), a subjective polemic and a feisty oppositional politics. Consider Tokyo as experienced through Marker (Sans Soleil, 1982), New York through Akerman (News from Home, 1976), Helsinki through Von Bagh (Helsinki Forever, 2008), Birmingham and London through Akomfrah (Handsworth Songs, 1986), Bucharest through Farocki and Ujica (Videograms of a Revolution, 1992), Los Angeles through Andersen (Los Angeles Plays Itself, 2003/2014) or London through Keiller (London, 1994).

It’s relatively cheap to make an essay film, and as a particular kind of auteuristic, autonomous filmmaking, essay films are at some remove from the budgetary and creative complexities of a commercial cinema. Against the latter, whose working model is one of creative collaboration as well as of industrial exploitation, the essay film accommodates a more local practice, which can be undertaken by any individual with access to appropriate equipment.

Because of its practicability, the essay film presents (per Timothy Corrigan) an opportunity to filmmakers and artists who are marginalised within or excluded from the white male heteronormative tradition, who (per Paul Arthur) can subsequently take it up “as an instrument of creative struggle” to interrogate “received wisdom or status quo ideologies from a left perspective.” 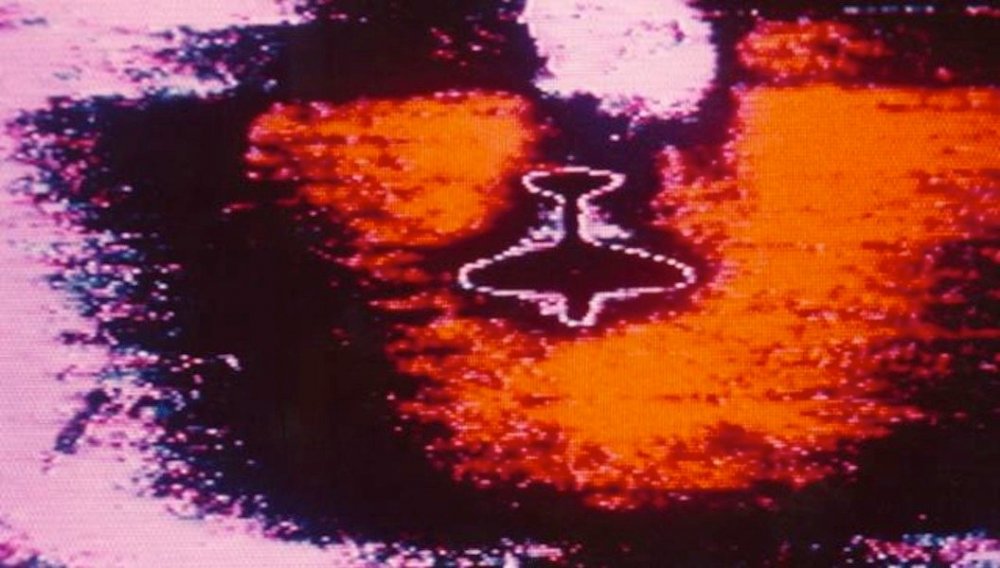 And from an aerial perspective too. From Michael Mann to Ron Fricke, Christopher Nolan to Jem Cohen, more and more filmmakers in general are taking to the skies to foreground city space as the site of today’s most urgent and far-reaching narratives. This glorious, beautiful aerial footage of metropolitan sprawls has an innately surreal quality.

Seen from the air, cityscapes – especially at night, it seems – take on ethereal traits, the ephemeral nature of their uneven development (there a new stadium, here an abandoned industrial estate) heightened by the eerie silence that air travel, removed from ground-level cacophonies, affords.

It’s no coincidence that Cohen’s latest essay film, Counting, opens with the view from a window seat in a propeller plane. Such views, as experienced in real life, aren’t just surreal: they are, today, accordingly cinematic. We might even say they are transformative, because it is here, perhaps more than anywhere else, where cities exist as objective, digestible entities as well as sites of subjective rumination, of anticipation and apprehension. 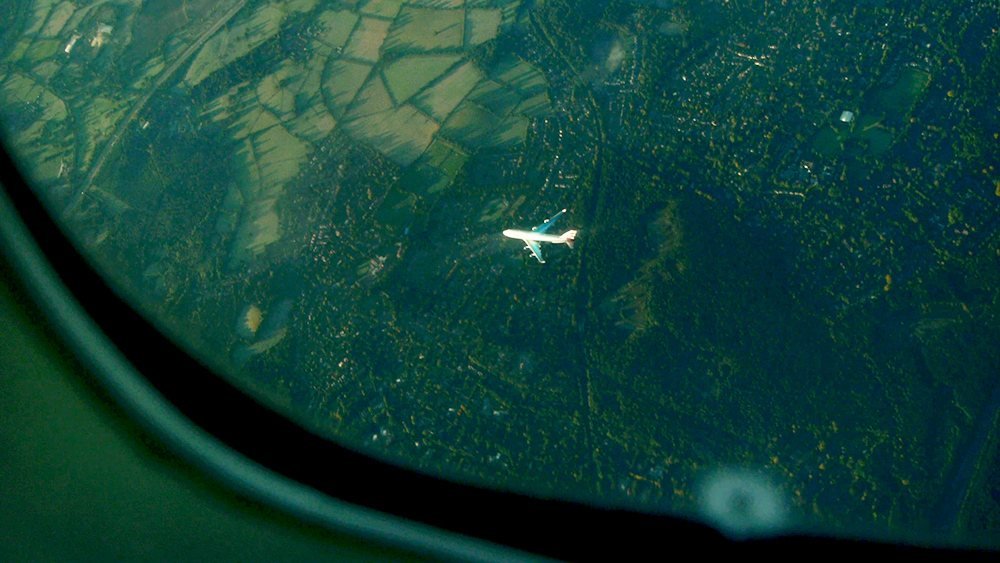 Think of the way one’s stomach might inexplicably jitter when a passenger plane is entering its final descent, or the way in which the heart flutters upon first sight of those tiny little twinkles below, and the infrastructural backbones that interconnect them. (Air travel has the increasing sense of being transported from one city hub to another city hub, with an apparent nothingness in between.)

It isn’t long before Counting cuts, abruptly and startlingly, to a more grounded mode of transport: a New York City subway carriage, on what might be – given the preceding image – an inward-bound journey, perhaps from an airport or other distant outpost, into a more built-up centre, before Cohen drops us off onto street-level proper: Broome Street and the surrounding locales of Lower Manhattan.

These are disorienting or distorted views. On the subway, Cohen films a reflection (“Do not lean on door,” a sign reads backwards). The street views are all shot with varying degrees of distance between camera and subject: we see workers chatting inside a workshop (the exterior sound continues, with no access to what they are saying), we observe shop-fronts from across the street (traffic passes between), we survey a lodging from behind some wintry, leafless tree branches. 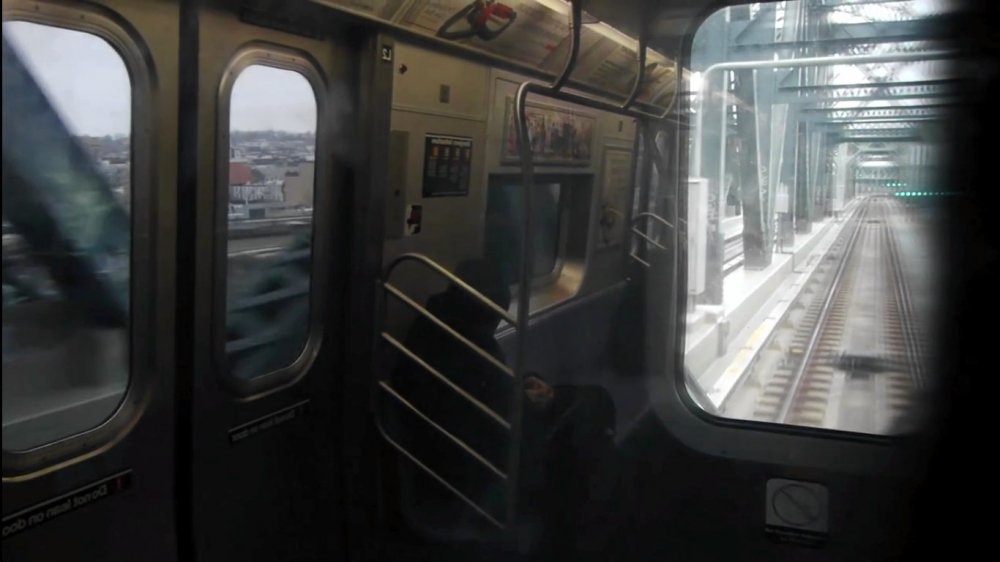 In each instance, Cohen’s camera has a slight shake, suggesting he didn’t have time for something as fussy as a tripod. It also emphasises the subjectivity at work: this is to be a distinctly personal affair, a diaristic effort in line with his earlier shorts Buried in Light (1994) and Lost Book Found (1996), idiosyncratic celebrations of the weird, neglected and under-seen in Eastern Europe and New York, respectively.

In Counting, Cohen finds one lost page from The World’s Last Mysteries, a 1977 publication released by Reader’s Digest. The page header reads: “Abandoned cities and lost civilizations, catastrophes that erased whole nations, awesome monuments left by strangers of long ago – if you think you live in an enlightened age, think again!”

In offering contemporary views of cities like Istanbul, Porto, Moscow, St. Petersburg, London, New Jersey and, repeatedly, New York City, however, Counting goes beyond a local framework, suggesting a curiosity for the ways in which these disparate cities might be linked. Cohen spends time shooting Istanbul’s Taksim Square, months after nationwide demonstrations erupted in response to the violent eviction of a sit-in protest against urban development plans for the city’s Gezi Park. 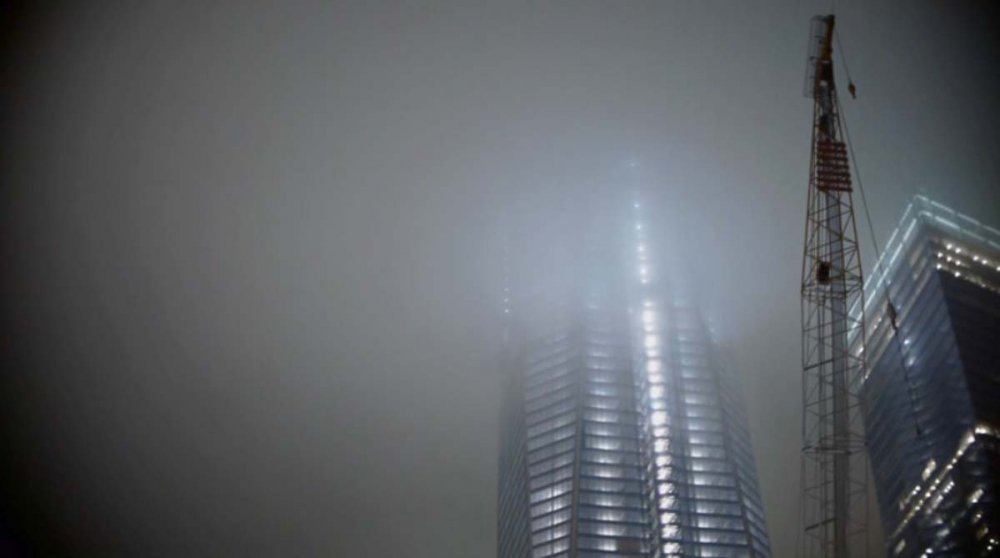 Elsewhere, in Moscow, two street performers scrape a living impersonating those uneasy allies, Lenin and Stalin, with amusing benignity. Cohen tells us, by intertitle, that the pair was filmed – again, from a voyeuristic viewpoint – in the shadow of a luxury department store under construction. This is the human cost of predatory real estate and urban planning; displacement can occur not just geographically, but by economic dispossession too.

What links Taksim Square to a backstreet in Moscow, to a sign in Manhattan stating ‘Sidewalk Closed’ or to any other urban environment in the world? If Cohen’s latest essay film is about anything, it is the enclosure and expropriation of land and property by big-business construction companies and their political and class cohorts. Though the filmmaker retains a stubbornly ordinary perspective in his enquiry, relegating his explicit politics often to the subtextual shadows, Cohen’s film is drawn repeatedly and tellingly to the very fabric of urban life.

Limitations in perspective appear to be built into the essay film – and contradictions emerge accordingly. The very subjectivity intrinsic to the form appears to hinder its apparent attempt to frame a genuine alternative politics. As Corrigan argues, the essay film is defined in part by “a politics whose core is ideological instability.” Indeed, if the strength and practicability of any oppositional struggle is determined by its collective organisation (consider here Abahlali baseMjondolo, South Africa’s shack-dwellers’ movement, or the Arab Spring), then the inherent individualism of the essayistic seems to undermine such resistance. Counting is not Occupy (nor does it wish to be), and seems even to make a point of coming to Taksim Square a few months late. 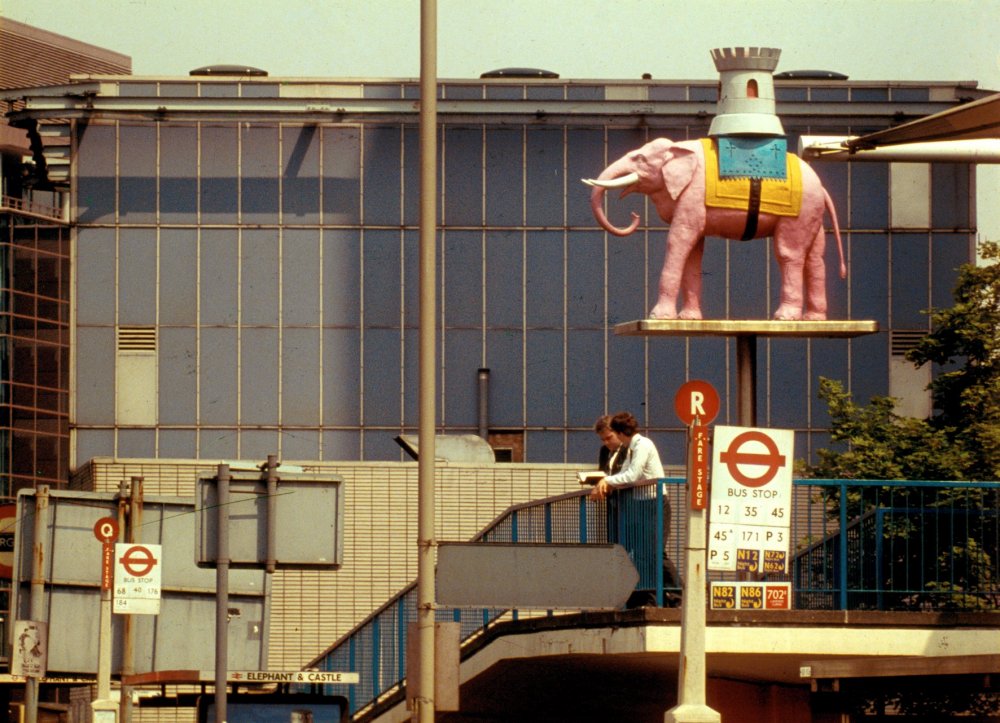 None of this is to suggest that such contradictions can’t be enjoyed or even embraced, and the diversity of forms and appearances that the essay film assumes reflects, in essence, the immeasurable variety of subjectivities, needs and desires for which urban life must cater. At its most potent, pertinent and irreverent, however – and Cohen’s film is for large stretches all of these – the essay film takes aim at the very processes and forces that condition the nature and extent of our everyday struggle for a better way of living. It’s a battlefield, all right. 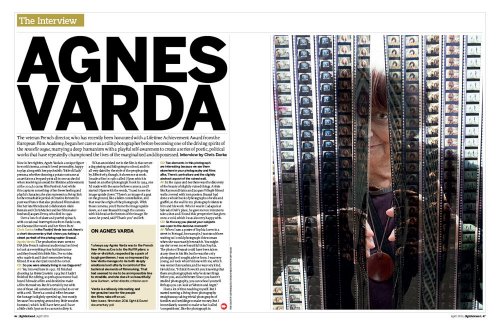 The veteran French director, who has recently been honoured with a Lifetime Achievement Award from the European Film Academy, began her career as a stills photographer before becoming one of the driving spirits of the nouvelle vague, marrying a deep humanism with a playful self-awareness to create a series of poetic, political works that have repeatedly championed the lives of the marginalised and dispossessed. Interview by Chris Darke. 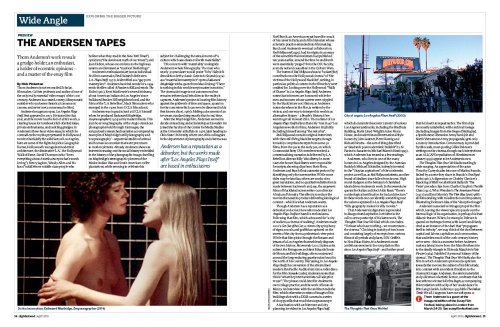 Thom Andersen’s work reveals a grudge-holder, an enthusiast, a holder of eccentric opinions – and a master of the essay film. By Nick Pinkerton.

Related to Strife and the city: urban space and the essay film