At home (and away) with Agnès Varda

Free-spirited grande dame of the cinema and now gallery, Agnès Varda can’t stop moving, gleaning, probing. “We are millions,” she tells Daniel Trilling, welcoming him into her living home of cinema. 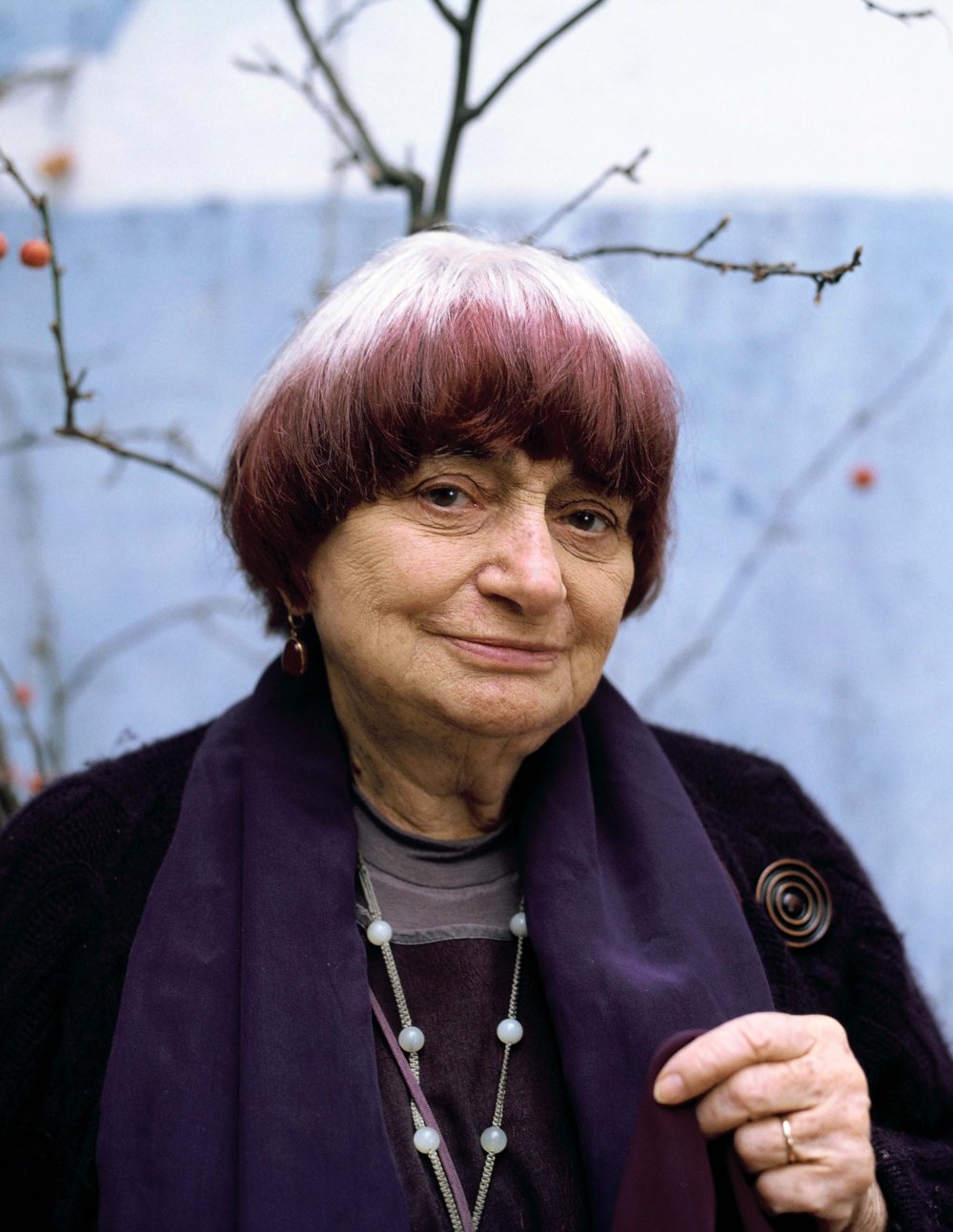 “They sold everything at auction. The houses, the cars, his bed. The bedcover, the cups. The armchair. Everything was sold one piece after another, including the pieces of his films. Remember The Seventh Seal? You know the chess game? They sold that.”

An alternative version of this interview appears in the April 2011 issue of Sight & Sound.

I’m sitting with Agnès Varda in the living room of her house on the rue Daguerre, Paris, her cat Nini curled up into a little ball of contentment on my lap, and she is telling me of her heartbreak at Ingmar Bergman’s death. Not so much the event itself – at 82, loss is hardly a foreign concept to Varda – but because it seems to go against every fibre of her being to see an artist’s life dismantled in such a perfunctory manner. “I believe very much in transmission,” she says, explaining how pleased she is that her actor-director son Mathieu has followed her (and his father, the late Jacques Demy) into film.

At one point in Varda’s film memoir The Beaches of Agnès (2008), which reflects on a life devoted to her art – her role in shaping the nouvelle vague; her unique and varied output of dramas and documentaries; her parallel career as a photographer and, latterly, installation artist – she declares “I inhabit cinema”. A visit to the rue Daguerre reveals a more literal meaning to this. The house, a squat little building painted three different shades of pink, has been both Varda’s home and her place of work since 1951, when she acquired it in a semi-derelict state with the intention of making it a studio for her early career as a photographer. It has doubled as a film set more than once. It’s also where she raised her children, and where she nursed Demy through the final stages of Aids before his death in 1990.

“A house is something alive,” Varda tells me. “Moved all the time, changed all the time. I hope that if I die, I hope not violently, but I hope to die peacefully here if I could. Because it’s like a relation with where you are, your work.” 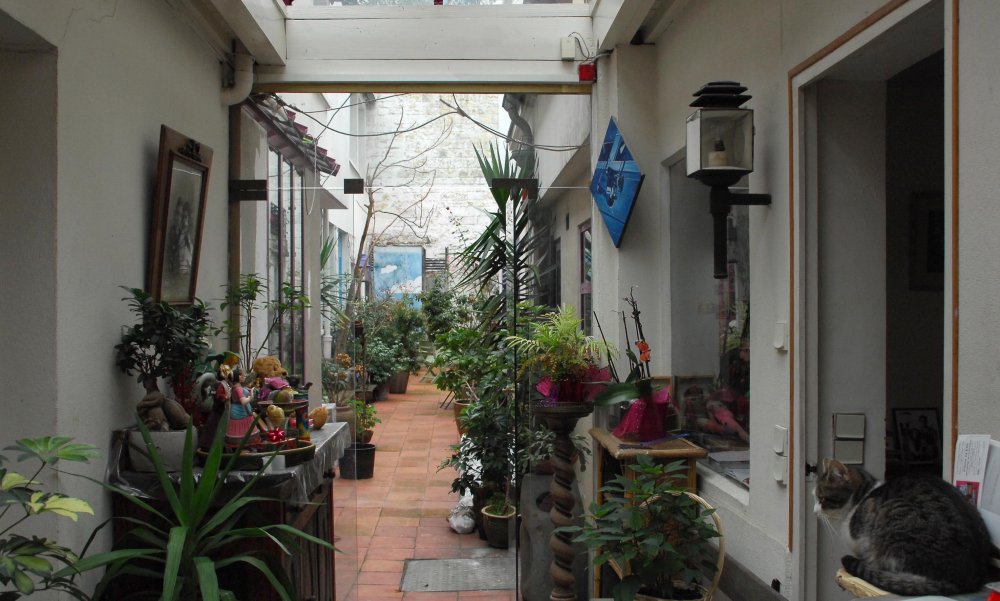 Today, cluttered with mementoes of her career and friendships with other artists and directors (I think I even spot a postcard from Jean-Luc Godard on Varda’s writing desk), the house still radiates Varda’s astonishing creative energy. The morning we meet, she has been up since the early hours working on several projects – finishing the edit on a five-part documentary about art commissioned for French TV; preparing to exhibit her own art and photography at the Cork French Film Festival alongside a retrospective of her films – and she’s fretting about whether there will be enough smoked salmon for her children and grandchildren, who are due round for lunch in a few hours.

Rue Daguerre will already be familiar to viewers of The Beaches of Agnès, where she transports the office of her production company Cine Tamaris – usually housed in an old shop unit on the other side of the street – onto a bed of sand in the road outside; or of Daguerreotypes (1975), in which Varda turns her inquisitive, compassionate, documentarist’s eye to the lives of her neighbours, who run the bars and boulangeries you can still see lining the street today.

The Ciné Tamaris office also doubles as a shop where visitors can buy DVDs of her and Demy’s films. Two or three times a day, says Varda, visitors will call at the shop – and they’re welcome to browse the collection, or even watch her at work editing. “I love being able to have the direct contact with people who are consumers. It’s like a peasant, you know, who grows tomatoes and you can come and buy the tomatoes at the farm. [Visitors] say, “Ah, it’s so wonderful to buy a DVD where it was made!” There are not these walls of trade and intermediaries.” 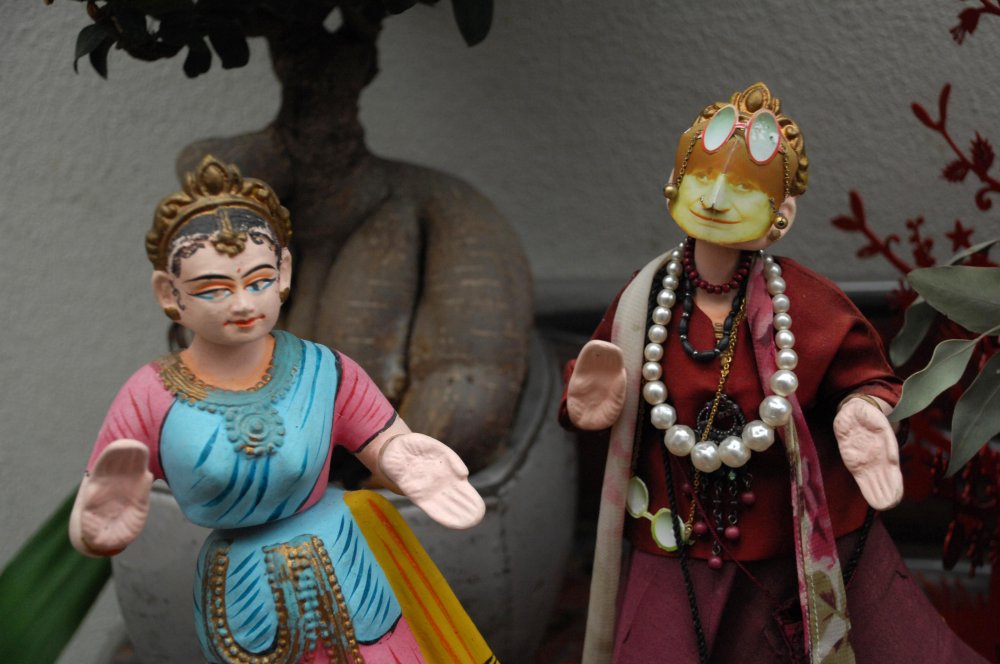 This blurring of the boundaries between art and life is absolutely crucial to Varda’s work. To watch one of her films – whether it’s a drama like One Sings, the Other Doesn’t (1977), a sprawling, feminist coming-of-age story about young women passing through the social upheavals of the late 60s, or a documentary like The Gleaners and I (2000), in which Varda films the tramps, travellers and outcasts who roam France living off other people’s waste – is to be drawn gently into an entire world. When I first came across Varda’s films, renting a few DVDs out of idle curiosity, I was surprised at how quickly and completely I and my viewing companion (a friend who has a low threshold for cinematic bullshit) were absorbed in what was on screen.

Of this aspect of her technique, Varda says: “I try to find fluidity in whatever I speak about or show. It should be like I’m taking your hand, taking you through the film. I’m not really telling a story, I’m telling you what cinema is in my life.”

The approach works to most striking effect in her semi-fictional film Jacquot de Nantes (1991), in which Varda painstakingly reconstructs the childhood of her dying husband Demy. When the young Jacques sees a dead body for the first time, Varda quickly cuts away to the real, ailing Demy; her camera creeps closely around his body, filming his skin, his eyes, the hairs on his arm. In just a few deft edits, she has telescoped through an entire lifespan, hopping between fiction and fact.

In The Gleaners, perhaps her most accomplished documentary, Varda is constantly questioning her own role in the process and how she relates to the people being filmed. She felt so strongly about it, in fact, that two years later she returned to make a ‘where-are-they-now’-style follow-up (Deux ans après, 2002) to find out what had become of the scavengers she filmed. “I felt I owed them something, but I also felt you cannot make a documentary and then say they go out of your life. It’s like being a collector of butterflies: you put them in a frame.

“The problem of documentary is very important. Because all these incredibly good important documentaries, they nail people and then they’re gone. It’s a social issue, it’s a cinema issue, it’s a style-of-film issue.” 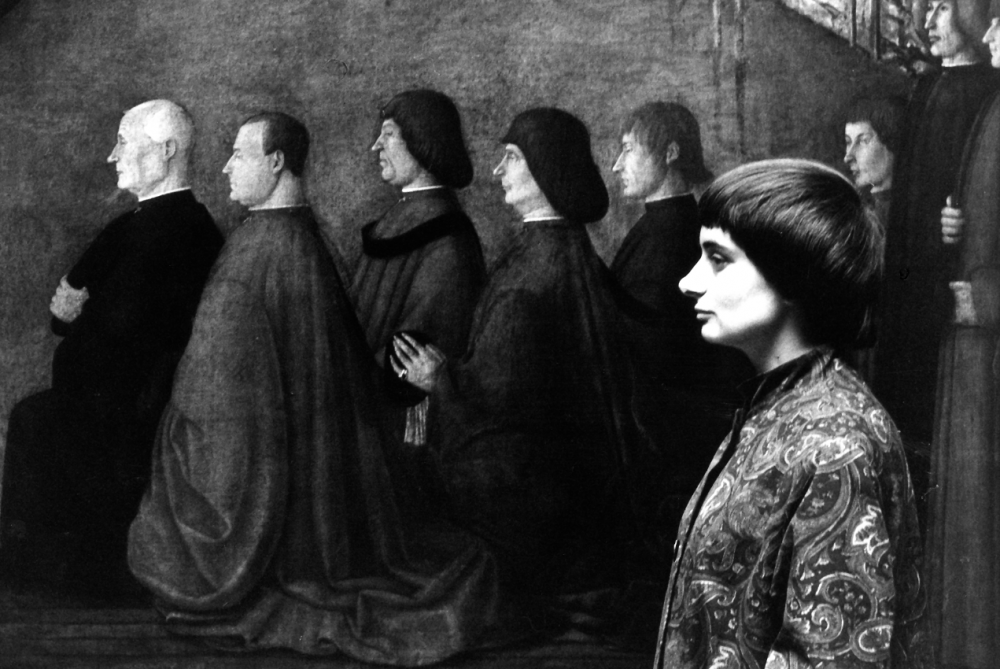 The same concerns run through her work as a gallery artist. Varda had a late blossoming here, mounting her first exhibition (at the 2003 Venice Biennale) when she was already well into her 70s. Her first work was called Patatutopia and featured three screens playing footage of misshapen potatoes in various stages of decay, accompanied by several tons of real potatoes on the gallery floor. It’s deliberately playful – for the private view, Varda greeted visitors dressed as a potato, footage of which can be seen in The Beaches – but it’s underpinned by a serious line of inquiry. “I love the idea that you have the representation and something which is true,” she explains. “In cinema it is always representation, however realistic you are.”

These ideas find their most elaborate expression in Zgougou’s Tomb (2006), a memorial to one of her cats. The ‘tomb’ is a projection of a stop-frame animation of shells and paper flowers onto an artificial mound that resembles Zgougou’s real grave on the island of Noirmoutiers, where Varda has a second home. Above is a screen which shows footage taken from increasing heights – from a crane, then a helicopter that takes in the whole outline of the island. This playing with perspective is, Varda says, “to understand that the life of my cat is little, a grain of sand,” which reminds me of Buster Keaton’s famous remark that the difference between comedy and tragedy is the difference between a close-up and a long shot.

“I think we are always on that very thin thread of equilibre, between unbearable thoughts and agreeable thoughts,” Varda says. “We’re in an incredible contradiction between the desire for happiness and the chaotic world where we are. Chaotic, cruel, violent, unfriendly. All these big issues of power and money, we have drama every day. So, how can cinema participate in that way of living?” It’s a question whose answer Varda is still enthusiastically pursuing.

For her latest project, the TV documentary, she has travelled around the world to visit artists and directors ranging from Carlos Reygadas and Manoel de Oliveira to the painters Pierre Soulages and Miquel Barceló. “All these guys, they have a world, a universe,” Varda says by way of explaining her motivation for the film. “I took two years. I love the idea that I could go and have these people express themselves, not just have fast fast news: ‘he is opening an exhibition’, bla bla, gone.” 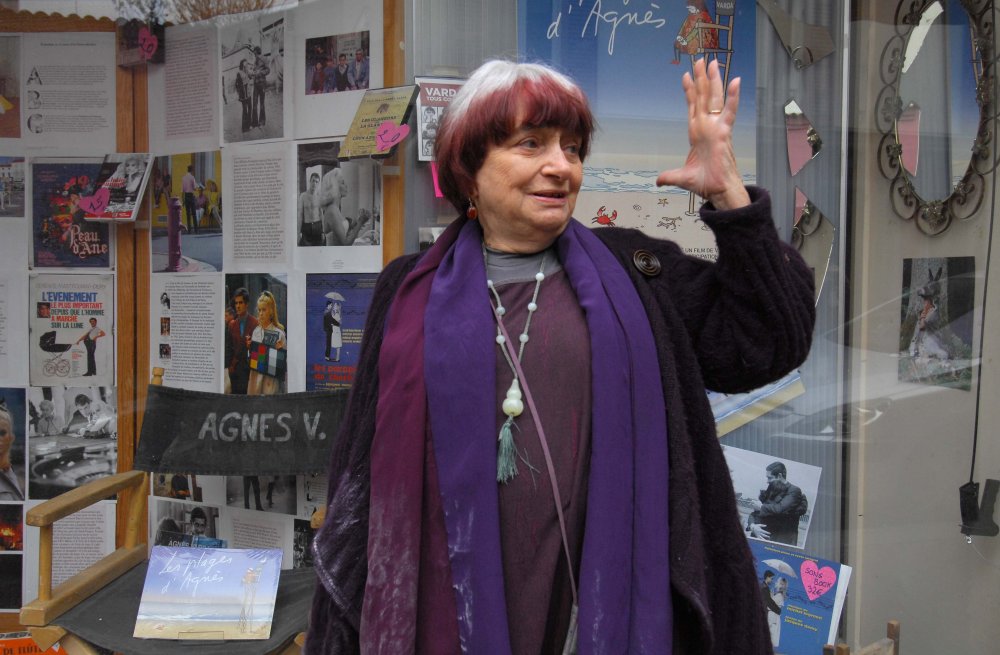 And as with so many of her films, Varda was unable to stop her attention wandering to the surrounding life of the communities she visited. “I found a woman in Mexico in a little market,” she says of her trip to visit Reygadas. “A woman not young, like 60, 65 with a pink evening dress to go to the ball. Satin pink. A lot of jewellery. She’d kept one roller in. And she was out with a broom sweeping the entrance of the market. She was so chic at 7.30 in the morning, I filmed her and took photos.

“I love what life brings you, the surprises of people. People who are original or independent or who care about others or the reasons for things, you know. This is what I find so exciting that I can’t stop. I’m alive when I travel, I’m alive when I speak with people.”

Reflecting on her career, Varda says she made “one mistake”, which was having a hit film – Vagabond (1985) – because it gave people unrealistic expectations of what would follow. “I will show you the closet of awards,” she says. “A full closet of awards. But if I want to make a film I can’t find the money. It’s incredible, they don’t trust me.” Not that this has ever dimmed her enthusiasm. “I’m proud of it in a way. Godard said to me one day: ‘la marge, c’est ca qui tient le livre’ [‘It’s the margin that holds the book together’].”

“Sometimes it gives me the feeling that justifies my ‘unsuccess’. Je tiens le livre! I think the world of cinema needs people like me. We are millions, I am not the only one. They work whether they have success or not, they work on the matter of cinema, trying to understand.”

Get our special issue

Related to At home (and away) with Agnès Varda