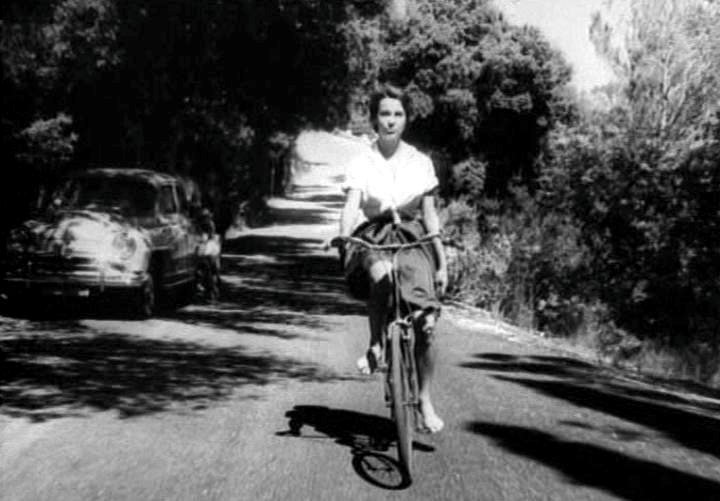 Bernadette Lafont was one of the most enduring female stars to emerge from the French New Wave. A feisty, dark-haired sensual beauty, she emerged into cinematic consciousness in François Truffaut’s first (short) film Les Mistons in 1957 when she was 19. It was also her first film, and proved momentous for both actress and director. Against the summer heat in the South of France, she plays an erotic fantasy figure for a group of young boys as she rides her bicycle, skirt billowing. The voiceover details how ‘Bernadette’ enflames the boys’ nascent sexuality while her relationship with ‘Gérard’ (Gérard Blain, Lafont’s husband at the time) provokes their jealousy.

In the wake of Les Mistons and against Blain’s wishes, Lafont, with only a little training in ballet, embarked on a film career. Although she would not work with Truffaut again until 1972, she remained close to New Wave circles, appearing memorably in Claude Chabrol’s Le Beau Serge (1959) and Les Bonnes femmes (1960).

In both films her pouting lips, curvaceous figure and impertinent wit established her persona as that of a defiant, blatantly sexual woman usually of modest origins. She thus occupied a specific niche in the New Wave female galaxy, against Jeanne Moreau and Emmanuele Riva’s cerebral heroines on the one hand and Jean Seberg and Anna Karina’s Godardian gamines on the other.

Post New Wave, there was a career eclipse (she married and had three children). She re-emerged triumphantly at the end of the 1960s, her sensual image taking a simultaneously more burlesque and more feminist slant in La Fiancée du pirate (1969). Nelly Kaplan’s controversial, surrealist-influenced classic is a milestone in French women’s cinema, a comic critique of masculinity in which Lafont’s Marie uses her sexuality as a weapon to take revenge on the men who humiliated her mother.

The film marked Lafont deeply to the point that she entitled her 1978 autobiography La Fiancée du cinéma. Convinced that she could now carry the weight of a film, Truffaut gave her the lead in Une belle fille comme moi (A Gorgeous Girl Like Me, 1975), another comedy in which a woman uses her sexuality against men, graced by Lafont’s ebullient performance. In a similar vein, also notable was Les Stances à Sophie (Sophie’s Ways, 1970), Moshé Mizrahi’s adaptation of Christiane Rochefort’s feminist novel. More misogynist but better known outside France was Jean Eustache’s libertarian ménage à trois story La Maman et la putain (The Mother and the Whore, 1973), her other signature film.

Thereafter, if Lafont no longer starred in such prominent auteur movies, she enjoyed a prolific career in art and popular film (with more than 100 such credits), television and theatre. Through the decades she appeared in important supporting roles, for instance in L’Effrontée in 1985, for which she got a César, in Chabrol’s late thrillers such as Masques (1987) and more recently in the successful rom-com Prête-moi ta main (I Do, 2006).

Lafont suffered a personal tragedy when her daughter Pauline (also an actress) died in a hiking accident in 1988. She bounced back, though; as she put it, she “did not like being an object of pity”. While her career was appropriately crowned by an Honorary César in 2003, her sunny screen presence, inimitable voice and warm personality always elicited huge sympathy.

By a nice twist of fate, one of her very last films, Paulette (2012), in which she stars as a granny growing old disgracefully, selling drugs on the side, was a major hit. Entering French cinema in some of its most revered films, she left it with a bang.