His and her ghosts: reworking La Jetée

Melissa Bradshaw talks to the collaborators behind Her Ghost, a multi-media performance piece that throws Chris Marker’s masterpiece of time-travel for a loop. 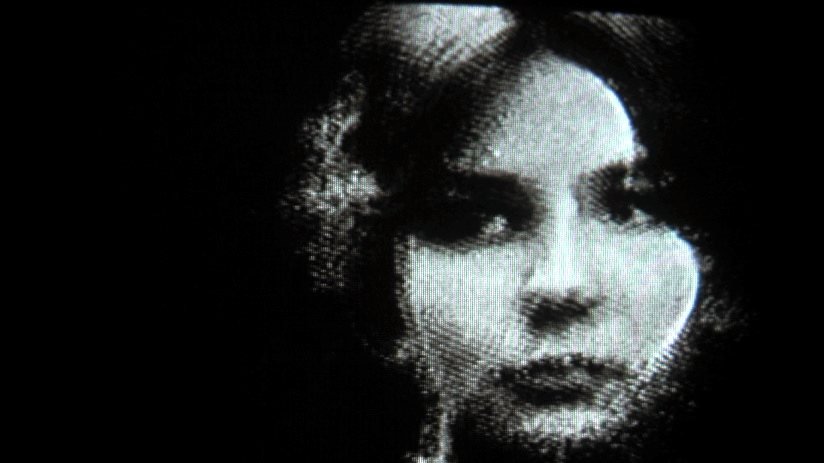 Kode9, Ms Haptic and MFO were still developing their live audio-visual rework of Chris Marker’s 1962 film essay La Jetée when Marker passed away last July. His absence intensifies the themes of their collaborative performance piece. Just as the ghostliness of the film’s female character is their structural focus, so Marker now haunts what they call Her Ghost.

The mysterious, hypnotic influence of La Jetée’s woman on the male protagonist is a crucial part of what drives his story. Obliged to travel through time after an (atomic) Third World War in order to save the human race from its own past, he encounters and repeatedly returns to her. The title of the rework comes from a line in Marker’s original script: “She calls him her ghost.” Typical to the way La Jetée plays against linear temporal logic, naming him her ghost confounds the subjective order of the film, the time-traveller becoming apparition.

Intervening in this implicit reversal is precisely the intention of Her Ghost, explains Kode9, sound engineer, DJ, producer and founder of record label Hyperdub. (Kode9 & The Spaceape’s first album was named after a book about Marker by Catherine Lupton.) “By rotating the original around the axis of gender,” he reflects, “it allowed us to view the same story while unpacking some of the film’s blind spots. For example, why is it that he is doing all the travelling? That felt at least significant, mutable, and at worst kind of clichéd.” 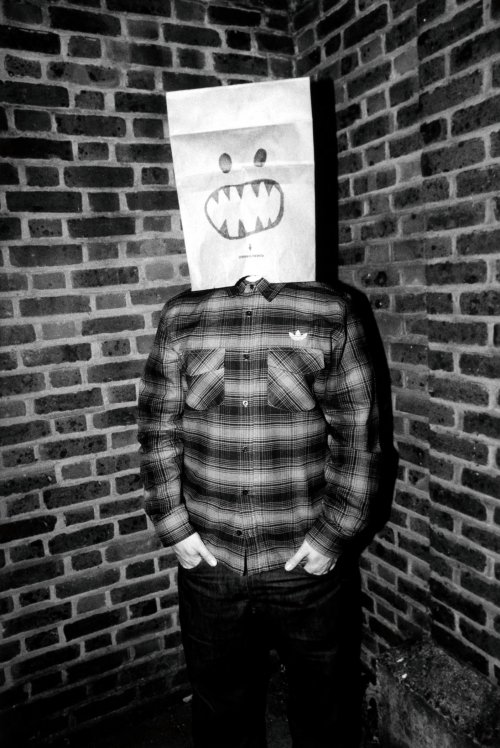 Both Kode9 and Marcel Weber (who with Lucy Bensen comprises the visual art collaboration MFO) are hazy about their own first memories of La Jetée. “I’ve watched it and got lost in its time spiral so many times that where it all began is a blur,” says Kode9. Weber says he can’t remember who sent him a link to it on the internet. “But it’s the most poetic movie I’ve ever seen.”

The performance of Her Ghost takes place in three acts, with MFO projecting visuals, Kode9 on the sound controls and researcher/lecturer/performer Ms Haptic narrating a script. All their materials are taken from the original film. This approach evolved from a commission from the Unsound festival in Krakow for Kode9 to rewrite the soundtrack.

“It became clear quite quickly that the original didn’t need a new soundtrack,” he explains. “We thought it would be more interesting to retain the voiceover and narrative emphasis, as opposed to making it just wordless audiovisual abstraction. But not a linear narrative – a cyclical, loop-based narrative, as in the original. We took the idea for the female voice over from one of Marker’s other film essays, San Soleil, and that also informed our decision to rewrite the script.”

They began to rewrite the script by email exchange and from there, explains Weber, the task for MFO was “to always find the right image to retell what we were about in the script. So the first trick was to not worry about it too much and just write the script in the beginning of our show. And the second step was to find the right image for the right scene.” Each of these images is “textured, mutated, transformed, and animated” in different ways in each of the three acts, underlining their distinct characters.

“This isn’t a sound-driven project,” Kode9 adds. He describes his role as underscoring, “like I’m throwing sounds at the screen, and watching the way they run down it like wet paint, interacting with the rhythm of the image, the silence between the words and the affective tone of the narrative.” 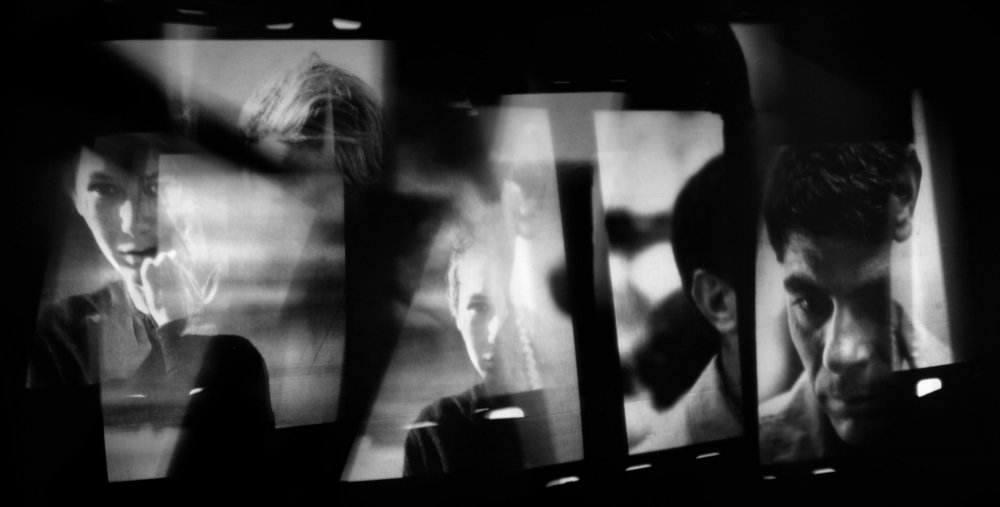 Since the perspective of the woman is reimagined from the materials of La Jetée, the performance operates like memory, constantly reiterating its own past model.

“Film is a medium of memory,” considers Weber, “to the point that people have fake memories just from images they’ve seen and at some point think this image is their memory. What’s also interesting is that I, and many people I’ve talked to, remember La Jetée like any other movie, but it’s actually told in photo images; they don’t move. So memory is based on impressions, clearly. And I think media, especially film and audio sources, are useful tools to explore it.”

For Kode9, audio loops and refrains can “help mark the protagonist’s location on the time spiral. There are glimpses of déjà entendu, a feeling of the already heard and a feeling of time anomalies created by these unravelling time loops.”

But any project reworking La Jetée must also forge its own relationship to the future. La Jetée engaged with contemporary fears about a potentially imminent atomic war, but it also projected into an imagined 50 years in the future – a date we’ve now reached.

Weber says one of the challenges, when Her Ghost was first conceived, was to make the project comparably relevant to today. “I think we’re living in a moment that is very past-related and doesn’t have so many visions for the future; I can’t name any utopian model that [seems] relevant these days,” he says. “It seems like we’re a bit at the end of imagination, and you could say our technology is based more on selfish little gadgets for people to enhance their lifestyles. There’s no collective utopia, no grasping for the stars.” He points out that La Jetée imagines the future without reference to technology: there aren’t any of the fantastic gimmicks that date much science fiction, so the love story “can be understood in a timeless way”. 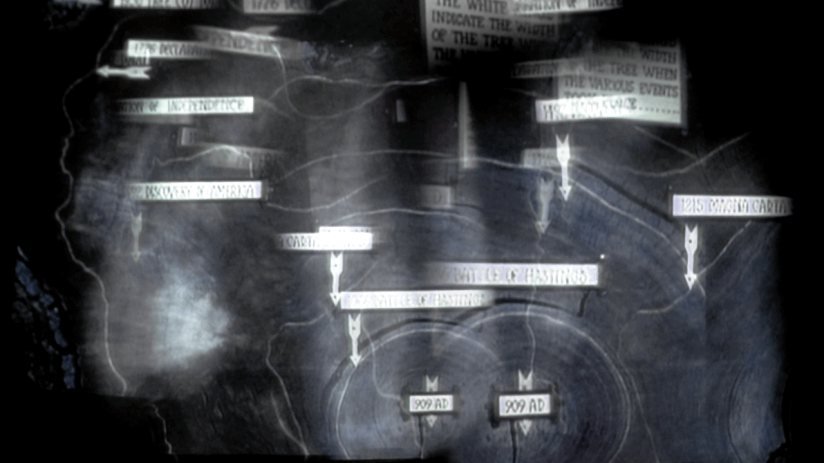 Indeed, La Jetée’s portrayal of a kind of extra-temporality, as much as its reference to atomic war, is what Kode9 finds still powerful about the film – “the idea that with no physical space left to inhabit, humanity seeks an escape through time. While physical modes persist, the real contemporary mode of the refugee is temporal, and of travel through media networks, not only geographical ones. It’s deeply prophetic.”

Yet the conclusion of La Jetée is that the man returns to his past. “According to Marker’s script,” says Kode9, “this is because there’s no way for him to escape time: he died in the past and he is compelled to repeat this. But I think it’s also an indictment of humanity’s retromaniac inability to conceive of compelling future visions.”

Earlier versions of Her Ghost were performed several times while Marker was alive. His departure serves as a reminder of how La Jetée awakens us to our own place in time – and our lack of mastery of it. Her Ghost, a work with no single author, decentralises the time-traveller’s already limited command of his own story, surely repeating the timelessness of the original.