The irrepressible Agnès Varda: S&S contributors discuss the artist and filmmaker’s influential role in the French New Wave, her visual and linguistic style, love of play and sense of place.

Plus a debrief on this year’s memorable Cannes festival, the anti-authoritarian Italian filmmaker Marco Bellocchio, Debra Granik’s Leave No Trace, Rupert Everett’s The Happy Prince, Budd Boetticher… and much more. 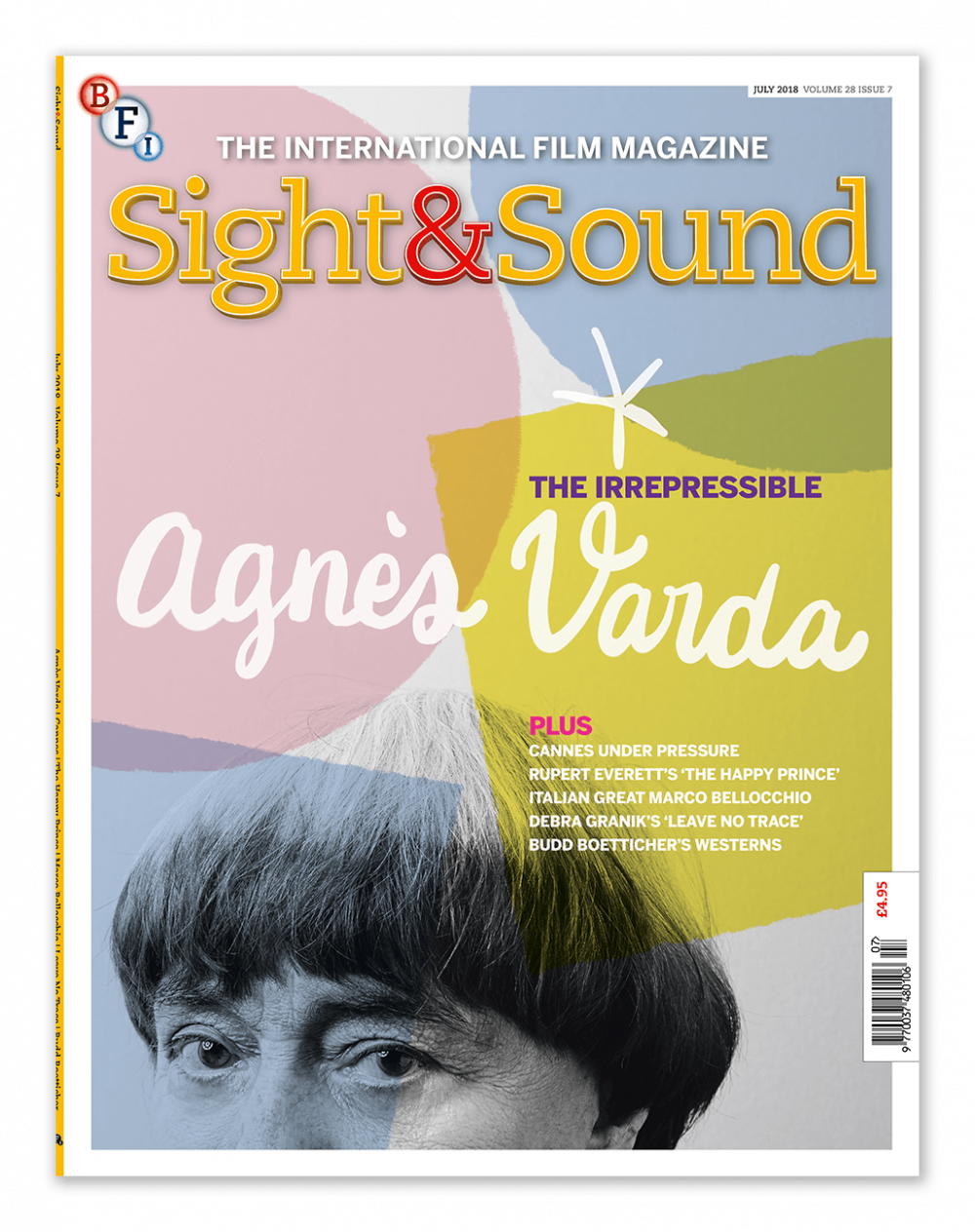 The Irrepressible Agnès Varda is on the cover this month. Working at the vanguard of world cinema for over six decades, the artist and filmmaker has been a major influence on moving-image culture, from the French New Wave to far beyond. Having just turned 90, she is finally gaining the mainstream recognition she deserves. Her earlier films prefigure many of the aesthetic, social and political concerns of the present moment, and today Varda seems as busy as ever. She was recently awarded an honorary Oscar, premiered her latest film Faces, Places at least year’s Cannes and led 82 women in protest at this year’s festival. A season of her films begins at BFI Southbank in June and an installation at the Liverpool Biennial opens the following month. In this special issue, our writers discuss the key aspects of her brilliantly idiosyncratic career.

Ginette Vincendeau writes about Varda’s unjustly overlooked role as a pioneer of post-war French cinema, combining New Wave techniques with a unique feminist gaze, and Catherine Wheatley explores the ways in which her portraits of friends, lovers, strangers and invented characters are “double-portraits”, on which her own image is superimposed. Pamela Hutchinson describes Varda’s joyfulness, and the way she cannily plays the role of, in her own words, a “plump and chatty little old lady”, while Rebecca J. Deroo explains how she has quietly woven references to histories of art, photography and film throughout her work. So Mayer celebrates Varda’s linguistic playfulnness, and Isabel Stevens outlines the filmmaker’s distinctive and varied visual style. Finally, Adam Scovell talks about the importance of place in Varda’s films.

In the wake of the Weinstein scandal, this year’s Cannes was quieter and more introspective than usual. But – as well as the protests on the red carpet – a selection of oustanding, politically-conscious Asian films from Lee Chang-dong, Bi Gan, Jia Zhangke and Palme d’Or winner Koreeda Hirokazu made the festival very memorable nonetheless, reports Nick James. “This was Cannes at its most joyous: a savvy jury responded to a programme of the highest quality with good choices,” he writes. Plus Nick Bradshaw relays the highlights from Critics Week and Director’s Fortnight, which turned 50 this year.

Marco Bellochio’s career spans more than half a century, and is steeped in Italian history and firey left-wing politics. Henry K. Miller looks back over Italian filmmaker’s ouevre, from his controversial debut, Fists in the Pocket (1965), to his late career peak, Dormant Beauty (2012), identifying a common thread: “the allure of power, even among its victims”. Miller also talks to the director about the time he spent in London, where he discovered British cinema – and began writing his first film.

Leave no Trace is the powerful third feature film from Debra Granik, the director of Winter’s Bone. The story of a teenager living off-grid in the wilds of Oregan with her military veteran father, the film taps into the pioneer spirit of the American past, as well as neorealist traditions of filmmaking. But it’s also distinctly the product of our own times, argues Ryan Gilbey, who talks to the director and finds similarities between her political filmmaking and the work of contemporaries Kelly Reichardt and So Yong Kim. All three filmmakers create “flyover cinema”: films about the neglected parts of America between the east and west coasts, which focus on female characters surviving economic hardship and homelessness.

Also in this issue: long reviews of Rupert Everett’s The Happy Prince, The Endless and Lek and the Dogs, an interview with Jonas Carpignano about his film The Ciambra, the powerful use of silence in the films of Jane Campion and Manny Farber’s (much misunderstood) termites and white elephants theory. 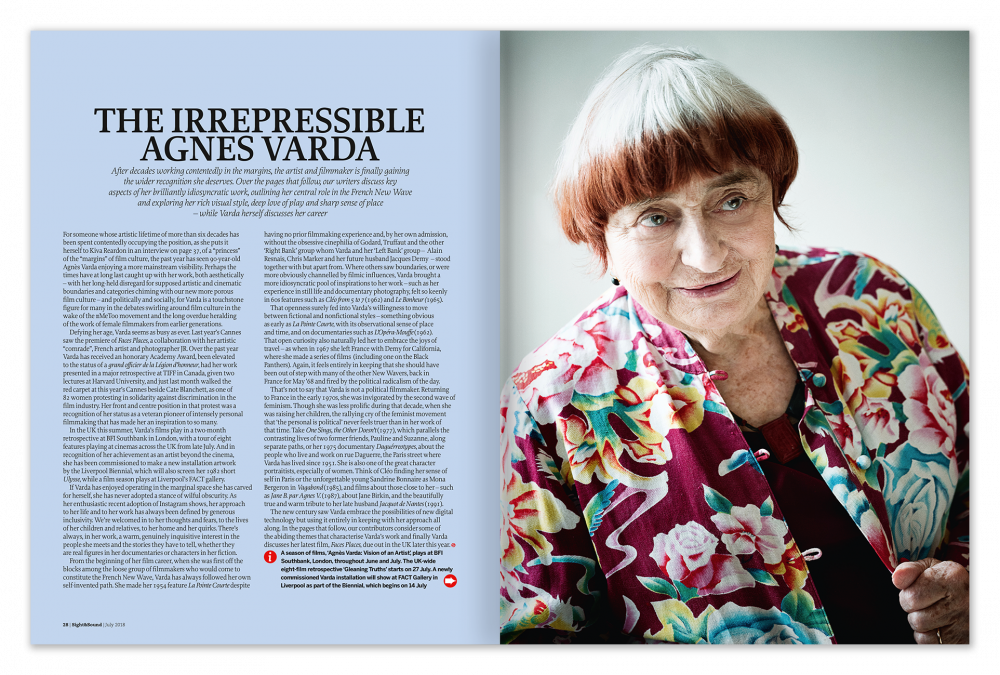 After decades working contentedly in the margins, Agnès Varda is finally gaining the recognition she deserves. Our writers discuss key aspects of her brilliantly idiosyncratic work, outlining her central role in the French New Wave and exploring her rich visual style, deep love of play and sharp sense of place. By Pamela Hutchinson, So Mayer, Adam Scovell, Isabel Stevens, Ginette Vincendeau and Catherine Wheatley. 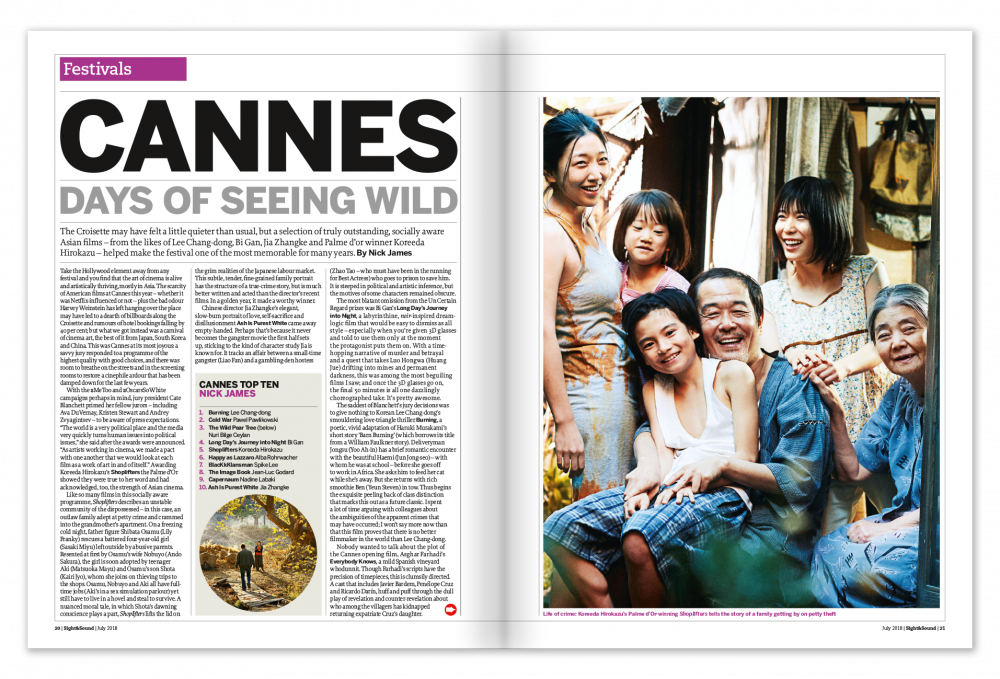 The croisette may have felt a little quieter than usual, but a selection of truly outstanding, socially aware Asian films – from the likes of Lee Chang-dong, Bi Gan, Jia Zhangke and Palme d’Or winner Koreeda Hirokazu – helped make this year’s Cannes one of the most memorable for many years. By Nick James.

Beyond the Competition, a host of treats were on offer in Critics’ Week and Directors’ Fortnight, which turned 50 in fine style this year. By Nick Bradshaw. 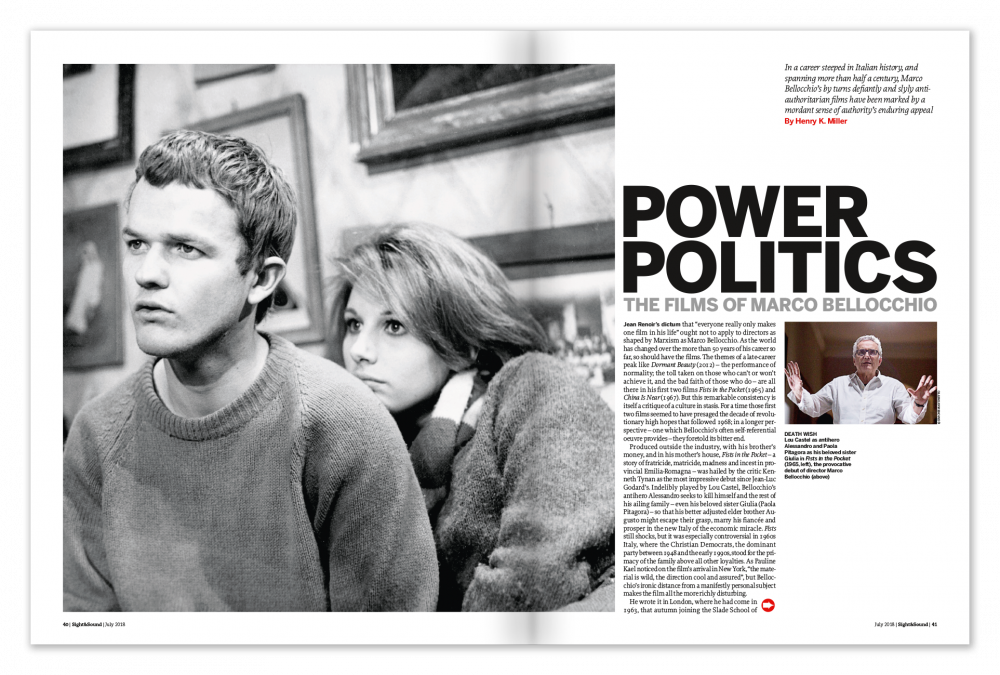 In a career steeped in Italian history and spanning more than half a century, Marco Bellochio’s by turns defiantly and slyly anti-authoritarian films have been marked by a mordant sense of authority’s enduring appeal. By Henry K. Miller.

Marco Bellochio wrote his 1965 debut Fists in the Pocket in a bedsit in Belsize Park, while studying in the Slade School of Fine Art. He talks to Henry K. Miller about his time in London. 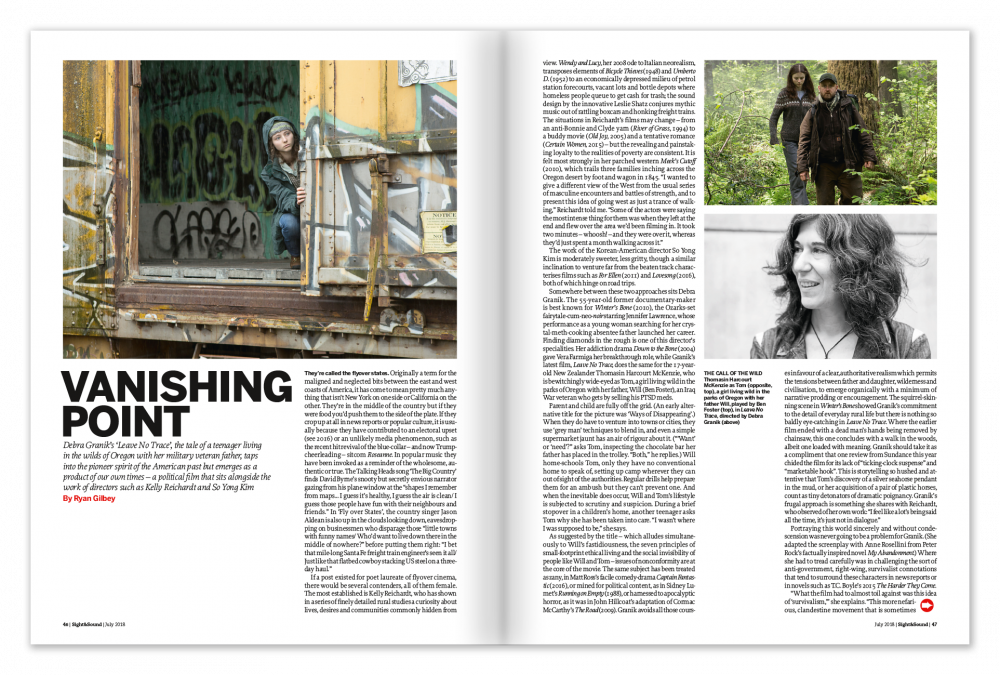 Debra Granik’s Leave No Trace, the tale of a teenager living in the wilds of Oregan with her military veteran father, taps into the pioneer spirit of the American past but emerges as a product of our own times – a political film that sits alongside the work of directors such as Kelly Reichardt and So Yong Kim. By Ryan Gilbey. 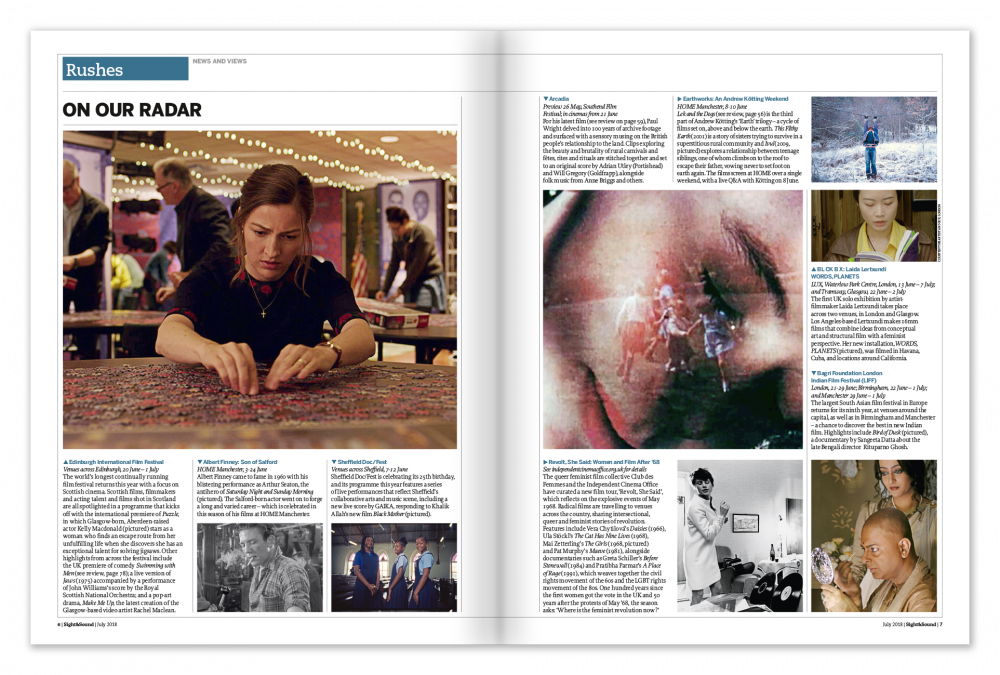 Jonas Carpignano explores the lives of Italian Romani caught between crime bosses and the police in The Ciambra. By Christina Newland.

Over the past 50 years, the traumas and triumphs faced by the people of Northern Ireland have been reflected in their moviegoing habits. By Mark Cousins.

Pack up your troubles

For half a century, through the worst years of the Northern Ireland conflict and beyond, Queen’s Film Theatre in Belfast has provided a haven for cinephiles. By Sam Manning. 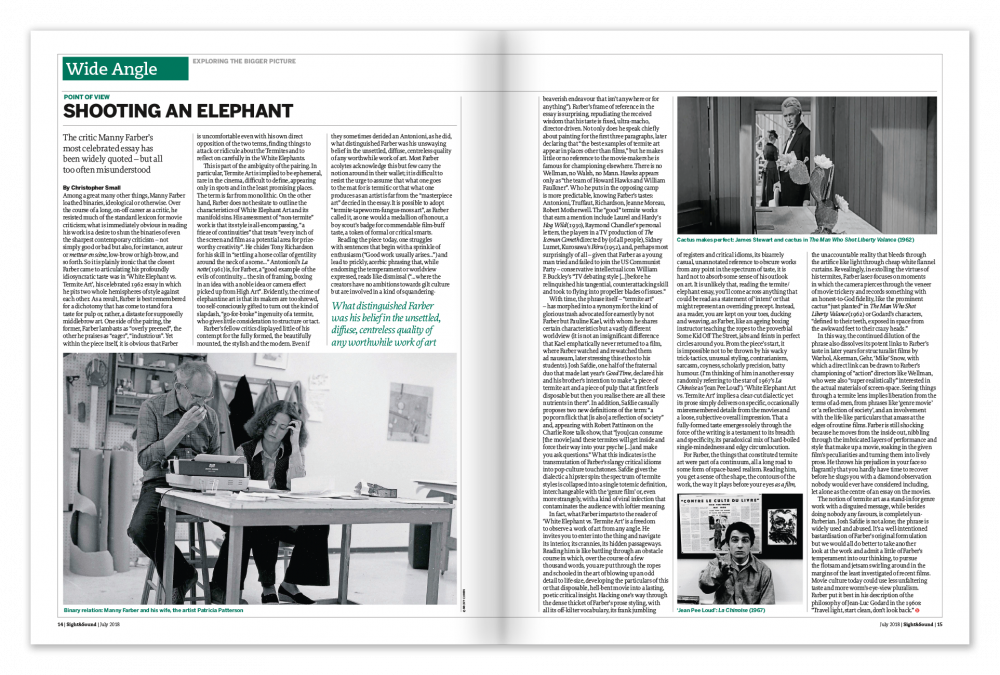 Point of view: Shooting an elephant

The critic Manny Farber’s most celebrated essay has been widely quoted – but all too often misunderstood. By Christopher Small.

Over three decades of filmmaking, Jane Campion has helped give a voice to women – often througha judicious use of silence. By Ellen Cheshire.

Peter Emmanuel Goldman made two startlingly original features before he – and the films – vanished. What have we missed?

The Endless
The Happy Prince
Lek and the Dogs 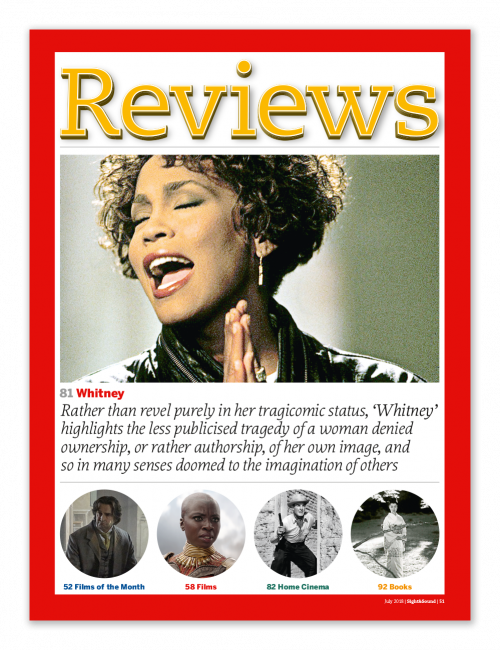 All the Wild Horses
Arcadia
Avengers: Infinity War
Boom for Real: The Late Teenage Years of Jean-Michel Basquiat
The Boy Downstairs
Breaking In
The Cambria
Deadpool 2
Freak Show
Hereditary
Ideal Home
Leave No Trace
Life of the Party
Maquia: When the Promised Flower Blooms
Mary Shelley
McQueen
Modern Life is Rubbish
102 Not Out
Path of Blood
The Poetess
Postcards from the 48%
The Rape of Recy Taylor
Ryuichi Sakamoto: Coda
Studio 54
Submergence
Super Troopers 2
Swimming with Men
Terminal
This is Congo
Time Trial
Whitney 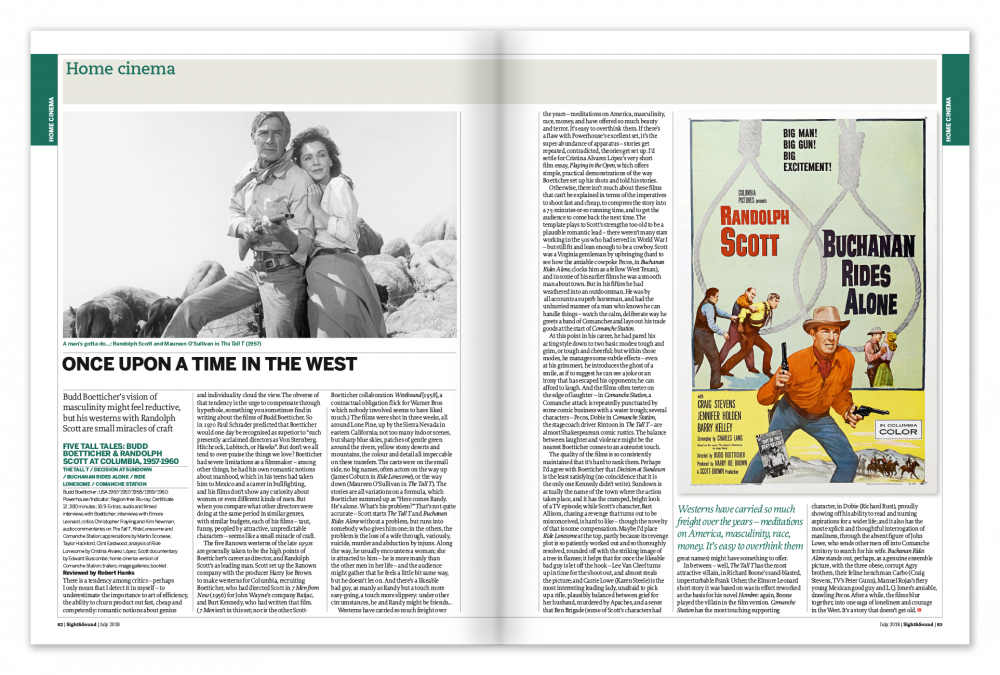 Budd Boetticher’s vision of masculinity might feel reductive, but his westerns with Randolph Scott are small miracles of craft. By Robert Hanks.

A meta of consequence: Irma Vep

Lost and found: The Fifth Horseman Is Death

An unexpected message of hope and freedom emerges from the horror in Czech director Zbynek Brynych’s exceptional Holocaust drama. By Kat Ellinger. 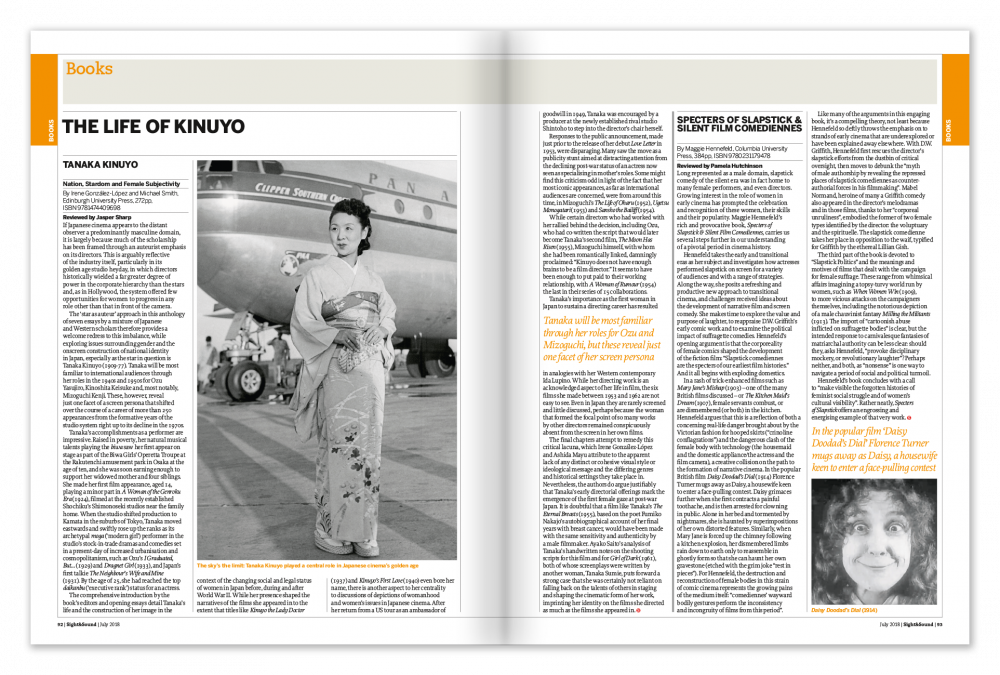 Debating the ending of Beast (and Lean on Pete)

The bloody violence that closes Michael Reeves’s visceral horror film is destined to haunt its protagonists long into the future. By Adam Scovell.