Welcome to the dollhouse: ten takes on a century of cinematic cutaways

Orson Welles compared film production to playing with a train set – but with its eerie, voyeuristic ‘cutaway’ dollhouse motif, Ari Aster’s acclaimed horror film Hereditary reminds us that the results are often more akin to spooky puppetry. We present a historical cross-section of the technique, from silent-era Hollywood onwards.

In Hereditary, a family drama more bleakly hellish than anything Ingmar Bergman ever concocted, a malign presence lurks somewhere just beyond the physical plane. It’s there from the very first shot, director Ari Aster’s camera panning through a room of model miniatures before alighting on a dollhouse in cross-section. As it creeps towards a bedroom on the first floor, we feel in our gut what’s coming – and, right on cue, in walks a man (Gabriel Byrne) to get his teenage son (Alex Wolff) out of bed. At a stroke, Hereditary’s overarching mood of dread is set, dispensing with the everyday, ‘real-world’ niceties used to set out so many horror films’ stalls. The film’s distributors, A24, knew a good thing when they saw it, making the dollhouse the star of its poster campaign and trailer.

Aster’s film centres on a family coming to terms with the loss of a secretive matriarch. Throughout, we are led to suspect an invisible hand in the events that unfold. But the dollhouse motif doubles as a meta-conceit of sorts, asking if, by peering in at this family in the throes of unspeakable grief, the audience are the real ghouls of the piece. Returning to the question, Aster deploys a range of tricks to illustrate the ways in which grief turns all that’s solid into air, from upside-down tracking shots through dark corridors to a dissolve of a teenage boy’s traumatised face into an open doorway. In another memorable shot, a funeral casket is lowered into the ground until the soil underneath is revealed.

But it’s the dollhouse shot that lingers longest, raising the question of who, or what, is doing the looking. To achieve the effect, Aster made use of a technique whose roots stretch back to the beginnings of Hollywood. Overlaying a shot from a life-sized set on to one from a dollhouse replica, the scene is a modern take on the ‘cutaway’, an interior set of adjoining rooms allowing the camera to pass, like a ghost, through walls, or pull back to reveal the full effect. It is, as we’ll see, a technique that places Aster in some fine (and unexpected) company. (With thanks to Anthony Balducci’s blog posts for researching some of these titles.)

The Hand of Peril 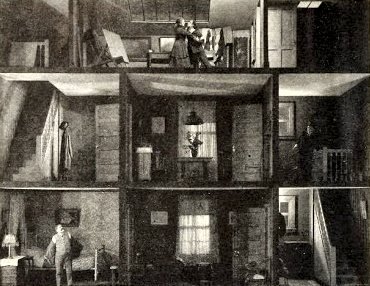 When Maurice Tourneur’s silent crime film was released in 1916, it was touted as a brave new world for narrative cinema. In depicting the action of his film simultaneously in nine separate rooms shown together in cross-section, the French émigré director could avoid traditional cross-cutting techniques used to hop between storylines – an innovation that, according to one Variety reviewer, allowed the “first four reels (to) unfold with the speed of a race horse”. Unfortunately, we’ll never get to see for ourselves: there are no copies of the film known to be in existence. 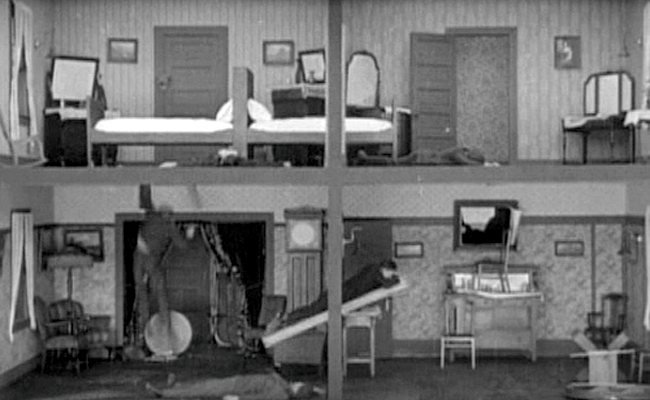 Beating Macaulay Culkin to the punch by nearly 70 years, Buster Keaton takes out a criminal gang in a house jerry-rigged with traps in this 1921 comedy short. The action, which you can see above from around the 17-minute mark, unfolds across a four-room cutaway set that cleverly exposes Keaton’s master-craftsman precision – and lends an odd, mechanistic quality to the pratfalls that reminds you why Samuel Beckett wanted so badly to work with him. In his book The Funny Parts, Anthony Balducci links the sequence to the British pantomime tradition of trapdoor stuntwork, imported to the big screen in films like Keaton’s and Doc Salomon’s Ship Ahoy (1929). 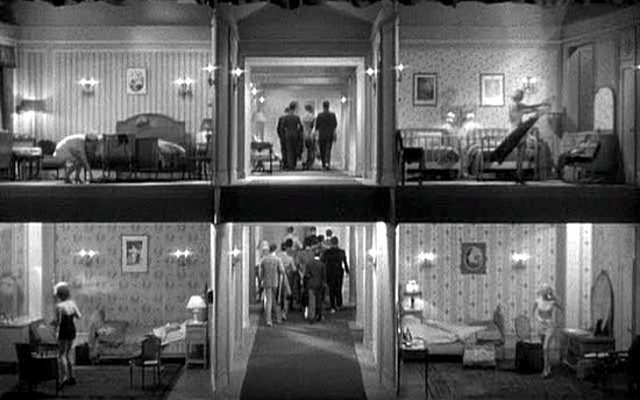 This elaborate cutaway from Busby Berkeley’s musical of 1933 was created for a musical number, Honeymoon Hotel, full of racy pre-Code winks to illicit sex. Along with Gold Diggers of 1933 and 42nd Street, Footlight Parade was part of Berkeley’s genre-defining run of musicals set behind the scenes at a theatre production company, underscoring the cutaway’s usefulness as a tool to break the fourth wall. 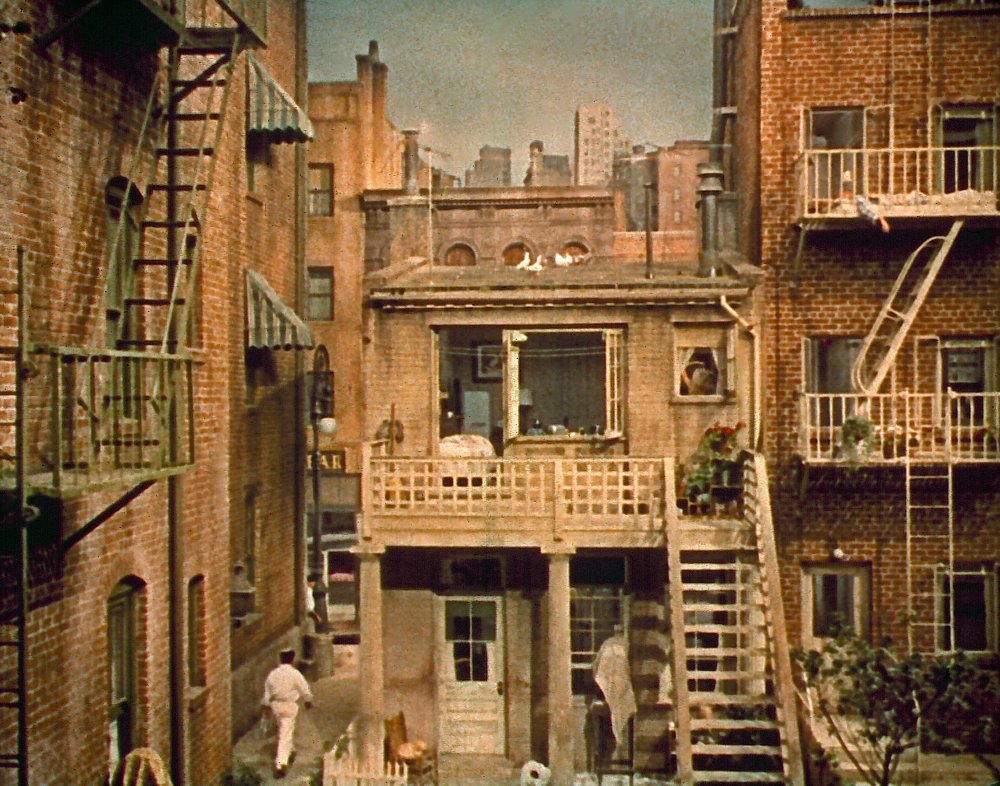 Not a cutaway per se, but the courtyard set constructed for Rear Window is effectively the star of the show, allowing Hitchcock to depict scenes unfolding in the rooms of a second-storey apartment as witnessed by the film’s protagonist, LB Jeffries (Jimmy Stewart). In the film, Jeffries’ snooping is uncovered by his neighbour, Lars Thorwald, whose bone-chilling glance towards the camera makes us complicit in his voyeurism. 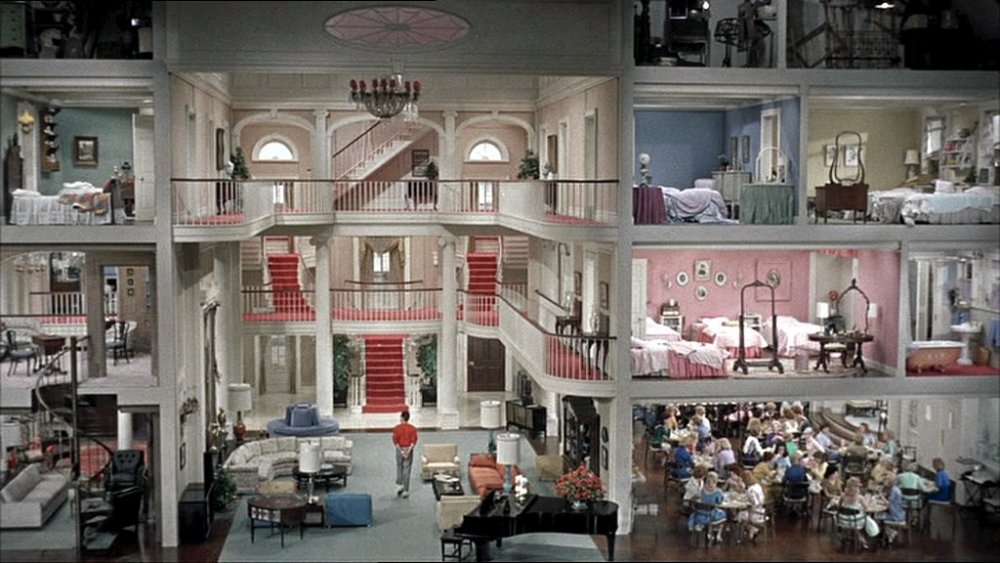 Jerry Lewis’s sorority-house set for The Ladies’ Man was 44ft by 65ft, too big for Paramount’s biggest camera crane to get in shot – so he got another one, jokingly dubbed ‘Jerry’s Toy’. Lewis directs himself in the film as Herbert H Heebert, a young man sworn off romance who, with impeccable sex-comedy logic, takes a job at a ladies’ boarding house. It’s here that Lewis’s gigantic wedding-cake set comes into its own, a literal prison of desire that New Yorker critic Richard Brody called “one of the greatest and most influential sets of all time”.

“If you use stars, people will give you money,” a voice deadpans in the opening credits of Tout va bien, Godard and Gorin’s tale of striking sausage-factory workers starring Jane Fonda. But Godard, five films into his ‘Marxist’ phase of filmmaking, was in no mood for concession, opting to lock up his star in an office for a decent chunk of the film’s runtime, while the strikers get to air their grievances at length. Particularly arresting is the use of a two-tier cutaway of the factory, conceived in homage to The Ladies’ Man, to illustrate Fonda’s character’s alienation from the workers’ struggle.

The Life Aquatic with Steve Zissou 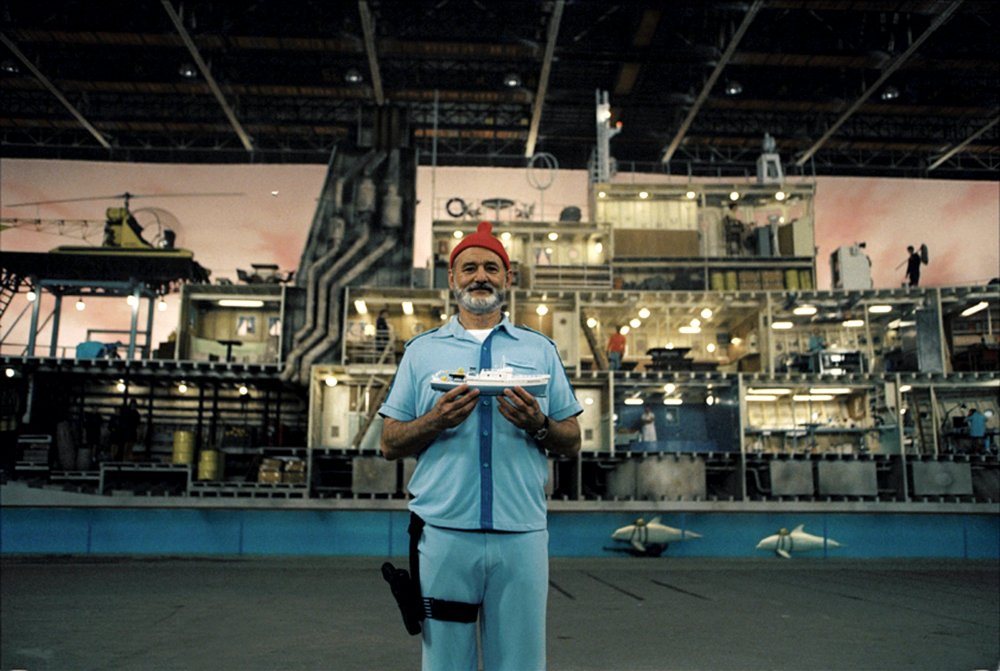 Like Noah before him, Wes Anderson got the idea to make The Life Aquatic after the image of a boat came to him in a dream. But making the boat itself wasn’t quite so easy: as Anderson’s cinematographer, Robert Yeoman, told Vulture in 2015, there was panic on set when he realised the monstrous, 150ft cutaway created for the film wouldn’t fit in shot. When moving the whole thing back ten feet failed to do the trick, he hit upon another idea: “Literally, we had to shoot the whole scene with the camera outside the stage looking through the door,” said Yeoman. Was it worth it? Absolutely: Bill Murray/Zissou’s guided tour of the Belafonte is quintessentially Wes.

Halfway into Enter the Void, Gaspar Noé’s camera does something extraordinary. Like a soul in limbo, it hovers for a moment above the dying Oscar, before taking off through the roof and soaring out through the city. What follows is, in essence, a top-down twist on the cutaway format, with ceilings instead of walls removed to achieve the desired eerie effect.

The scenes required Noé’s crew to rebuild real-world locations used elsewhere in the film as studio sets, which the director observed from a crane overhead – often distracting his cast. “In a few scenes Paz (de la Huerta, actress) would stare at the camera and I would say, ‘Hey pansy, you’re staring at the camera’ and she’d say ‘No, not the camera, I’m just thinking of Oscar,” the director told Medium in 2010. “I’m staring at his soul.’”

Blink and you’ll miss it, but Paul King’s cuddly kids’ flick features a shot that’s remarkably similar to Hereditary’s opening crawl, as a London townhouse façade opens up to reveal heartwarming scenes within. In truth, though, it’s Wes Anderson’s storybook framing and fusspot whimsy that springs most obviously to mind here – no wonder King was recently slated to direct an upcoming Willy Wonka ‘origin story’. 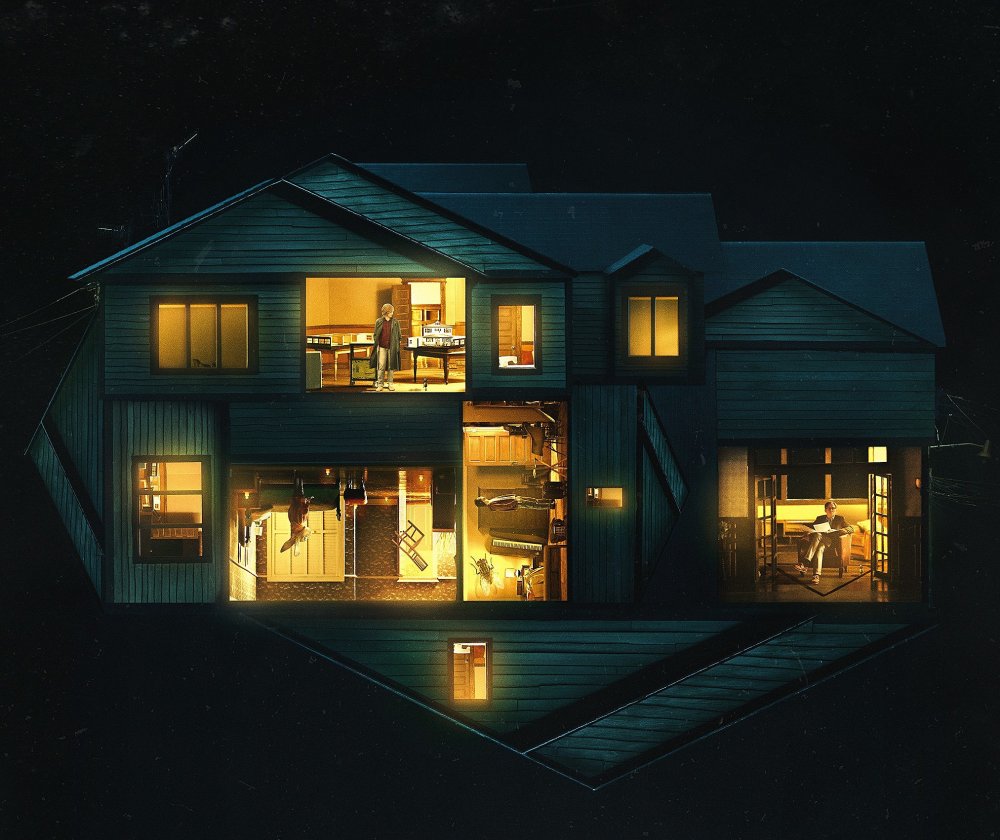 Aster said he looked to Peter Greenaway’s The Cook, The Thief, His Wife & Her Lover (1988), another film to make sinister use of cutaway sets, to help steer the tone of Hereditary. “(I)t’s just a film that feels evil to me – which is funny because with Hereditary I was telling the crew I wanted it to feel evil and I was thinking about that movie when I said that,” he said. In another recent feature, the director revealed his love of Edward Albee, whose cryptic 1964 play Tiny Alice baffled audiences with its use of a dollhouse, placed prominently onstage, which may or may not contain universes within.

Related to Welcome to the dollhouse: ten takes on a century of cinematic cutaways