It’s out there alright – in some surprising quarters… 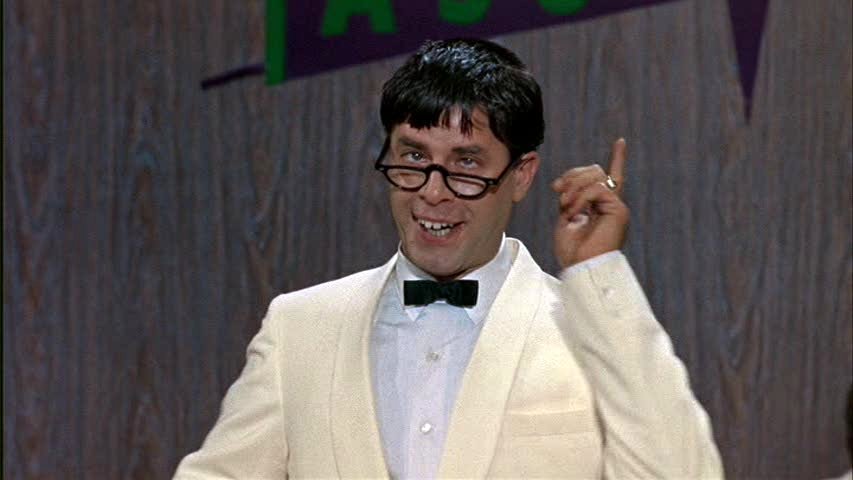 The admiration of that notorious group ‘the French’ for Jerry Lewis has been the subject of much derisive commentary, but it seems to me more interesting to consider why Americans – or at least middle-class Americans – are so dismissive of him. Lewis’ popularity with lowbrow audiences is unquestioned, and his fashionability among highbrows well known. But the contempt of those in middlebrow circles is surely significant, given that Lewis has spent much of his career relentlessly mocking middlebrow tastes.

As the titles of his amateur films from the early 50s – Come Back Little Shiksa, A Spot in the Shade, Watch on the Lime, Fairfax Avenue (a play on Billy Wilder’s Sunset Blvd.) – suggest, Lewis was poking fun at ‘respectable’ classics, frequently giving a specifically Jewish twist to this mainstream fare. Judging from the handful of clips that have emerged from these productions, they wore their marginal status as a badge of honour, their lack of production values functioning as an implicit critique of Hollywood gloss (anticipating the approach of later independent directors such as Jim McBride and John Cassavetes). Lewis even mocked the self-importance and solipsism of Hollywood’s rituals, staging his own red-carpet premieres for these shorts at his own house, and hosting award ceremonies in which he and his collaborators took home every statuette.

Lewis is so widely regarded as part of the Hollywood elite that it is worth noting how strongly opposed to it his formal, aesthetic and ideological practices are, his craving for independence as a filmmaker being the external expression of a deeper radicalism. His persona as a performer involved a rejection of restraint, dignity and good taste, and it was clearly this which endeared him to both children and revolutionaries while attracting the opprobrium of those who believed Stanley Kramer and Fred Zinnemann to be great directors, and Laurence Olivier a great actor.

Much of Lewis’ comedy involved critiquing norms of masculine behaviour. Even as late as Hardly Working (1979), he was still deconstructing the latest manifestations of Hollywood’s obsession with the controlled and disciplined masculine body, including an extended parody of John Travolta’s dancing in Saturday Night Fever (1977). His unrealised follow-up, Hardly Working Attacks Star Wars, may have gone even further in this direction, ‘attacking’ the militarist tendencies of Reaganite cinema as thoroughly as the film he actually made during this period, Smorgasbord (1982), attacked the self-assured masculinity of Schwarzenegger and Stallone. 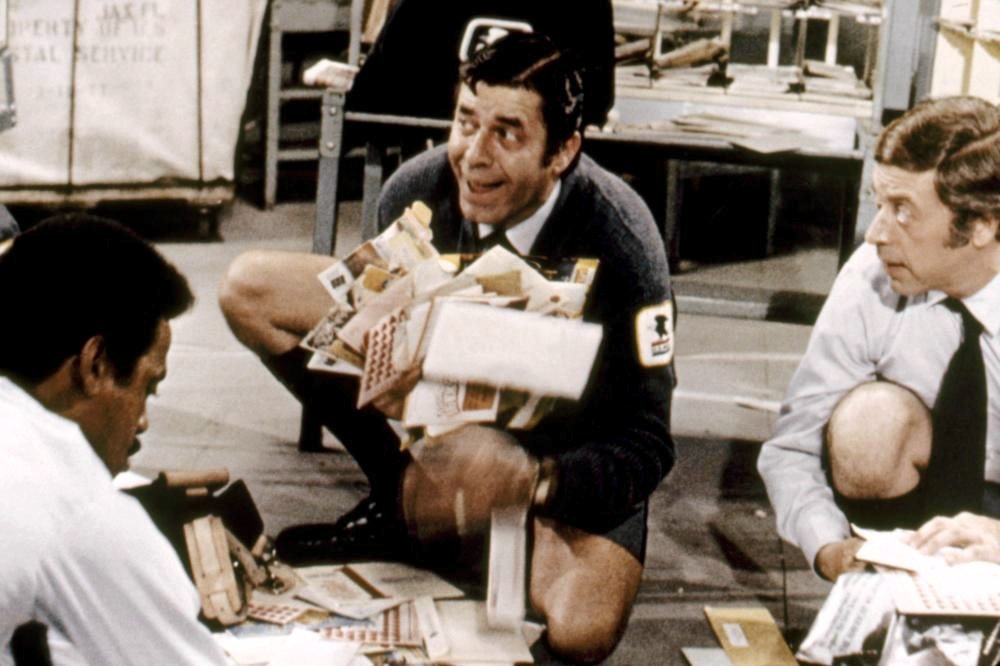 Lewis’ unmade and unreleased films have cast a surprisingly wide shadow. Mel Brooks, who worked on an early draft of The Ladies Man (1961), may well have realised the ambitions of Hardly Working Attacks Star Wars in Spaceballs (1987), while a pastiche of silent films Lewis was planning in 1968 anticipates Brooks’s Silent Movie (1976). Similarly, Lewis’ never publicly screened The Day the Clown Cried (1972) anticipates Roberto Benigni’s Life is Beautiful (1997).

But his influence is also felt in the work of several directors whose approach is not primarily comedic. Kitano Takeshi, for example, has made three films heavily influenced by Lewis – Getting Any? (1994), Takeshis’ (2005) and Glory to the Filmmaker! (2007) – all of which combine a parodic approach to masculinity with non-narrative structures, thus suggesting the extent to which traditional concepts of narrative reinforce and support traditional concepts of gender.

It is surely this revolutionary aspect of Lewis’ output that appealed to Jean-Luc Godard, who, through his various shifts in ideological position, has never faltered in his admiration. As he told Guy Flatley in 1970, “Jerry Lewis is the only American director who has made progressive films. He was much better than Chaplin and Keaton. He could have made marvellous movies, but he won’t now… because of the time in which he is living. If he had lived during the October Revolution, he might have made a magnificent movie.” Lewis’ use of his set in The Ladies Man (1961) directly influenced Tout va bien (1972), and Godard’s structures are as deformed as those of The Bellboy (1960) or The Big Mouth (1967). Like Lewis, he frequently appears onscreen as either himself or a thinly disguised version of himself, occasionally even resorting to physical slapstick, notably in Soigne ta droite (1987). 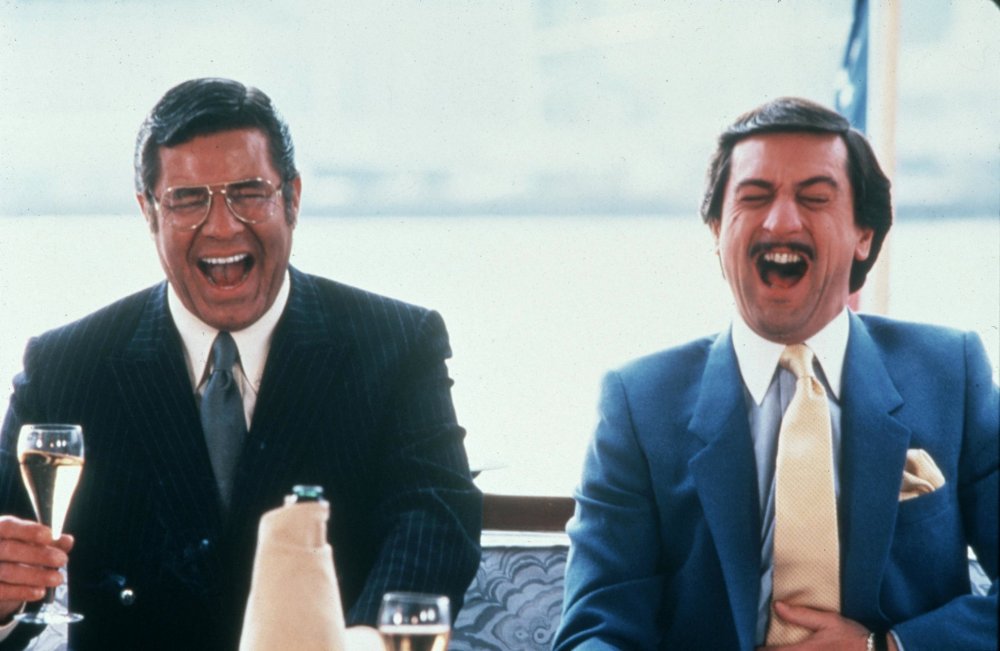 Lewis’ influence is also evident in the work of Martin Scorsese, for whom he acted in The King of Comedy (1982). The Wolf of Wall Street (2013) contains an extended sequence in which Jordan Belfort (Leonardo DiCaprio) loses control of his body after inadvertently taking an overdose of drugs, spending several minutes of screen time crawling across the ground like an infant and spouting Lewis-style gibberish. This section has been criticised in terms of distaste which strikingly echo those of Lewis’ earlier American detractors.

But if Lewis has a modern equivalent, it is Matthew Barney, an artist from a completely different background, whose work is aimed at a markedly different audience, one which usually visits art galleries rather than cinemas. Yet Barney has declared himself to be “really interested in… the tradition of physical comedy. Its relationship to gravity, and how gravity acts on the body”. Both directors share a fascination with gaudy spectacle, and use guest stars in a similar way (compare George Raft’s function in The Patsy (1964) with Norman Mailer’s in Cremaster 2 (1999)), and there is surprisingly little distance between Smorgasbord and Cremaster 3 (2002).

Lewis and Barney share several assumptions concerning identity (which is in a constant state of flux), narrative construction, and the definition of space, and often emphasise bodies (specifically those of the directors themselves) which are transformed through disguise, costume – with a frequent recourse to transvestitism – and prosthetics, as well as being subjected to a process of degradation, distortion and destruction (usually equated with transformation). By depicting the artist/creator as an athlete demonstrating his physical mastery of architectural space and an anarchist attempting to destroy it, Lewis and Barney express a radical opposition towards contemporary capitalism.