As the celebratory centrepiece of a two-month retrospective, and en route to unveiling a new commission at the Liverpool Biennale, cinema’s great impressionist regaled the audience at BFI Southbank with a demonstration of her creative leaps and bounds. 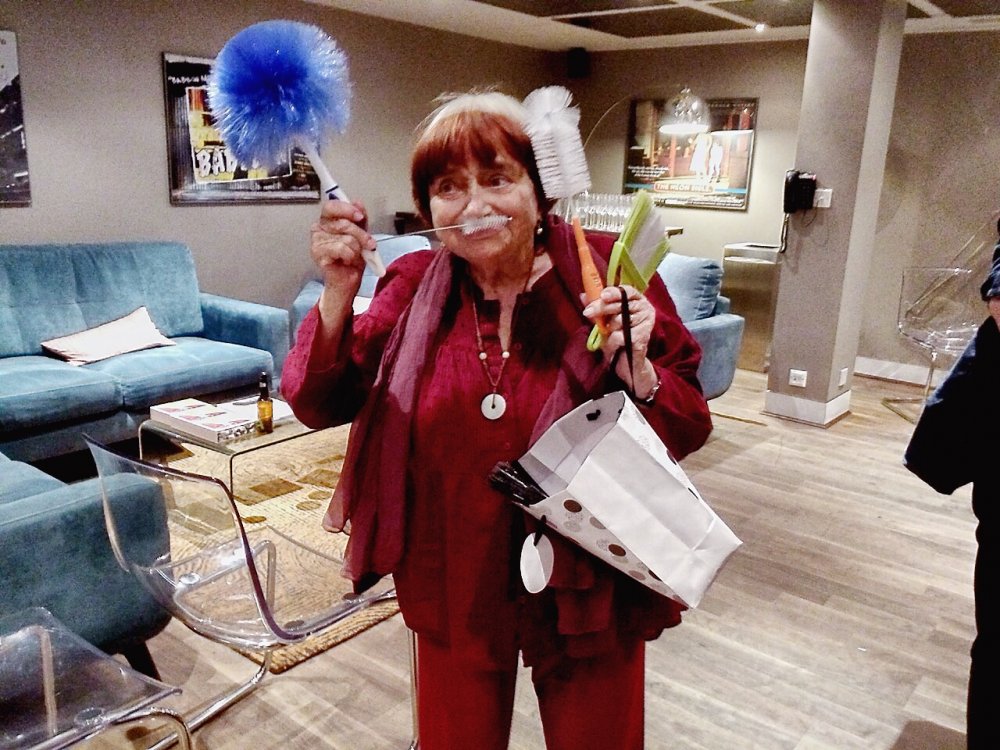 The brooms of Agnès… Varda, who turned 90 in June, with the ten balais given her at BFI Southbank to top up the commemorative 80 she receives at the end of 2008’s The Beaches of Agnès

England may have missed out on meeting France in the World Cup final, but Londoners had a world-class encounter with French cinema during the Cup’s last week, as Agnès Varda visited the BFI. In advance of the opening of her new installation for the Liverpool Biennale, she addressed her six-decade career in an illustrated Screen Talk – which ended at 8pm so the filmmaker could watch her home country France beat her birth country Belgium in the semi-final.

Moving backwards from what she described as her “third life” as a visual artist, Varda introduced her hour-long presentation by saying she “will jump from one thing to another” – and what balletic leaps they were. Music, movement and performance form an “electric thread” (her witty translation for fil éléctrique, the electric cable pulled through her front door that allowed her to film Daguerreotypes (1975) on the street where she still lives), bringing together the clips she chose to illustrate her constantly experimental yet aesthetically coherent oeuvre.

Here are the Black Panthers in armed formation, and then dancing to “Free Huey” in Oakland in 1968 (Black Panthers); here is Cléo singing a sad song, and walking away outside to watch a man eat live frogs, in Paris in 1962 (Cléo from 5 to 7); here, Pomme and Suzanne meet outside the Bobigny courtroom in 1972, as Pomme sings that no Pop or Pope will control her body (One Sings, the Other Doesn’t, 1976). Varda, who has appeared in several of her own films, is herself an extraordinary performer equal to her great stars, including Catherine Deneuve and a phonetic-French-speaking Robert de Niro in a gleefully silly clip from One Hundred and One Nights (1994), her celebration of  cinema’s centenary. Gifted with comic timing that places the audience in her hands, she lifts us with her on her joyous jumps. 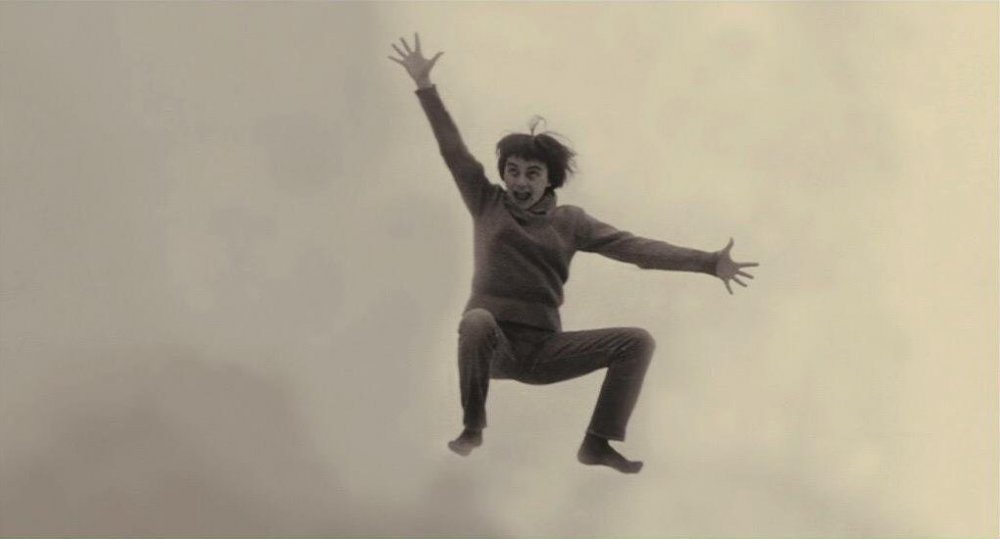 Jumps – but also (and she’s conscious of the polyvalent term) jump cuts. As per one of the closing questions from the audience, Varda is associated with the cinema of the New Wave – although, as she pointed out, “we [herself, Jacques Demy, Chris Marker and Alain Resnais] were called the Left Bank filmmakers. We lived on the Left Bank and our hearts were more on the left.”

La Pointe Courte (1954), her first feature, is seen as both precursor and jumpstart. A dual narrative in a single setting – the harbour of Sète, where Varda had spent World War II as a teenager – the film drew on her reading of William Faulkner’s novel Wild Palms and was scored, at her request, by Pierre Barbaud, an early adopter of computer composition. “Art had changed,” Varda said of the film. “Literature had changed, music had changed: cinema should be contemporary and it should be radical.”

She noted that the film predated the nouvelle vague by five years, and that she “was out on [her] own. Which was good, because [she] didn’t want to copy anything.” It remained, she said, “quite lonely” in subsequent years, as the Left Bank filmmakers didn’t pursue collective projects, “each working alone to make cinema contemporary.” 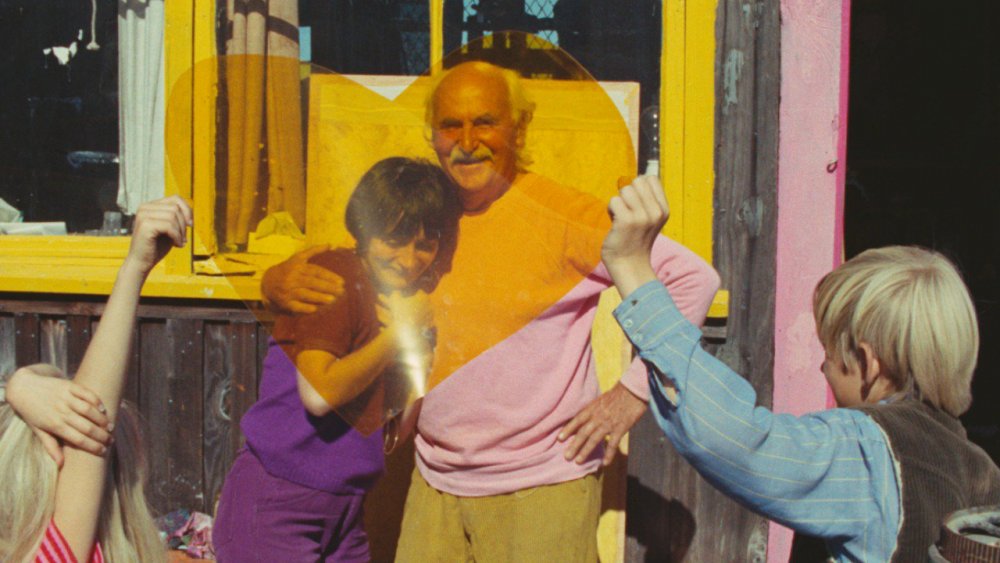 Playing across the presentation was Varda’s dual, constant commitment to formal rigour as a frame for improvisatory encounters, based on her critical sense of film’s ability to transmit affect. Her first clip exemplified this: from her short film Uncle Yanco (1968), another of her sun-kissed Los Angeles-period experiments, along with Lions Love (and Lies) (1969). The clip shows her meeting an artist she had been introduced to because he shared her surname; he turned out to be her uncle. What appears to be a spontaneous greeting is quickly revealed as a rehearsal, one of several takes in multiple languages (Varda’s father’s family is Greek) that forms a swift-paced Cubist montage finally framed behind a red celluloid heart. “Before shooting,” she noted, “I had in mind the editing. You will see that the editing is related to my emotion.”

Later in the talk, describing her shift into documentary and installation in the twenty-first century, she identified two objects that had allowed her ever more immediate access to emotion: the digital camera, which enabled her to get closer to her interlocutors (including herself) without a big crew; and heart-shaped potatoes, which led to her first installation – featuring 700 kilos of real potatoes – at the Venice Biennale in 2003 at the invitation of Hans-Ulrich Obrist. The camera led her to France’s remaining gleaners (for 2000’s The Gleaners and I) – a trace of the nineteenth century in the twenty-first – and “one gleaner showed me a heart-shaped potato, and I thought: we should film with love, with care for these people in a bad situation, living with courage.” Storing the potatoes at home, she observed them as they aged, noting “I was impressed by the beauty of what grew out of them.” 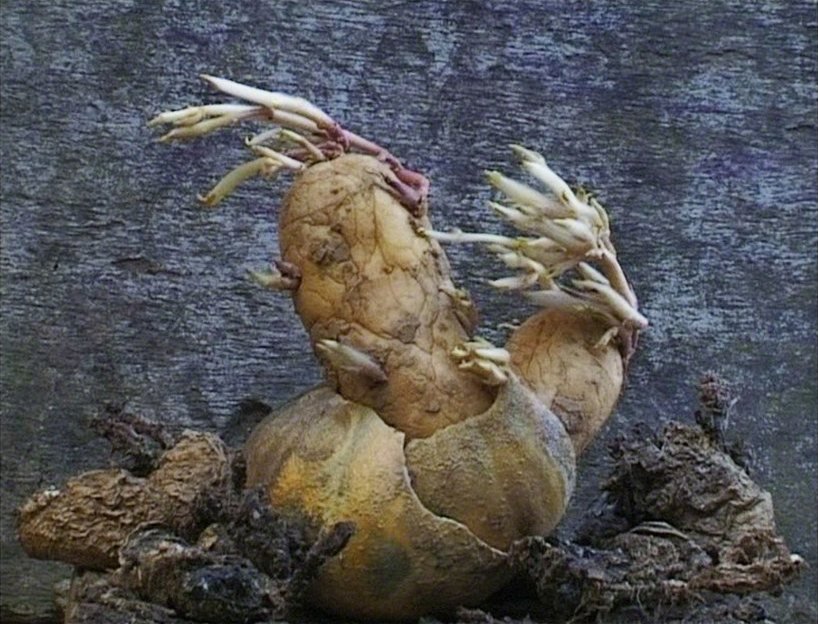 Impressed is a key word for Varda: her talk is replete with impassioned impressions, as she revivifies Impressionism by recalling, in her descriptions, that it was about subjective impressions, about being struck, moved. In particular, she is “impressed” by bodies and how they navigate the material world. “Impressed” by the amount of waste in potato fields – but also “impressed” by the “typical gestures” of the shopkeepers in her neighbourhood, and by the Black Panthers and their “body and mind” philosophy that went unreported in white-dominated media: “I was impressed by their energy, their decision to be important.”

She noted that her work is centrally concerned with how such impressions are transmitted from filmmaker to audience through radical formal strategies: “I’ve been always trying to work on perception in what I do – what can we do to open the spirit and mind of people watching so they can keep the feeling?” 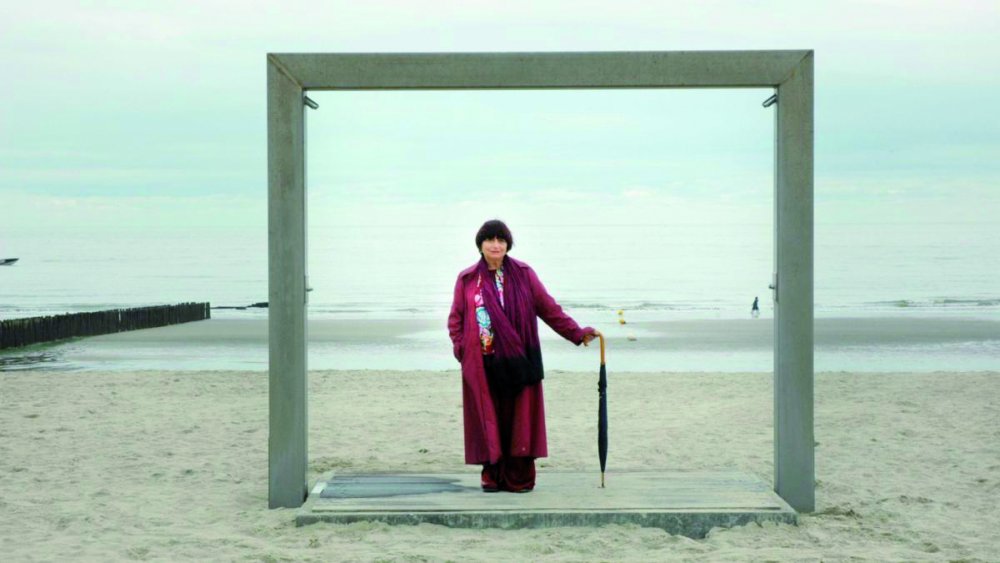 Shifting from single-screen shorts and features to triptychs and polyptychs such as Widows of Noirmouiter has extended her thinking about perception and engagement. Speaking after a screening of 2008’s The Beaches of Agnès (which includes footage of Widows) at the BFI the following night, she described her practice with these polyptychs as creating a clearing in the forest with many paths leading out through the trees. The complex multi-film works have been joined by large-scale projections that centre a large black-and-white still image between two moving colour images, as in her recent work Alice and the Cows, creating an optical illusion of slowness that is almost stillness.

Time – and movement in time – has always been one of Varda’s key themes, from the real-time flânerie of Cléo onwards; during the Screen Talk, Varda narrated her strict attention to each of Cléo’s steps as she leaves her apartment building and takes to the street, as she “stops looking at herself and starts to look at others.” If, for Jean-Luc Godard, “travelling shots were ethical issues,” then for Varda, each choice has its own ethics of attention, including the 13 famous travelling shots in Vagabond (1985), which make the film ‘walk’ like its protagonist, and emphasis Joanna Bruzdowicz’s score, heard only during those 13 shots.

Vagabond, like Gleaners and her most recent film Faces Places (Visages Villages, 2017), makes an ethical decision in their focus on marginalised figures. “In a world where we are attacked by the faces of actors, of women selling cosmetics,” she said of the latter, “it was nice to show ordinary people, and they would accept that their faces, too, could be big on the wall.”

This discussion followed on from showing her first self-portrait, a photograph made in Venice in 1962, in which the artist with her recognisable bowl-cut hair aligns her profile with those of a group of gentlemen sporting similar severe haircuts, who are kneeling to witness a fragment of the True Cross. In the self-portrait, Varda is slightly larger than the painted men, among them and slightly to their fore. At the BFI, she showed an image of the original painting, which reveals that the kneeling group is a small detail in the far foreground of a vast canvas. “It’s a good image,” she said, “about how an artist feels: small and modest, but also a person who can stand for her own choice.”

That’s exactly what she did in recounting her interwoven life and career, including her participation in protests for “the right to self-control of birth” (another witty linguistic turn) that inspired her pro-choice film One Sings, the Other Doesn’t (just re-released in France, and touring the UK this summer as part of Revolt, She Said), and her movement from still photography to film. “I was impressed by what an image can carry. Photographs of reality always include something else” – chance, she implied – but in film she felt she could use a diversity of means (sound and movement, in particular) to show “the contradiction of a private life, private feeling, and what we know about the world.” Her attention to the complexity of that piercing contradiction might match up with her statement that “because I am a woman, I have approached subjects from my condition.” 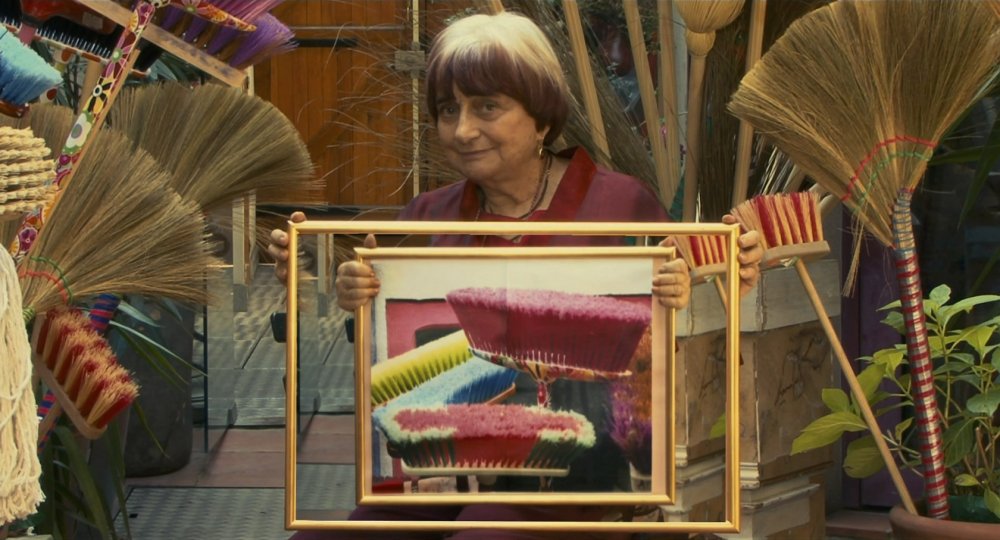 “I wanted to invent cinema,” she concluded, “and be happy to be a woman. I wanted to be a radical. I wanted to find shapes.” Talking about the shape of the beached whale in which she reclines (“like Jonah”) in The Beaches of Agnès, she explained the following night that the whale had a deep connection to her studies with Gaston Bachelard, and perhaps to the idea of a child not wishing to leave the womb. It was, she explained, a daydream made real, a space of repose and contemplation – an apt description of her cinema, as of her conversation. England may have lost on Wednesday night, but those of us lucky enough to be at the BFI left feeling the beach beneath the Southbank’s concrete.

“Sometimes,” Varda told the audience giving her a standing ovation on Tuesday, “I feel the success I have is when I meet people in the streets and instead of Bravo, they say Thank you.” Ten brooms, given in recognition of the tenth anniversary of The Beaches of Agnès (which ends with the filmmaker receiving 80 brooms for her 80th birthday – balais, brooms, is French slang for years-old) were too few thanks for this most generous of all filmmakers. She has always filmed with love, with care, and is finally receiving from audiences, critics and institutions the love and care her films have always richly deserved.