Documentary of the week: Maidan

Sergei Loznitsa’s epic yet intimate canvas of Kiev’s 2013-14 Maidan protests brings out the multifariousness of our lives together, as well as the mess and the beauty of this particular crisis. 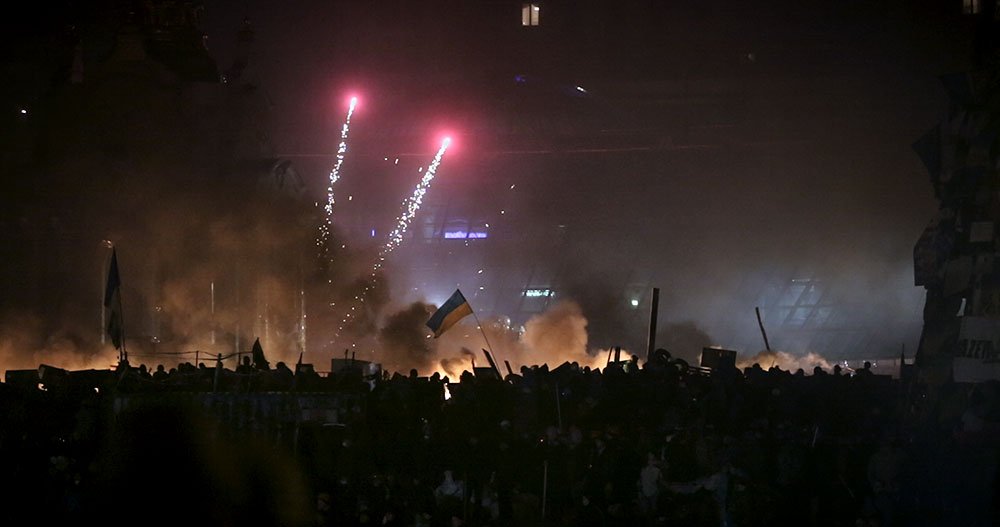 It was a relatively inconsequential but striking detail of the protests, vigils and violence that occurred in Kiev’s Independence Square in the winter of 2013 that the news footage broadcast from the scene tended to be so eerily beautiful. Billows of smoke and steam, frosted trees and huddled, shifting crowds, all weirdly illuminated through smatterings of snow by floodlights and fires and camera flashes – the whole setting had a glamour to it that was seductive but also off-putting because its seductiveness seemed inappropriate. It was too pretty, too theatrical, as if it was being played out on a gallery wall.

Sergei Loznitsa’s chronicle of the events that transpired in the square between November 2013 and February 2014 catches and holds this unnerving gorgeousness in a succession of long master shots, almost entirely from fixed positions, which frequently resemble painted canvases: not only heraldic and celebratory images of flag-festooned rallies and battlefields but also smokier, stranger, more abstract evocations of massed people and conflicts and, less predictably perhaps, cheerfully teeming market scenes like those of Bruegel the Elder. One of this film’s many intriguing aspects is the emphasis it places on the continuation of ordinary, busy, trivial life in the midst of a crisis – as well as the adrenalised, carnival atmosphere that can accompany one. Independence Square (in Ukrainian it’s called Maidan Nezalezhnosti, but the single word Maidan became shorthand for the anti-government protest movement) holds, in these shots, not only impassioned protesters but passers-by taking selfies, volunteers preparing and distributing food, people laughing, organising, arguing, making phone calls. 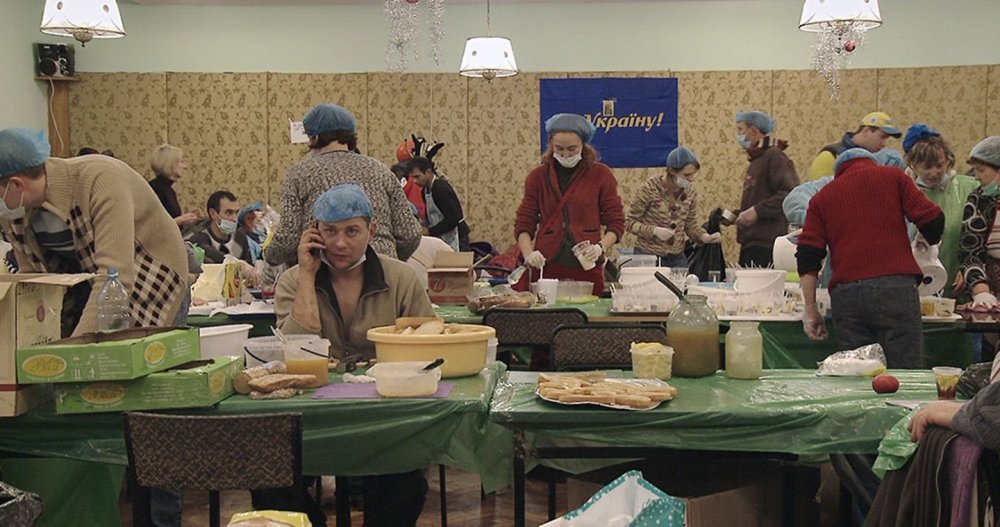 The detail – as in a canvas by Bruegel, or his predecessor Hieronymus Bosch – is funny and poignant and grossly human. In one sequence, a worker preparing sandwiches is caught with his sterile gloves off, making a mobile phone call; we see his supervisor gently admonish him and confiscate his phone as he protests, eyes pained and wide above his hygienic mask. Later, when matters between police and protesters have turned bloody, a line of people are seen matter of factly amassing piles of bricks as ammunition; in the midst of this labour, two women fall into a fierce, finger-jabbing argument.

We can’t hear what they’re saying to each other, since this minor bustle, like the rest of the film, is presented without voiceover, soundtracked with the amplified declamations from the stage – song, speechmaking, bluster and bits of housekeeping in the first phase of the protests; instructions on crowd movement and medical treatment once bullets, tear gas and water cannon have come into play later on. But what’s emphasised by the inclusion of such characterful footnotes is the number of levels on which we live: as microscopic, anonymous elements of vast historical narratives; as members of symbolic constructs such as nations, resistance movements and ‘sides’ of a conflict; as private individuals moving through our own entirely subjective and enclosed dramas; and as social creatures in continual physical and emotional negotiation with others.

By depicting these various conditions of existence in parallel, Loznitsa’s film is also able to inhabit several diverse functions simultaneously. It is a dispassionate, close-range journalistic account of a succession of events, but also a delicate, even whimsical portrait of small-scale human interactions; it’s a document of specific incidents, but also a timeless evocation of human reactions, both large and small, to crisis conditions. Among the speakers who address the crowds are poets whose material favours blood-and-sand bombast – “We shall overcome the old regime as heaven overcomes hell… Our long-suffering motherland: for her we live, for her we die.” The far more subtle and affecting poetry in the film is to be found in its quietly busy corners. 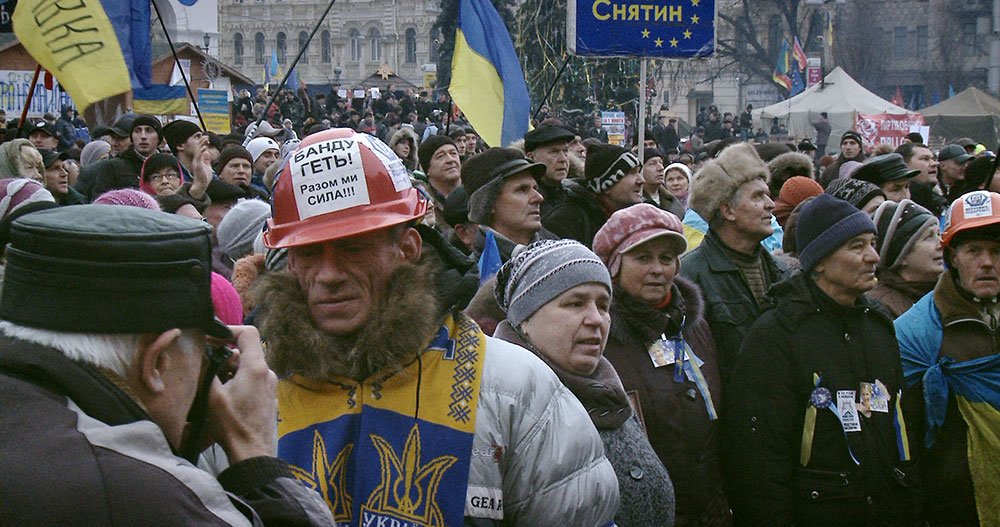 Loznitsa, with cinematographers Serhiy Stefan Stetsenko and Mykhailo Yelchev, positions the camera at the periphery of the square for the most part, sometimes filming the stage directly, sometimes concentrating on the wider mass of spectators and at one point observing people watching the protests on a large screen. The camera moves only when it finds itself in an area under fire with tear gas; thereafter, its positioning appears to shift to an upstairs window, looking down on the smoky commotion. Very occasional intertitles provide information on the wider political context affecting the Maidan activity, and for the most part the people passing the camera do not acknowledge or interact with it, though at one stage a busker plays it the Ukrainian national anthem.

Films composed with this degree of formal rigour often seem to present a deliberate challenge to their viewers’ fortitude. Maidan, however, is never dull; too rich is what it shows us, too troubling and fascinating the contrasts between the hyperbole from the stage, the individual reactions visible within the crowd and the invisible machinations of wider world politics that we know to be encroaching from the outside. The languid pacing of the shots emphasises the slow progress of events, and allows time for the viewer to absorb the odd shifts in atmosphere and the ongoing sense of uncertainty that accompanies them. And that troubling beauty never lets up. 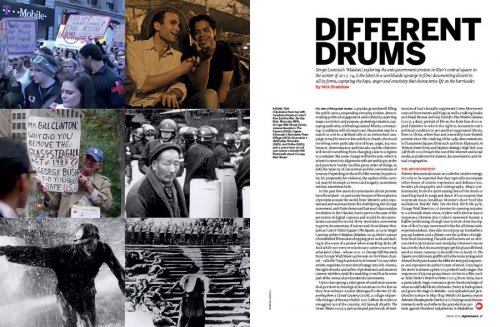 Related to Documentary of the week: Maidan