The cinema of the Palestinian revolution

Reflections on a recent programme of international film art from the era of Palestinian armed resistance. 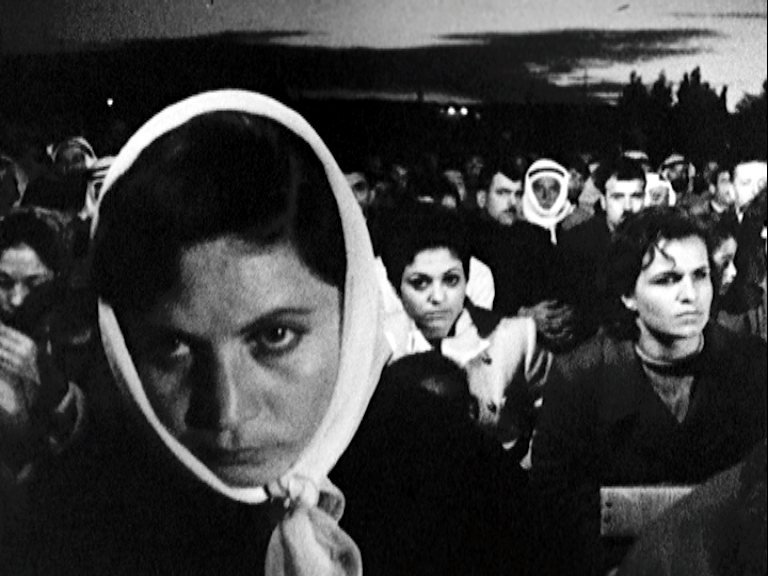 “In the struggle against the state of affairs, criticism is no passion of the head, it is the head of passion. It is not a lancet, it is a weapon. Yet the weapon of criticism cannot, of course, replace criticism by weapons.”

The fate of their struggle notwithstanding, the history of Palestinians will most probably be, and as a matter of fact already is, subjected to the kind of violent manipulation reserved to the oppressed, the wretched of the earth, the defeated. In order to delegitimise what is ratified by international law, repressive forces need to reinvent (hi)stories, engineer toxic narratives to feed to gullible readers and passive spectators eager to see ‘good’ triumphing over ‘evil’. Mass-mediated propaganda works miracles: ethnic cleansing can be made to look like self-defence, apartheid like a just necessity and resistance denounced as terrorism. The oppressed always face a twofold injustice simultaneously aimed at their present and past; their history is distorted and their right to self-expression effectively taken away.

The Palestine Poster Project Archives are hosted at palestineposterproject.org.

That is why the struggle for self-determination is always one for self-representation too. Edward Said warned against those separations through which “culture is exonerated from any entanglement with power, representations are considered only as apolitical images to be parsed and construed as so many grammars of exchange, and the divorce of the present from the past is assumed to be complete.” A recent programme organised by the Palestine Film Foundation in London exhumed rare films (and posters) from the Palestinian revolution of the 70s and with them the historical, political and cultural dimension that framed it, without which no critical understanding of the Palestinian armed resistance can be possible.

A first, quick perusal at the various nationalities of the films screened reveals the internationalist nature of a conflict too often described (and conducted) on ethnic-religious and nationalist grounds. From Serbia to the USA, Italy to Russia, Lebanon to Japan came the directors, newsreel collectives and TV crews that converged on the deterritorialised battlefield of the Palestinian resistance to produce counter-information, militant bulletins and empathic complicities.

Contradictory peculiarities and territorial specificities notwithstanding, the Palestinian armed struggle these films and documentaries depict emerged within the global continuum of anti-imperialism whose front was then stretching from Africa to Asia, Latin America to the Middle East. Sometimes successful (cf Vietnam, Cuba, Angola…) as well as historically justified, the right to armed self-determination and egalitarian coexistence was asserted by Palestinians in the wake of the Six-Day War of 1967, after Nasser’s attempt to pan-Arabic solidarity was crushed by Israeli tanks. 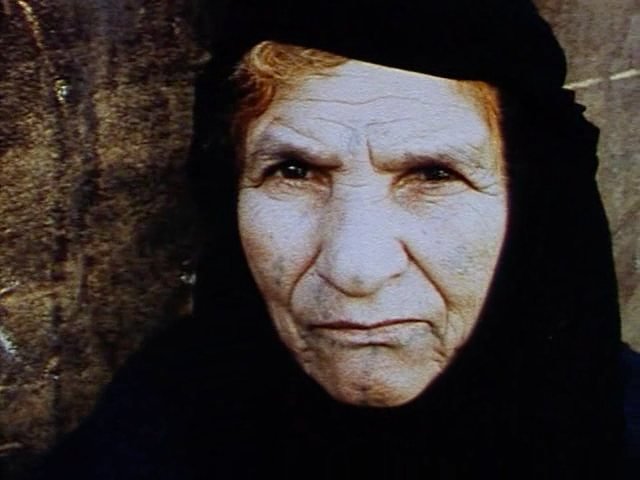 The Dutch documentary master Johan van der Keuken provides a sobering account of the conflict in his The Palestinians (De Palestijnen, 1975). Starting from the theoretical legitimacy of the Zionist project, its colonial implementation and, most crucially, economically opportunistic backing, the director delivers a nuanced account of the complexities surrounding the ‘Palestinian issue’, touching most vitally on the global interests and fluxes of oil, in whose name one people is displaced and persecuted while another is hypocritically ‘defended’.

As journalists too often avoid doing, Van der Keuken investigates the political and economic forces that at once shape a conflict, justify its injustices and ultimately warp its public perception. While righteously defending the idea of a Jewish state, a necessary retreat from the violence of European anti-semitism, the documentary carefully highlights its mercenary implications and the vile distortion of the Palestinian cause whose goal was and is not the annihilation of Jews (the latter being a primarily western Christian prerogative) but peaceful cohabitation on equal basis. 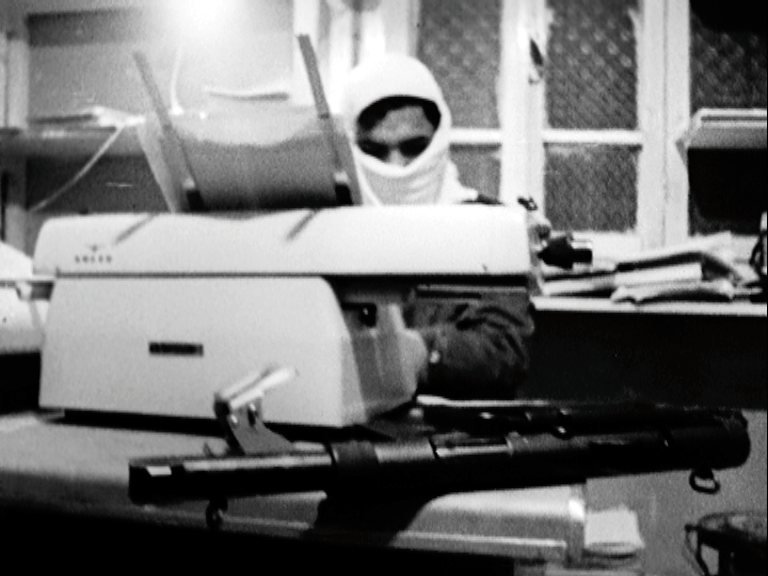 Luigi Perelli’s Al-Fatah: Palestine (1970) chronicles the birth of the resistance closely following of one of its leading formations, the titular Al-Fatah, then led by a young and resolute Yasser Arafat. After a brief historical preamble, the documentary visits the birthplace of the Palestinian revolution: the refugee camps. Having been driven out of their own land, Palestinians have existed as second-class citizens in Israel or as an exiled minority – far from home for those who could afford it, in the daily squalor of refugee camps for those who couldn’t.

It is precisely to these desperate places with no running water, education or freedom, where resignation and quiet desperation constituted the only pastime, that the revolution planted the seeds of dignity, self-respect and liberation. Though sometimes burdened by over-simplistic commentary, Perelli’s film convincingly conveys the regenerating thrust of armed resistance, which represented instead a meaningful and hopeful re-organisation of daily life. Women’s groups, literacy units, military drilling, reading sessions, traditional dances and children’s militant education contributed to turn the desolated indetermination of refugee camps into a self-determined laboratory of emancipatory practices, the social(ist) incipient of a free Palestine that never came to pass. 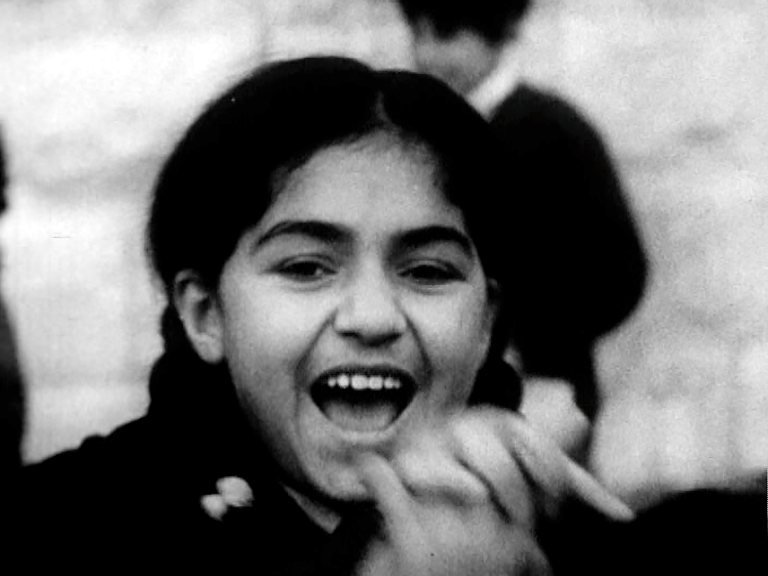 Made by a breakaway faction of the US Newsreel collective Pacific Newsreel, We Are the Palestinian People (Revolution Until Victory, 1973) edits exclusively archival footage into a detailed, historical reconstruction of the conflict. Great attention is paid to the political genesis of Zionism, the role of colonial Britain in assigning [sic] Palestine to zionists and the strategic role Israel has played ever since in the control and monopoly of the world’s most sought-after commodity, oil. While other titles in the season stressed the internationalist dimension of the Palestinian revolution by linking it to other anti-colonial struggles, the same concept is rendered here specularly – for if anti-imperialism is a transglobal phenomenon, so is repression. Incorporated into the montage is footage of general Moshe Dayan visiting Vietnam to learn about counter-insurgency techniques (which he must have put to tragically better use than his American colleagues).

Revolutions, like wars of aggression, are easily idealised, abstractly projected as a sort of monolithic, heroic gesture; reality is often less romantic, yet no less compelling. Indeed, the personal stories animating historical movements can sometimes offer a less alienating entry point into their complex, painful and occasionally triumphant unfolding. 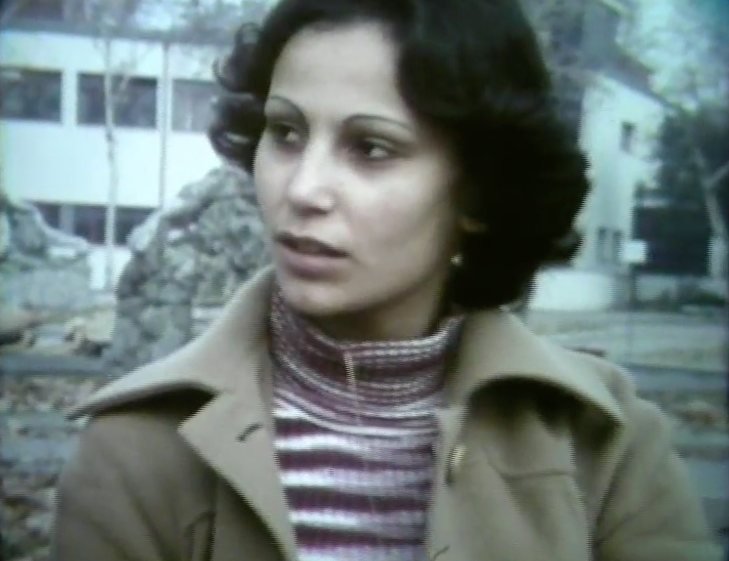 Such is the case of A Reason to Go (aka Land of the Fathers, 1976) where the Dutch director George Sluizer (he of The Vanishing) reunites with a Palestinian family living in Beirut after a two-year war between rightwing Christian Phalangists and pro-Palestinian forces had left parts of the Lebanese capital in ruins. Unsure if he would find them all alive, Sluizer catches up with them and listens to their stories, wherein the personal and political fuse. Here the Palestinian’s struggle for their right to return is told with through their own words and instances, different generational and political perspectives emerging united in the conviction that revolution will be until victory, even if studying engineering in an Italian university.

Kindly catering to the fetishistic fantasies of the cineast community, the programme included The Fifth War (1980), in which Vanessa Redgrave lends her charm and, as time has proved, steadfast commitment to an almost journalistic chronicling of the last stages of the revolution – specifically the Litani Operation, when Israel invaded southern Lebanon in an attempt to eradicate the PLO. 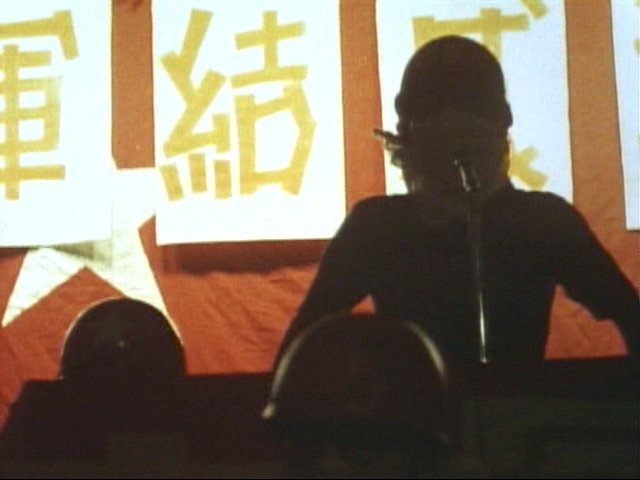 Less journalistic but perhaps more interesting in strictly cinematic terms is Red Army / PFLP: Declaration of World War (Sekigun-PFLP: Sekai sensô sengen, 1971) by Wakamatsu Kôji and Adachi Masao, which the two Japanese filmmakers made in Palestine on their way home from the Cannes Film Festival. Filmed under the loose precepts of Adachi’s ‘landscape theory’, which postulated the visibility of power relations in the very manufacture of manmade landscapes, the film is an agitprop call to solidarity with the Palestinian cause. While Wakamatsu would pursue his militant engagement with the 7th art in strictly fictional forms, Adachi joined soon after the anti-imperialist struggle full time, moving to Lebanon with other members of the Japanese Red Army.

While most films of the series heavily leaned on the realistic register, back then seen as the most ‘appropriate’ form of political engagement, two works by Arab directors stood out for their formal audacity: Christian Gazi’s A Hundred Faces for a Single Day (Miat wajh li yom wahed, 1972) and Kais al-Zubaidi’s The Visit (1970). 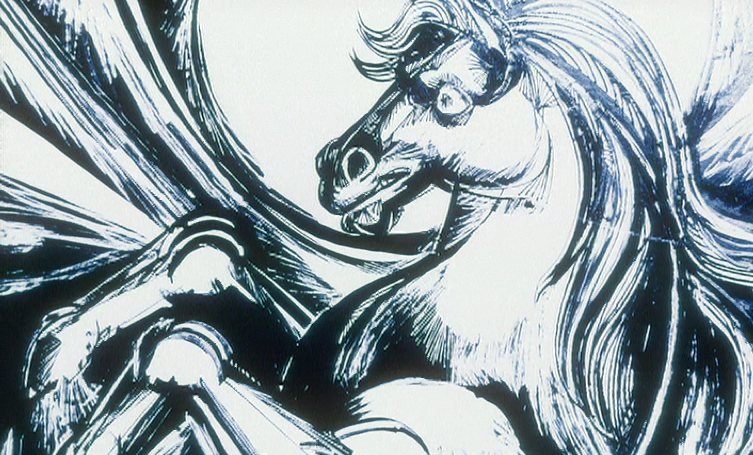 An oneiric and nocturnal abstraction, The Visit confutes the prejudice that frames Middle Eastern cinema under the restrictive lenses of realism. Western audiences tend to consider formal experimentation an exclusive characteristic of their own aesthetic tradition. The assumption underlines a deep preconception that sees non-Western cultures unable to reflect upon themselves or deconstruct their own formal conventions, prisoners of their own culture, whereas the very same term, ‘culture’, stands for creativity and critical production in a western context.

Curiously enough, typical traits of experimental cinema happen to be characteristic of Islamic visual culture that, as Oleg Grabar wrote in The Formation of Islamic Art, “quite consciously sought to emphasise surface over shape and gave itself the means to be as free as possible of an object’s or monument’s physical properties.” Hence – as Laura Marks argues in her book Enfoldment and Infinity: An Islamic Genealogy of New Media Art – the predilections for flow over classical form, for abstraction and open-ended signs and, most interestingly, for embodied perception are all elements we find in Islamic art. Since Islam does not contemplate the visual figuration of God, the body, unlike that of Christ, is not something to be represented but to be evoked. Consequently, images, freed from the burden of figurative representation, suggest rather than dictate possible compositions, whose final shape depends upon the viewer’s elaboration. As Marks clarifies, the arabesque, the hypnotic motifs of carpets and the very lettering of the Arabic language feature flowing signs where image, information and spirituality unfold from one other. 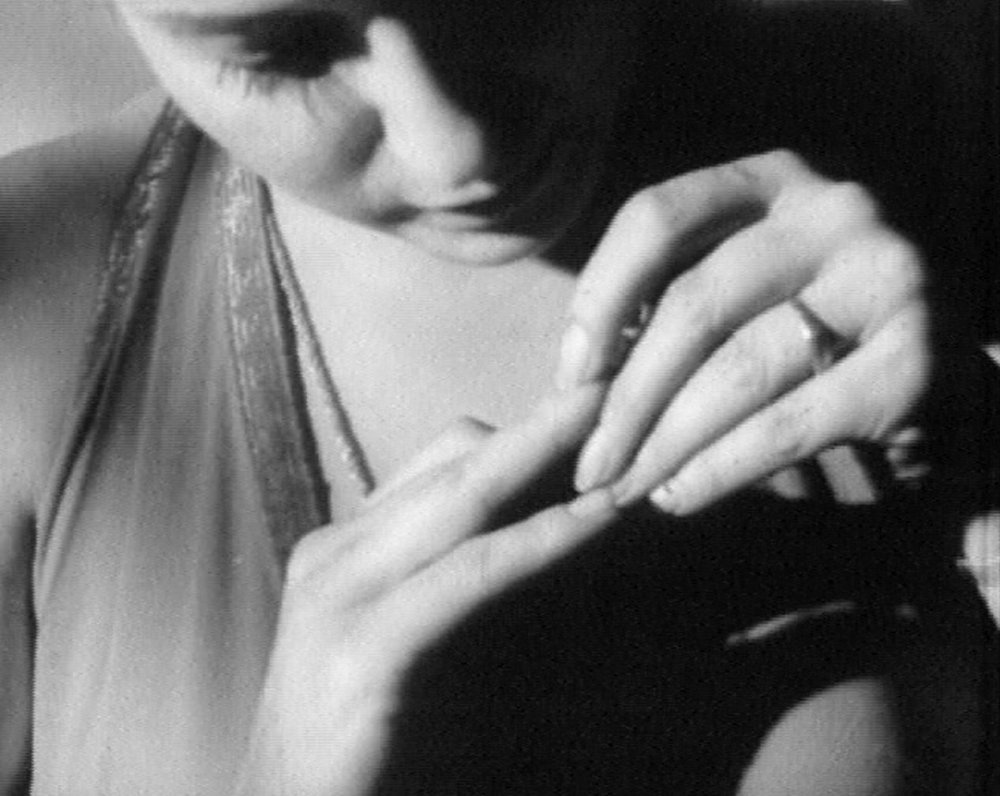 It’s interesting how, for al-Zubaidi and Gazi, the commitment to and involvement with the Palestinian cause entailed experimentation on a formal level, thus matching the military effort to imagine another future for Palestine. Rejecting all propagandistic or narrative conventions, A Hundred Faces for a Single Day combines documentary and experimental narrative techniques to indict the revolution’s own cultural and political elites for what Gazi considered their hypocrisy and decadence. Boasting mesmerising sound design and a daring lead performance by Madonna Ghazi, it is militant filmmaking at its most iconoclastic and exhilarating. Disparaged at the time as too “ontologically revolutionary” by the very cultural elites it critiqued [to quote Guy Hennebelle’s The Palestinian Cause in the Cinema], the film represents the ultimate form of political cinema, that which never compromises or settles for less, even in the name of a potent cause.