from our November 2012 issue 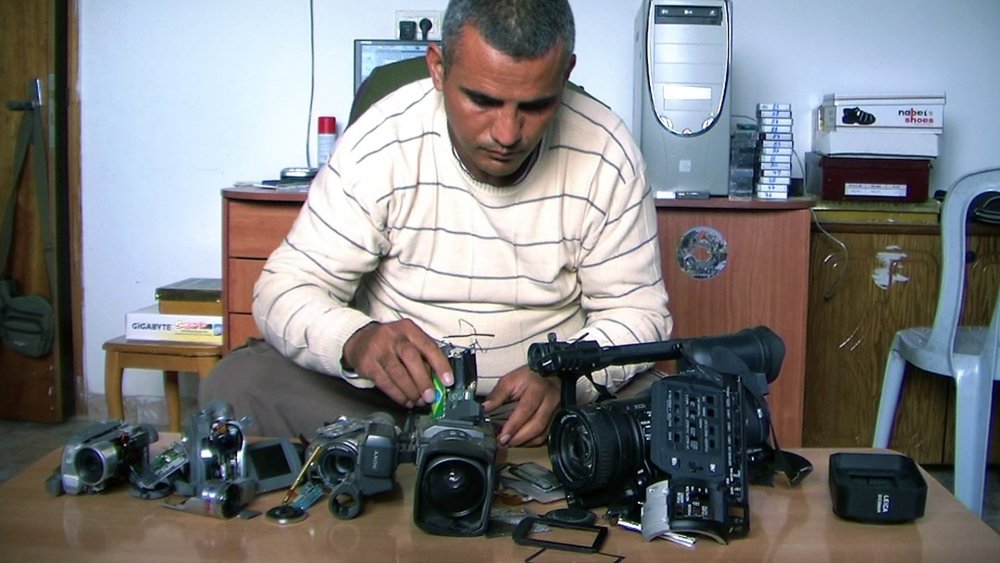 “I film to hold on to my life,” Emad Burnat tells us as he begins documenting his fellow Palestinian villagers’ protests against the Israeli separation barrier that will deprive them of half their cultivated land and the olive trees that grow there and sustain them. Five years later, after countless protests, demolitions, injuries, imprisonments and several deaths, he puts it slightly differently: “I film to heal. It helps me to confront life and survive.”

The first thing we hear in Five Broken Cameras, before the first notes of Le Trio Joubran’s plangent score licks in, is the hiss and crackle of a damaged soundtrack; the first images are fleeting and chaotic – earth, sky, indistinct figures scudding across the pixellated screen – backed by a confused medley of voices, Arabic and Hebrew, angry, agitated, alarmed. Confusion is the theme, as Emad’s voice soon tells us: “I’ve been through so many experiences – they burn in my head like a hot flame. Pain and joy, fears and hope are all mixed together. I’m losing track. The old wounds don’t have time to heal. New wounds will cover them up.” We see Emad himself, handsome and serious; the five eponymous shattered cameras; and a small boy, as solemn-faced as the man, gazing out through a doorway. This, we soon learn, is Gibreel, Emad’s fourth and youngest son.

In Five Broken Cameras, the personal and the political are intertwined to the point of inseparability. Emad’s initial intention in buying his first camera isn’t to film the protests but to record the infancy of Gibreel, born to him and his wife Soraya just prior to the arrival of the Israeli surveyors. But even before this, he recalls, outside events seemed to shadow their young family. “Each boy is a phase of our lives… Mohamad, our eldest, was born in 1995, in the time of hope after the Oslo Peace Accords… We could go to the sea every summer. Yasin was born three years later, in a time of uncertainty. The very day the Intifada began in 2000, Taki-Ydin was born… His childhood was shaped by the long siege the West Bank was under.”

And now Gibreel, child of the protests. Over the five years covered by the action we often watch events through his wondering eyes, see him try to make sense of the loud and incomprehensible happenings, of the banners and the uniforms, the shouting and the violence. “The wall”, “cartridge”, “army” are among the first words he speaks. Disquietingly, before the end of the film he’s telling his father that he wants to kill Israeli soldiers.

This, from the mouth of a four-year-old boy, is the only time we hear a Palestinian talk of violence against the occupying forces. And despite all the provocation – the bullets, the beatings, the evictions, the gas grenades – the most we see from the Palestinian side is a few boys throwing stones. “Clinging to non-violent ideals isn’t easy when death is all around,” muses Emad, after an 11-year-old and a teenager are shot dead by Israeli troops in a neighbouring village. At one point we see one of the villagers, Daba, held helpless against a jeep, blindfolded and his hands tied behind his back, while a soldier shoots him in the legs at point-blank range. 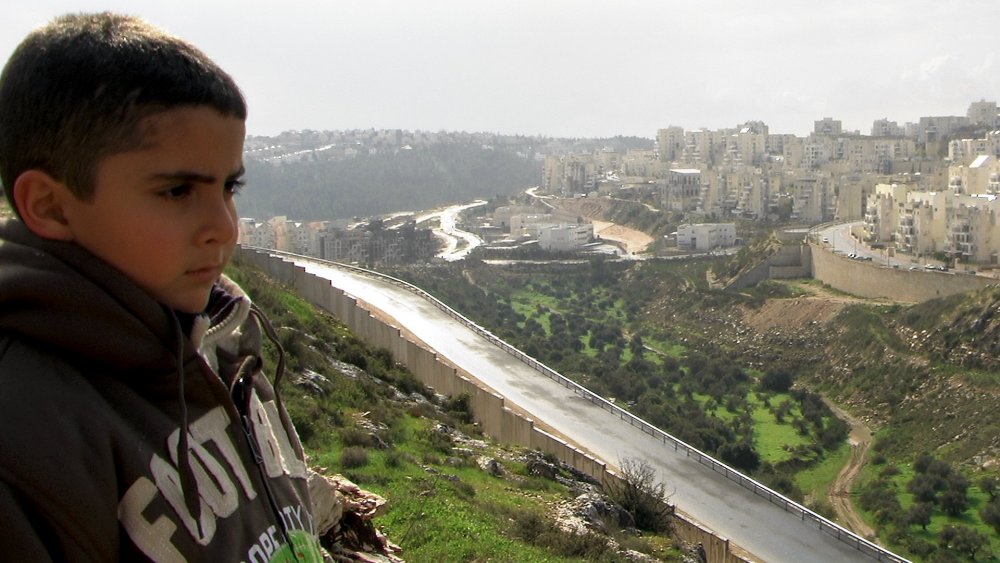 Daba’s brothers, Adeeb and Bassem, lead the protests. Adeeb – who, Emad notes, “is always looking for an opportunity to make a scene” – rants theatrically into the faces of the soldiers: “Have you no heart? Have you no family? Every one of you knows that this is village land. You stole my land!” His brother Bassem, by contrast, is “the only one who’s still optimistic… He still dreams about fixing the world.” A cheerful giant of a man, he’s much loved by the village kids, who “see a lot of hope in him” and nickname him ‘El-Phil’ (the Elephant); the film’s most traumatic moment comes when he gets a gas grenade full in the chest and dies in agony. He’s mourned by the whole village, not least Gibreel (“They shot my Phil. What did he do to them?”), and Emad senses the level of anger and hatred dangerously rising.

Emad admits to nursing the illusion that the camera will somehow protect him, even though he knows full well it won’t. He’s injured more than once and, like three of his brothers, arrested and jailed, though later released because the Israelis claim to have ‘lost the evidence’. In one episode of Kafkaesque absurdity, soldiers come to his house and order him to stop filming there, because it’s been declared a ‘Closed Military Zone’. He’s taken to a house in another village and put under house arrest. When he’s threatened with arrest for the third time, Soraya, previously supportive, finally loses patience: “See what’s happening to us because of your filming? If they take you, what’ll we do, the kids and I? Stay home with your kids and find something else to do. Enough with the filming!”

Not everything is grim: the film has its moments of humour, of incongruity even. At one point we’re introduced to a flock of hens who, although they have a perfectly good coop to nest in, insist on perching on the branches of a tree. The villagers take a certain pride in the birds’ eccentricity. “They have their freedom,” observes Adeeb pointedly. 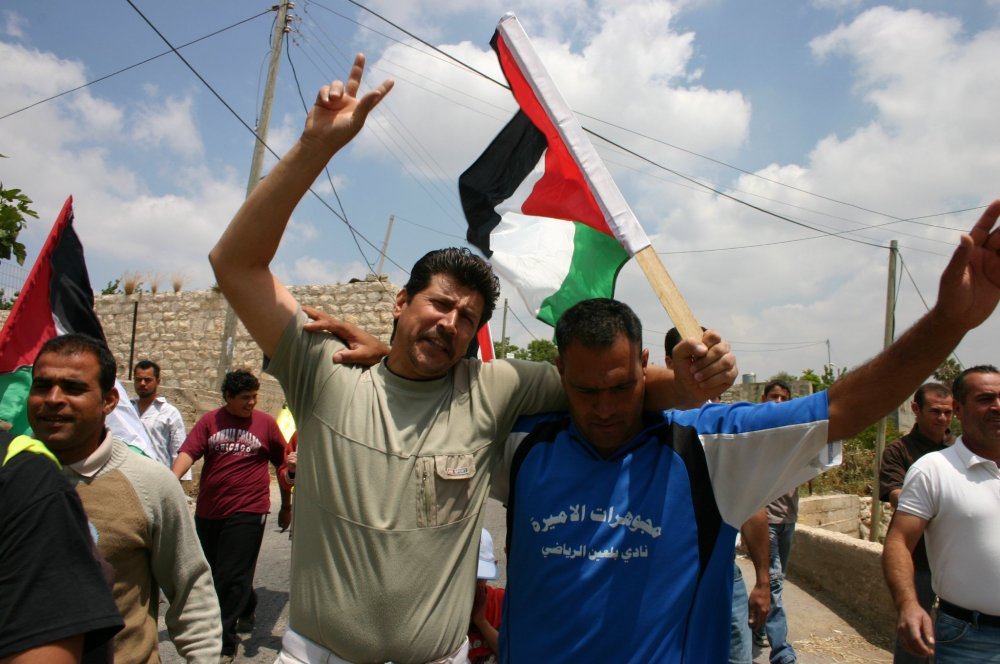 Winner of the World Cinema Documentary Directing Award at Sundance in 2012, and of numerous other international awards, Five Broken Cameras has been described in some quarters as manipulative – which it almost inevitably is. As with any documentary, questions must always remain over what was left on the cutting-room floor. Emad’s footage was edited by the Jewish-Israeli documentary director Guy Davidi, who also scripted Emad’s voiceover commentary and receives a credit as co-director. Outside activists, both Jewish and non-Jewish, Israeli and non-Israeli, joined the villagers in their protests, and indeed the film was partly funded by the Israeli government.

Further ironic complications: after he was injured when his jeep crashed into the barrier, Emad was taken to an Israeli hospital; in a Palestinian hospital, he notes, he almost certainly wouldn’t have survived. Yet because the Palestinian Authority doesn’t recognise his injury to be ‘resistance related’, he gets no help with the hospital bills. “If you don’t fit the resistance image,” he reflects ruefully, “you’re on your own.” As always with the Israeli-Palestinian conflict, the truth (to quote Oscar Wilde) “is rarely pure and never simple”.

Even so, there’s a raw immediacy about Emad’s footage that’s impossible to resist. The very amateurishness of the filming carries its own sense of urgency, of a determination to bear witness whatever the odds. The images – the fat white smoke of gas grenades arcing through the sky, ancient olive trees uprooted by mechanical diggers, the massed concrete tenement blocks of a new Israeli settlement marching across the hills – communicate with stark indignation.

And in the end, we get closure: a small but crucial victory. The wall is shifted back a hundred yards or so, restoring some if not all of the villagers’ land. New olive trees are planted in the ravaged soil. Emad is able to take his two youngest sons, Gibreel and Taki-Ydin, to the seaside for the first time in their lives, and the film ends with them frolicking on the beach, the innocence of their childhood temporarily restored. Manipulative perhaps – but moving nonetheless.