Not forgotten: The Palestinian Film Archive

The Palestinian Film Archive vanished during the 1982 Israeli siege of Beirut. Sarah Wood’s For Cultural Purposes Only revives the memory of its contents through verbal description and drawings. Palestinian writer Adania Shibli finds her own memories stirred. 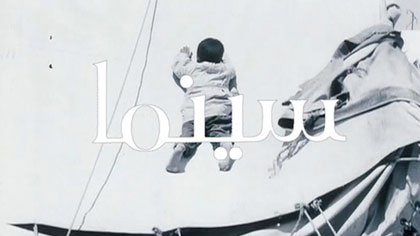 Sometimes, when you talk to someone, for instance about your first day in school, the other person rushes to remember their own first day in school as well. I am well aware that this can be annoying. Still, this is exactly what I shall proceed to do in relation to Sarah Wood’s experimental film For Cultural Purposes Only.

The film consists of flashes of memory that run parallel in the said and in the seen. In the former one hears a number of people, including Palestinian film-makers, describe specific scenes they remember watching from Palestinian films that, at least in their original versions, were lost with the disappearance of Palestinian Film Archive during the Israeli siege of Beirut in 1982. The seen part of the film attempts to document these scenes, which are no longer possible to watch, by drawing them.

The story of the loss of the Palestinian Film Archive is one that is being lived out by those interested in Palestinian cinema, rather like the way in which the Palestinian refugees are living the story of their loss of all they owned following the Nakba (‘Palestinian Catastrophe’) of 1948. The Palestinian film-maker Azzah al-Hasan made a documentary on the issue, Kings and Extras (2006), in which she attempted, like a private detective, to search for the archive and all those connected with it up until the moment of its disappearance. And just last August, al-Aqsa University in Gaza (yes, Gaza!) hosted a conference that dealt with the issue of the loss of the archive and its consequences, including the inability of early Palestinian cinema to take its place in the archive of world cinema. 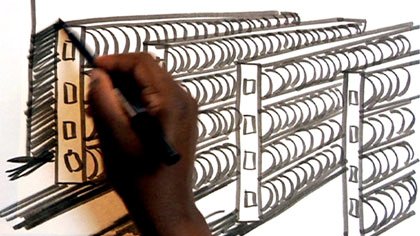 For me, however, as for many of the younger generation, the question of the archive’s disappearance has meant something else completely. It has meant our inability to watch these pioneering films, or to even know that they exist. Our knowledge of Palestinian films is restricted to those produced since the 1980s, as if Palestinian cinema did not exist before then. And so I had not watched any of the films that Wood referenced in her film, or even recognised any of their titles, bar one – Qasim Hawl’s Aa’id ila Haifa (Return to Haifa, 1981).

I got to know about the existence of this film only in 2004, when I watched it during the Palestinian film festival titled ‘Dreams of a Nation’, organised by Hamid Dabashi, a film professor at Columbia University in New York, and Palestinian film-maker Annemarie Jacir. The festival screened that film on videocassette, along with others whose original prints had also been lost. Among them was Laysa Lahum Wujud (They Do Not Exist, 1974), by Mustafa Abu Ali, one of the pioneers of Palestinian documentary cinema, and one of the film-makers to whose works Wood refers in her film.

They Do Not Exist takes its title from a reply by the then Israeli Prime Minister, Golda Meir, to a question about the Palestinians, and it depicts scenes of life from the Palestinian refugee camp of Nabatiyeh in Lebanon. It begins with long shots that carefully but unassumingly contemplate a casual morning in the camp, with women busy eating breakfast, hanging up washing, sweeping the courtyard or kneading dough, while the children are either playing or disturbing their mothers. One of the women sidesteps this disturbance by pressing a piece of dough into the hand of her breastfeeding child, whose body in her lap surrenders to the rhythm of her movements that are dictated by the kneading. In the background, one can hear one of Umm Kulthum’s songs, which women normally listen to in the morning. Later, this music is replaced by the voice of a little girl reading out a letter she has written to someone, in which she explains that she is giving him a towel and a piece of soap as a present; then she apologises for the meagerness of her gift. The voice of this young girl in turn transports the viewer out of the camp to the recipient of the letter, a resistance fighter huddled in the hills out in the wilderness, then to Israeli warplanes hovering in the sky, which bring us back to the camp, now completely destroyed. At that moment, one cannot help but recall the images of that casual morning in the camp, with its women and children, as well as the little girl who was reading the letter, all of whom “no longer exist”. 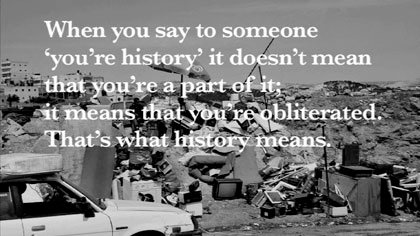 I had met Abu Ali, the film’s director, a few times before. But until then I had not seen any of his films; nor had I been particularly keen on doing so. I do not know if this was because of his bellowing laughter, his thick glasses, or his voracious smoking. After watching the film, I felt terribly ashamed of my sheer ignorance of what he had offered to documentary cinema, especially that pertaining to Palestine. Usually, films of this kind are impressive to the same extent as news from Palestine is impressive. The story of Palestine has been impressive for at least the last hundred years. Yet They Do Not Exist does not depict any impressive story, but instead a simple, normal daily life that the viewer cannot overly sanctify. And suddenly, this life no longer exists. That is all there is to it. In other words, the film does not follow any particular event to narrate the Palestinian tragedy. Rather, by merely documenting the non-event and its disappearance, it manages to penetrate the extent of this tragedy.

A few weeks ago, Abu Ali unexpectedly passed away, having offered nothing of note to Palestinian cinema since 1982. And just as his film consecrates the memory of a life that no longer exists, and so summons it back to existence anew, Sarah Wood’s film consecrates the memory of this film-maker who is no longer with us, along with the Palestinian Film Archive, and summons them both back to existence anew.