350 miles from the front lines of Ukraine’s civil war – but at the heart of the country’s cash-strapped cultural sector – the famous port city staged its fifth international film festival with a pride that seemed defiant going on decadent. 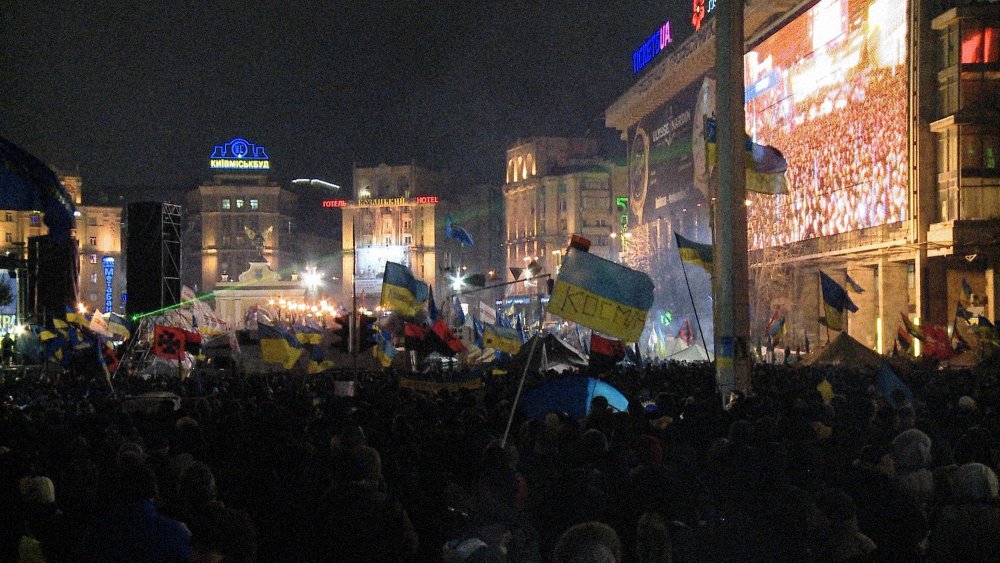 Must the show go on? External circumstances can often push a cultural event across the hazy lines that separate the admirably persistent from the dubious, the inappropriate and then the tasteless.

Between the fourth and fifth editions of OIFF, Ukraine underwent epochal, well-chronicled upheavals – triggered by the mid-winter protests in Kiev’s Maidan Square which culminated in ‘Russia-friendly’ President Viktor Yanukovych’s replacement by unambiguously pro-EU businessman Petro Poroshenko. At the time of writing, the civil war that subsequently blew up in the country’s far east shows no sign of abating.

Odessa may be 350 crow-fly miles from the front lines, but during the festival regular and grim dispatches from the east cast an increasingly deep shadow over festivities. The opening (“we believe that culture can rise above politics” proclaimed the MC) included formal silence to honour 19 servicemen killed that dawn in a rocket attack. The black-tie, red-carpet curtain raiser at the Soviet-era Mikhail Vodyanoy Musical Comedy Theatre thus took on an air uneasily combining decadence and defiance.

OIFF’s preparations had for some time been operating under various dark clouds: only 800 yards from the Vodyanoy Theatre stands the charred hulk of Trade Union House, dominating gigantic Kulikovo Field Square. 42 people were burned or bludgeoned to death here on 2 May during clashes between ‘pro-Russians’ and ‘pro-Ukrainians’. Odessa has been conspicuously free from civil strife since that day. 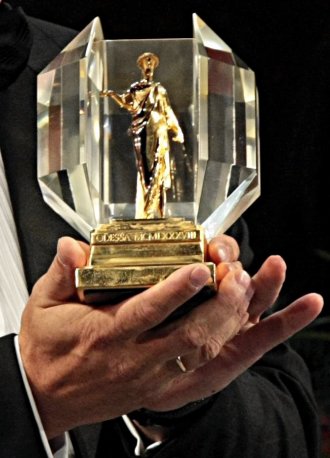 Festival organisers coped with a more direct existential threat when the government withdrew all finance; an online crowdfunding campaign raised $25,000 – a small fraction of the overall budget, but an opportunity for individuals and institutions to offer symbolic support.

Many foreign guests thus arrived in a city with several visibly impoverished quarters expecting some make-do-and-mend affair of shoe-strings and hair-shirts. Instead they discovered an mini extravaganza evidently aspiring to the higher echelons of the European circuit.

The festival’s animated ident, warmly applauded before each programme, pointedly echoed those of Cannes and Berlin: an ascent of the Eisenstein-immortalised ‘Potemkin’ Steps, up towards the Duc de Richelieu statue commemorating the nobleman who helped Odessa flourish. The festival awards, the Golden Dukes, are smaller versions of the statue – an inadvertently apt symbol for the 2014 event, as the Frenchman’s hand-extended pose has long been mockingly interpreted as a cash-cadging appeal: “give money here”.

The organisers’ trouperish mentality was maintained in the face of what seemed like daily calamities. On the final Friday, shockwaves were still being absorbed by the previous day’s downing of Malaysian Airlines flight 17 when news broke that popular Ukrainian actor Vitaliy Lindetskiy had died suddenly at the age of 42. Hours later Lenitskiy’s final project – Taras Tkachenko’s social drama The Nest of the Turtledove – won the prize for best work-in-progress presented during the four-day Film Industry Office (FIO) event. 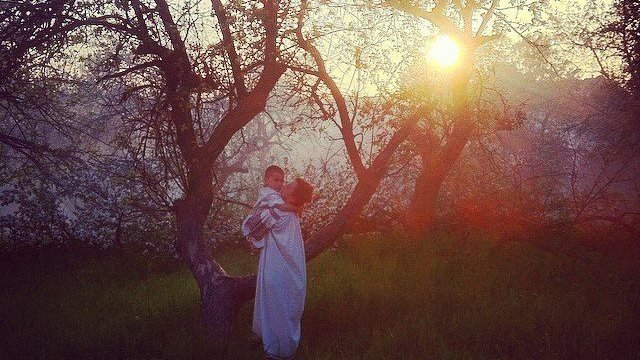 One step forward, two steps back? This triumph-tragedy coincidence epitomises this highly precarious period for Ukrainian cinema in general, at a time where cultural funding has been slashed almost to zero despite mounting international interest.

Present at FIO was Bernd Buder, programme director of eastern Germany’s Cottbus Film Festival, whose next edition will include a Ukraine focus. “Some of the projects pitched in Odessa really have a huge international potential,” he noted, “and I hope the international film world will be open to co-produce with Ukrainian producers, even though they will not bring that much support from their national film agency.”

That agency’s representative at FIO, Stanislas Prytula, was blunt about the financial strictures under which his organisation must operate: war efforts take priority, with culture a long way down the queue. “If the nuclear power industry needs a new accelerator,” he remarked, “the government will probably be able to find the money. Nobody wants a second Chernobyl.” In terms of the allocation of the film agency’s meagre funds, Prytula – whose aspiration is that Ukraine can eventually emulate the cinematic status of his country’s neighbours Poland and Turkey – said “we don’t want to only fund films with Cossacks, and patriotic cinema”.

At the time of independence, this land of Alexander Dovzhenko, adopted home of Sergei Paradjanov and Kira Muratova, was – according to figures supplied by Prytula’s agency – turning out more than 30 fiction features per annum. Between 1996 and 2010 the average dropped to six; from 2011 to 2013 the figure more than doubled to 15. But the short-term future is uncertain at best. 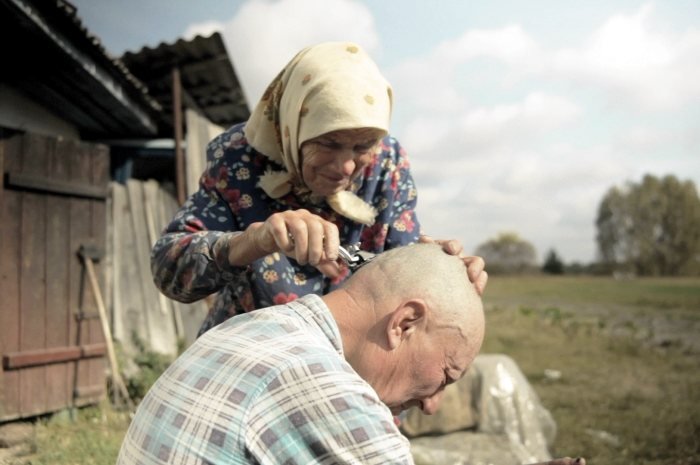 “During the Soviet Union,” says Vasyanovych, “we had filmmaking in Ukraine; but after the collapse of the USSR, Ukrainian cinema collapsed. Then we had this period during the last few years when the government supported cinema and we saw that cinema revived. Due to the political situation nowadays, unfortunately this stopped. We think it’s high time for all the filmmakers to unite and make the government hear us.” 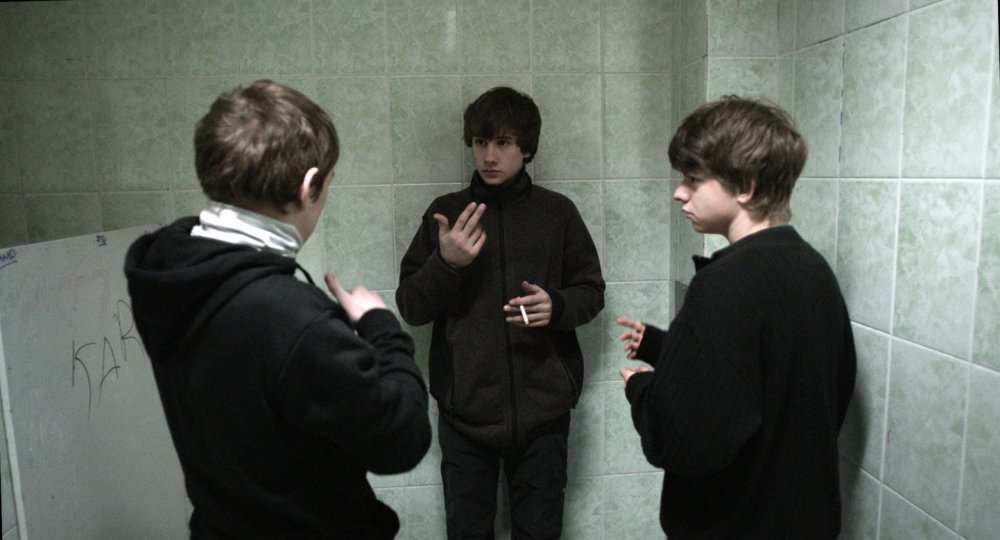 Vasyanovych is well-positioned to lead the campaign. He was cinematographer, editor and co-producer of The Tribe (Plemya), Myroslav Slaboshpytskiy’s blackly-comic, arrestingly confident tale of nefarious doings at a Kiev boarding-school. Told entirely in unsubtitled sign-language, The Tribe won top honours at Cannes’ Semaine de la Critique earlier this year and was one of the genuine critical sensations on the Croisette, alongside Sergei Loznitsa’s Ukraine-Netherlands co-production Maidan.

The latter’s detached but stirring reportage on the Kiev protests had its Ukrainian premiere at OIFF. The festival had no shortage of emotionally charged events, including a benefit evening for Oleg Sentsov, the Ukrainian director currently detained in Russia on terrorist charges. And around 15,000 turned up one muggy Saturday night for Hitchcock’s Blackmail on the Potemkin Steps. [See Robin Baker’s BFI News report.] But even in such contexts Maidan’s late-evening screening at the Festival Palace stood out. 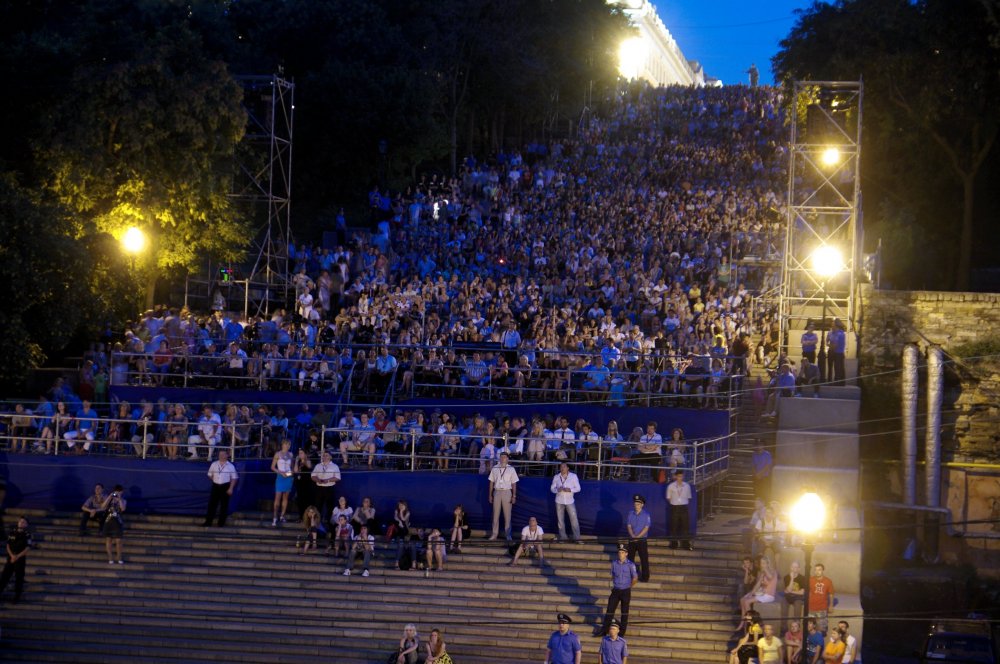 Loznitsa twice shows massed thousands belting out the national anthem; at both Odessa projections the sell-out audience of 1,260 rose to their feet, many of them joining lustily in. The effect on foreign visitors was double-edged: an appreciation of wartime national spirit; qualms about a potentially damaging nationalism.

Loznitsa himself was taken aback by the impromptu display of patriotism, reflecting afterwards that “we are dealing with a state that is being born. The Ukrainians will go through the stage where they have to define themselves, their identity, as opposed to all the other identities of other states, other nations. How dangerous is it? I don’t think it is.”

As a member of the international competition jury, Loznitsa returned to the Vodyanoy Theatre for the closing ceremony. He was warmly applauded – as was festival head Viktoriya Tigipko when, acknowledging the “difficult” circumstances of 2014, she announced OIFF’s 2015 dates. The show goes on.

Related to News from the front: Odessa 2014