In this month’s instalment of the Marvel Cinematic Universe™: Vision and the Scarlet Witch marry! Hulk and Iron Man tussle! Quicksilver runs! Ultron sneers! And so much more… 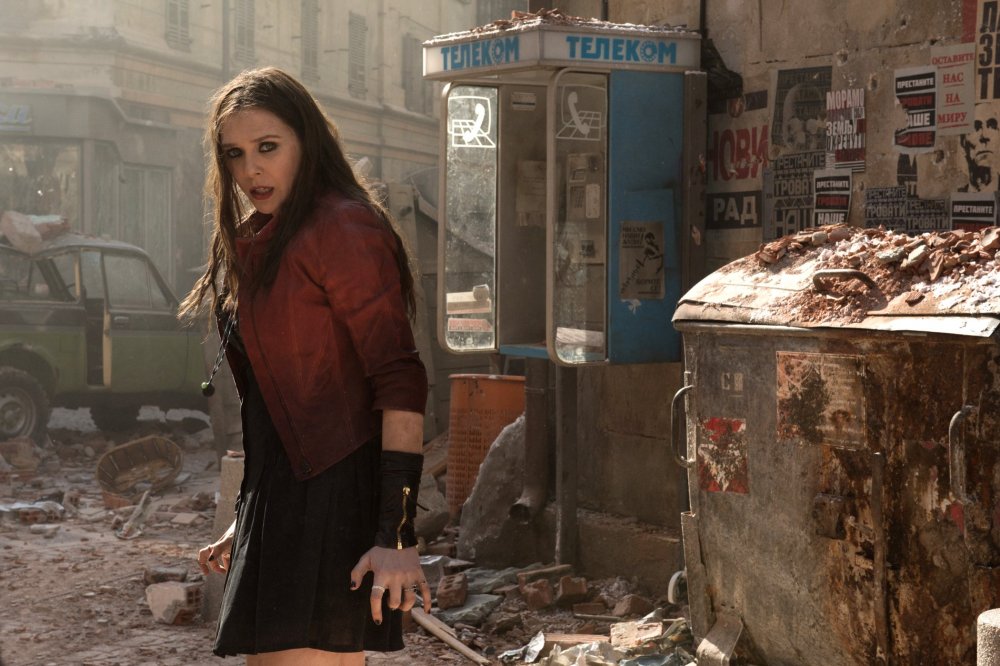 Elizabeth Olson as the Scarlet Witch, one of the more significant new recruits to Joss Whedon’s latest contribution to the Marvel tapestry

The downside of Marvel’s ongoing cinematic universe is that the Avengers films, which bring together players from several individual series, have to spend so much time juggling elements thrown in the air by other movies and setting up plot threads planned for the next clutch of sequels that their actual stories get squeezed thin. Joss Whedon’s second grab-all platter of Marvelmania works hard to find something for all the regulars to do while bringing in significant new players – notably the Vision and Scarlet Witch, whose up-and-down comic relationship (mutant and robot get married, cuing the Daily Bugle headline “Witch weds widget”) is signified by a single reaction shot of red-eyed Elizabeth Olson after a scarlet-faced Paul Bettany makes an entrance – and finding moments of quiet emotion amid super-battles and fan-pleasing confrontations.

Some set-pieces, like the incredibly destructive yet bloodless clash between a fully-enraged Hulk and Iron Man in specially-designed ‘Hulkbuster’ armour in downtown Johannesburg, are oddly beside the point. What distinguishes the Avengers saga, all the way back to the first Stan Lee and Jack Kirby issues, is the soap-operatic free-for-all between super-villain schemes (even Ultron, an artificial intelligence, sneers at the idea of explaining “my evil plan” to a hero) and kinetic fights. Here, we get a developing relationship between Scarlett Johansson’s Black Widow and Mark Ruffalo’s Bruce Banner – which doesn’t have a precedent in the comics – predicated on her admission that Russian spy training (which includes being sterilised) has turned her into as much a monster as his big green alter ego. By contrast, a folksy reveal shows that Jeremy Renner’s Hawkeye – who was the Black Widow’s original love interest – secretly has a happy home and family outside of avenging duties, though Whedon married off Hawkeye’s comic book wife to someone else on the Agents of S.H.I.E.L.D. TV series so Linda Cardellini is a new, token helpmeet.

These get-togethers feel like comic-book annuals or crossover events, with more characters (including cameos for supporting players from the Iron Man, Thor and Captain America series) than can comfortably be accommodated and big scraps which keep everyone in motion, though the three major solo heroes are on pause in their character arcs. Before yet another climax in which something vast and heavy (here, a whole city) threatens to crash catastrophically to Earth (or Xandar, in Guardians of the Galaxy), Robert Downey Jr’s Tony Stark muses, “No way we all get through this” – a line excerpted in the trailer, with the same effect as the comic cover that promises: “This issue, one of these Avengers will DIE.’ Given the mix of the epic and the petty that characterises Marvel Studios’ handling of its properties, it’s no surprise the eventual casualty is doomed as much by a rights quirk as by the needs of dramatic storytelling. 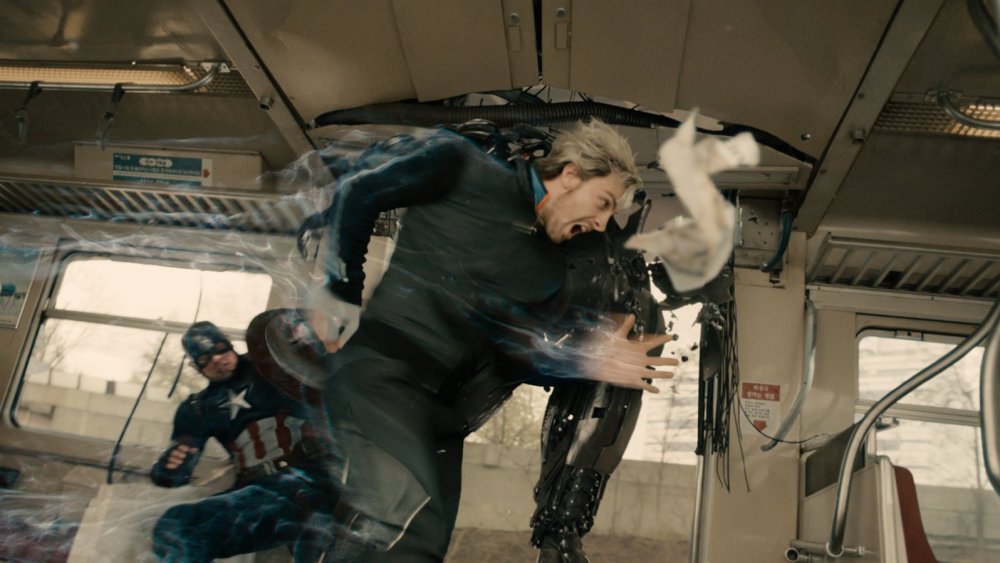 In coming up with a new backstory for the Maximoff Twins – Wanda, aka the Scarlet Witch, and Peter aka Quicksilver, who were until a recent rethink the children of X-Men adversary Magneto, hence Quicksilver’s alternate appearance in Fox’s rival franchise entry X-Men Days of Future Past – Whedon makes them survivors of the damage wrought in their homeland by weapons manufactured by Tony Stark in his pre-heroic warmongering career. Aaron Taylor-Johnson’s wry speedster compares well with Evan Peters’ slacker version of Quicksilver in the Fox version, indulging in a nice mini-feud with Hawkeye, but Whedon isn’t as imaginative a director of scenes involving super-powers as Bryan Singer and nothing here is as strong as the Time in a Bottle set-piece of Days of Future Past.

When it reaches its extended climax, however, Age of Ultron perfectly delivers huge action scenes with the requisite smaller heroic beats. In pointed, deliberate contrast to Man of Steel, much of the finale is concerned with protecting and evacuating civilians from the danger zone before the heavy-hitters take on the multiple-bodied, James Spader-voiced robot baddie. 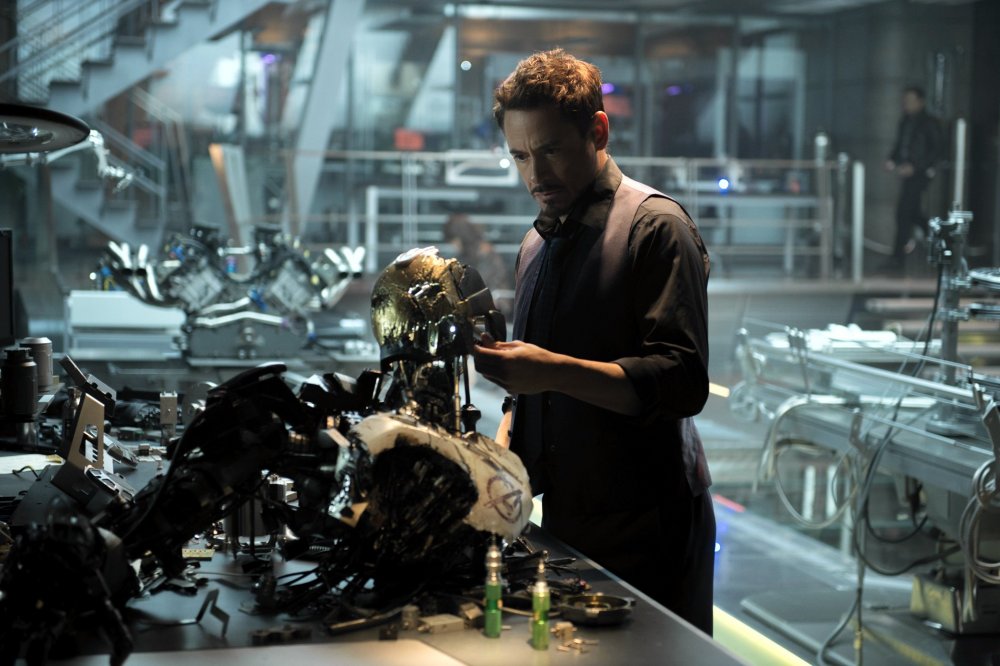 For all the cosmic scale – we get more of Thanos, Marvel’s dullest galactic menace, in the end-credits teaser – Whedon remains happiest with smaller-scale, TV-style snappy patter (Downey Jr talking to himself remains a delight), fanfic-like indulgence of long-established characters (Captain America’s fantasy of a 1945 victory dance he never got to attend) and bottom-of-the-page-panel awesome moments (Black Widow scooping up Captain America’s shield, the Vision casually proving himself morally beyond reproach by lifting Thor’s hammer, Scarlet Witch propelled by grief into huge-scale hexing). The strength of the Marvel Movie Method overall entails a weakness of individual films, which can’t afford to be too daring (as the original, departed directors of Thor The Dark World or Ant-Man found) or resolve anything (even deaths are provisional), because the saga must continue.

Forthcoming films offer subtitles like ‘Civil War’, ‘Ragnarok’ and ‘Infinity’ to convey the scale of what is intended. In the scheme of things, a mere Age of Ultron is a passing thing, a loud prologue for never-ending adventures yet to be told. In his mandatory cameo, Stan Lee perhaps says it best: “Excelsior!”

Correction (24 April 2015): this review originally referred to the planet of ‘Nova Prime’ in Guardians of the Galaxy. Nova Prime is a person; the planet in question is Xandar, as has been corrected.