The Other Side of Orson Welles – cinema’s rare genius through three of his lesser-known projects still ripe for rediscovery.

Plus Asif Kapadia’s heartbreaking Amy Winehouse doc, Joshua Oppenheimer’s return to Indonesia with The Look of Silence, the best of Cannes 2015, a new take on The Misfits and the S&S Interview with John Boorman. 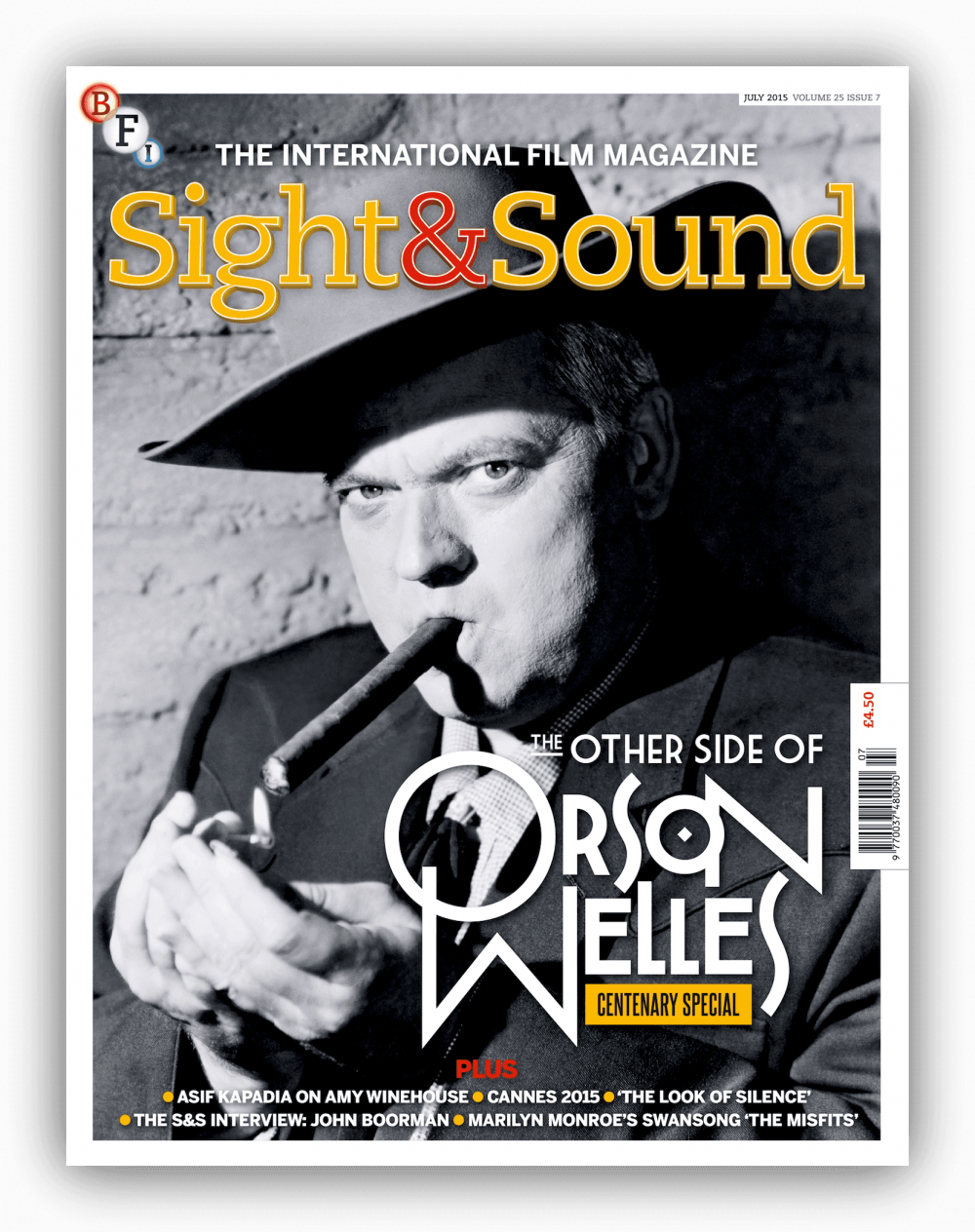 Director, actor, sage, showman, monster, magician, inspiration, cautionary tale… Orson Welles left such a vast body of work that even in the centenary of his birth, we’re still finding new facets of it.

In our cover feature Rare Genius: The Other Side of Orson Welles, Ben Walters examines Welles’ genius through three less fêted projects from different stages of his career. From the beginning: the revelatory pre-Kane roustabout Too Much Johnson, both his first professional cinematic venture and his first unfinished film, which “shows Welles thinking as a filmmaker from the very start – doing things that can only be done with a camera,” and indeed clearly falling in love with editing.

Latterly, the (not entirely completed) 1950s ITV travelogue Around the World with Orson Welles, in which he got to flex his interest in the platform of television – like radio “a domestic, conversational medium ideal for the kind of conspiratorial storytelling that had always been his preferred mode.”

And near finally, the legendary The Other Side of the Wind, “an unfinished movie about an unfinished movie” about a charismatic American filmmaker returning from exile to make a new picture, in which Welles “subjects himself to the kind of is-he-isn’t-he treatment that he had applied to William Randolph Hearst” all those years earlier in Citizen Kane.

Hot on the heels of Cobain: Montage of Heck (though reprising more the style of his own gripping montage bio-doc Senna), Asif Kapadia brings us another generation’s gone-too-soon genius in Amy Winehouse, the north London jazz-soul chanteuse whose talent and need to get wasted, writes Nick James, were both there long before her fame. Built up patchwork-style from every piece of imagery Kapadia could get his hands on, Amy shows us the damning implications of this relentless mediation – “You see that sweet, vulnerable girl hungry all the time for love,” says Kapadia. “And her friends at the beginning, with their tiny cameras, are doing exactly what the paparazzi were doing towards the end.”

Joshua Oppenheimer raised a ruckus with his nonfiction “fever dream” The Act of Killing, in which veterans of Indonesia’s 1965 political genocide dramatised their bloody deeds for the camera and found their boasts and celebrations curdling before their eyes. Before burning his bridges with the country he shot a companion piece, The Look of Silence, with the first of a new generation growing up in the ruins of the savagery, a man called Adi whose study of Oppenheimer’s recordings of the killers and unanswered questions about his own murdered elder brother lead him and Oppenheimer to the antechambers of the perpetrators and their families. Oppenheimer talks to Nick Bradshaw about a movie that’s less political thriller or revenge drama than a poem about memory, inspired by the silences of Ozu and Bresson and the sorcery and magic of magical realism, and defends his intimate approach against some of his critics.

Overleaf, meanwhile, Brian Winston wrestles with inflated claims about the documentary form’s ability to effect social change and the vogue for claiming ‘impact’. Not only is it difficult to discern, he argues, but we shouldn’t even be looking for it.

One of Britain’s great directors, John Boorman has made his first film in nine years with Queen and Country, a sequel to his World War II memoir Hope and Glory in which he broaches the divided generations that inherited the peace (or at least until the Korean War…). “In a modest way, I was trying to show what the hopes were then for a new England, so you could compare it to what actually turned out,” he tells Philip Horne in this month’s S&S Interview, in which the conversation ranges across the director’s Point Blank, Deliverance, Zardoz and Excalibur.

With a Marilyn Monroe retrospective underway at London’s BFI Southbank, Peter Tonguette revisits her (and her “gnarled before his time” co-star Clark Gable’s) swan song The Misfits, whose title couldn’t be more appropriate: from its cast to its characters, the best part of the film is a hell-is-other-people vision of ill-matches and miscommunication, set in a bone-dry Nevada whose vistas swallow these people like the ending of Erich von Stroheim’s Greed.

Those are our features, but there’s more. In our Rushes section, Michael Brooke is fired by Cannon, Hannah McGill opens the ballot box, Kieron Corless meets the director of existential romcom Les Combattants and Mark Cousins gets lost in the forest. Nick James and Isabel Stevens profile the best of Cannes, while Tony Rayns reports from the Hong Kong International Film Festival.

Our reviews include Jane Giles on Amy and Nick Pinkerton on The Look of Silence, while Philip Kemp revisits Bob Hoskins’ greatest London noirs and Philip French praises a new biography of Hollywood’s great fury Robert Ryan. And to end, Farran Smith Nehme on the underrated masterstroke of the gunshot that undercuts the denouement of Howard Hawks’s Red River.

With all that has been written about the great director, it might sometimes feel as if there’s nothing new to say about him, but the restless polymath left such a vast body of work it’s still possible to find underappreciated gems – from his recently rediscovered first professional film outing to a 1950s TV travelogue series to his late unfinished opus The Other Side of the Wind. By Ben Walters. 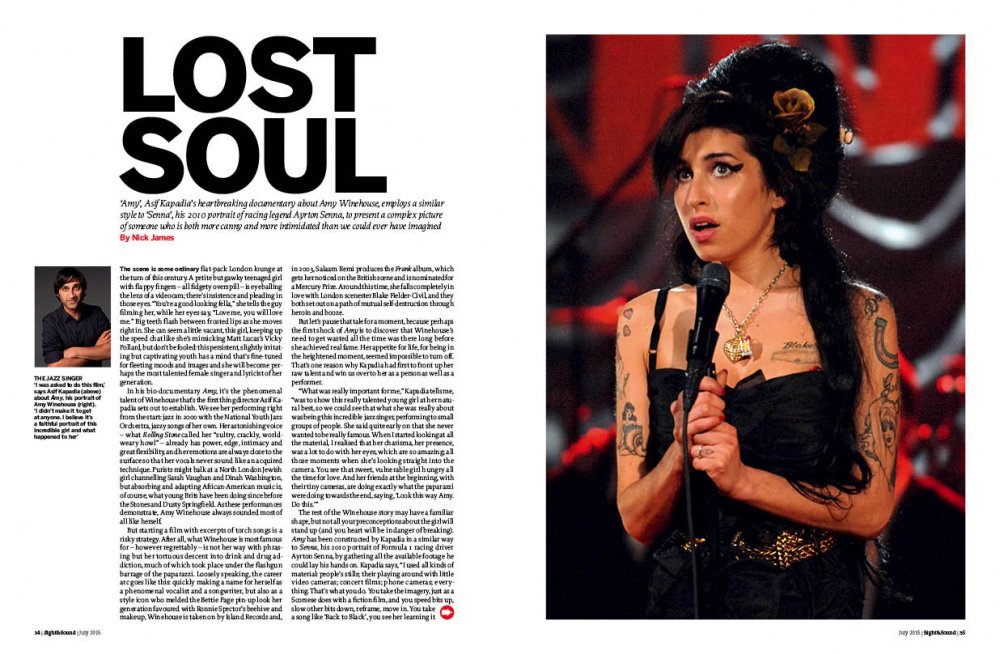 Amy, Asif Kapadia’s heartbreaking documentary about Amy Winehouse, employs a similar style to Senna, his 2010 portrait of racing legend Ayrton Senna, to present a complex picture of someone who is both more canny and more intimidated than we could ever have imagined. By Nick James. 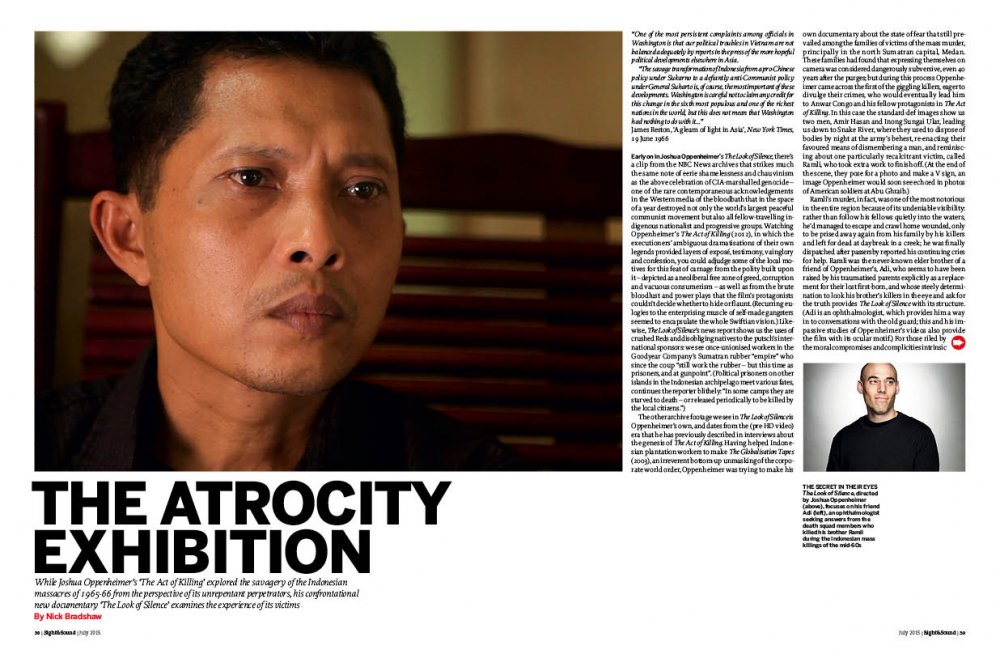 While Joshua Oppenheimer’s The Act of Killing explored the savagery of the Indonesian massacres of 1965-66 from the perspective of its unrepentant perpetrators, his confrontational new documentary The Look of Silence examines the experience of its victims. By Nick Bradshaw.

While it’s clear that documentaries have enjoyed a surge in popularity in the past few years, inflated claims about their ability to effect social change don’t stand up to scrutiny. By Brian Winston. 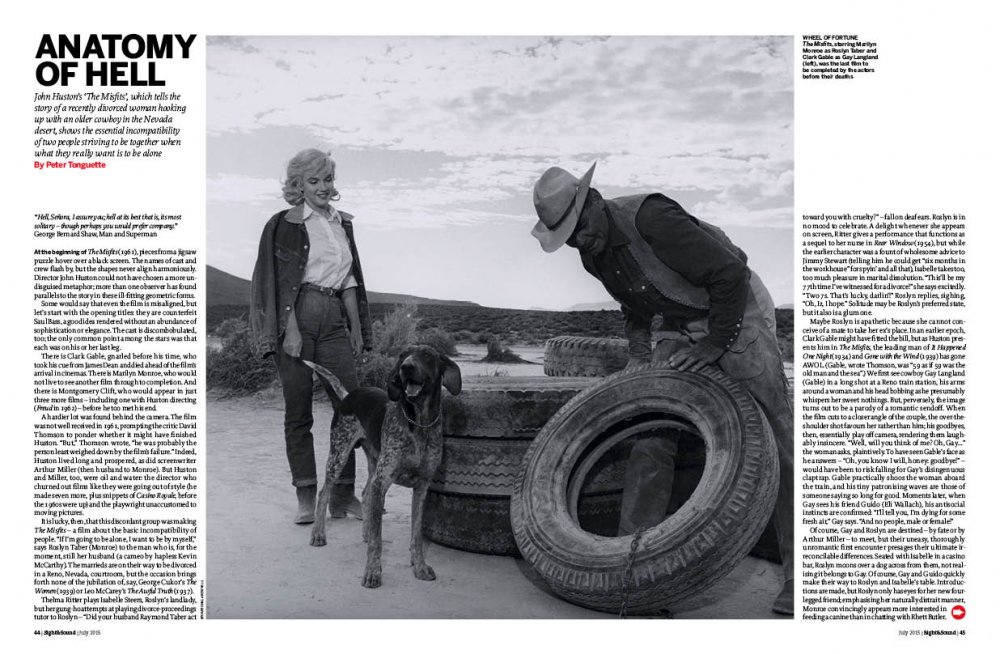 John Huston’s The Misfits, which tells the story of a recently divorced woman hooking up with an older cowboy in the Nevada desert, shows the essential incompatibility of two people striving to be together when what they really want is to be alone. By Peter Tonguette. 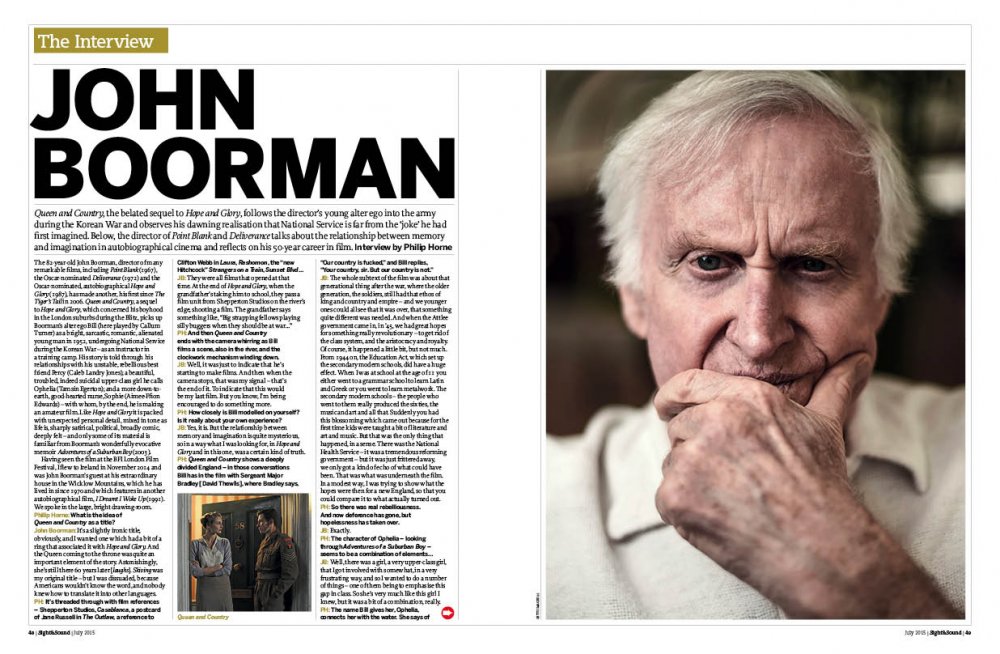 Queen and Country, the belated sequel to Hope and Glory, follows the director’s young alter ego into the army during the Korean War and observes his dawning realisation that National Service is far from the ‘joke’ he had first imagined. The director of Point Blank and Deliverance talks to Philip Horne about the relationship between memory and imagination in autobiographical cinema and reflects on his 50-year career in film. 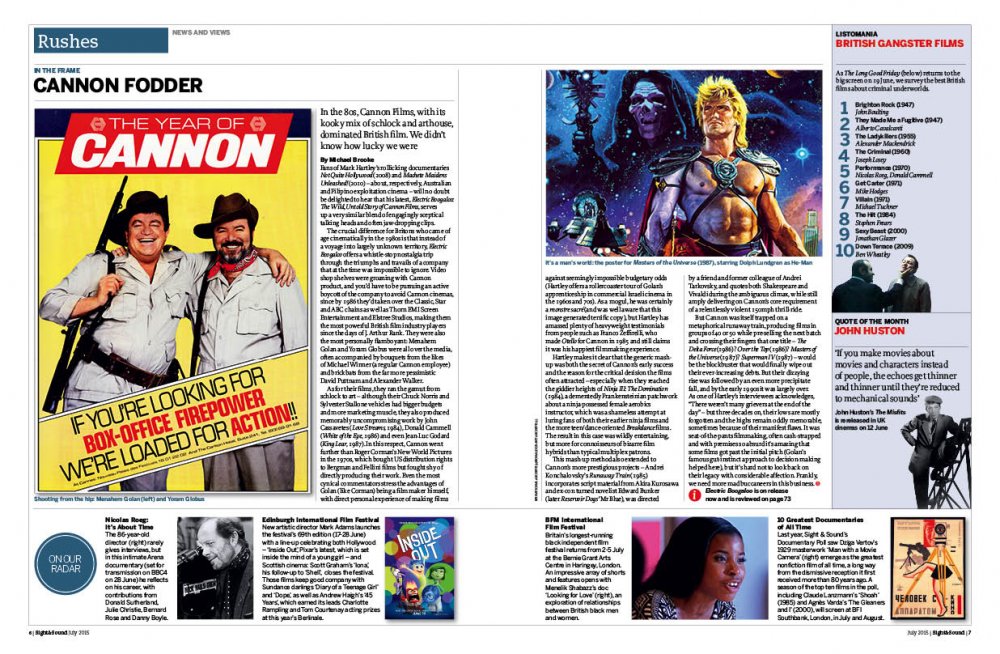 In the frame: Cannon fodder

In the 80s, Cannon Films, with its kooky mix of schlock and arthouse, dominated British film. We didn’t know how lucky we were. By Michael Brooke.

While the ballot box can serve as a shining symbol of democracy, hints of corruption and cynical manipulation are never far away. By Hannah McGill.

As Ian McKellen takes up the pipe and violin in Bill Condon’s Mr. Holmes, we revisit the actors who have helped define a legend. By Robert Hanks.

Thomas Cailley’s Les Combattants is a crowdpleasing romcom filtered through the French auteur tradition – with unexpected results. By Kieron Corless.

Dispatches: The limits of control

One of the great joys of filmmaking, as with all creative endeavours, is riding the line between control and its intuitive, inspirational opposite. By Mark Cousins. 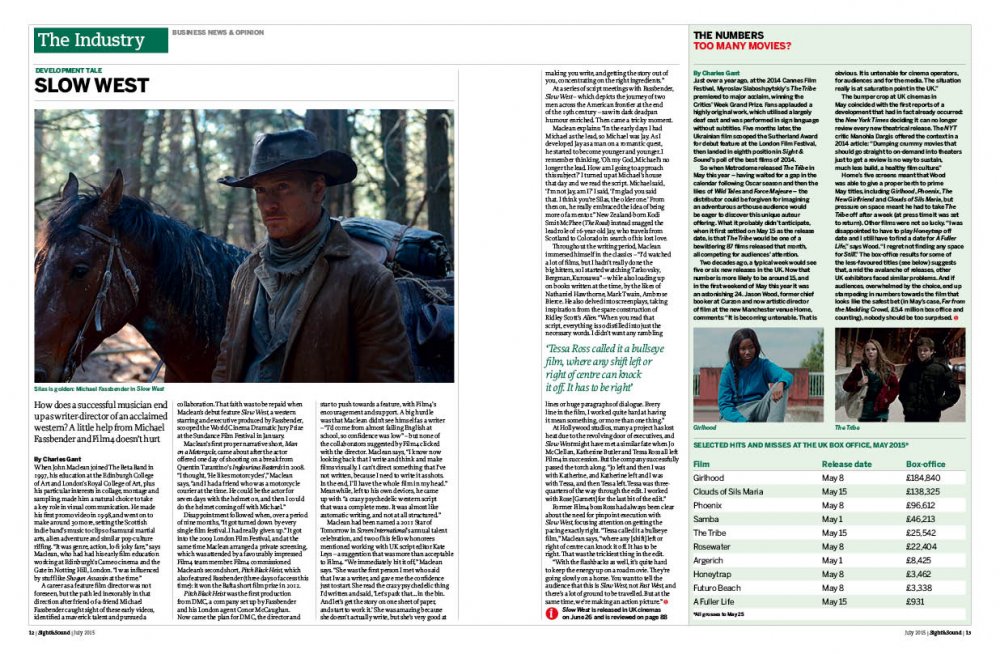 How does a successful musician end up as writer-director of an acclaimed western? A little help from Michael Fassbender and Film4 doesn’t hurt. By Charles Gant.

The numbers: Too many movies?

As the landscape for international co-productions changes, we have to find new ways of supporting – and defining – British films. By Ben Roberts.

A new generation of exhibition sound technology is helping to expand cinema’s storytelling potential beyond the screen. By Jasper Sharp.

This year’s festival saw thoroughly deserving prize-winners in Hou Hsiao-Hsien’s wuxia tale The Assassin and László Nemes’s Holocaust drama Son of Saul, but the Competition as a whole was a rather lacklustre affair, arguably overshadowed by the strength and invention of Directors’ Fortnight. By Nick James.

Cannes: an affair to remember

The likes of Carol and Arabian Nights saw established auteurs on fabulous form, but there were few genuinely unexpected revelations. By Isabel Stevens. 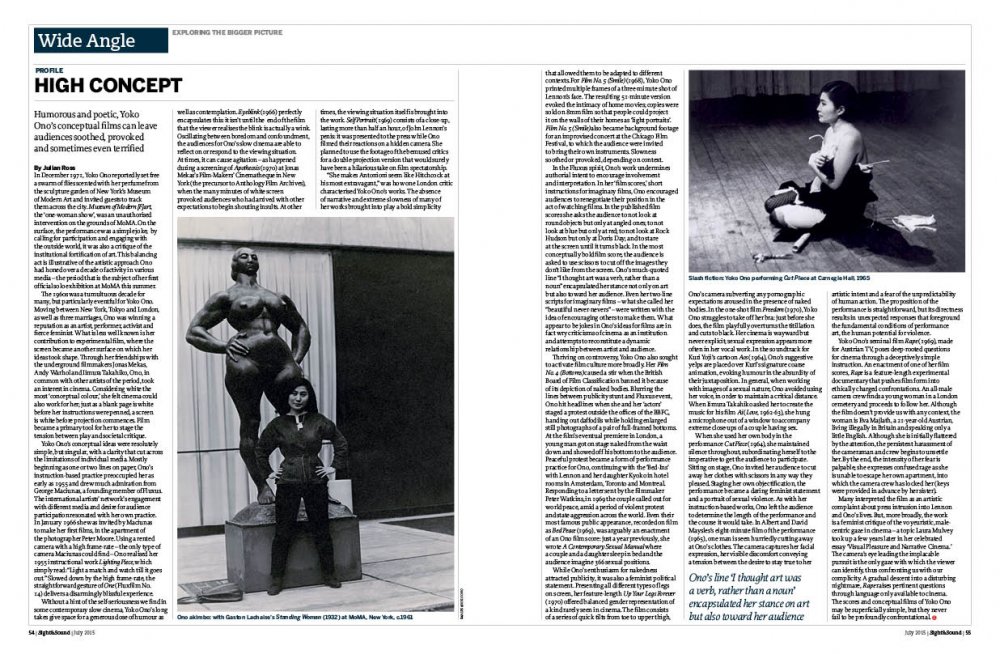 The Family Jams observes a bunch of retro-hippie folk rock musicians on the road – and in two cases, on the verge of stardom. By Frances Morgan.

Familiarity and fire hazards could not ruin the luminous pleasures of the Nitrate Picture Show. By Geoff Brown.

Oberhausen’s Short Film Festival may be approaching pensionable age, but it is still full of youthful vitality and innovation. By Andréa Picard.

Preview: Before the revolution

In the 1970s Parviz Kimiavi was the brightest star in Iran’s New Wave, but since then his films have all but vanished. We’ve been missing out, says Sukhdev Sandhu.

To his manor born: The Long Good Friday / Mona Lisa

Revival: The Strange Case of Dr Jekyll and Miss Osbourne

At once sex-horror and obsessive art movie, Walerian Borowczyk’s extraordinary film offers a unique take on a much adapted classic. By Kim Newman.

Lost and found: The Reckoning

Jack Gold’s 1969 film about a man returning to the working-class north of his childhood is more than just the Liverpudlian Get Carter. By Michael Pattison. 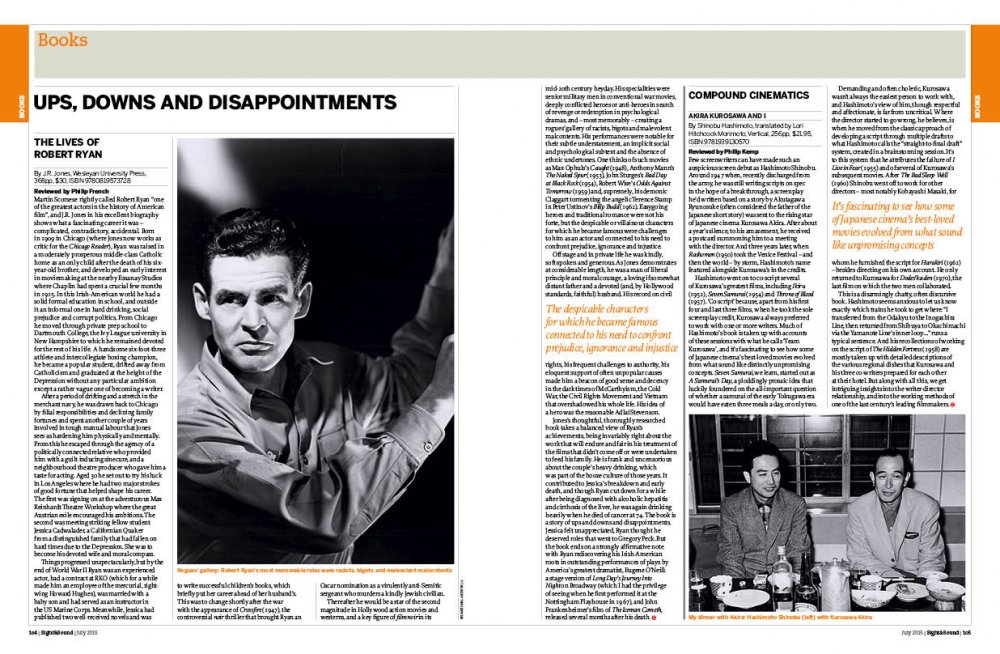 Akira Kurosawa and I by By Shinobu Hashimoto, translated by Lori Hitchcock Morimoto (Vertical) reviewed by Philip Kemp

The nowness of Kiss Me, Stupid
Keeping S&S serious
The Immaculate Conception: the truth
All hail Hannah McGill’s Object Lessons
Remake/remodels of The Birth of a Nation and The Love of Three Queens
The wry amusement of While We’re Young 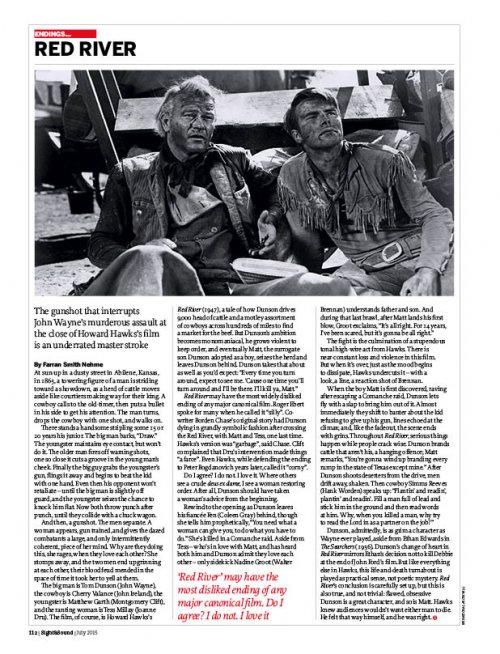 The gunshot that interrupts John Wayne’s murderous assault at the close of Howard Hawks’s film is an underrated master stroke. By Farran Smith Nehme.