Film of the week: Mr. Holmes

Bill Condon and Ian McKellen probe the mystery beyond the mysteries in this deft portrait of a man at the end of his legend. 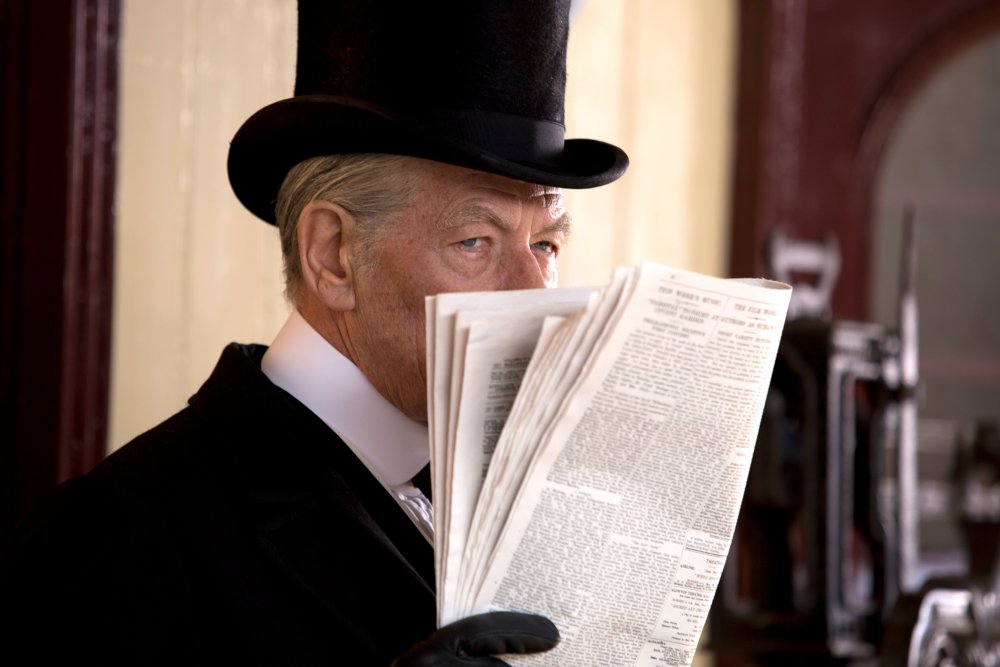 The 93-year-old Sherlock Holmes of Bill Condon’s film version of Mitch Cullin’s novel A Slight Trick of the Mind is haunted by versions of himself – all of which are fake but seem more authentic than the real thing.

We first meet the ageing detective on a visit to Japan, poking around in the ruins of Hiroshima in search of a miracle herb. He disappoints the mother of his Japanese host when – in a melancholy paraphrase of Billy Wilder’s witty The Private Life of Sherlock Holmes (1970) – he sadly admits that he didn’t bring the deerstalker or the pipe of his popular image because they were added by the illustrators of his friend John Watson’s fictionalised accounts of his adventures.

Later, peeling back another layer of reality, he admits that he did once smoke a pipe, but stopped because he felt ridiculous when he looked like the heroic version of himself created and accepted by Watson and the public. At one point he even sits in a matinee audience to watch The Lady in Grey, a plausible film version of a fictional fiction (Watson’s The Case of the Dove-Grey Glove), in which a black-and-white Holmes is played by Nicholas Rowe, erstwhile star of Barry Levinson’s Young Sherlock Holmes (1985).

Ian McKellen plays Holmes in old-age makeup by Dave Elsey by way of Dick Smith circa Little Big Man. It is 1947, and Holmes is living in retirement in Sussex with his housekeeper Mrs Munro (Laura Linney) and her son Roger (Milo Parker), spending his time writing his journal and tending his bees. Young Roger scorns his mother for barely being able to read and delights in the puzzles of Holmes’s cases and his apiary pursuits. Mrs Munro, meanwhile, sees the dangers of such aspirations, since her mechanic husband sought to be promoted out of the motor pool during the war, only to be killed in action as part of a bomber crew. 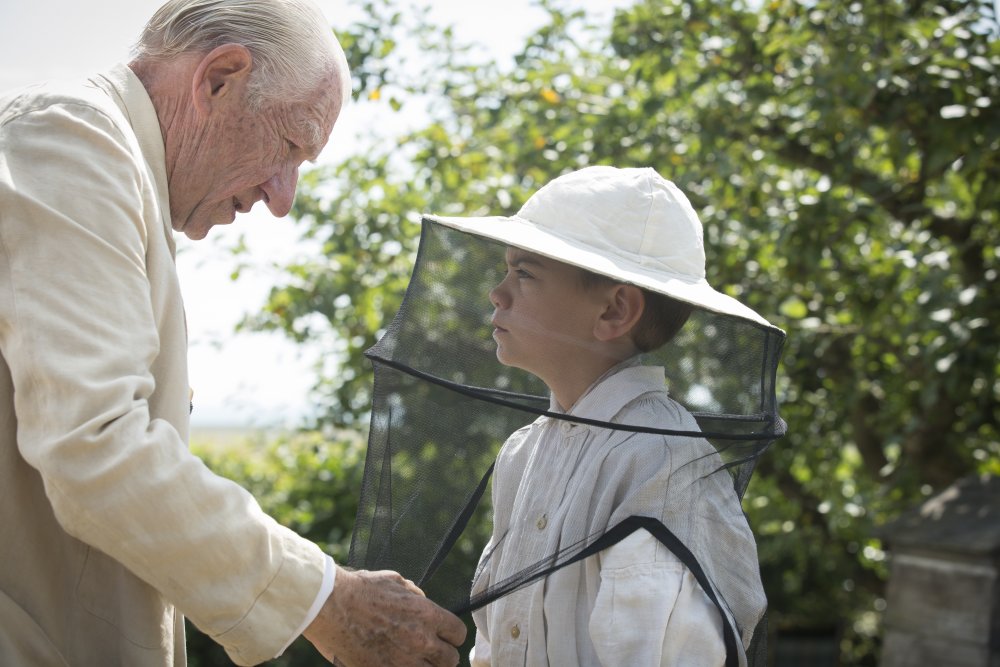 The reteaming of Condon and McKellen, in another story about an elderly genius and a conflicted protégé, evokes 1998’s Gods and Monsters, whereas a moment in which the ancient Holmes contorts himself to assume the pose of the girl in Andrew Wyeth’s painting Christina’s World echoes Terry Gilliam’s film of Cullin’s Tideland (2005), which is to Alice in Wonderland what Mr. Holmes is to Arthur Conan Doyle’s Holmes canon.

There are several mysteries to be solved here – though Holmes’s only real success is in pinning a mass-stinging on some wasps to exonerate his own bees – but the thrust of the story is to question the point of solutions that don’t help anyone. In particular, Holmes reflects on his final case, in which a woman, Mrs Kelmot, seemed to be plotting her husband’s murder but was in fact planning her own death. Holmes saw through the contradictory plot but couldn’t determine her commitment to suicide. Gods and Monsters also hinged on a murder-cum-suicide plot and an ageing genius, the director James Whale, struggling with the loss of his faculties and using his undimmed skills to bring down the curtain on his achievements in style. 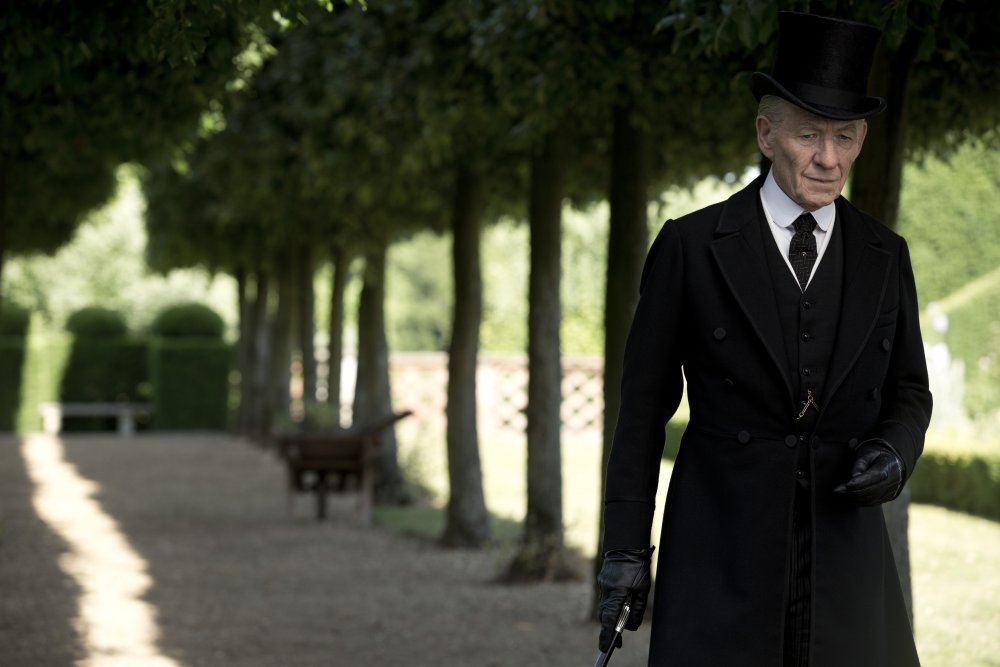 McKellen’s Holmes, repressed where Whale was open, is another awards-worthy performance… although, in representing a frail and fragile human character, he isn’t really playing Sherlock Holmes except when he puts it on (when Roger insists he “do the thing” and rattle off deductions) or makes it up (as in the final dramatised solution to the Japanese case, which incidentally features a perfect micro-cameo from John Sessions as Mycroft Holmes).

There has been a debunking tendency in Holmes films and fiction since Wilder, from the psychological reductionism of Nicholas Meyer’s The Seven-Per-Cent Solution to the depiction of the great detective as a high-functioning sociopath or Chaplinesque scruff in recent TV and film versions. But Mr. Holmes plays a subtler, more affecting game while retaining a fondness for Doyle’s characters and their depths – note the perfect, wordless reaction of a tea-bearing Mrs Hudson (Sarah Crowden) as she overhears her employer blithely assuring Mr Kelmot that his wife’s miscarriages oughtn’t to have upset her too much.

Related to Film of the week: Mr. Holmes