Who can solve the mystery of the missing Sherlock Holmes film?

The game is afoot as we begin an international hunt for a lost film version of Arthur Conan Doyle’s A Study in Scarlet. 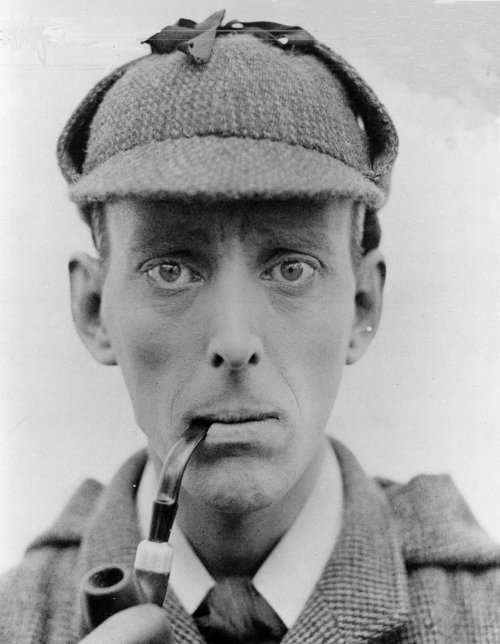 We’re calling on ‘detectives’ around the world to see if they can help us discover a copy of the world’s first ever feature film starring Sherlock Holmes. High on the list of the BFI’s Most Wanted films, A Study in Scarlet was released 100 years ago this autumn and hasn’t been seen in generations.

The silent film was directed by George Pearson, whose 1923 film Love, Life and Laughter was discovered by EYE, the Dutch film archive, earlier this year. It’s an adaptation of Sir Arthur Conan Doyle’s story A Study in Scarlet, which concerns a fictional murder that takes place on Brigham Young’s trek across America with his Mormon followers. Sherlock solves a series of murders through masterly deduction.

Can you help us solve the mystery of the missing film?

This call-out coincides with a landmark exhibition on the consulting detective, and the city which inspired the stories, at the Museum of London, opening 17 October.

“The long filmic history of Sherlock Holmes is unique,” says Alex Werner, curator of the Museum of London’s Sherlock Holmes exhibition, “dominating popular culture in a manner only to be rivalled perhaps by Dracula or Frankenstein. As we prepare for the museum’s major exploration of the most famous fictional Londoner of all time, it would be a remarkable achievement to discover this missing film in its centenary year, and at the very least, remind the public of Sherlock’s endurance on-screen, interpreted literally hundreds of times for over a century.

Bryony Dixon, curator, Silent Film, BFI National Archive adds: “Every archivist dreams of finding lost films. But this is a film of great importance. Sherlock Holmes is internationally renowned as a great detective. It would be wonderfully appropriate if a super-sleuth could help us celebrate the centenary of this film with a chance to see it.”

A Study in Scarlet was the first film director George Pearson made for the Samuelson Manufacturing Company.

The casting of Sherlock Holmes was a challenge, as it was for filmmakers before and since. As Pearson recalled in his autobiography, “much depended upon his physical appearance, build, height, and mannerisms,” and it was important to find an actor who could live up to the general public’s idea of the great detective.

By luck, one of Samuelson’s employees fitted the bill. James Bragington was not an actor, but Pearson was confident that he would be able to control his performance sufficiently. He was pleased with the results and felt that Bragington had played the part ‘excellently’ (all the same, A Study in Scarlet is Bragington’s only known film credit). When the Samuelson Company made a second Holmes adaptation, The Valley of Fear, two years later, the stage actor H.A. Saintsbury was cast in the role of Holmes.

Where and when was it made?

A Study in Scarlet was shot at Worton Hall studios and on location in the summer of 1914. Cheddar Gorge in Somerset and Southport Sands in Merseyside stood in for the Rocky Mountains and the Utah plains. Reviewers praised Pearson’s clever handling of the film’s settings, finding the opening scenes of the Mormons crossing the desert “very beautiful”.

Near simultaneously and entirely separately, an American version was made with the same title by Francis Ford. This version was released in December 1914 but is also missing. And it is not alone, Pearson’s second Holmes film, The Valley of Fear (1916), starring H.A. Saintsbury, is also missing.

What to do if you find it: contact Sherlockholmes@bfi.org.uk or via social media using #findSherlock 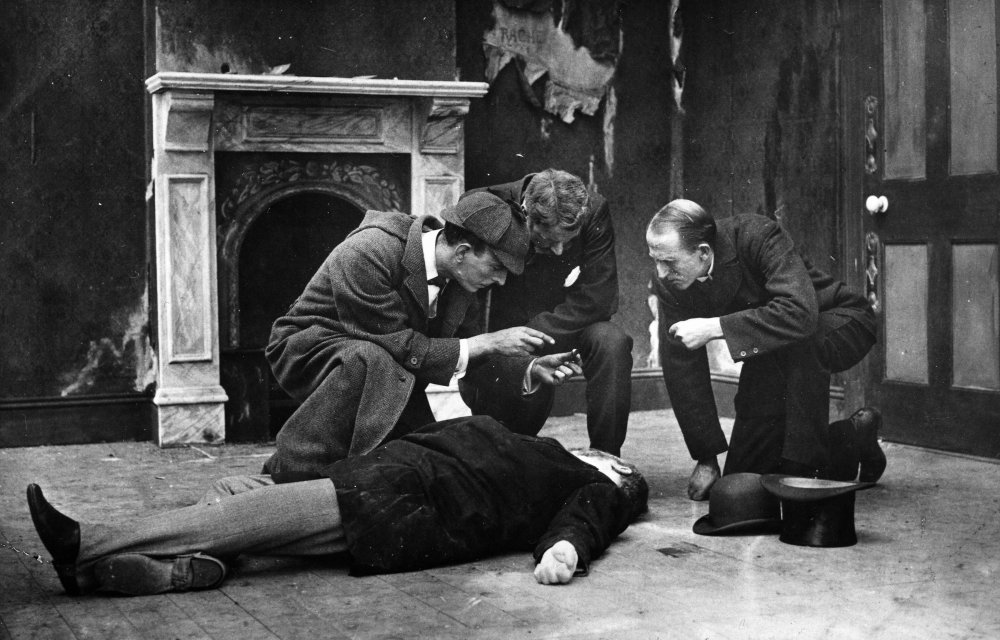 A contemporary review from the Kinematograph Monthly Film Record, November 1914

It is a truism to say that Sherlock Holmes is always welcome on the screen. The few film adaptations to be seen of Conan Doyle’s great series are, we believe, immensely popular with all classes of people, and there are certainly a great number yet of those famous detective adventures which might be turned into pictures with advantage. Personally we do not think that either the “legitimate” drama or the picture drama can recapture for us the first fine careless rapture we felt when we came upon these stories in their original version. But we are firmly of opinion that in visualising what is, at its finest, a purely literary pleasure, viz., a high-class detective yarn, the screen has hitherto proved itself a superior medium to the stage.

“A Study in Scarlet,” the latest production of the Samuelson Film Co. which was shown to the Trade by the Davison Film Sales Agency, though not quite one of the best of Holmes’ exploits, is decidedly one of the best of his creator’s novels, and the producers have, without question, made the best of it. It is in six reels and runs for about an hour and a half, but hardly at any point could we wholeheartedly advise compression, because, even where not materially aiding the story, every scene is interesting for itself and holds the attention enthralled.

We fancy this drama will, in the long run, attract the public, not for anything that Sherlock Holmes himself does (as a matter of fact he only appears in the last two reels) but for its striking pictures of life among the Mormons. The religious ritual and social tyranny of these people are presented in a series of original and memorable scenes. Sir Arthur himself made much of this part of the book, and it is only the barest justice to say that his adaptors have succeeded admirably, not merely in the “property” and photographic elements, but also in suggesting the close, stuffy atmosphere of the Mormons’ creed combined with its flagrant freedom in another sense.