An encounter between the nonfiction jammer behind The Look of Silence and the mashup reporter who made The Power of Nightmares prompts the question: must cinema and fact make uncomfortable bedfellows? 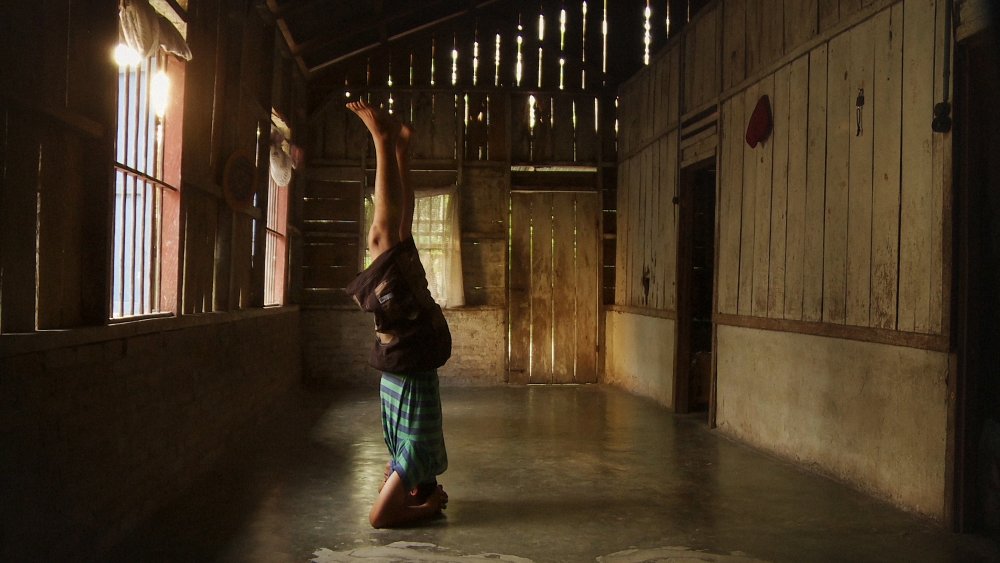 I flunked several journalism courses as an undergraduate and I’ve become a nonfiction filmmaker who spends his time trying to push beyond conventional ideas of reportage, yet I’ve recently taken a teaching position at the University Missouri in the oldest journalism school in the world. So my career is just another embodiment of the deeply contradictory question at the heart of documentary cinema: are we artists or are we journalists?

The art-versus-journalism quandary may be as old as the form itself, yet the debate over how to best describe what we documentarians do continues today. At Sundance this past January, Academy Award-winning documentarian Morgan Neville stated his position firmly: “So often when people talk about filmmaking, documentary filmmaking, they talk about it as being an artist. I get uncomfortable with terms like that. I feel like I’m a journalist at heart.”

This is unsurprising, of course. Robert Drew and his cohorts revolutionised the form in the 1960s by trying to make what he called a “new kind of journalism”. Filmmakers have long sought freedoms and protections that journalists consider sacrosanct, including recent pushes by filmmakers such as Laura Poitras and Joe Berlinger to garner first-amendment safeguards and institutional support for our work. We documentarians have long leaned on the pillars of the free press and indeed many of us have outright assumed the role, creating films that have investigated vital issues or explored otherwise underreported stories.

If you listen to Neville, though, you may detect a subtle hint of wariness in his voice. That may be because in the last decade or so, more and more documentarians have begun to call themselves artists first and foremost, defining their work in terms that may make some journalists feel less than comfortable.

Nor is this self-definition a new phenomenon. Just take a look at the decades-spanning lineup for the Film Society of Lincoln Center’s annual boundary blurring showcase Art of the Real, for one of many examples, to see how longstanding the idea of the artist-documenter really is. But with the technological transformation of documentary production in the past 20 years giving more kinds of filmmakers with different cinematic interests the chance to make nonfiction, many have turned against perceived orthodoxies of the form.

This has lead to a new generation of art-first nonfiction filmmakers who are less interested in reporting facts, as it were, than they are in making reality-based experiments in cinematic form, deeply exploring character interiorities or altogether breaking the accepted ‘rules’ of documentary. This trend seems to have sparked a bit of a backlash in the admittedly narrow circles of nonfiction film culture, which I think one can detect in the way Neville expresses his thoughts on the matter in the snippet above. The recent push by some in the documentary world to have what we do be considered primarily acts of ‘art making’ has seemingly re-energised this perennial debate.

If you’ve ever read this column, you’ll know that I’ve attempted to be one of those voices trying to define documentary primarily as an art form. My writings and my own films have been directed towards this debate and I’ve spoken as forcefully about it as I can. At the same time, beginning in August, I’ll be teaching journalism students to make movies in my new position as Filmmaker-in-chief (real title) of the new Murray Center for Documentary Journalism. So the question of framing what I do is incredibly personal to me. Lately, though, I’ve come to wonder how useful this question really is. Is ‘journalism’ really the cage I’ve characterised it as, from which we filmmakers need to break free? 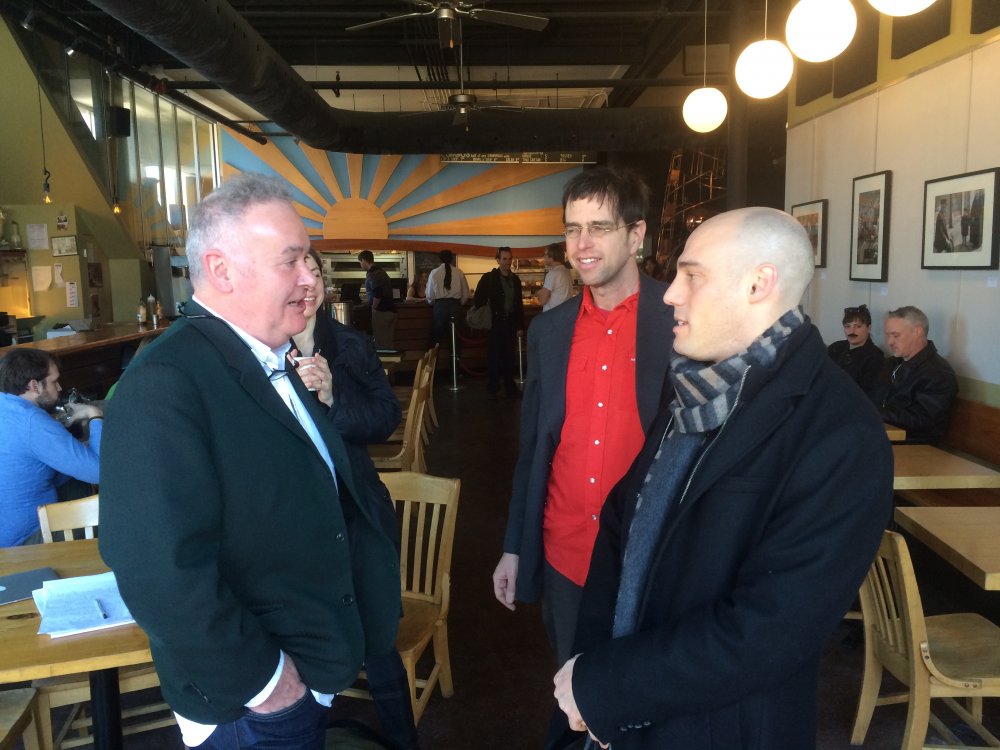 All of this was on my mind last month when I attended a talk in London between one of the most vocal leaders of the art-documentarian generation, Joshua Oppenheimer, and a man who strictly identities himself as a journalist, Adam Curtis. The occasion was the release of Oppenheimer’s The Look of Silence, his follow up to The Act of Killing, which is an unnerving, patient, profoundly cathartic study of place, politics and the psychologies of living under the rule of murderous oppressors.

Oppenheimer and Curtis are two of my favourite filmmakers, having each produced some of most exemplary nonfiction work in the last several years. With his latest film, Oppenheimer solidifies his reputation as perhaps our finest interventionist, building on the radical aesthetic and political gambit of his breakthrough to create an intensely moving piece of art cinema. Meanwhile Curtis, who has made many vital works of expressive political inquiry for the BBC including major films like The Century of the Self (2002) and The Power of Nightmares (2004), continues to push his own formal boundaries with the expansive and strangely beautiful Bitter Lake. 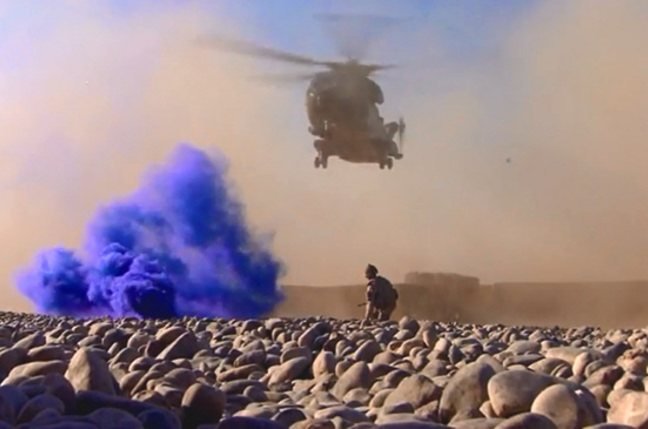 It’s interesting, then, that they define what they do so differently.

First we have Oppenheimer, an American-born, Harvard-educated intellectual living in Copenhagen, who went from studying theoretical physics to creating political street theatre to making two of the most talked about documentaries of recent memory. He says that while journalism is meant to “uncover vital new information in the public interest”, art “should invite, seduce or force us to confront the most difficult, frightening or mysterious aspects of what it means to be human.”

It’s to the latter end that he has tipped his hat to the soundcapes of Ozu and Bresson rather than, say, the roving camerawork of the Maysles or Wiseman. Indeed, The Look of Silence features otherworldly, layered constructions of sound and image which push considerably past standard ideas of documentary reality. He is in the vanguard of a movement towards artful, complex cinematic nonfiction, becoming perhaps our most eloquent speaker on the subject. 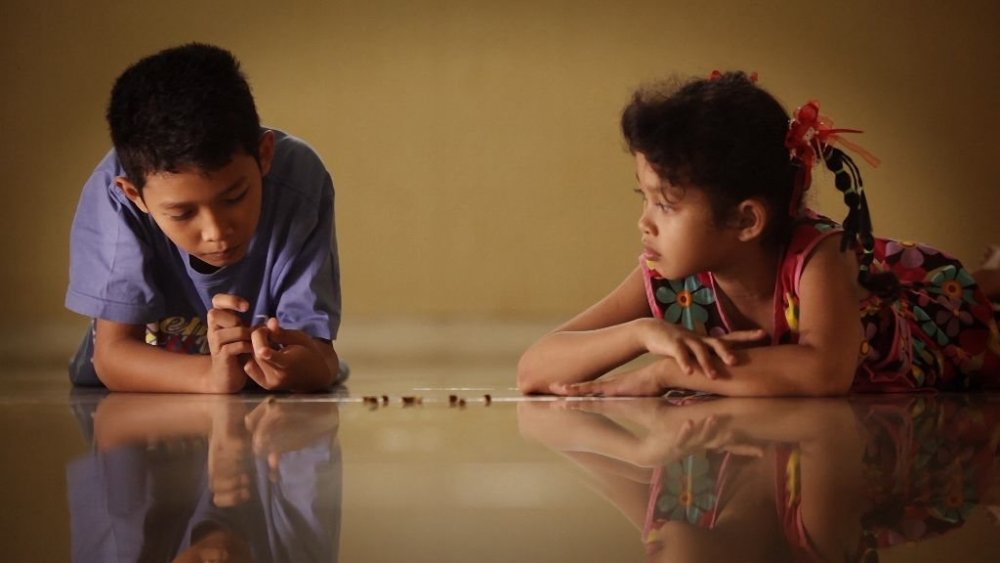 In the opposite corner we have Curtis, the British-born, three-time BAFTA award-winning montage specialist who creates seductively-rendered meditations on power and its relationship to the individual out of scraps from the BBC archives (he’s reportedly allowed to use whatever he wants from their vast library of clips), canny uses of pop music and voiceover that he writes and performs himself. In recent years he’s begun expanding his work to include mixed-media installations (It Felt Like a Kiss, 2009), theatrical performances (Massive Attack vs Adam Curtis, 2013) and now multi-platform, digital distribution with Bitter Lake, which was made specifically for the BBC iPlayer.

He solely considers himself a journalist, who happens to be working in the realm of moving images. His chosen medium is television, which he thinks is the best way to communicate his messages to as many citizens as possible. At True/False this past March he delivered a lecture on the hollowness of broad political narratives and the need for radical new ways to tell stories, but downplayed his own considerable formal inventiveness, deadpanning that he simply spends his time “cutting up images of the past and playing them to people on television.” He finds all talk about the relationship between art and journalism to be dull and distracting, and has what seems to be a deep antipathy toward self-described ‘artists’, recently disdaining those in the avant garde as “boring, chilly and rather nasty people”, though allowing that “their techniques are interesting”. 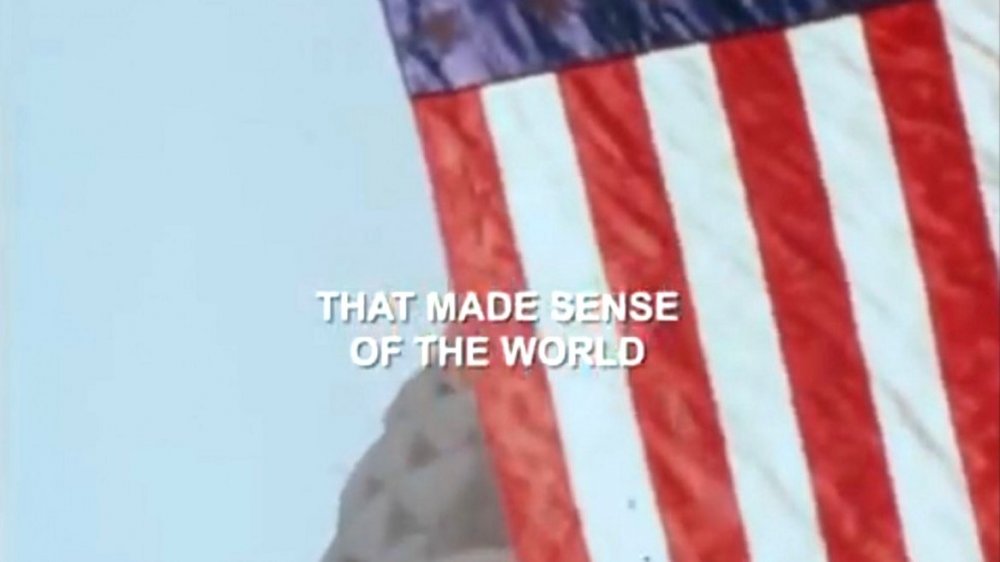 Onstage, their rapport hardly reflected any fundamental disagreements. Sharing Q&A time with The Look of Silence’s main protagonist Adi (with his translator), their dialogue was productive and even a bit reserved, despite the fact that their filmmaking philosophies could not come from more extreme ends of the art-journalism spectrum.

Occasionally Curtis dipped his toe in the waters, describing Oppenheimer’s work as a kind of antidote to what Curtis believes is the shallow, propagandistic coverage of world politics by what he refers to as the “liberal media”. Curtis basically described The Act of Killing as radical journalism, meant to paint a more complex portrait of atrocity by asking us to empathise with murderers, and wondered if The Look of Silence was a kind of retreat from this way of seeing. Oppenheimer though hardly took the bait, instead remaining focused on his own filmmaking philosophies, even while making it abundantly clear that he doesn’t consider his work ‘journalism’ in any strict sense.

These brief flare-ups notwithstanding, it was a deeply respectful discussion, to the point that I was even a bit disappointed. I don’t know why I was expecting – if not hoping – for sparks to fly, but the onstage congeniality did allow me space to reflect more deeply about the true nature of this art versus journalism question. Are art practices (which might be described as privileging ambiguity and personal expression over ‘reporting’) and journalistic practices (privileging facts, context and clarity) essentially incompatible? Or is this all semantics? 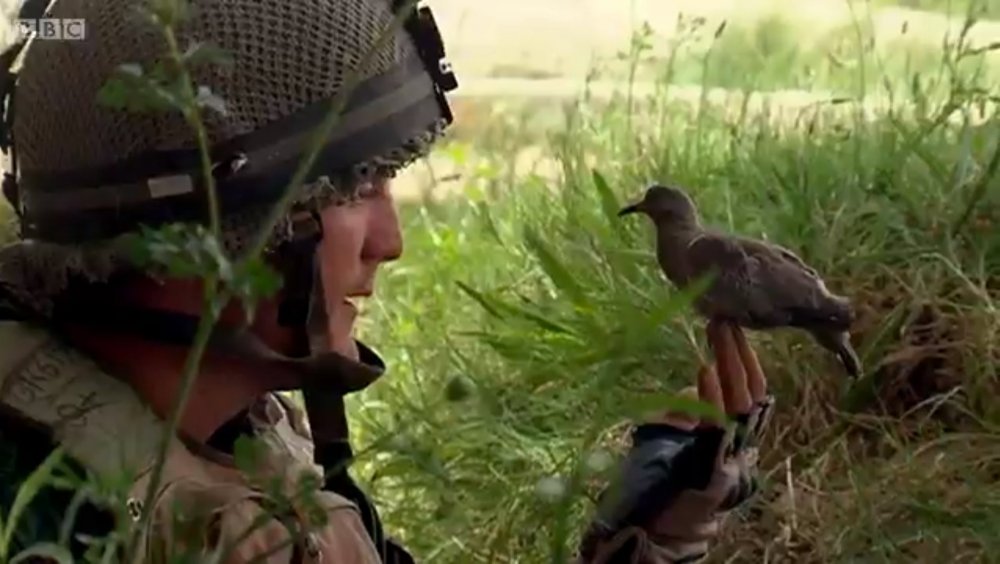 I think it comes down to how we define ‘truth’ in nonfiction cinema and the repercussions of its slippery nature. We all know that ethics and aesthetics collide in documentary films in a way that distinguishes them from most other forms of art. This energises what we do – giving shape and structure to messy, often contradictory realities – with a rare degree of sensitivity, to which we must be constantly responding. Defining oneself as a ‘journalist’ is a kind of armour that allows you to project a sort of ethical stability to your viewers and the world at large. Conversely, defining one’s work as ‘art’ might best be described as an attempt to give you the space to explore, construct, stage, edit, modify, destroy or embalm the materials you’ve been given privilege to capture as we see fit.

“Every documentary filmmaker has to confront the question of ‘what is the truth’ and how that truth is also being crafted and shaped and changed to serve a narrative,” said Poitras when I interviewed her recently. “There is a tension there and there are certain things I think you can’t do or that you shouldn’t do. It wouldn’t be good to pretend elections happened on a different day than they actually happened, for example. I always feel that we are crafting narratives but we’re also doing journalism and I see it as being additive. It’s journalism plus narrative storytelling, not one negating the other.”

Framing the work matters, obviously. If one were to view, for example, Oppenheimer’s The Look of Silence primarily as a piece of journalism, what does one do with all those strange decisions he makes such as the guiding narrative device of semi-staged confrontations, or even his use of an incredibly expressive, mood-creating soundtrack? Are these aesthetic decisions, which essentially define the work, breaking journalistic rules and therefore to be discounted or condemned? 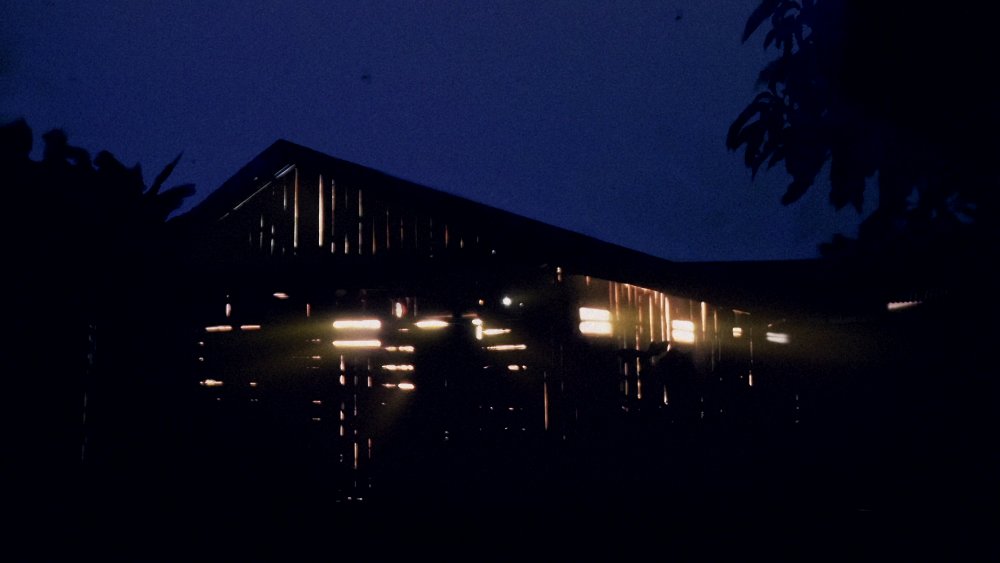 At the same time, if one considers Curtis’s All Watched Over By Machines of Loving Grace (2011) strictly as a piece of art, does it become too easy to dismiss the sometimes absurdist adages on which he builds his arguments as ‘simply’ personal expressions, rather than attempts to transfer crucial bits of knowledge to general audiences?

These questions of context do of course change the work and how we engage with it. Nevertheless, I think the framing – which can so easily slip into a parlour game of false dichotomies, which is where I came in – matters less than trying to forge an understanding of nonfiction cinema as an art form of ‘additives’, as Poitras elegantly describes it. It’s a dialectical tension, and precisely what makes documentary cinema so arrestingly unique.

Let the questions come, filmmakers. Let viewers wonder if what you’re doing is too stagey or too adherent to reality, too much cinema or too much fact. Let them question it all, because in that engagement stories and ideas can be pushed dynamically forward. Your job is to make work that embodies these contradictions, rather than trying to answer the unanswerable. Instead, let’s revel in the indescribables.