Alive and spinning: Only the Young

Robert Greene on why a gentle portrait of three skateboarding California teens marks the cutting edge of nonfiction cinema.

It’s no surprise that films about teenagers and children often make for the most exciting cinema. Movies are best at their friskiest; observations of teenage verve, awkward self-doubt and innocence/ignorance tend to burst into brightness onscreen. A great film about the young often finds its power in universality, allowing viewers to superimpose their own experiences onto the images in front of them. We see what we are in these films.

That Only the Young, the debut nonfiction feature from California-based filmmakers Jason Tippet and Elizabeth Mims, has come to mean so much to a growing movement of new documentary filmmakers and viewers is probably no surprise, then. Impossibly light on its feet and sweet in its disposition, the film is as seemingly unambitious as its lingering trio of protagonists. But just like its characters, Only the Young is full of ideas about how to see the world and how to express what we see. As an example of the new cinematic nonfiction, the film has become a poster child; its delicate observations and poetics have given us a chance to see what we want to be.

Only the Young had a successful festival run after debuting at the 2012 True/False Film Festival. It was named one of the top documentaries of the year by the National Board of Review and nominated for an Independent Spirit Award before being released in theatres and on DVD in the US. It received mostly positive reviews, but many of the biggest outlets including the New York Times and Los Angeles Times seemed to miss what made the film special to its fans. This disparity between the reaction from the documentary world and some of the biggest mainstream press made the film a bit of a rallying point for those that argued that a new critical focus was needed for nonfiction.

The movie opens with an image that immediately conjures the nostalgia/present-tense dialectic that Tippet and Mims are after. Lying next to each other on the floor, at first upside down to the viewer, Skye and Garrison introduce themselves and their relationship with a perfect dose of teenage philosophy. “I’m stuck in your black hole,” Skye pronounces. “You couldn’t get rid of me if you tried.” The image is a little John Hughes and a little Larry Clark, visual references that, combined with the lovely economy of the opening scene and the mythic slo-mo-soulful credit sequence that follows, perfectly set the film’s tone and cinematic animus. 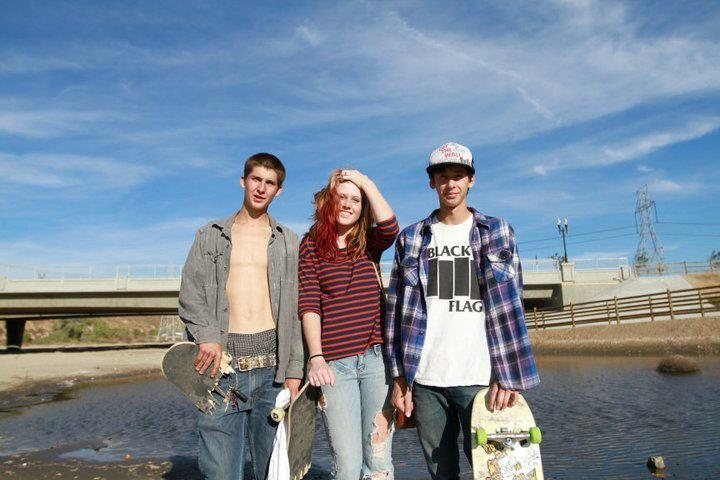 We soon meet Kevin and our trio of heroes proceed to skateboard, have crushes on each other, walk around shuttered golf courses, jump off things, clean pools for extra cash, volunteer for a fundamentalist Christian charity group, etc. (That this last activity doesn’t function as a scandalous plot twist is a great example of the film’s generous and non-dogmatic way of seeing.) The 70 minutes we spend with these charismatic teens flows as if we were invited into their clique. The dialogue is intimate and thoughtful, a little like reading the journal entries of especially articulate children. Skye, in particular, exhibits a surprising, deeply felt wisdom that makes her one of the most engaging characters in recent memory.

The film is funny and sweet, easy to like and lovely to look at. It has been described as a movie where “nothing much happens,” though, and it could be seen as overvaluing its own gentleness. Beneath the easy-going surface, however, Only the Young is as formally accomplished as any of the seemingly more ambitious documentaries of the past few years. If one uncovers its distinct rhythms, a vital work of cinematic nonfiction emerges.

The term ‘cinematic nonfiction’ might be a slightly clunky contrivance, but it serves a specific purpose in defining how to see this new type of film. When compared to other documentaries, Only the Young may seem slight, lacking context or the kind of political focus and frenetic pacing that audiences have come to expect from the d-word. These are not absences, of course, but aesthetic and storytelling decisions.

Yet many critics still seem to lack the vocabulary (or interest) that would help describe what’s happening in much of the daringly free nonfiction movie-making that is currently happening throughout the world. (Fictional art cinema, on the other hand, has a long-established history of critical engagement and support.) So let’s break down ‘cinematic nonfiction’ and see how it applies here. ‘Cinematic’ is simply the valuing of a film’s movieness. In Only the Young, the use of slow motion, for example, is not meant to create drama artificially (as the device often functions), but is instead used to extend small, everyday observations into abstractions, evoking a sense of adolescent memory. This valuing of the visual over the narrative elevates the ‘captured reality’ onscreen. 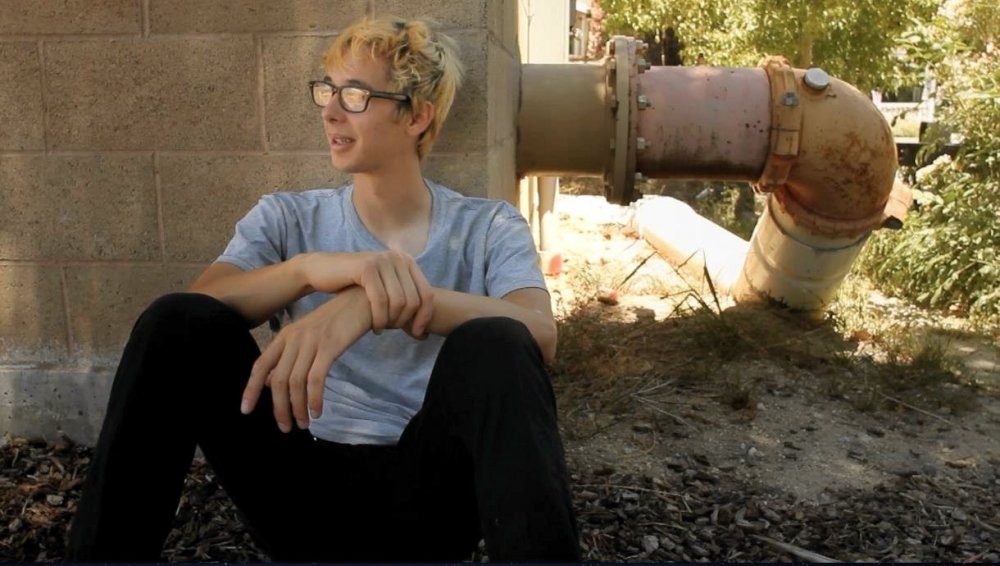 Most importantly, though, the ‘cinematic’ is an adjective for ‘nonfiction’. One of the most striking things about Only the Young is that it’s primarily an interview-based film, therefore using probably the most maligned aspect of typical documentary filmmaking. Yet the ‘talking head’ segments are not there coldly to communicate facts, as they often do in nonfiction, but instead function as intimate character-creating set pieces. The subtle presence of the filmmakers and the ways in which Skye, Garrison and especially Kevin perform their identities for the camera, all in fairly standard interview setups, gives the film its distinct energy. In other words, traditional nonfiction strategies are employed in startlingly cinematic ways, making the film feel like something new.

The unique storytelling is most potent in one incredible scene that takes place in the movie’s first third. In the film’s trademarked two-character interview setup (with perfect light), Garrison admonishes Kevin for cutting his arms violently as Skye watches off screen. Kevin plays defiant victim for the camera, the filmmaker and his friends, asking why they hadn’t noticed the nasty cuts before. Just when Garrison’s sincere urgings to stop the obvious attention-seeking behaviour have Kevin reeling a bit, he subtly lashes out with a revelation that undercuts the trio’s friendship and transforms their delicate dynamic. Skye reacts badly and it cuts away suddenly to an extremely wide shot of her running away, up a steep hill. She’s clearly upset but silence dominates the moment.

That Kevin did this for the camera is immediately clear, hurling their lives and the film’s momentum in unexpected directions. This sudden mingling of real and movie life is complex and electrifying. The way Tippet and Mims play it, giving respect to the weight of the teenage emotions on display, while subtly revealing the transience and volatility of those feelings with clean, underplayed editing, turns the captured moment into a powerfully universal scene. 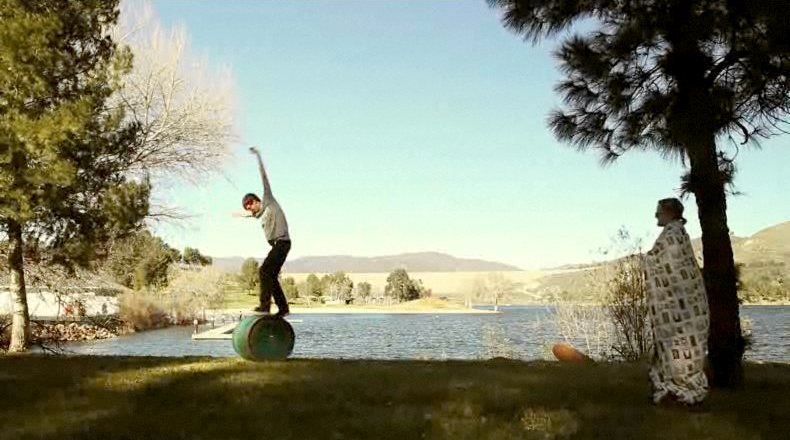 The film is full of such delicate dances. Much of the fun comes from observing the characters work their way into and out of the same painful situations we have all experienced, while watching the filmmakers translate their intimate footage into meaningful, emotionally developed movie scenes. This interplay of reality and construction is at the heart of the most exciting nonfiction and is used evocatively here. The ideas in the film are masterfully submerged beneath a calm, forgiving surface that allows the wit and charm of the characters to shine. The effect is lovely and moving.

Films about teenagers encourage us to find ourselves inside them. Only the Young is certainly a film to get lost in. But a closer look reveals not just an easy trip into nostalgia or a slight, sweet excursion, but a formally inventive work that exemplifies the new spirit of cinematic nonfiction. Tippet and Mims’ film is one of the best of this new breed of documentary being made all over the world. Let’s lose ourselves in the future it represents.