Film of the week: SPECTRE

After 007’s recent dark nights of the soul, Bond 24 lets some light back in – from the spy’s own psyche to the politics of Whitehall sub-contracting. 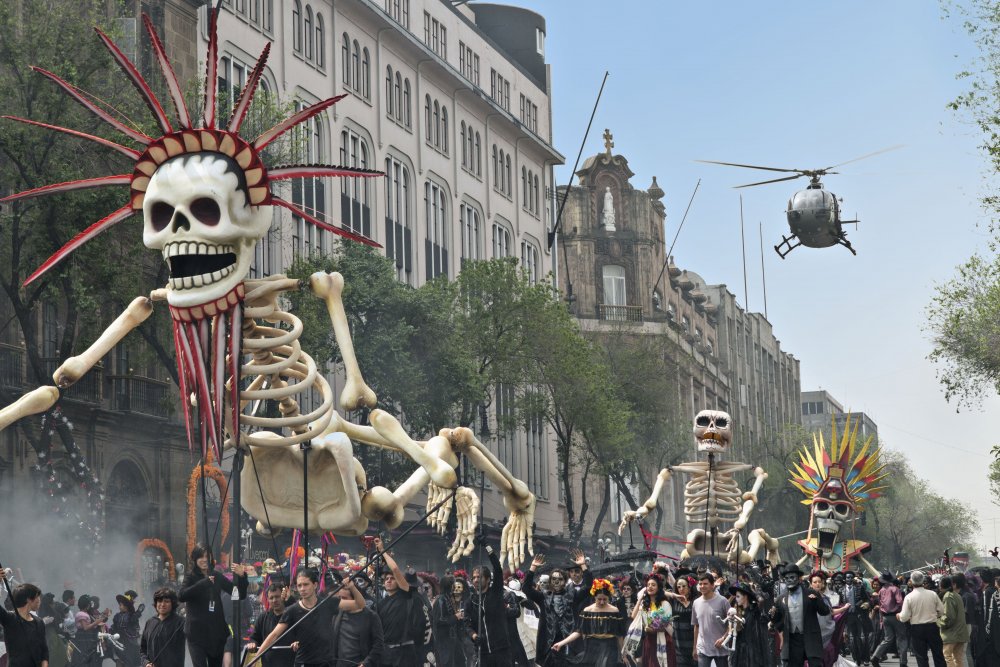 Daniel Craig’s first three films as ‘Ian Fleming’s James Bond 007’ – Casino Royale (2006), Quantum of Solace (2008) and Skyfall (2012) – constitute a reinvention of the venerable spy franchise for the 21st century. This new entry, directed by Skyfall holdover Sam Mendes, pulls together plotlines from all three films to set in motion what might be seen as Craig’s first routine assignment as Bond.

Casino Royale, which went back to Fleming’s first novel for its plot and general air of ruthlessness, showed Bond on his way to becoming the emotionally numbed, super-competent gambler/detective-cum-assassin hero through a clash with his first significant villain, Le Chiffre (Mads Mikkelsen, whose image pops up here along with other faces from the past), and the loss of Vesper Lynd (Eva Green), the woman who touched then hardened the philanderer’s heart. Fleming reworked this trauma in On Her Majesty’s Secret Service by having Bond fall in love again and get married, only for his arch-nemesis Blofeld to murder the bride just after the wedding. The films didn’t quite get this arc right, making You Only Live Twice (1967) before On Her Majesty’s Secret Service (1969), so that Bond seemed to take vengeance before the outrage that made his crusade personal; the series’ first change of lead actor also isolated the murder of Mrs Bond from the ongoing character arc.

With Craig, the series has not repeated that error: the loss of Vesper still haunts this version of Bond. Four films – and one Olympic opening ceremony cameo – later, he shudders to find a VHS cassette of her interrogation in the abandoned office of Mr White (Jesper Christensen), last survivor of the Quantum plot that wove through Casino Royale and Quantum of Solace. Skyfall then delved deeper into Bond’s past than any other film, and had him confront some of the issues responsible for traits of Fleming’s character (self-hating, alcoholic womanising and suicidal recklessness) which most film Bonds have done without. In blowing up his childhood home and killing his twisted doppelganger Silva (Javier Bardem), Craig’s version of the hero could purge these elements from his make-up, enabling the series to continue without Bond spiralling into the despair of Fleming’s last, amazingly dark novels. Though memories linger, Craig is here jauntier and lighter on his feet and sometimes might even be thinking about making those post-enemy’s-death quips that have been phased out on his watch. 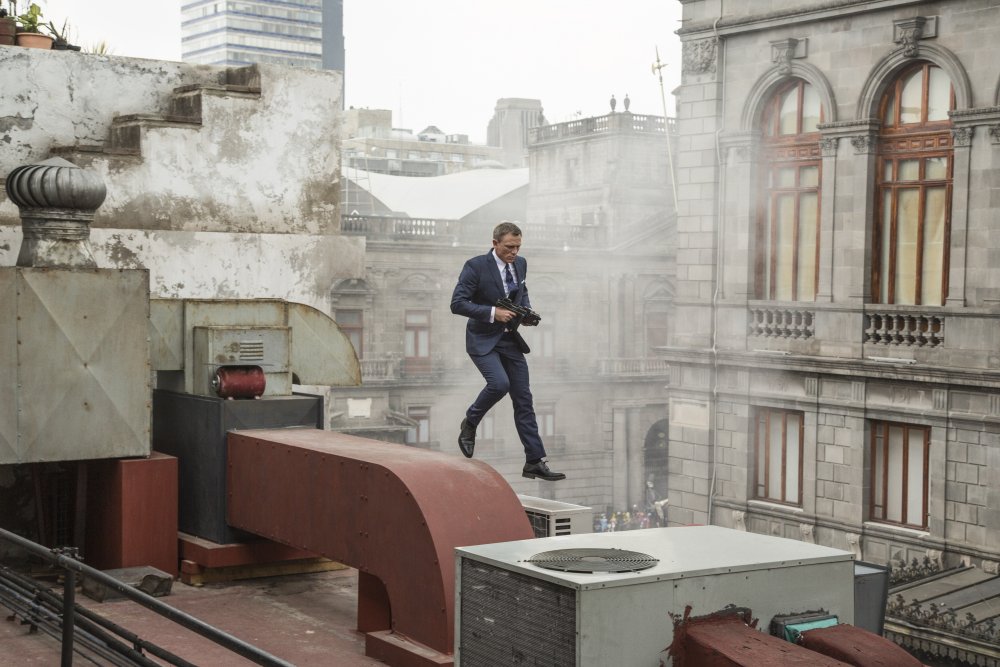 Having developed a Bond in line with Fleming’s thrill-seeking burned-out case, SPECTRE is determined to have more fun with him. Flashes of the high-living, hard-loving Bond of the earliest films and Fleming’s mid-period novels were allowed in the earlier Craig films, but here they are set free. While taking hard knocks, Craig’s Bond seems to be enjoying himself more – he even allows for the notion Connery and Moore had that the character is aware of his own absurdity and plays up to it. He shoots prospective assassins with panache, finally gets the hang of outlandish spy gadgets (including a classic car accessory and a watch with a “very loud” alarm) and allows himself to be enraptured by passing beauties in a manner that even pokes sly fun at his morbid strain of erotomania (he picks up Monica Bellucci at the funeral of her husband, whom he killed).

In the ongoing plot, Quantum, who were (in a modish for 2006-08 touch) super-evil bankers, has evolved into SPECTRE (a 60s revival, introduced in the novel Thunderball and the film Dr. No (1962)). In a neat circularity, the octopus-logoed purveyors of surveillance tech to all comers are fomenting acts of false-flag terror to persuade nation-states to invest in more and more spying.

Again, there’s a sense of headlines being skimmed for subtext. M’s smarmy, ambitious superior C (Andrew Scott, Moriarty from the BBC’s Sherlock) wants to discontinue ‘the 00 programme’ in favour of drones and satellites. Even the arch-spymaster M – Ralph Fiennes is interestingly less manipulative, more direct than Judi Dench – has qualms about what this means for democracy and public service. The film almost criticises current government policies, M expressing distrust of the private finance initiative that has enabled C to move out of the edifice Silva bombed in Skyfall into a modish glass-and-steel structure (all that glass is eventually one major villain’s downfall). The best-timed quip in the film comes when tables are finally turned in this sub-plot and Fiennes concludes “Now we see what C stands for… careless.” 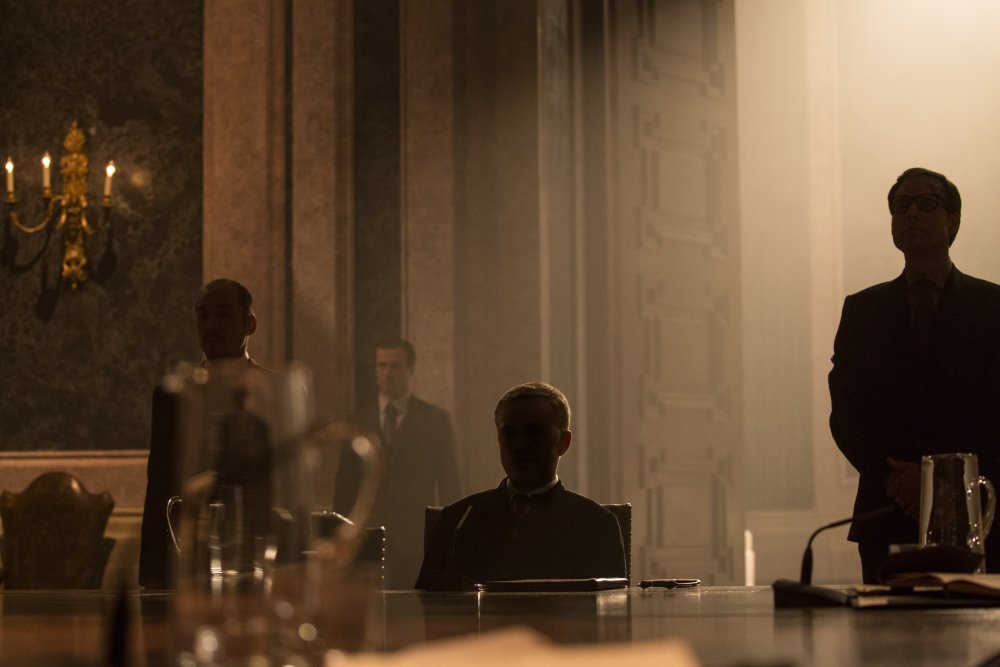 Whether taken as the fourth entry in a decade-old series or the 24th in the saga which began with Dr. No, SPECTRE faces the tension between a need to innovate and a requirement to keep on track. The accumulation of backstory means some obligatory developments verge on the ridiculous. One of the subtler cruelties the arch-baddie (Christoph Waltz) inflicts on Bond is that he lets the hero’s current love interest – Léa Seydoux, given the peculiarly Proustian character name Madeleine Swann – read up on what happened to his last four girlfriends (like his surrogate mother, all were murdered in previous films). Seydoux’s narrow-eyed doubt is her best moment in a film that rather short-changes its female characters. Though she won few fans at the time, it now seems that Craig’s most effective previous female partner (significantly, not a romantic one) was Olga Kurylenko’s vengeful Camille in Quantum of Solace, who wisely stayed out of his bed and heart and consequently got out of their adventure alive. Meanwhile, Naomie Harris, who took up Moneypenny’s thankless job in Skyfall, has to jostle for attention with Ben Whishaw’s Q stealing every scene he’s in (Q seems to flirt with Bond even more than Moneypenny does), Fiennes showing his own brand of posh British toughness and Rory Kinnear, who’s around to provide extra exposition.

Recent Bonds have tended to place the gunsight pose in the end credits. This one opens with the iconic image, then segues to the Day of the Dead in Mexico City via a long-held shot of 007, in and out of a skeleton suit, pursuing a villain through the throng, in, out and over buildings. The breathtaking manner evokes the similarly Latin American-themed stand-out shots of Touch of Evil (1958) and The Secret in Their Eyes (2009). 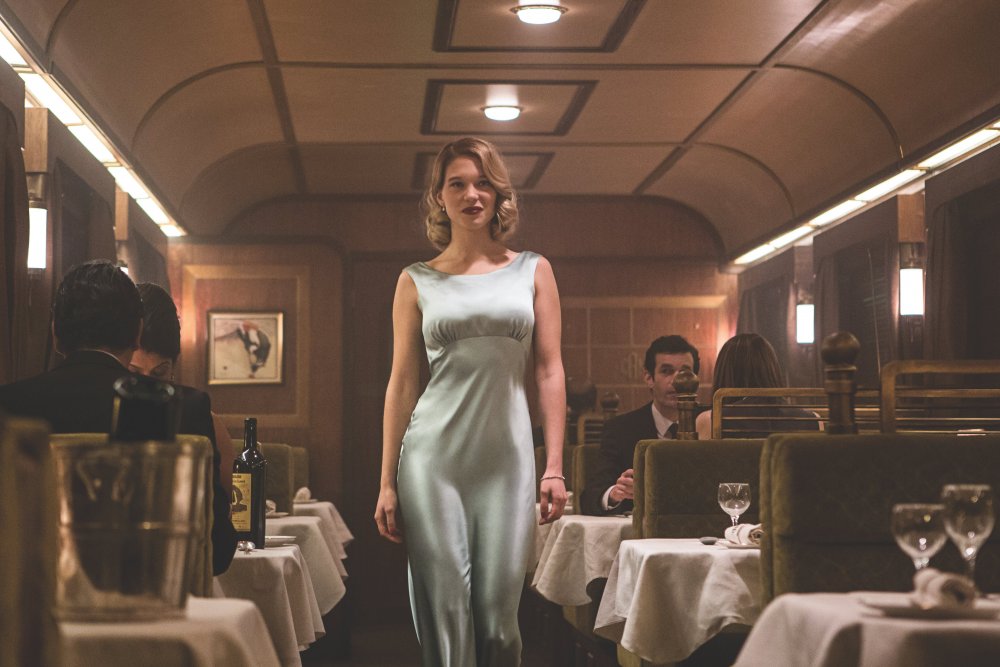 The action is stalled briefly by one of the weakest ever theme songs, and the audience’s patience gets tested by two and a half hours of set-pieces strung on one of the series’ thinner plots. Waltz is a star-turn villain, who gets a white cat and (eventually) a scar to match Donald Pleasence’s in You Only Live Twice, but his monomania actually hinders SPECTRE’s larger scheme. In the end, the villain’s automated torture chair (exactly the sort of contraption Le Chiffre sneered at in Casino Royale) and Joker-like giggly fixation on the hero are less of a threat to freedom than manpower cuts and policy changes in the intelligence services.

Nevertheless, for all its wayward plotting (including an unhelpful tie-in with Bond’s childhood that makes very little sense) and off-the-peg elements, SPECTRE works. It has a parade of imaginative action sequences, the lush cinematography of Hoyte Van Hoytema (of Let the Right One In, ably replacing Roger Deakins’s stellar Skyfall turn), spectacular locations (a mountaintop clinic after the manner of Blofeld’s lair in On Her Majesty’s Secret Service, a SPECTRE base in a Tunisian meteor crater), superb costuming (Craig gets a white tuxedo and Seydoux a classic pale blue gown for their North African interlude) and Craig’s perfect cocktail of grit and charm.

Related to Film of the week: SPECTRE