Film of the week: Sorry to Bother You is an unruly, outrageous corporate satire

The grasping racial politics of late-stage capitalism come under fire in Boots Riley’s wildly inventive comedy, starring Lakeith Stanfield as an office worker who gets too close to the truth.

from our next issue 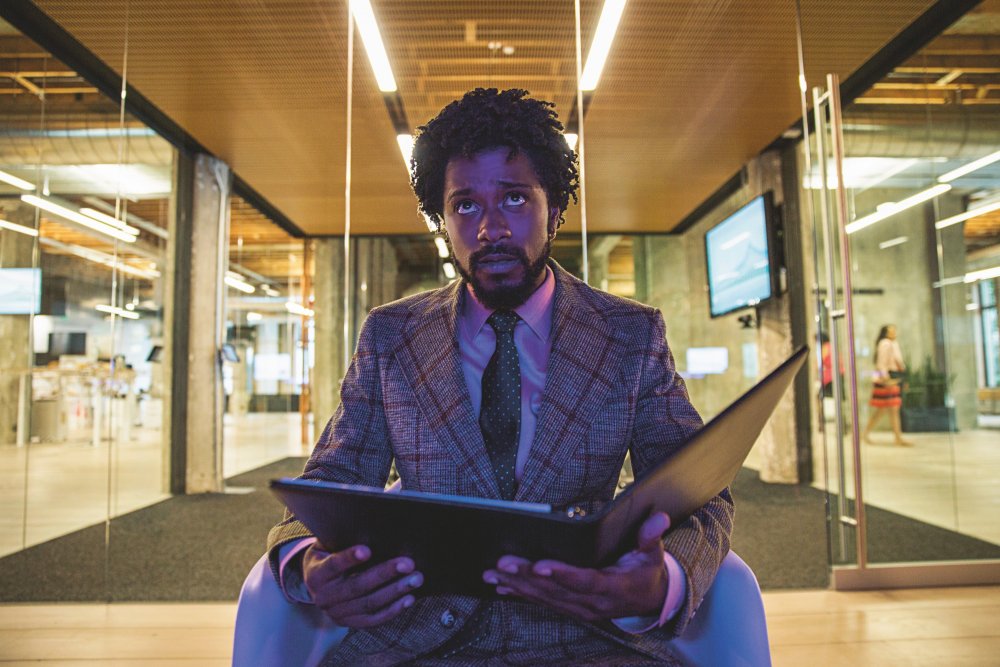 Lakeith Stanfield as Cassius Green in Sorry to Bother You

The title of Boots Riley’s comedy is at minimum a double entendre: besides referring to – and satirising – the self-effacing patter of corporate cold-callers (the ones who never fail to ring you up at dinner time), it underlines its creator’s unapologetic mandate to be an irritant as well as an entertainer: “Sorry, not sorry”, as the saying goes. A long-time rapper whose politically infused rap collective The Coup was castigated by US conservative pundits for ‘anti-Americanism’ – a charge their frontman wore like a badge of honour – Riley has based his feature debut on his experiences working for a telemarketing company in California. This partially accounts for the film’s personal quality, but ultimately it’s more about ideology than autobiography – or, as Riley might suggest, its real subject is the indivisibility of the personal and the political.

The director’s alter ego here is Cassius (Lakeith Stanfield), whose nickname – ‘Cash‘ – also points to the source of his anxiety. As the film opens, he’s living in his uncle’s garage with his performance-artist girlfriend Detroit (Tessa Thompson) and without much in the way of professional prospects.

The sudden appearance of an entry-level job at the (symbolically named) RegalView company – whose cover story of selling encyclopedias belies more exploitative practices – catalyses Cash’s sense of self-worth, especially once he starts using a ‘white voice‘ to make inroads with the mostly Caucasian consumers he phones from his cubicle. In short order, his bosses bestow on him the (again, symbolic) title of ‘Power Caller’, moving him up the company hierarchy – figuratively, but also literally, to a higher floor. The new gap between Cash and his co-workers brings him closer to RegalView’s ruling class – and to the truth of what they’re really selling. 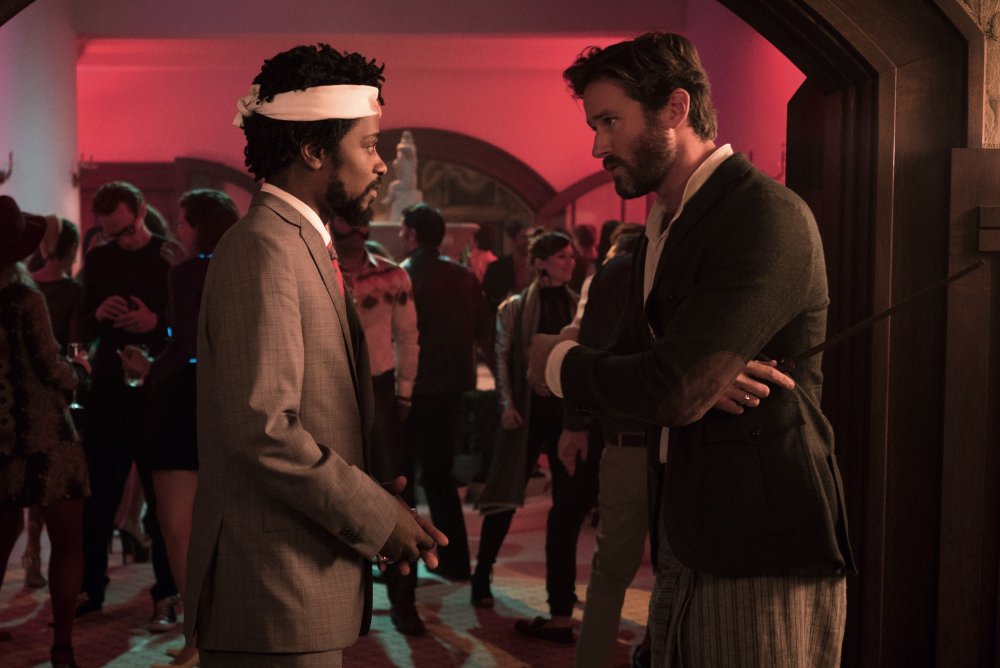 As a broad allegory of late-stage capitalism colonising racial identity and co-opting individual principles, the film bristles with invention and ingenuity. Riley’s decision to present the action in the detached, magic-realist style of early Spike Jonze (ie Being John Malkovich, whose production design is evoked in the layout of RegalView’s offices) simultaneously simplifies and heightens the script’s implied outrage at Cash’s indoctrination, while the proliferation of sight gags and illustrative gimmicks, from Verhoevenian faux-reality shows to creature-feature special effects, demonstrates a commitment to absurdism. The question is whether the film’s willingness to keep upping the ante in terms of outrageousness – culminating in the revelation that RegalView’s parodically Jobs-like honcho Steve Lift (Armie Hammer) has a Dr Frankenstein-ish scheme for total labour-market domination – is a Swiftian masterstroke or else a gifted sketch comic’s capitulation to shtick.

In this sense, it’s fair to compare Sorry to Bother You with 2017’s Get Out (which also co-starred Stanfield), a film that took a similarly hard turn into genre tropes in order to represent a 21st-century reality in which normalcy itself is a grotesque disguise. Jordan Peele’s metaphorical use of hypnosis as a tool to sedate wokeness – subjugation as an externally induced trance state – resonated because it was the one aspect of Get Out treated with total severity. By contrast, Riley’s ultimate visual/conceptual money shot (and given the emphasis in the home stretch on the semiotics of male genitalia, ‘money shot’ is entirely appropriate here) takes the form of a joke – one that, in the final analysis, feels more juvenile than Juvenalian.

Stanfield with Tessa Thompson as Detroit

Not that there’s necessarily anything wrong with such adolescent gestures: Sorry to Bother You is, remember, a first film (even if its maker is in his late forties), and why should righteous exasperation and exuberance be wasted on the young? During the film’s US release, critics pointed out other flaws in Riley’s conception, tied to the thinness of Detroit’s character (which reduces Thompson, a gifted performer, to serving as her co-star’s sounding board and object of desire) and, in the same vein, a strangely gendered version of slave labour, and these problems absolutely detract from the movie’s overall effect. (Riley’s attempts to minimise them in real time via a series of tweets did not help his case one bit.)

At the same time, at a moment when cultural pundits do their best to perceive genuinely progressive elements in branded blockbusters like Black Panther (2018), with its CIA-employed sidekick-hero and dubiously militant villain, Riley’s untidy, unruly movie serves as a counterpoint to such sanitisation. This palpably handmade movie doesn’t reach out, and nor does it engage in chin stroking: instead, it extends a middle finger. If there’s something obnoxious about that gesture, it also feels honest: after all, satire means never having to say you’re sorry. 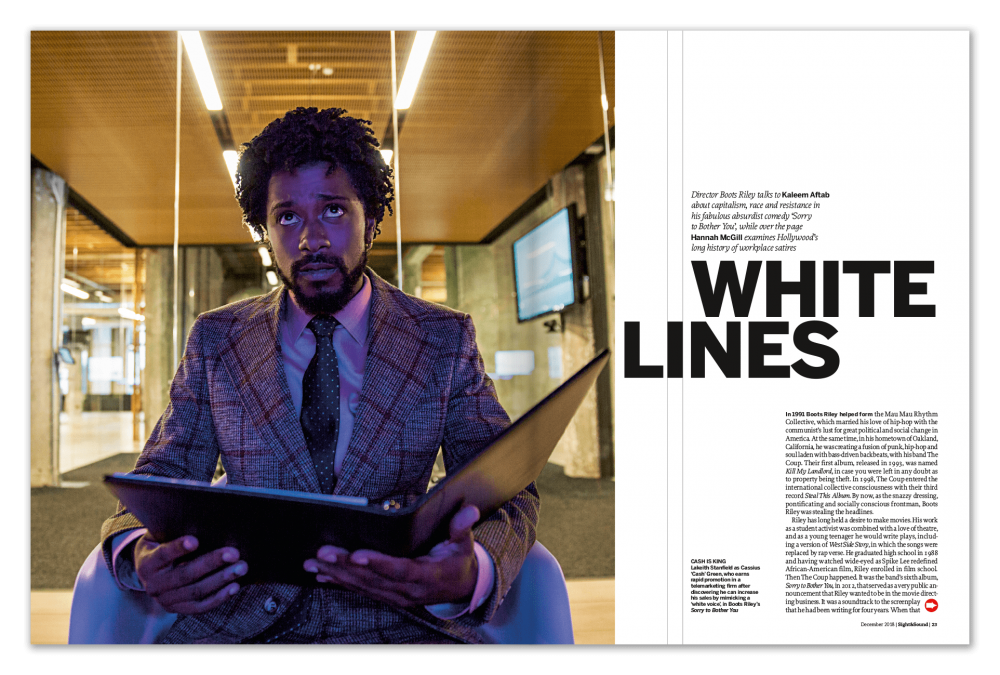 Related to Film of the week: Sorry to Bother You is an unruly, outrageous corporate satire