BlacKkKlansman review: Spike Lee fails to get to the heart of racist America

Lee recounts the true story of a black police officer who went undercover in the KKK in this sweeping, clumsy parable, more concerned with landing jokes than interrogating racial hatred. 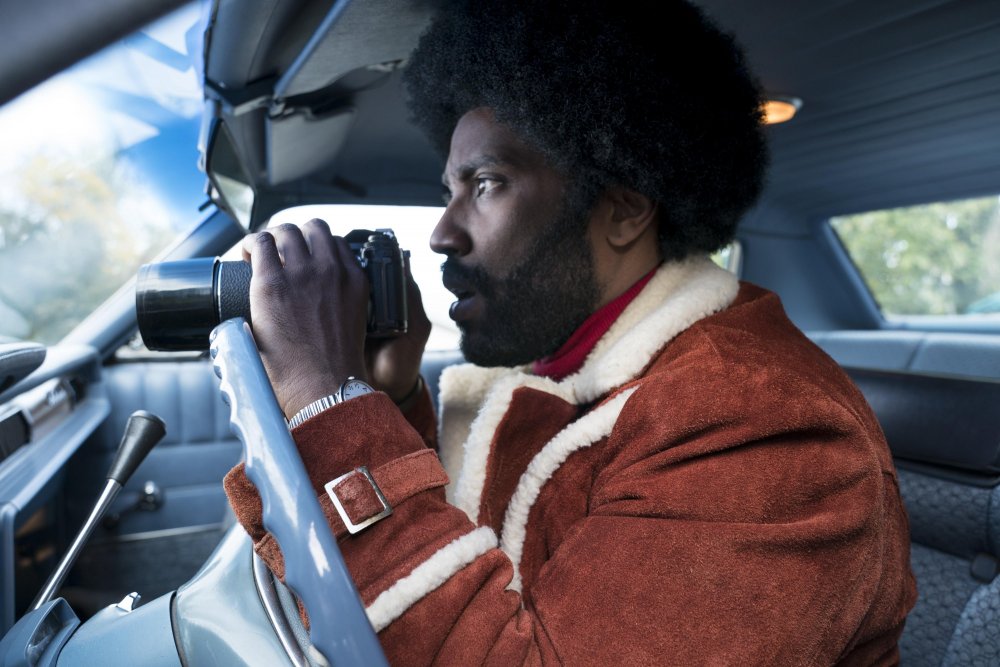 Spike Lee’s latest film is a tale told in twos: two heroes, two organisations – the Black Panther Party and the Ku Klux Klan – premised on racial pride. Based on the true account by Ron Stallworth in his 2014 book Black Klansman, the film unfolds in 1973, when Stallworth (John David Washington) becomes the first black officer on the Colorado Springs police force and infiltrates the local chapter of the Ku Klux Klan over the phone. He appoints his Jewish colleague Flip Zimmerman (Adam Driver) to act in his stead during personal meetings, and together the two attempt to prevent the Klan’s latest plot. What soon becomes clear is how much BlacKkKlansman is driven by Lee’s understandable frustration and despair over the current political condition of America, and he rarely lets the audience forget it (in one scene, white supremacists cry “Make America great again!”). These glaring parallels ultimately overpower the film, a sweeping parable that squanders any chance the audience might have of finding the story legible on its own terms.

BlacKkKlansman is a film in constant dialogue with cinema: it draws playfully from blaxploitation movies and makes acerbic use of The Birth of a Nation (1915) and Gone with the Wind (1939). But it’s all curiously blaring: in one sequence, Klan members watch Nation, their faces lit with the magic, turned monstrous, that cinema can stir in its viewers; this is intercut with a scene of a veteran activist, played by Harry Belafonte no less, explaining to the black students of Boise State University how the film, legitimised by the president (sound familiar?), led to the Klan’s revival and, emboldened, the horrific violence its members visited on their countless victims. Images wield great power; Lee knows this well, and explored it quite openly in 2000’s Bamboozled, but doesn’t quite trust his audience to get there on their own. And so the scene culminates in opposing cries of “White power!” and “Black power!” – an obvious but perplexing juxtaposition that yields little in the way of complexity.

Ron and Flip’s partnership, too, nods to moviemaking, putting the viewer in mind of the director-actor relationship, as when Stallworth shouts instructions into Zimmerman’s earpiece. In those rare moments when they share the screen, Washington and Driver, in two solid performances, make a winning duo with an intriguing dynamic, undermined at nearly every turn by uneven writing (Lee shares screenwriting credits with three others, including his Chi-raq co-writer Kevin Willmott). The film seems only vaguely interested in the implications of the pair’s layered twinship, or the peculiar fraud of a black man and a Jewish man – two communities especially despised and targeted by the Klan – performing whiteness. Zimmerman confesses that he didn’t grow up terribly immersed in Judaism, and that only now, in the literal face of white supremacy, has he begun to consider his heritage. But we discover little else about him and it’s never brought up again. 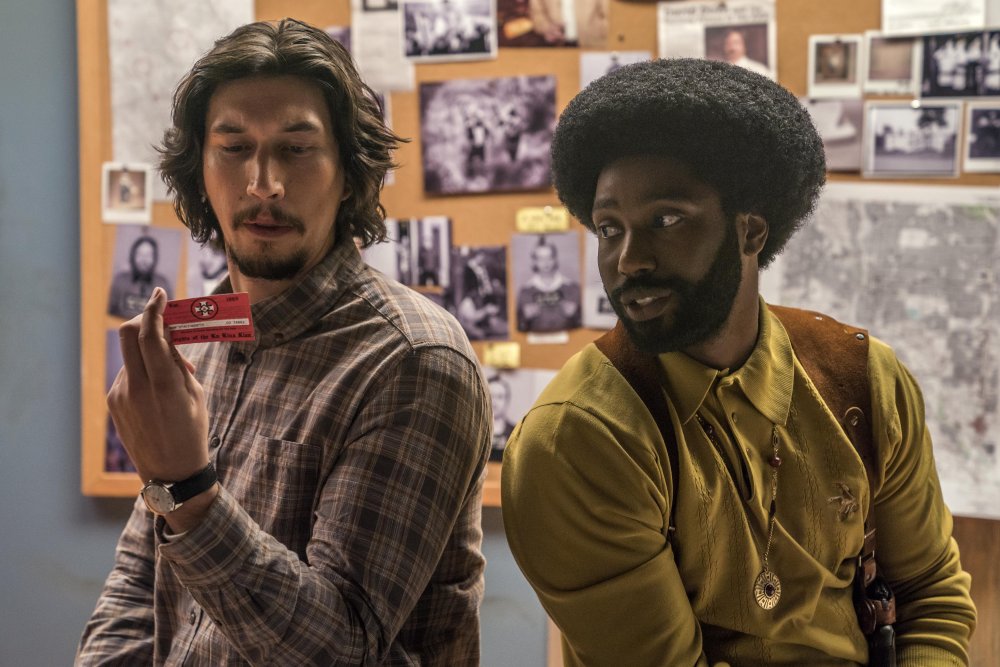 Perhaps less could be said here if the stakes were more effectively established. As it is, the tone wobbles awkwardly between comic satire and overwrought melodrama, and the film spends far too much time making buffoons of its villains, their clownish ineptitude sterilising any danger – and thus suspense – they might present. Somehow law enforcement evades much criticism: only one officer, as cartoonishly evil as you might expect, outwardly opposes Stallworth’s arrival on the force; everyone else seems surprisingly welcoming for 1973, and Stallworth rises through the ranks with unusually little trouble.

White supremacy never feels quite potent enough to warrant the audience’s fear. Much will likely be made of the film’s ending, where Lee somewhat gracelessly attaches harrowing scenes from last year’s Charlottesville white nationalist march, including film of the car that ploughed into the crowd of counterprotesters, killing Heather Heyer. This footage packs power, but the film that precedes it does not get to the heart of what led to such tragedy, and all the tragedies before it. 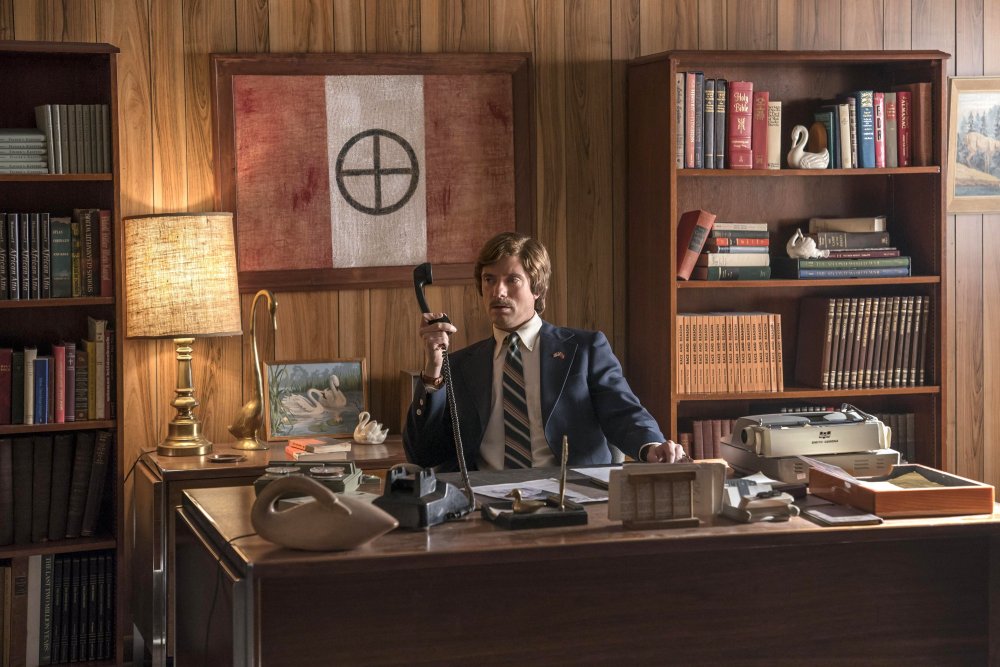 A more artful film lies in here somewhere, one about the business of racial passing and how the ‘raced’ navigate predominantly white spaces; about the tenuousness of whiteness and the lengths some might travel to preserve its power – that is to say, murderous lengths. Lee seems more concerned with landing particular jokes. Bizarrely, when Stallworth expresses scepticism that someone as shamelessly racist as Grand Wizard David Duke (played here by a casually chilling Topher Grace) could become president of the United States, it is a white cop who tells him he is being “naive”. And today’s audience is in on the gag: a man endorsed by Duke would indeed take the presidency. The biggest joke – in many ways emblematic of the film’s biggest failure – comes near the end, when Stallworth reveals that he is black to Duke, with whom he has forged a false intimacy via telephone. A stunned Duke clings to the phone in horrified silence. Stallworth and his colleagues laugh triumphantly and the audience is expected to follow, but the power of the moment has been clipped. Duke has been humiliated, but the film itself has come no closer to uncovering the gravity behind such devastating hatred.

Related to BlacKkKlansman review: Spike Lee fails to get to the heart of racist America