Who gets to tell the story – or stories – of a democratic struggle? On the fifth anniversary of the Arab Spring, Alisa Lebow’s bustling nonlinear ‘meta-documentary’ Filming Revolution encompasses the voices of 30 Egyptian filmmakers, artists and activists. 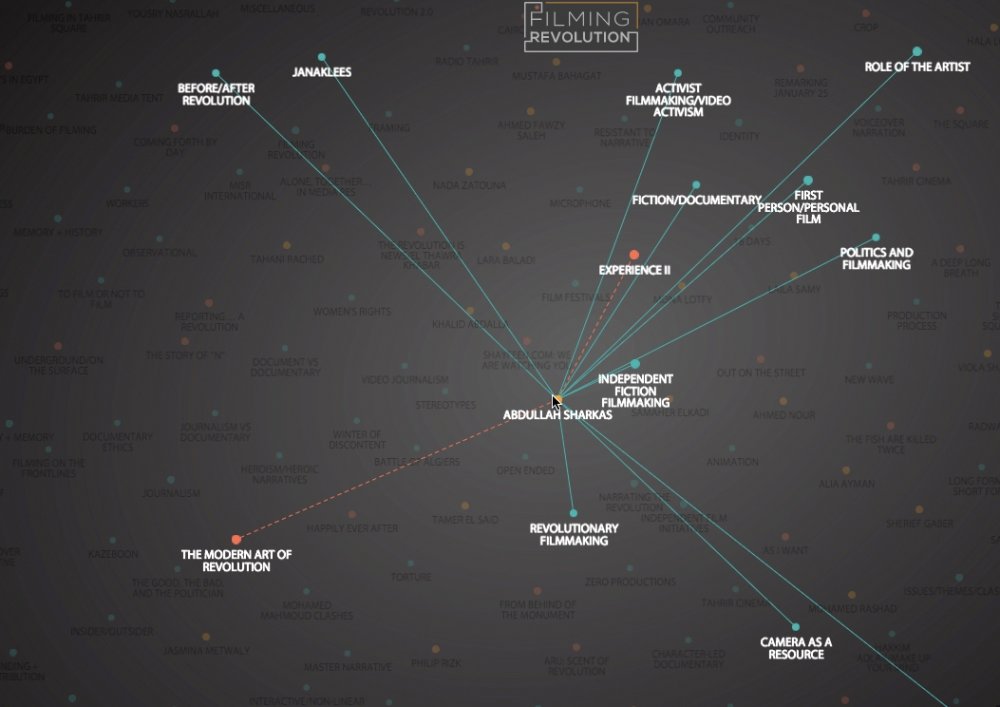 Filming Revolution [filmingrevolution.org] is easy to get lost in, but almost impossible to describe. It is primarily a web archive comprising interviews with filmmakers, artists and activists who were active during the revolutionary struggle in Egypt from 2011 to 2014, when the interviews were filmed by documentary maker and scholar Alisa Lebow. Some of the interviewees filmed in Tahrir; some didn’t. Some are still making work relating directly to the revolution; some are not. Most, but not all of them, are Egyptian; most of them are young. Half of the interviewees are female: filmmaker, producer and programmer Marianne Khoury, who began her career working with Youssef Chahine, suggests that female filmmakers have emerged into prominence since the revolution (interview segment: Women Filmmakers Since the Revolution).

But clicking on Khoury’s interview reveals that the site is not just an archive, nor a conventional documentary. It is part of a number of different clusters or constellations. If you select Khoury’s name from the sidebar listing 29 individual interviewees, you see that her interview has been divided into 15 segments. Hovering over each segment title produces a constellation of coloured lines linking it to one or more of the people, themes or projects (marked as varicoloured dots) that constitute the site’s nodes. Women Filmmakers Since the Revolution links to the theme Women Filmmakers; clicking on that leads to the node Women/Gender, including an interview segment with (male) filmmaker Sherief Elkatsha, and also to Viola Shafik’s film Arij: Scent of Revolution. Arij is at the centre of a constellation that includes the themes History + Memory and Resistant to Narrative.

The constellated form of the site embodies Lebow’s central finding, which she presented at the site’s launch at the Whitechapel Art Gallery on 14 January: that while the upheavals in Tahrir Square in January 2011 and beyond were massively documented, both the events and those who documented them were resistant to narrative. She had to find a way to organise her interviewees’ reflections that, as she described it, “would leave room for uncertainty, contradiction and incompleteness, mirroring the situation.” As actor and video activist Khalid Abdalla pointed out in conversation with Lebow, “part of the revolutionary rupture is this extreme battle over narratives” between the status quo and the resistance, leading perhaps to an eschewal of narrative in favour of what he described as “ideas [that] have a concreteness: moments happen that you can just film. There’s an in and an out, and they say what you want to.”

In her short film I Will Speak of the Revolution (2011), Nadine Khan relates in voiceover her resistance to even speaking about the revolution, as her camera follows feet walking on pavement in front of her: a literally concrete moment that says it all, quietly in comparison to the dramatic scenes on the news. Documenting herself as part of events in motion, she says that “the power of Tahrir is that it cannot be owned or framed. So why should I frame it?… All [of these] beautiful inspiring stories, one day they will be told, but at the right moment. The day that we feel that the Square has really won… I think now I would rather not speak of the Revolution.”

Digital and installation artist Lara Baladi is forging an impersonal aesthetics of the revolution as a generator, repository and transmitter of cultural images: of the Square as itself an agent or subject that might win or lose. Baladi quotes Slavoj Žižek heralding “a universality of struggle” in television images from Tahrir in her three-screen installation project Alone, Together… in Media Res, which counterposes two screens showing footage from Tahrir with a third sampling various Western media from Žižek to Disney’s Alice in Wonderland, considering questions of individual and collective identity. (The idea of a collective identity not only framed but produced by shared media, which Lebow refers to as “McLuhanist” in her notes on the artist, underpins Baladi’s current project, Vox Populi, a transmedia documentary drawing on the artist’s digital archive of materials circulating around, but not necessarily referring directly to, the revolution.)

An established artist before 2011, Baladi argues in an interview segment that there was “definitely a sense of confusion about what is creativity, what is art, and what is activism” (Confusion between Art and Activism). Her interest in observing the limits and overlaps, and in encouraging a rigorous practice, was perhaps the inspiration for her founding role in Tahrir Cinema, an ad hoc series of outdoor screenings of footage of the revolution in the Square in 2011. The raw footage screened became the basis of the Mosireen archive, as well as Vox Populi.

Tahrir Cinema initiators Khalid Abdalla and Tamer El Said, who were working together in Cairo from 2008-10 on the feature In the Last Days of the City (just completed for exhibition), in which Abdalla plays a documentary filmmaker, were also founders of Mosireen; El Said brought together Abdalla and filmmaker and activist Aida Elkashef, who had both proposed video activist projects to him (Mosireen: How It All Began). Mosireen filmmakers contributed footage to Jehane Noujaim’s documentary The Square (2013), and Elkashef talks about acting as Noujaim’s guide to the sit-in, and the way in which the larger documentary threatened to overtake or overshadow grassroots projects (Involvement in Jehane Noujaim’s The Square).

This reflection on a widely-circulated feature documentary is one place where Filming Revolution’s value and skill in executing its intention as a meta-documentary is explicitly evident. By allowing the documentary’s subjects and participants to comment on the production and editing of the one film that is definitional of the Egyptian revolution for many viewers outside the country, Filming Revolution acts as both a filmic documentary – composed of talking heads, archive clips, found footage, remediation of other projects and textual information – and as a new way of critical theory (particularly through the material constellated around the themes Documentary and Journalism), a record and an intervention at once. Allowing the user to navigate between the different source materials by theme, individual and project means that each user creates their own documentary: the form of the website is thus itself a critical intervention into the kind of unitary narrative demanded by dominant media, into which Noujaim’s singular and subjective film was co-opted.

The user experience moves beyond the supposed tension between the ever-growing convergence of dominant media and social media’s blandishments of personal curation, revealing that both modes – watching CNN and following Twitter – provide the viewer with the same endlessly-repeated moments and fragments, and with the same lack of contextual complexity. Lebow argues that the revolution not only will not be filmed, but that it will not be Facebooked (explored in the themes constellated around Revolution 2.0). What Filming Revolution offers is an in-depth, focused alternative for what Lebow called a “curious, patient, inquisitive user,” one that leads from clip to clip to contextual essay. Viewers are encouraged – but not forced – to compile a pathway tracing their routes through the site, such as my pathway Reviewing the Revolution, which collects the clips referenced in this article. Pathways are listed in a lefthand sidebar which can be shown or hidden, depending on your preferred form of navigation.

There is a resonance between the pathway tool, with its emphasis on the subjective and partial, and the predominance of the personal essay that Lebow notes as a mode across the filmmakers she interviews – not for its adherence to the egoism of the social-media age, but in imagining the individual as a conduit, or the node around which ideas and arguments constellate. The possibility of constellation expands the viewing experience beyond the reception of 29 interviews: each individual and idea is multiply connected and refracted, both expressively personal and self-reflexively discursive.

That seems to mirror the filmmakers’ powerful and unusual experience of a new filmmaking practice unfolding in tandem with a new collective politics. Filmmaker Jasmina Metwaly commented that she had not initially planned to make work about the revolution, and had no plan when she began to film. “What really happened is that the revolution took over a lot of people and their lives, and they just had to bend – mend – accordingly… The actual thing was just happening all around us, and you – whether you wanted, or didn’t want it – you were part of it. The power of the crowd took over. The very thing that artists preserve is me: who I am, what I want, how do I represent my world. I think there was no space for that” (interview segment: Art + Activism).

Having picked up her camera, Metwaly became part of Mosireen, but also now works collaboratively with Philip Rizk documenting workers’ struggles and collectivities beyond the Square. As well as directing collectively, they devised the film Out on the Street (2015) with its subjects through acting workshops.

Filming Revolution makes space for the individual voice, in all its hesitations and contradictions; but also foregrounds each individual’s sense of connection – one forged through the encounter with the revolutionary solidarity of the Square. As an archive, it investigates and preserves a moment of hope, a moment that stands out as catalyst and fulcrum, but it also extends that moment: backwards, through Metwaly and Rizk’s documentation of workers protesting before the ouster; and forwards, not only through the uncertain oscillations of hope and despair between 2011 and 2014, but forward, into the future through us, as something more than and different from the traditional conception of a film.

“The revolution won’t be a film, ever,” states Nada Riyadh, who is working on a personal essay film called Happily Ever After, which explores the revolution through the lens of her romantic relationship, and vice versa. Filmmaker Abdullah Sharkas comments, “I don’t know how to make a film without a love story,” and goes on to argue for the place of love in revolutionary filmmaking (interview segment: Why Love Has a Place in Revolutionary Filmmaking). It’s telling that this segment is themed as Random: love’s significance is as a revolutionary, but not narrative, principle. As in revolution, so in the experience of the site, love does not mean ‘happily ever after – the end’, but an ongoing process of conversation and connection, in which we all have to be active. 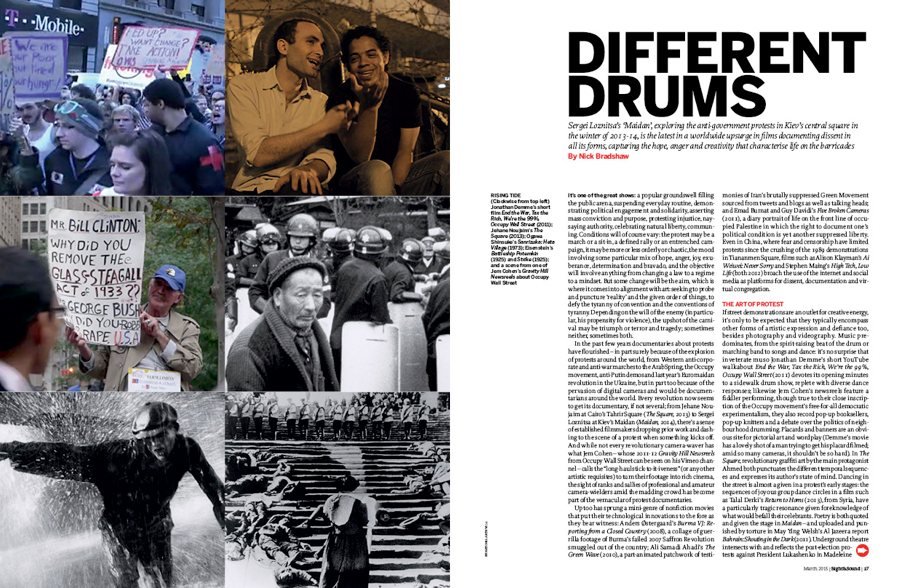