Willem Dafoe: the Sight & Sound Interview, and in the words of Robert Pattinson, Abel Ferrara and Robert Eggers. Plus Greta Gerwig on Little Women, Josh and Benny Safdie on Uncut Gems, the many faces of Federico Fellini, Terry Gilliam shooting The Man Who Killed Don Quixote, and a preview of 2020 at the movies.

In print and digital from 6 January 2020. Buy a print copy, get the digital edition or . 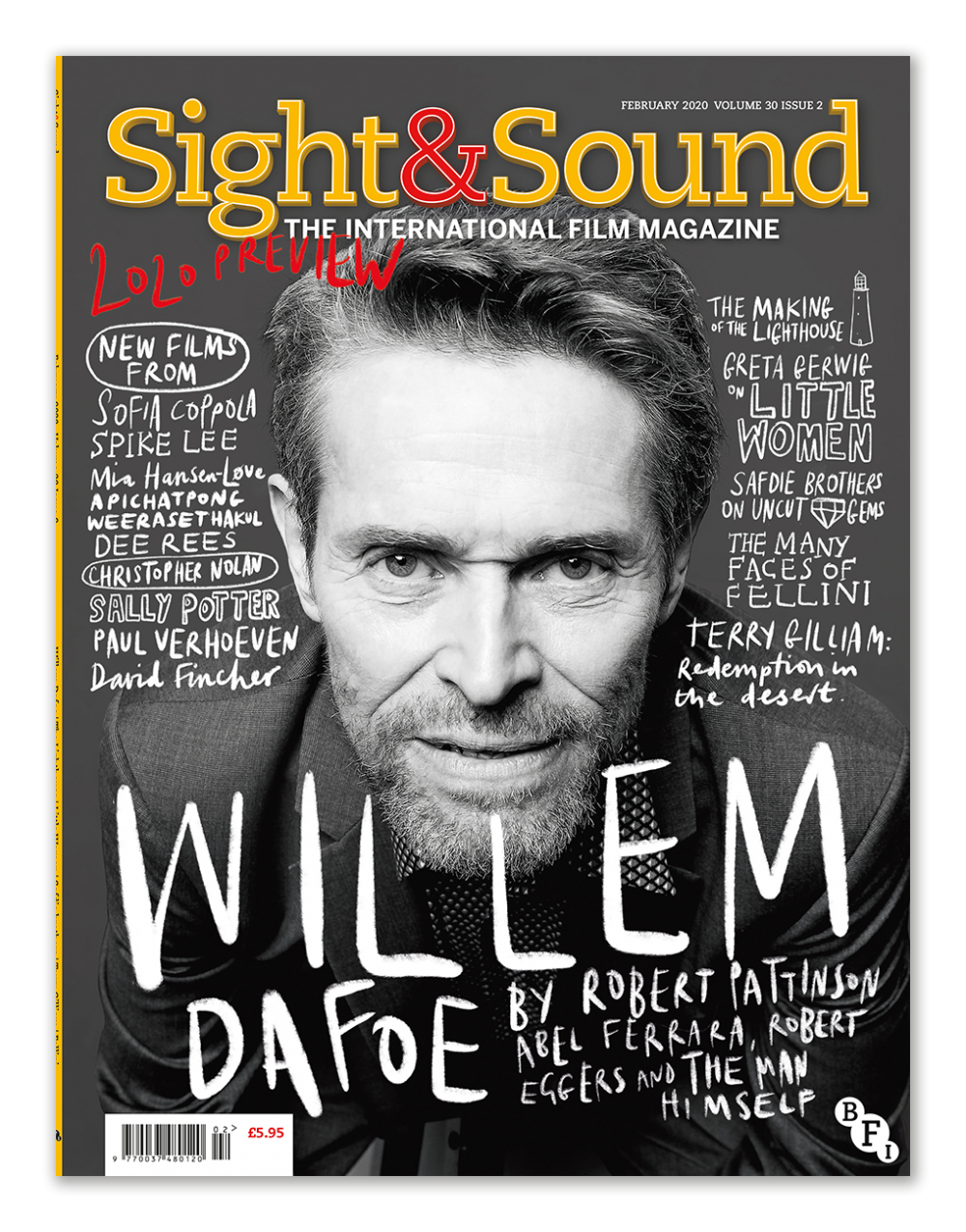 For our February 2020 issue we sit down with Willem Dafoe, an actor whose questing spirit and tireless pursuit of fresh challenges has helped him build up one of the most adventurous and eclectic filmographies in modern cinema. “I am a sensation freak,” he tells Philip Concannon, as the actor’s latest film The Lighthouse reaches UK cinemas. “Once you get a taste of what it’s like to make something beautiful, you want to go back there.”

Over his four decades plus in film, Dafoe has worked with an astonishing number of some of the most challenging and distinctive directors in cinema, from Paul Schrader to Oliver Stone, William Friedkin to Lars Von Trier, Kathryn Bigelow to Theo Angelopoulos. “I’m the kind of actor that likes to give myself to a director”, he says. “I love it when I become a creature of their imaginations.”

The Lighthouse continues that theme, immersing him in the singular vision of director Robert Eggers, in a tale of two men forced into maddeningly claustrophobic confines in a lighthouse in Nova Scotia in the late 19th century. Dafoe’s portrayal of the gnarly, farting, bearded old salty-dog lighthouse keeper in the film is unforgettable, and given brilliant foil from his younger co-star Robert Pattinson. We speak to both Eggers and Pattinson about their experience making the film, and their reflections on working with Dafoe.

As well as being a showcase for its two lead actors, The Lighthouse is also a film that displays a trove of literary and visual influences, ranging from Herman Melville to H.P. Lovecraft. Graham Fuller explores the rich range of work that fired Eggers’s imagination, and fed into the film’s creation. Eggers is one of a number of exciting American directors to have broken through in recent years.

Another pair are New Yorkers the Safdie brothers, whose latest film Uncut Gems, a frenetic tale of a diamond dealer hustling to pay gambling debts, has been their biggest success to date. Robert Koehler meets the brothers, and asks them about the lure of working in the crime genre, and why only a star of Adam Sandler’s calibre could have pulled off the film’s tricky lead role.

Staying with US talent, Greta Gerwig’s record of bringing offbeat, restless women to life marked her out as the perfect candidate to adapt a new version of Louisa May Alcott’s Little Women. She talks to Isabel Stevens about the challenge of radically reinterpreting a much loved classic novel for the Trump and #MeToo era.

Little Women was clearly something of a passion project for Gerwig, but if we’re on the subject of passion projects, then Terry Gilliam’s cursed 30-year struggle to bring The Man Who Killed Don Quixote to the screen beats just about them all. As the film finally finds its way to UK cinemas this month, Philip Concannon recalls watching the indefatigable director at work on the Portuguese set back in 2017, and talking to him about calamities, compromises and coconuts.

Gilliam is genuinely one of those directors who always brings his own utterly distinctive stamp to any project he’s involved in, something that was also of course true of the great Italian maestro Federico Fellini, a director whose style was so distinctive hat it even spawned an adjective – the ‘Felliniesque’. As the BFI launches a major retrospective to celebrate the centenary of the gleefully idiosyncratic director’s birth, we explore some of the themes that made his work such a dazzling highpoint in 20th-century art cinema.

And we kick off a new year and a new decade with an 11-page special look ahead to on screens both big and small.

All this, plus reviews of all the new cinema releases, the best new Blu-ray and DVD releases and a look at new film books. 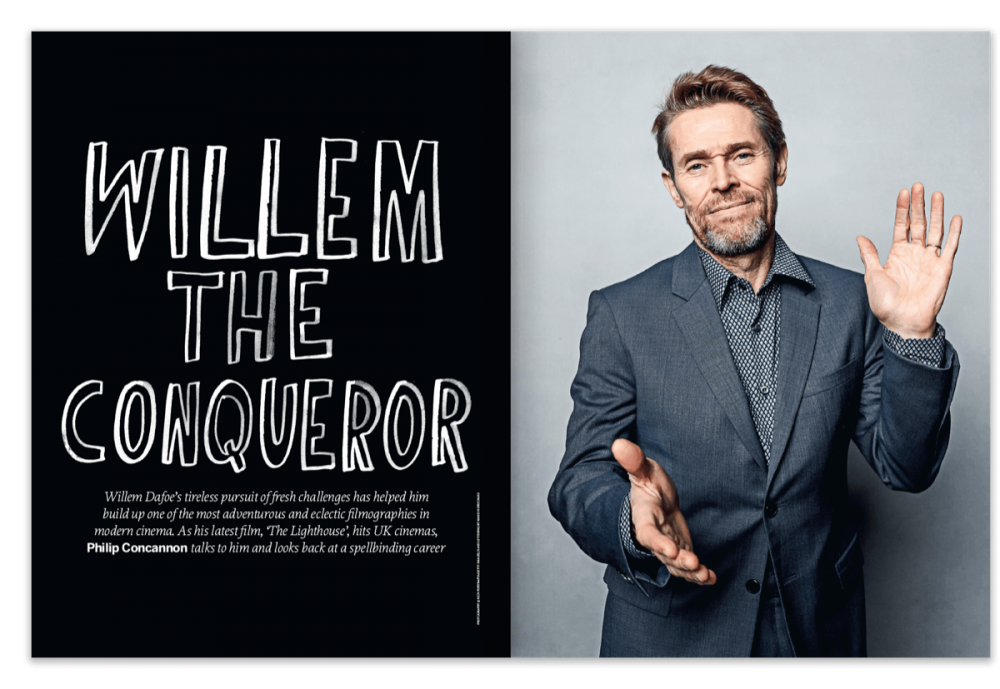 Willem Dafoe’s tireless pursuit of fresh challenges has helped him build up one of the most adventurous and eclectic filmographies in modern cinema. As his latest film, The Lighthouse, hits UK cinemas, Philip Concannon talks to him and looks back at a spellbinding career.

+ Abel Ferrara on Willem Dafoe: “We have an understanding”

+ Robert Eggers on The Lighthouse: “I knew it could get weird” 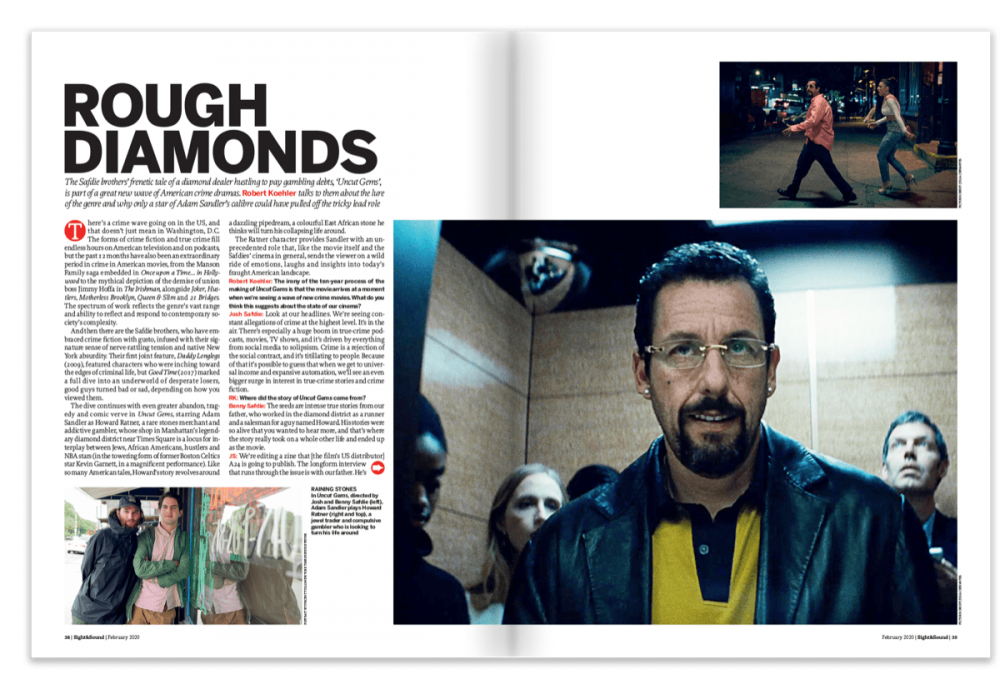 The Safdie brothers’ frenetic tale of a diamond dealer hustling to pay gambling debts, Uncut Gems, is part of a great new wave of American crime dramas. Robert Koehler talks to them about the lure of the genre and why only a star of Adam Sandler’s calibre could have pulled off the tricky lead role. 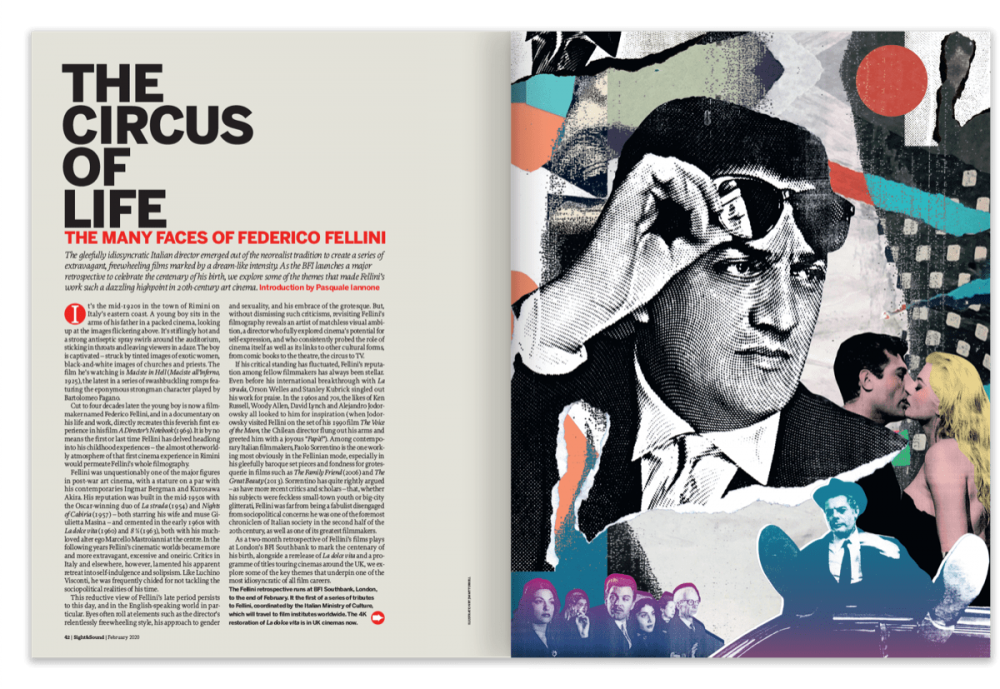 The circus of life: the many faces of Federico Fellini 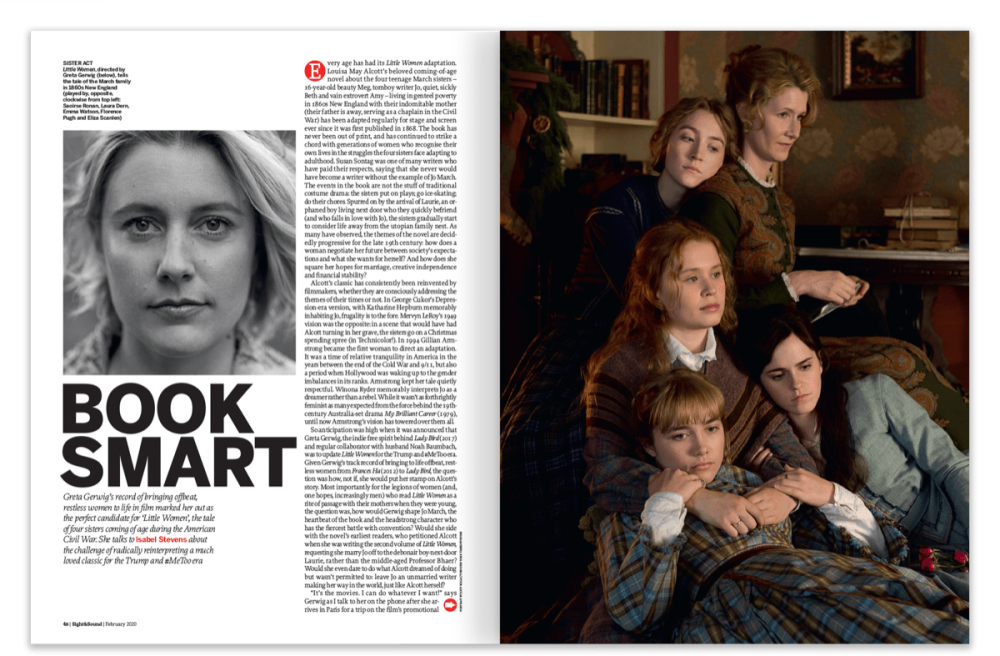 Greta Gerwig’s record of bringing offbeat, restless women to life in film marked her out as the perfect candidate for Little Women, the tale of four sisters coming of age during the American Civil War. She talks to Isabel Stevens about the challenge of radically reinterpreting a much loved classic for the Trump and #MeToo era. 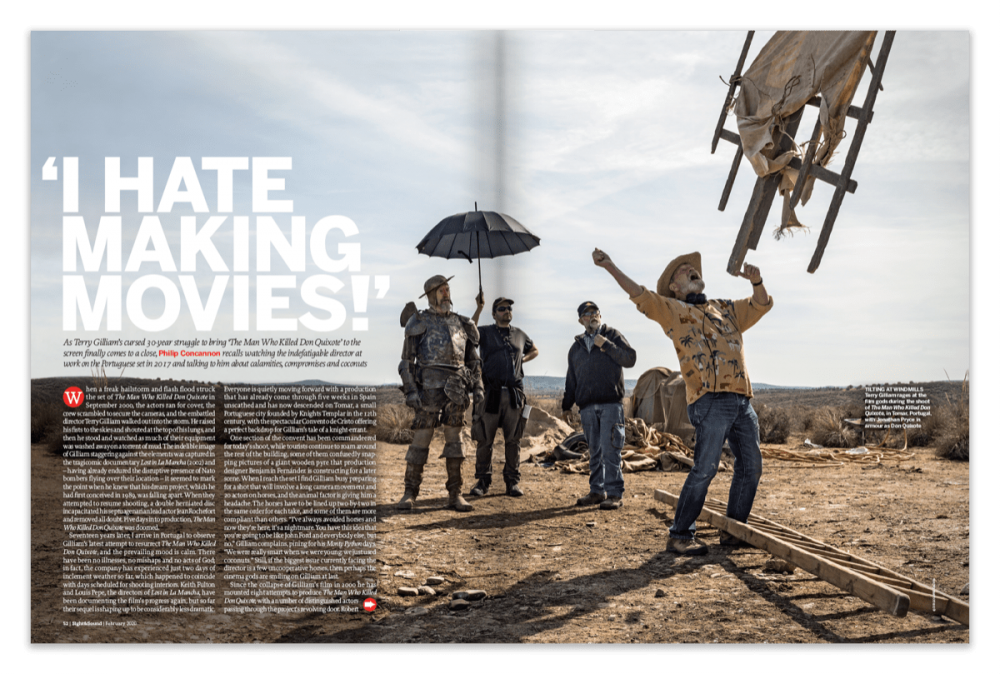 As Terry Gilliam’s cursed 30-year struggle to bring The Man Who Killed Don Quixote to the screen finally comes to a close, Philip Concannon recalls watching the indefatigable director at work on the Portuguese set in 2017 and talking to him about calamities, compromises and coconuts. 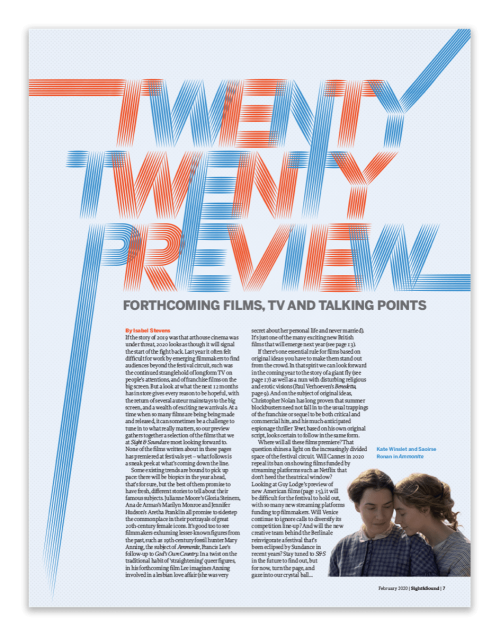 The pick of the films we’re most excited about over the next 12 months – from Spike Lee’s new Vietnam War drama to Sofia Coppola’s comic romp through New York. By Kaleem Aftab, Jonathan Romney, Isabel Stevens, So Mayer and Pamela Hutchinson.

New works by Andrea Arnold, Sally Potter and Joanna Hogg lead a bumper crop of films by female directors, in a year that also promises a flood of exciting debuts, writes Wendy Mitchell.

The latest hand-drawn animated feature by Song of the Sea director Tomm Moore is an action adventure that taps into Irish folklore with a tale of a wolf hunter’s friendship with a girl in the 1640s, writes Alex Dudok de Wit.

Jonathan Romney looks forward to a glut of titles from France, work from a trio of Chinese masters and a resurrected gem from the late, great Raúl Ruiz.

An enticing banquet of prestige films from the streaming giants, including work by Andrew Dominik and Charlie Kaufman, offers a sorely needed alternative to the studios’ regular diet of sequels and superheroes, writes Guy Lodge.

Can Disney maintain 2019’s dominance? Charles Gant predicts key industry trends at the box office and beyond in the year ahead.

Overwhelmed by the sheer volume of television shows competing for your attention? Scott Bryan can help to guide you through the maze.

In focus: The North Water

Nick James reports from the Hungarian set of Andrew Haigh’s tale of murder on board an Arctic-bound whaling ship in the 19th century. 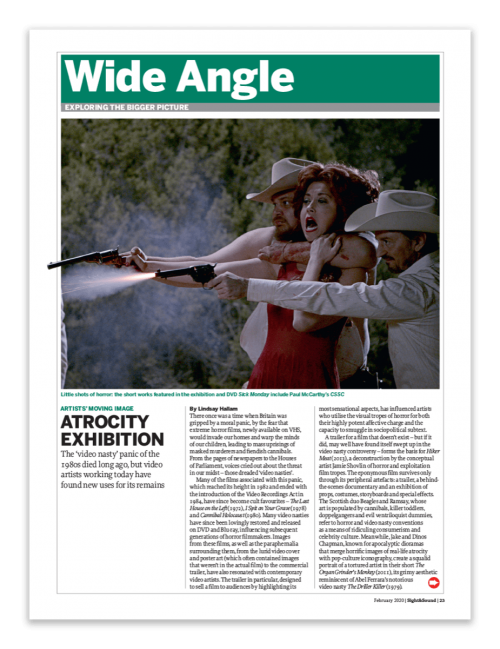 The ‘video nasty’ panic of the 1980s died long ago, but video artists working today have found new uses for its remains. By Lindsay Hallam.

Retrospective: Fiorucci Made Me Hardcore

Twenty years after it was made, Mark Leckey’s makeshift video collage of subcultures at play has lost none of its melancholy impact. By Kieron Corless.

The unpretentious beauty of the many films Allan Dwan directed in a 50-year career show the virtue of learning on the job. By Bryony Dixon. 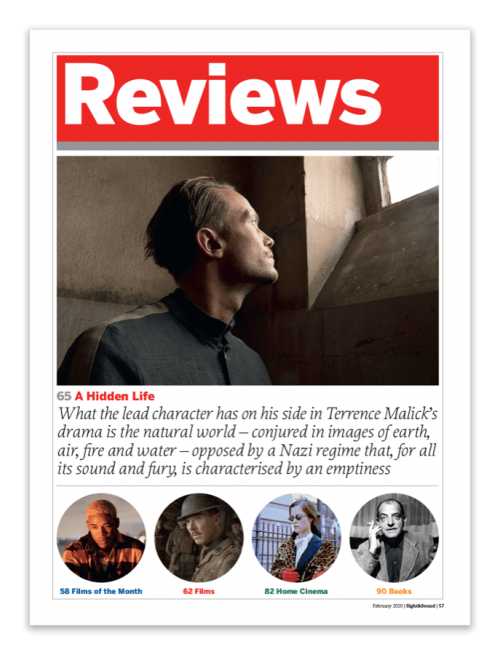 A Beautiful Day in the Neighborhood
Be Natural: The Untold Story of Alice Guy-Blaché
Bombshell
Charlie’s Angels
Everything: The Real Thing Story
Fiddler: A Miracle of Miracles
A Hidden Life
Human Nature
In the Line of Duty
Jay & Silent Bob Reboot
Jumanji: The Next Level
Just Mercy
The Lighthouse

No Fathers in Kashmir
The Party’s Just Beginning

Plus One
Present.Perfect.
Queen & Slim
The Runaways
Show Me the Picture: The Story of Jim Marshall
Talking About Trees
21 Bridges
Uncut Gems
Undocument
Weathering with You
The Whistleblower 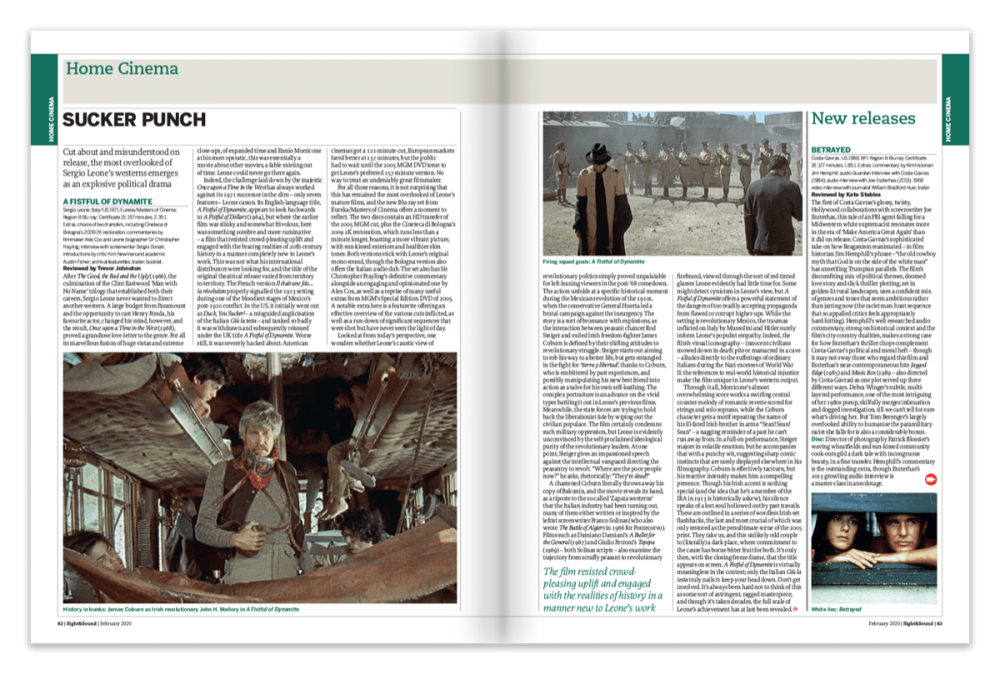 Sucker punch: A Fistful of Dynamite

Cut about and misunderstood on release, the most overlooked of Sergio Leone’s westerns emerges as an explosive political drama. Reviewed by Trevor Johnston.

Twenty-first-century technology and a supremely modern central performance mark out a film set firmly in the New York of the 1990s. Reviewed by Nick Lee.

Does the new digital video subscription service BritBox have what it takes to compete with Netflix? By Scott Bryan.

Robert Hanks on Worzel Gummidge: The Complete Collection and Jack the Ripper 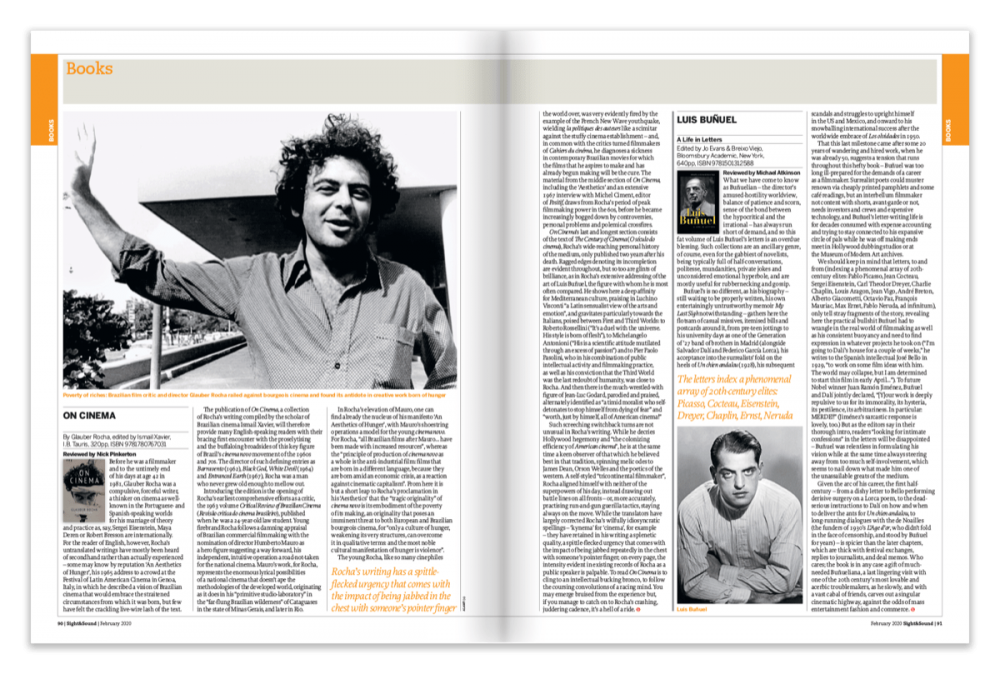 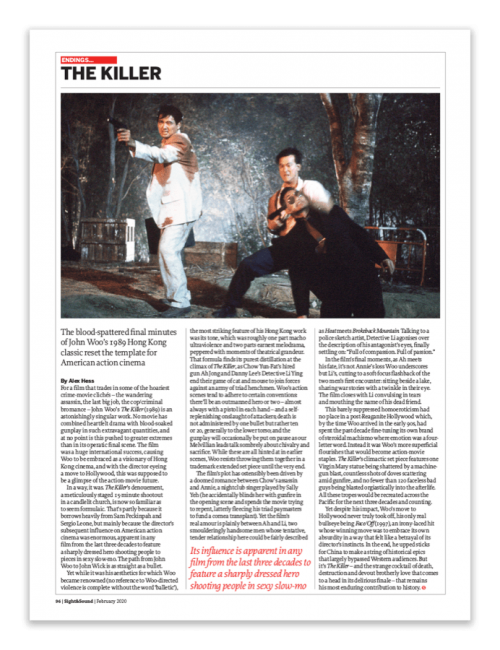 Bringing in the trash

Edge of Darkness and lost standards