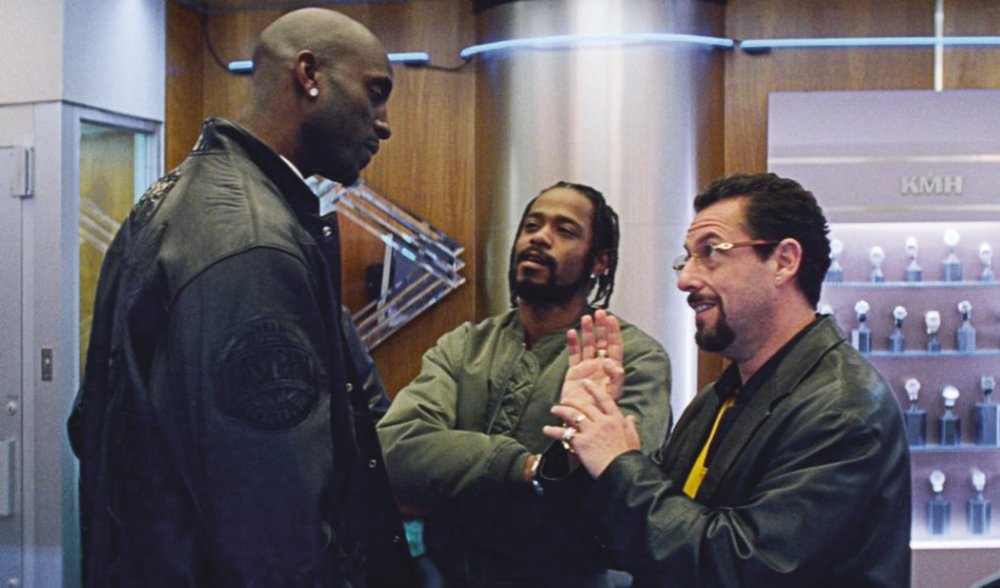 If they hadn’t already used it for their previous study of addiction, Heaven Knows What would have been a good title for this seriocomic character study set in New York’s diamond district, where US indie stalwarts Josh and Bennie Safdie enter the mainstream with a startling showcase for Hollywood A-lister Adam Sandler.

Mystery remains a central element in the Safdies’ most polished – yet still characteristically, chaotically energetic – effort to date. Just as we previously wondered what compelled Arielle Holmes to eke out a horrible junkie existence with her worthless boyfriend, or just what careening hustler Robert Pattinson actually meant by “my purpose” in Good Time (2017), here the questions pile up after their eye-catching opener dissolves from the crystal structure inside a rare Ethiopian black opal to the endoscope camera examining Sandler’s colon. While we’re still pondering that connection, the movie’s off and running – and it never stops.

What inexplicable conviction drives Sandler’s fast-talking Jewish gem salesman Howard Ratner to believe that the best way of paying off his debts is to raise more cash and bet it on basketball games? Why should he be certain the heavy-duty goons pursuing him for payment will have endless patience instead of sticking the boot in? Why be prepared to risk marriage, home and family by setting up his shop assistant/mistress in a New York love nest?

All the signs suggest he’s heading for self-annihilation, yet Howard remains a live-wire reminder that chutzpah is a Hebrew word. His pedal-to-the-metal antiheroic trajectory hooks us irresistibly into the movie, even though he’s far from a conventionally likeable protagonist, and the unyielding cacophony of constant yelled dialogue plus glitchy synth score is tooth-rattlingly discordant throughout.

The Safdies, though, appear to have been building through their feature filmography to reach this zenith of confidence, where the sheer visual and aural tackiness of Howard’s world should repel us and yet we’re simply compelled to watch by a protagonist whose relentless determination to beat the odds is utterly relatable – even if we don’t know where he gets it from.

Sandler has worked the lovable schlump shtick to death in his own run of egregious box-office star vehicles, but this shows exactly what he’s capable of when aligning his genetic-level underdog appeal in service of a fully fleshed-out character battling tension-mounting plot mechanics. He’s perfectly cast, yet behind awful specs, stuck-on teeth and wannabe-cool wardrobe, he truly disappears into the role, blending in with surroundings that display the Safdies’ extraordinary feel for creating convincingly immersive street-level vérité through spot-on faces and places.

Basketball superstar Kevin Garnett, appearing as himself, deserves credit too for bringing serene conviction to his role, his belief in the mystic power of the Ethiopian opal echoing Howard’s own instinct that the stone will change his life. There’s a bit more Afrocentric cultural traction in Garnett’s take on it, compared with Howard’s questionable investment in the efforts of the miners he regards as “black Ethiopian Jews”. He mischievously dubs the stone’s extraordinary spell as “Middle Earth shit”, yet this inexplicable mystical element at the core of an otherwise micro-realist fresco adds an intriguing depth to the proceedings.

Here, at last, is a worthy companion piece to Darren Aronofsky’s Pi (1998), in which the Jewish protagonist’s search for a secret understanding of the universe played like a combination of visionary insight and dangerous psychosis. There’s surely a kinship with Sandler’s Howard Ratner, who approaches life like a tightrope-walker, where increased risk equals enhanced adulation and intensified self-esteem.

Is it all about a secular yearning for faith, or a cautionary tale about narcissistic delusion? Either way, this happy-scrappy, blackboard-screechy, mongrelly adorable piece of filmmaking is sure to stand as a signature achievement for both its directors and unforgettable star performer.

Related to Uncut Gems review: the Safdie brothers hit the sweet spot with this manic thrill-ride